If you want to visit three very different beaches plus a historic, yet active town all in one day, there are few islands that will serve you better than São Miguel. For starters, we wanted to check out the often mentioned Caloura beach on the south side of the island. It’s not far from Água de Pau, which we visited, and in some ways it’s hard to say where one ends and the other begins. 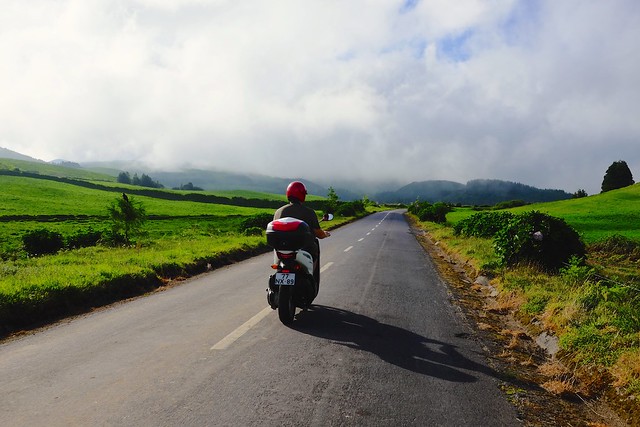 Riding through the inner portions of the island. 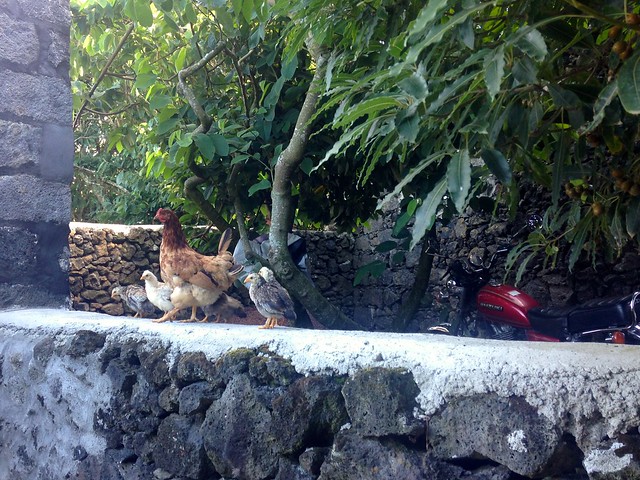 Chicks and bikes: the usual sights at our guest house before breakfast.

As it turns out, the beach in Caloura is not quite what I usually picture when I think of a beach. There is no sand or gentle shore, it’s simply a shallow bay surrounded by rock cliffs. There is a pier to which a couple of ladders are attached, and you do not walk into the water, you either use those ladders or jump in! The place is popular with local kids, and jumping is their preferred way of getting in.

Still, this place is not without danger: just today, what it was lacking in killer waves, it made up in poisonous jellyfish. That’s exactly what the lifeguards warned us about as we arrived. If you go in and get stung, they give you some potion. The protected nature of the bay makes it a great snorkeling spot, as lots of fish and other creatures casually roam around and do not get washed away. 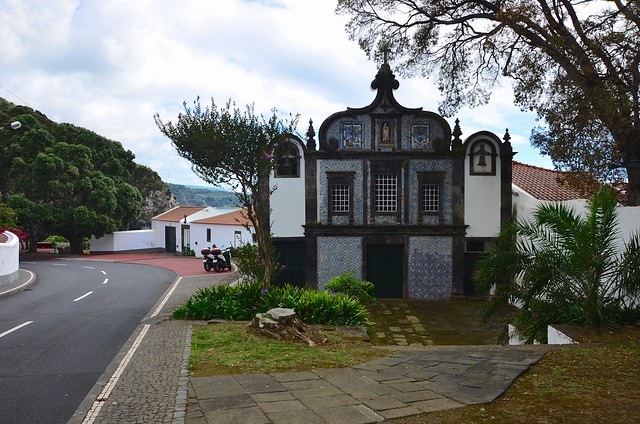 After a couple of dips, we figured there was time to visit another beach before lunch – Àgua de Alto. This one is more typical: exposed, sandy and with lots of waves. The sand was scorching hot, and naturally, I made the amateur mistake of running from the shore to the change rooms barefoot. 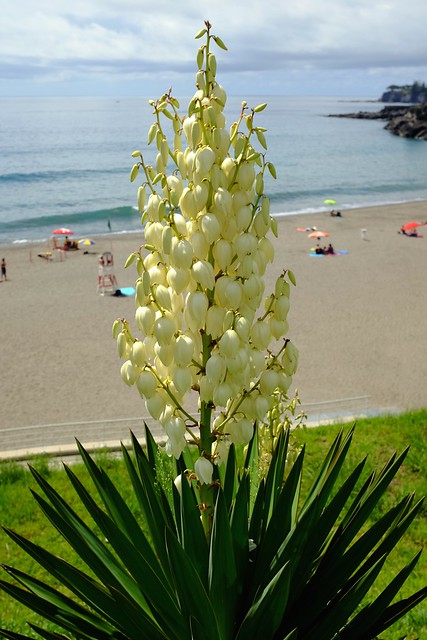 View near Àgua de Alto. This plant is about two meters tall.

Finally, it was time to visit Vila Franca do Campo, a town established in 1444 and still kicking. There is a small islet just a 5 min boat ride away that is a popular destination for those desiring even more variety in their beach experiences. Today, we only watched it from a distance as we ate a juicy fish in a seaside cafe. Looks like a cafe, but serves fresh catch of the day – my kind of establishment. For dessert, the proprietor suggested we try what he could only describe as a “small cake”. Let’s just say, his English might be limited, but his choice of small cakes is top notch. 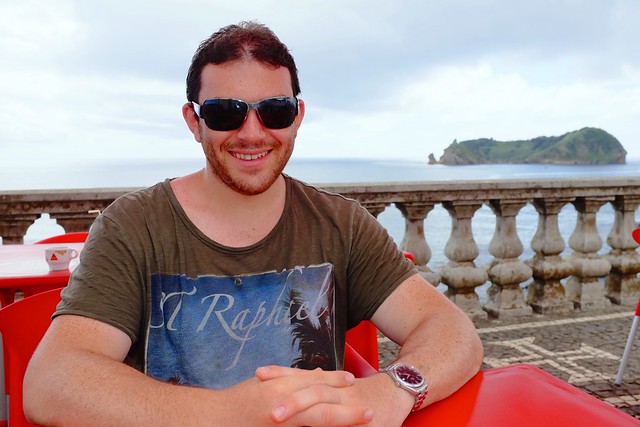 Waiting for fish to fry in Vila Franca do Campo.

We explored the town a little bit, and got an impromptu performance of juggling a single water bottle from a kid dressed in Spiderman attire. Meanwhile, people were working with the decorations of the local church – Igreja do Senhor Bom Jesus da Pedra. As it turns out, every tiny village in the Azores has an annual festival (usually in the summer), and Vila Franca do Campo had theirs just last weekend. We must have caught them at their fanciest. 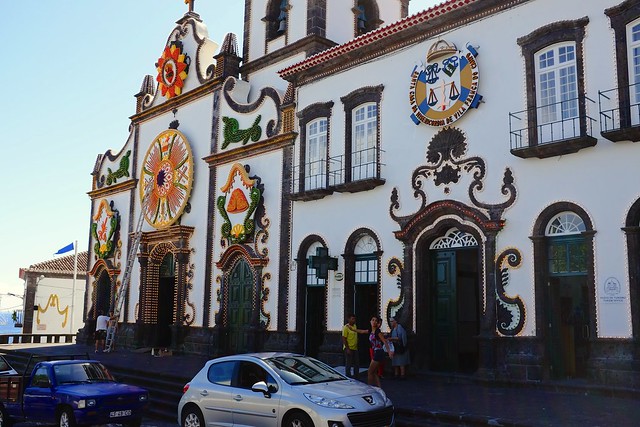 Turning on the light display at the Igreja. 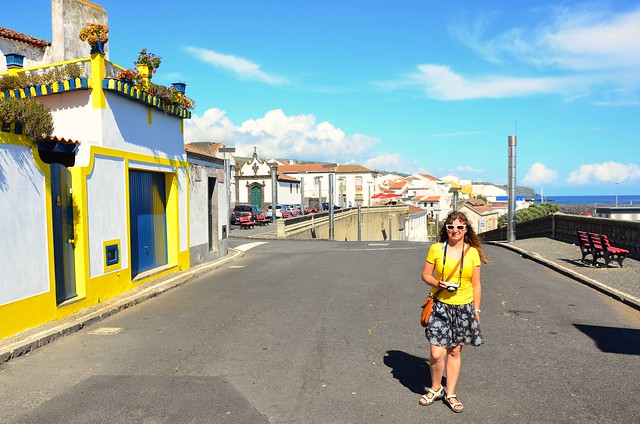 Walking near the waterfront in Vila Franca do Campo. 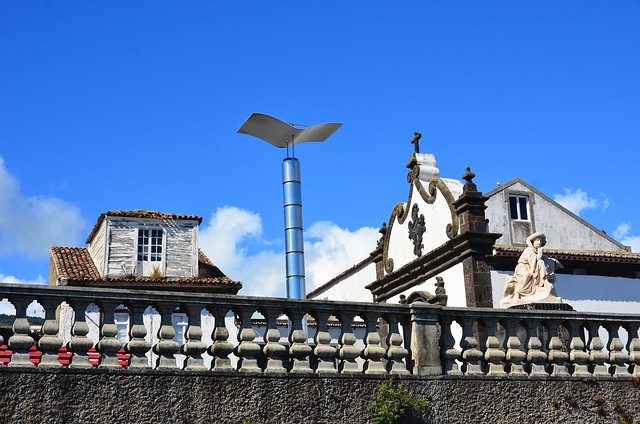 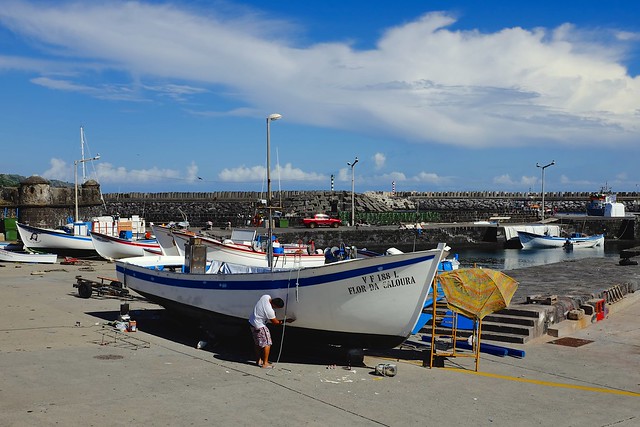 At the pier in Vila Franca do Campo. 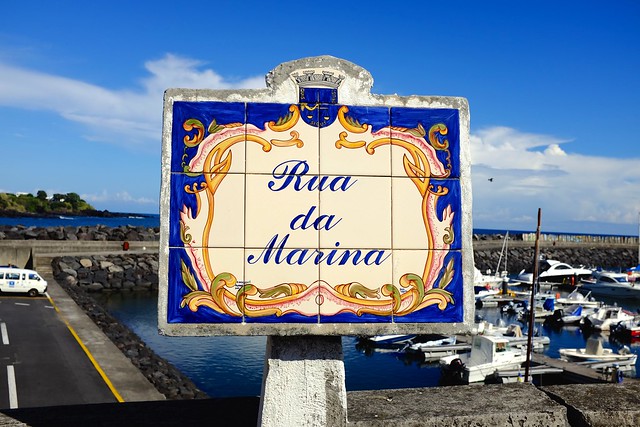 The elaborate Azorean street signs never cease to impress me.

Finally, the third and final beach of the day was all the way on the north side of the island, our favourite Maia. Sandy, but protected from the waves, it was a perfect place to wrap up the unfinished roll of film from yesterday’s dive. 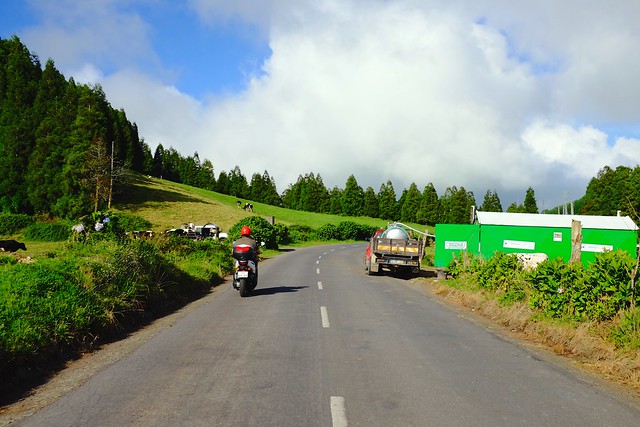 From Vila Franca do Campo to Maia, the road passes through the green inner sections of the island. Lots of cows, naturally. Here, they are about to get milked and their milk will follow to the nearest factory. There it’s packed and sent to supermarkets on São Miguel and other islands of the Azores. 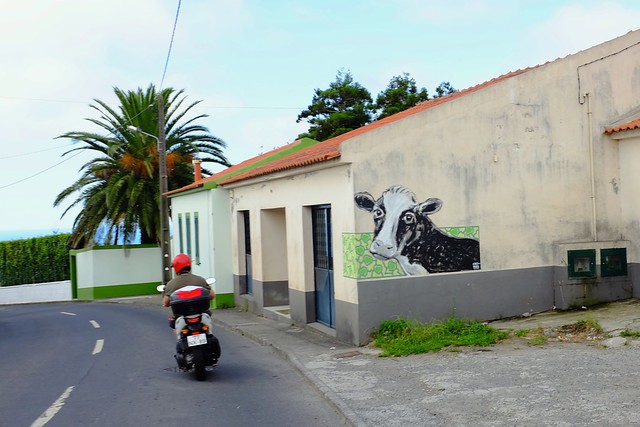 Hard to find a spot without cows on São Miguel. 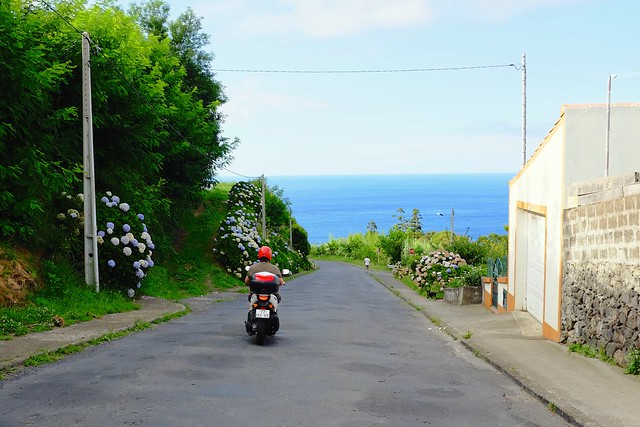 Approaching the north shore of the island. 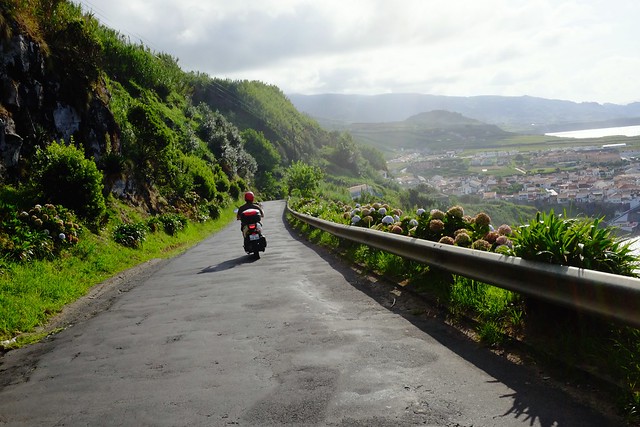 With the village of Maia right ahead of us, this is coastal scenery at its finest. 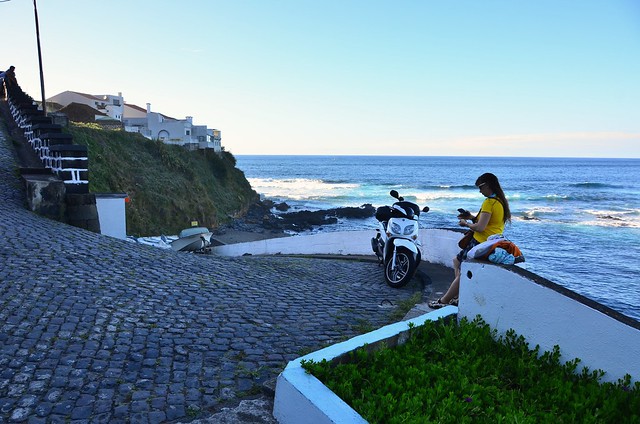 Relaxing after snorkelling at the beach below. 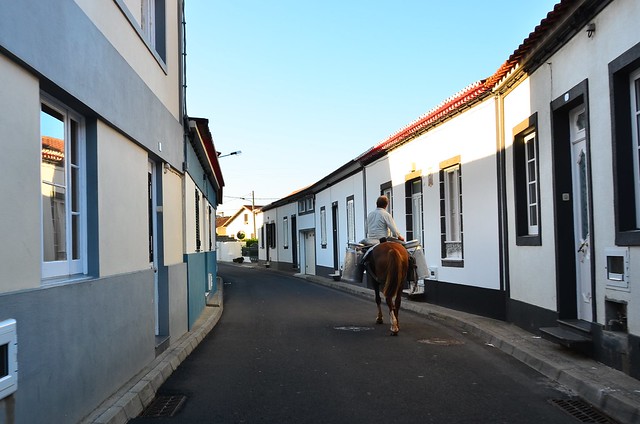 Now that I think of it, we must have shared the road with horses more often than with cyclists. 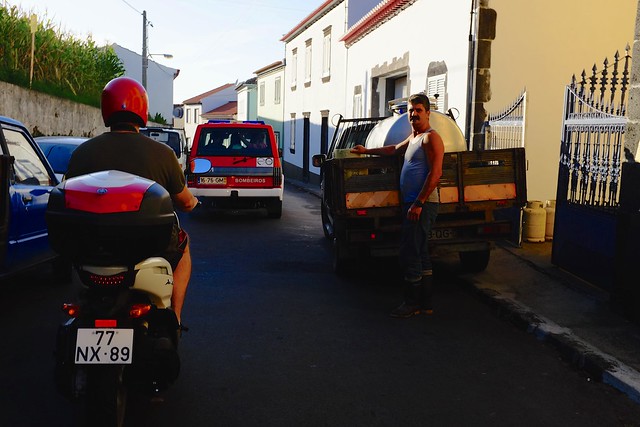 Traffic: between firefighters and a milk tank, it’s hard to squeeze through. 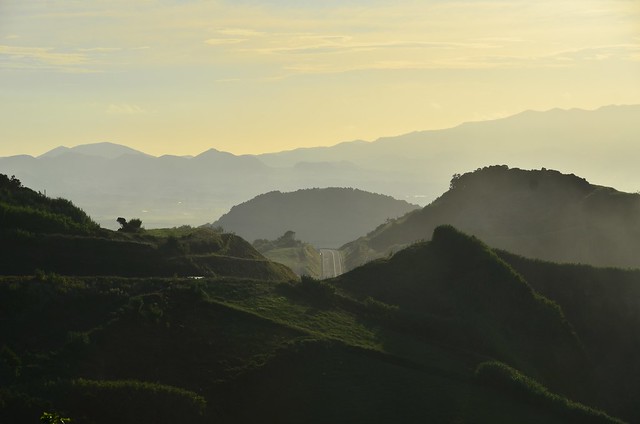 Sunset is near as the road winds through the rolling hills of São Miguel. 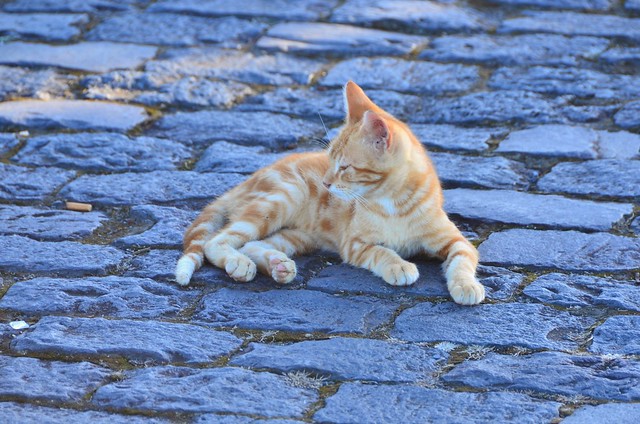 A cat, one of a handful, having a nap at a lookout point. 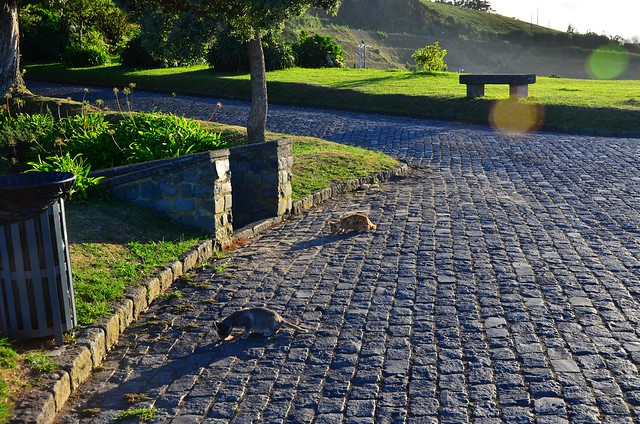 A kind soul shared their sandwich with the cats. 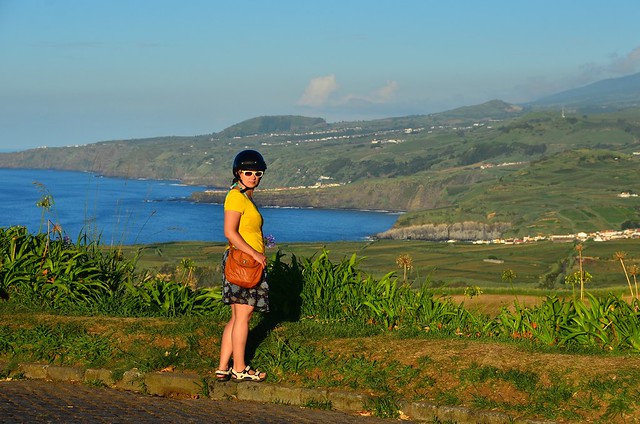 The view at the lookout point. 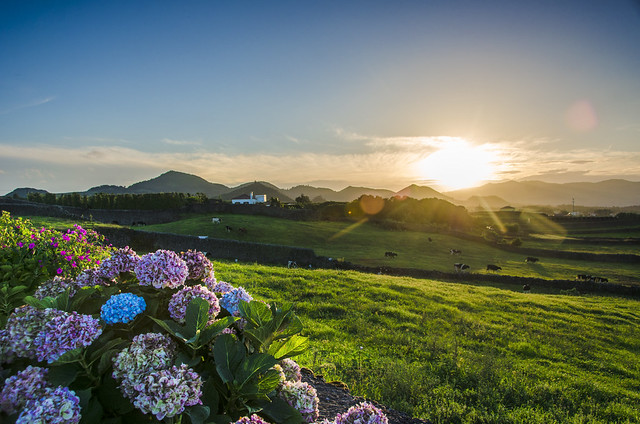 At this point, we were just a minute away from our guest house. The sun, the clouds, the mountains, the cows – everything aligned just perfectly for the final farewell to Tuesday.