Being perched up above the valley provided some of the most unique views of the trip: the fog rolling over the hills, slowly dissipating under the rising sun. All our things were generously covered in dew, so we decided to let it all dry out while we unpacked the drone and did a few flights around the area, flying over the fields and stalking the cattle. 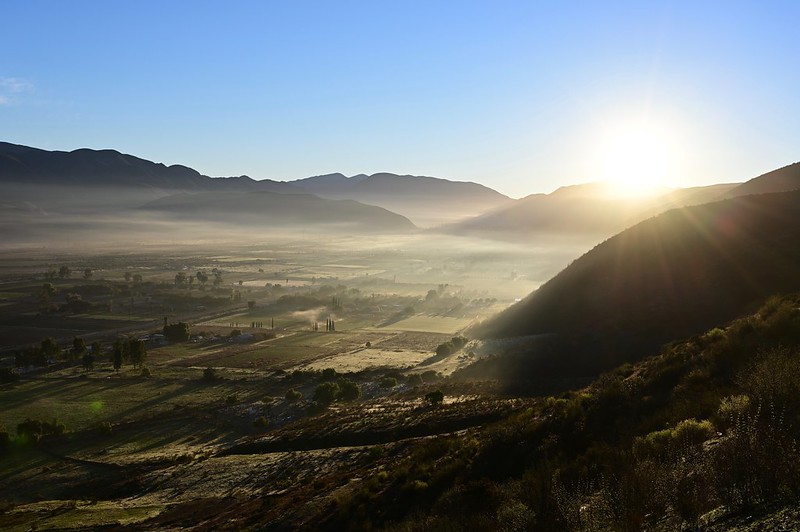 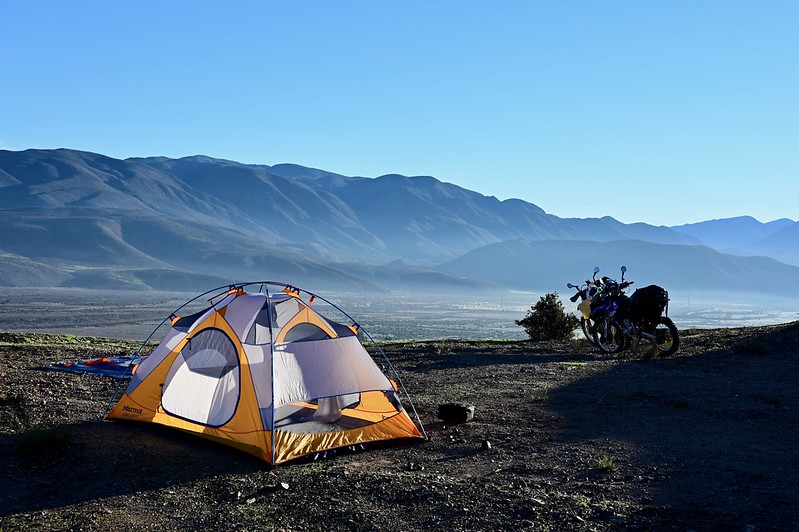 Campsite with a view

We noticed that we were not alone in this: some people in a jeep further down the road were also flying a drone. After a fancy oatmeal for breakfast, we finished the trail to the coast, and then turned back inland to find new trails. 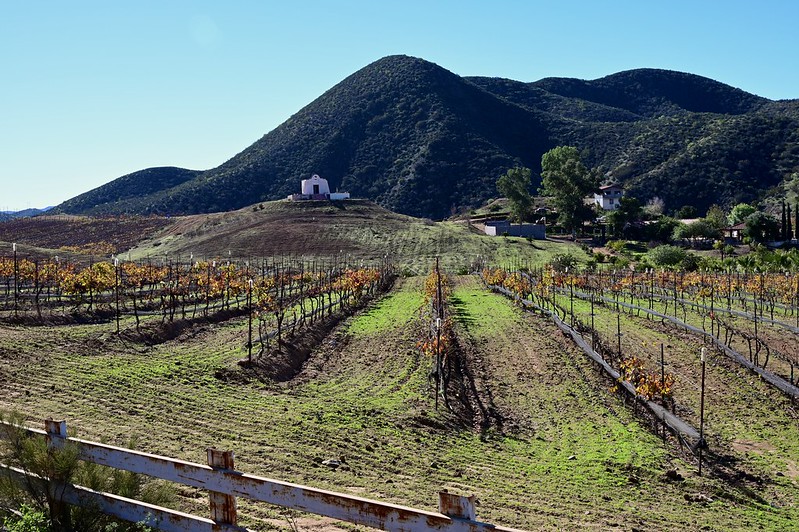 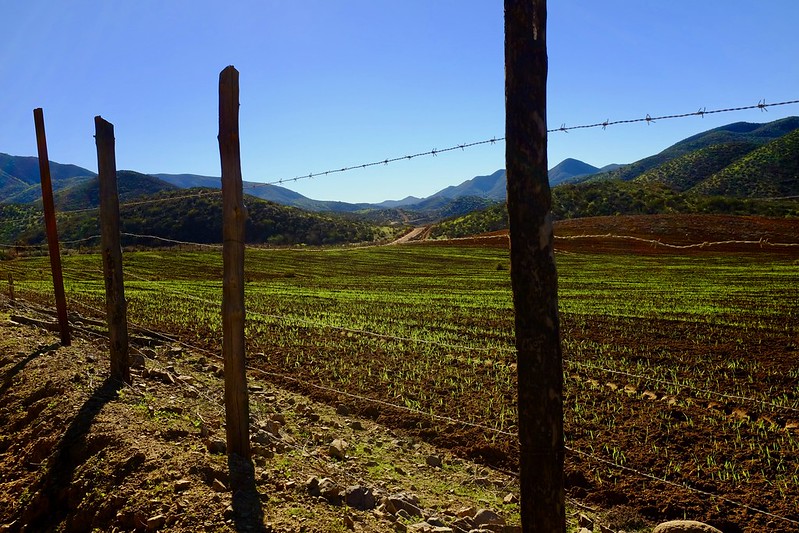 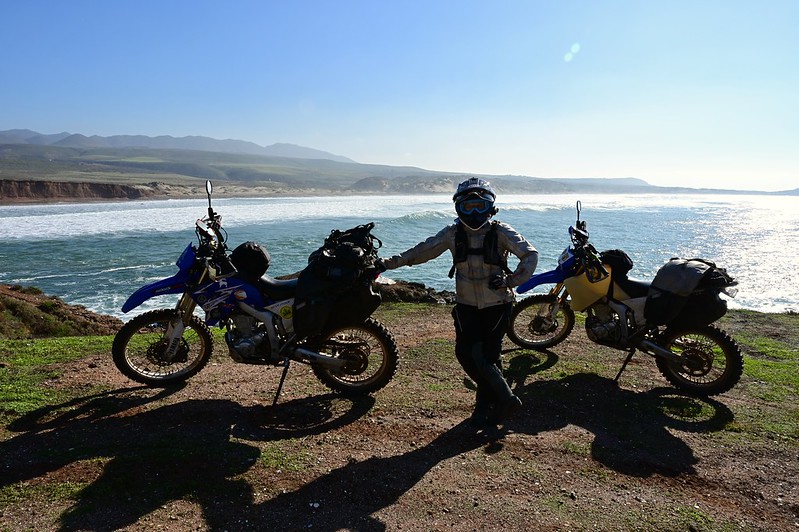 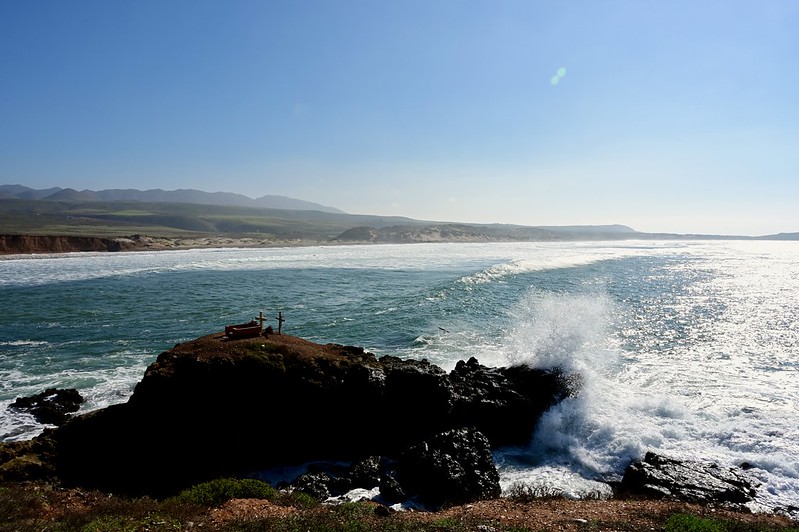 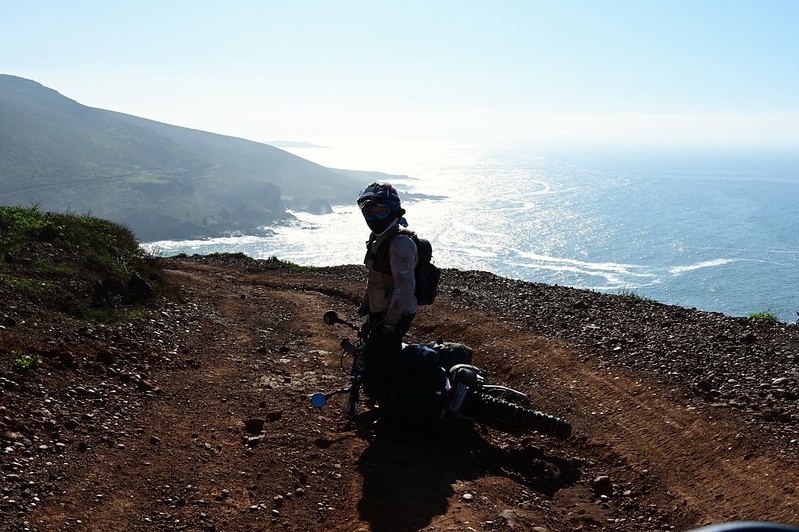 I drop it on the easiest spot, as always. 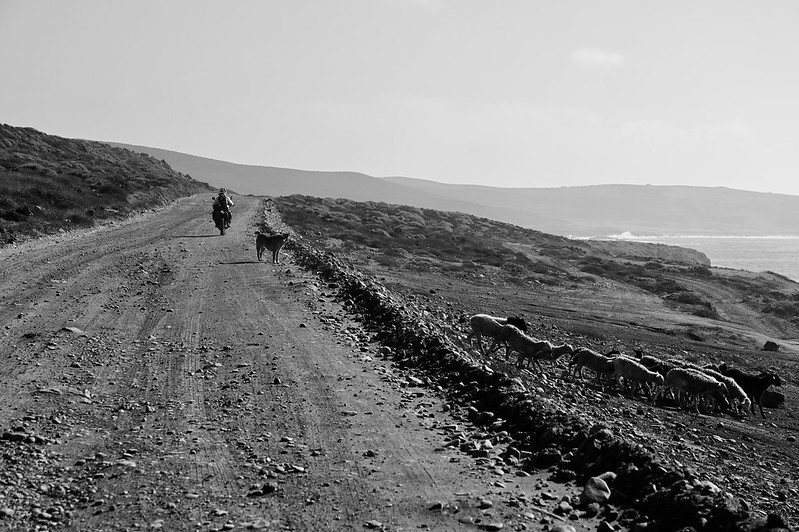 A shepherd and his herd.

My rough plan was to take some off-road routes and eventually make it to the San Pedro de Mártir observatory. The first trail I tried turned out to be a dead end, but the next one took us as far as we expected. This season was a lot wetter than last year – there was more vegetation, the greens were more vibrant and we even had to cross some streams. Some of the water crossings were surrounded by cows. I’m not quite sure if they were there as back up, or to laugh in case one of us didn’t make it through, but they seemed friendly. 🐮 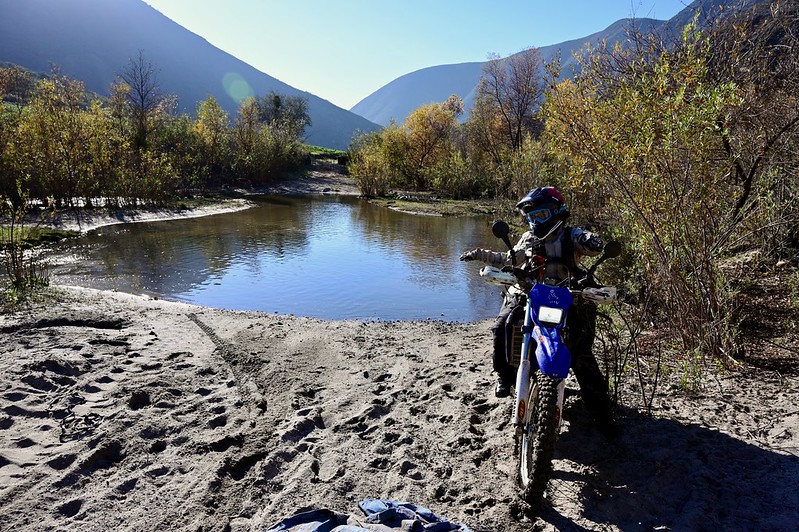 Can cows swim? That is the question.

At some point we met another traveller, Jack, on a unicycle. He had been travelling like that for a couple of weeks and apparently was making good progress. He mentioned that he may be the first person to attempt to cross Baja on a unicycle. After we parted ways, the trail got very steep, which made me really appreciate having a motor. Climbing all these hills using his own power must be exhausting. And balancing on one wheel while navigating the rocks and ruts – now that’s balancing. 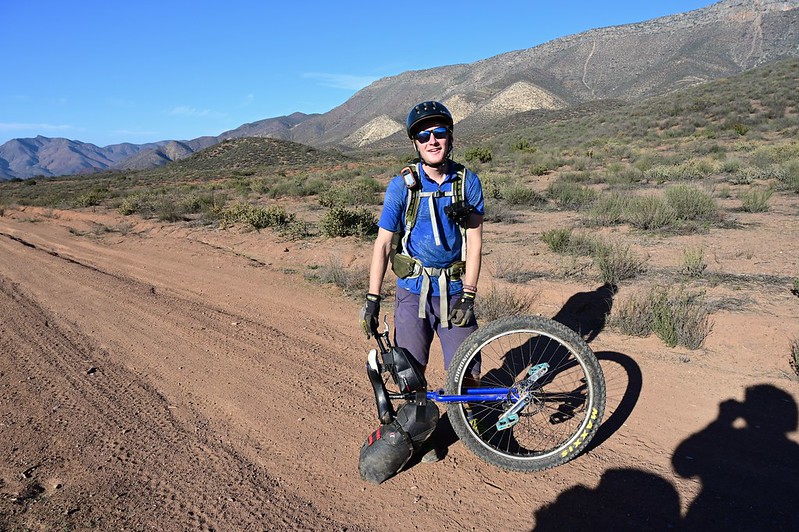 Jack, with his unicycle. That’s what I call minimalist packing! 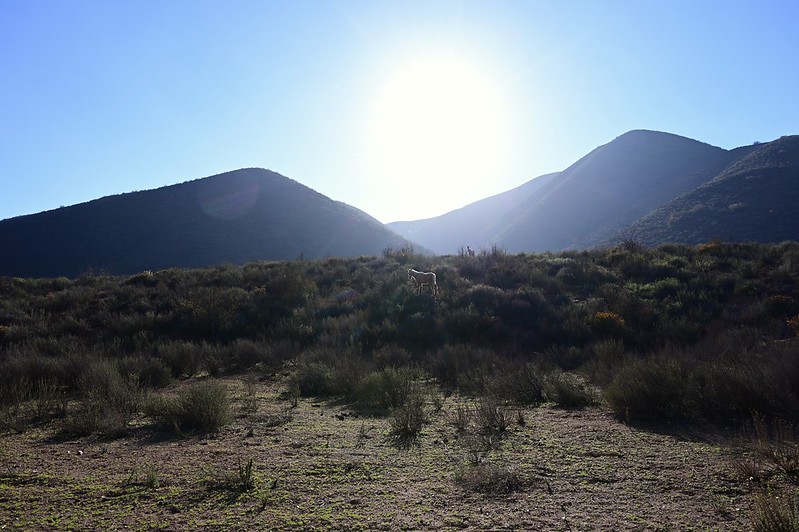 Horses, because this is Baja! 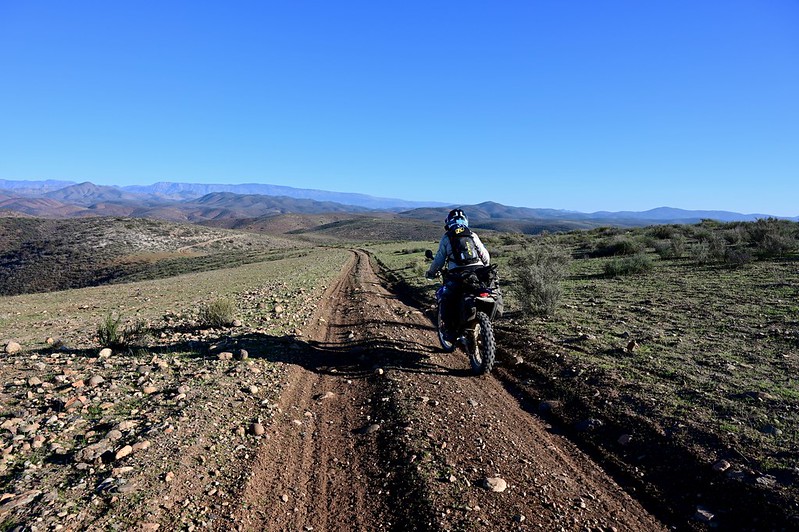 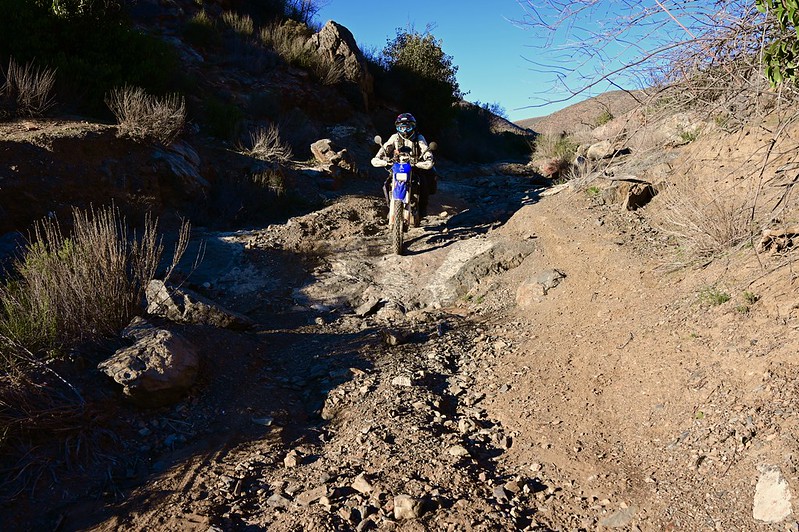 And down the mountains… 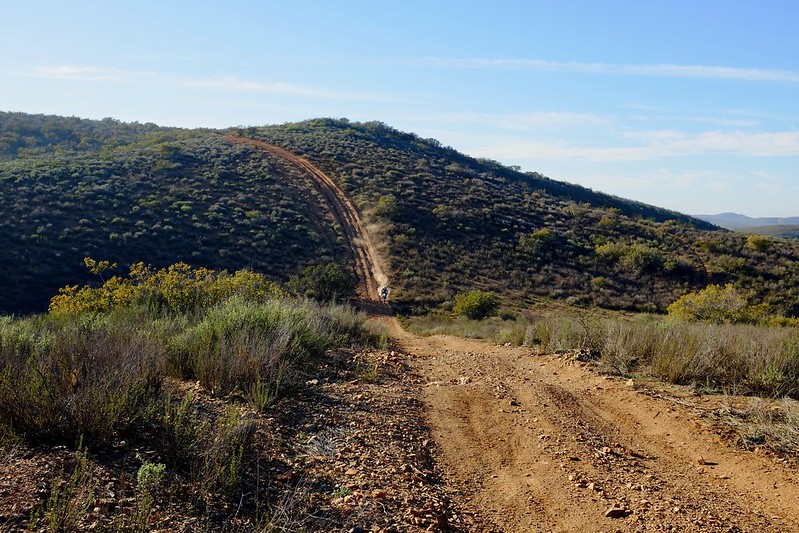 And down the mountains again!

As we got onto the paved road to the observatory two things happened. First, we noticed that in all directions there were mountain ranges upon mountain ranges. It was breathtakingly beautiful. Second, as the sun was setting lower and lower, the temperatures were dropping hard. I was doing some mental calculations and thinking how perhaps we can camp on top of the mountain, with these great views, instead of riding in the cold and dark night to the nearest town. I shared that with Alex and to my surprise he did not like the idea at all. He thought we would freeze to death. We stopped for photos many times, the vistas were just that mesmerizing. 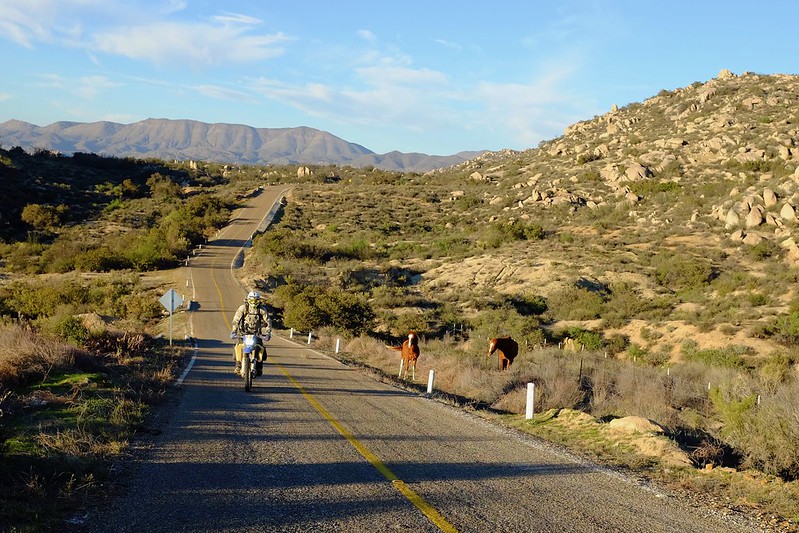 Why did the horses cross the road? To get a better view of the rider. 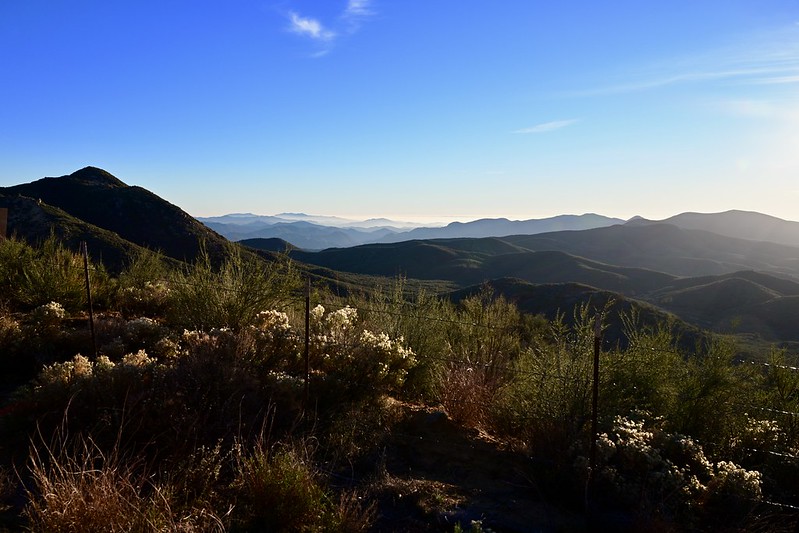 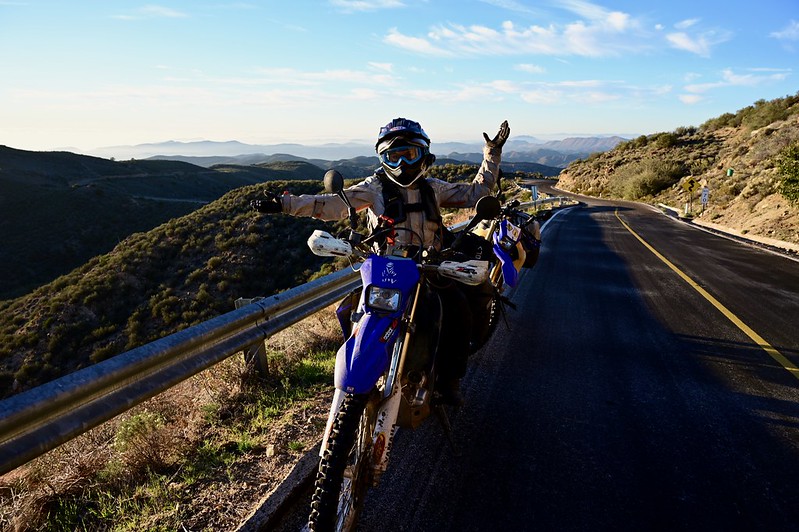 This is hands down one of the most picturesque paved roads in all of Baja. 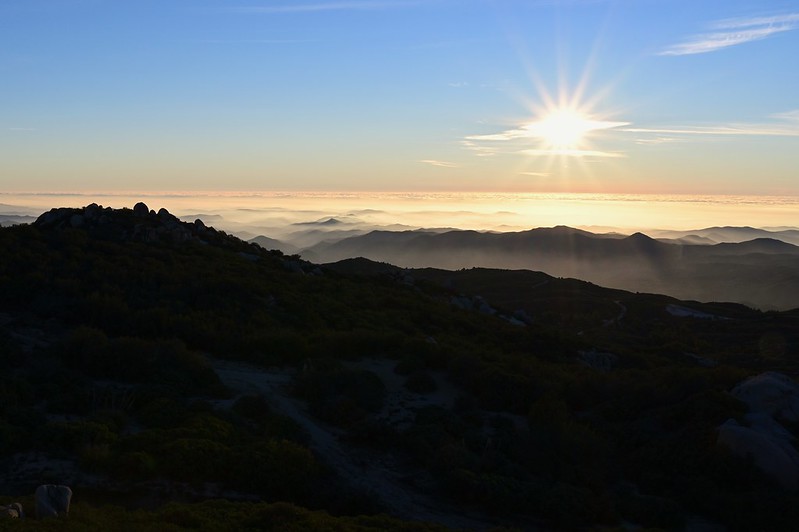 The sea of clouds. On a clear day, you can see the actual sea, of Cortez. And the ocean too, on the opposite side.

Finally after another turn I realized that we were definitely not going to camp here. Half the road leading into the ranger station was covered in snow and ice. It was 2500 m above sea level. Joking that it takes weird Canadians like us to find snow in Baja, we stopped to chat with the ranger and found out that it would be -2 ºC tonight. Not a good match for our +5 ºC sleeping bags. The observatory was closed for the winter so there was not much else to do except eat a snack, put on all the clothing we had and ride to San Quintin. 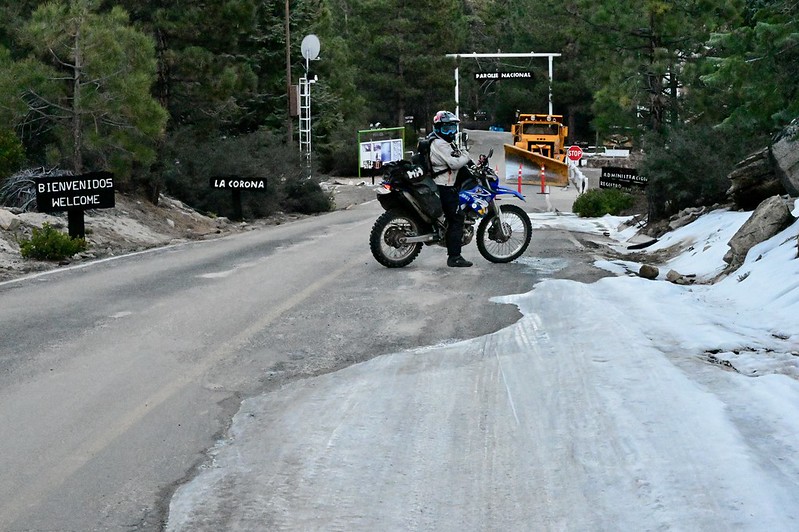 This is me dramatizing the cold. 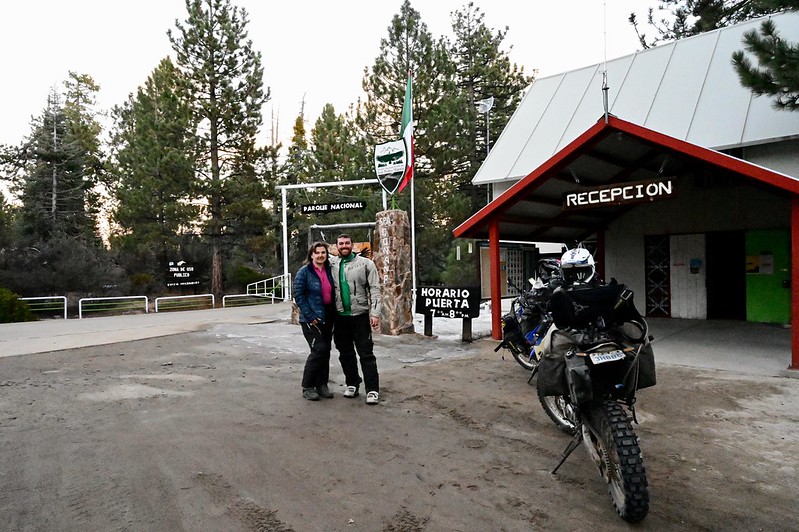 National Park entrance – no motorcycles allowed past this point. In better weather, I would have made an argument, but now, it seemed ok to just move on.

It was completely dark by the time we were off the mountain, but at least it was warmer. There was still room in the Old Mill hotel, but the fancy restaurant Molino Viejo, which everyone seems to recommend, but which we keep skipping every time, was closed for the holidays. The restaurant at the hotel was also closed, but they took pity on us and offered to share some of the food they had prepared for a family celebration. Roast turkey, mashed potatoes, cranberry jelly… We have seen snow on Christmas Eve, and feasted on a traditional American Christmas meal, what more is there to want? 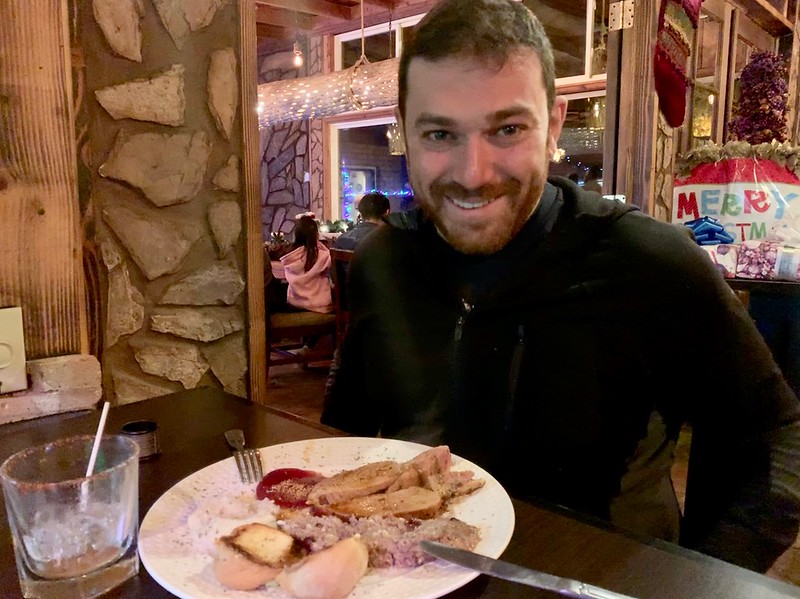