Our journey out of Death Valley began by heading for the very heart of it. Descending from camp, the first curious thing we found were the charcoal kilns. Used at some point to make charcoal for a nearby smelter, they stood there looking alien and inviting. Alex obviously had to ride inside of one. 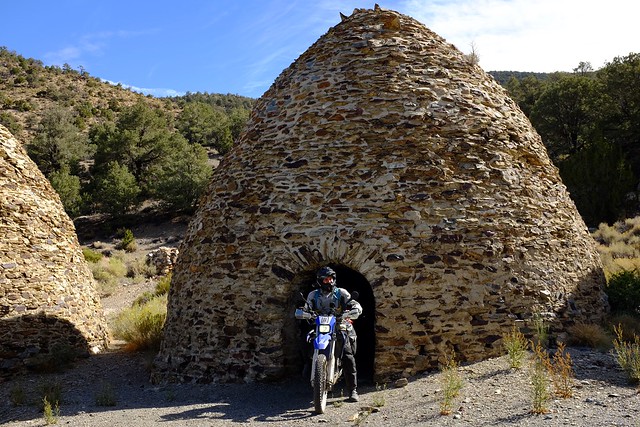 Temperatures were going up, up and up again, as we kept riding and wondering at more interesting things. 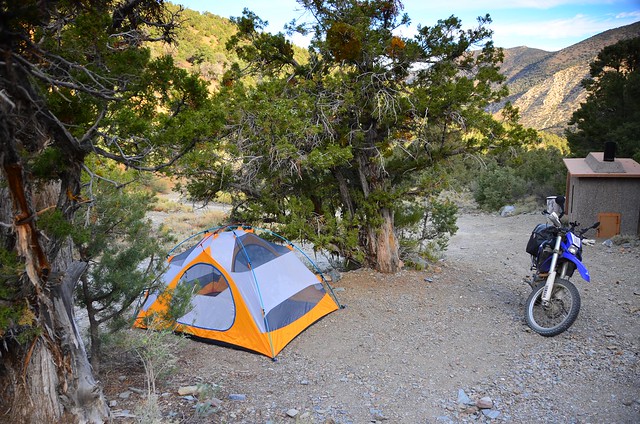 View from the Mahogany Flat Campground 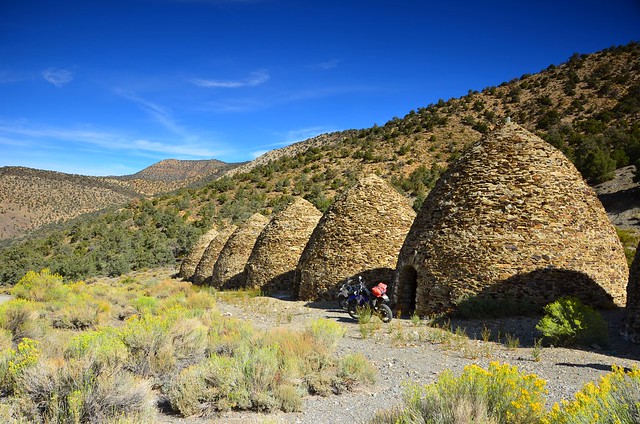 Charcoal kilns and the landscape of the national park 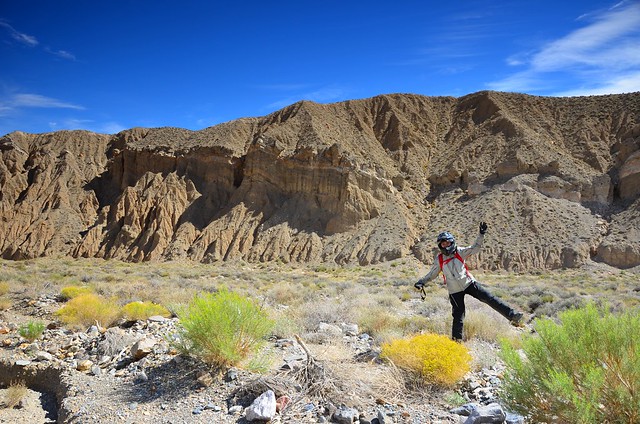 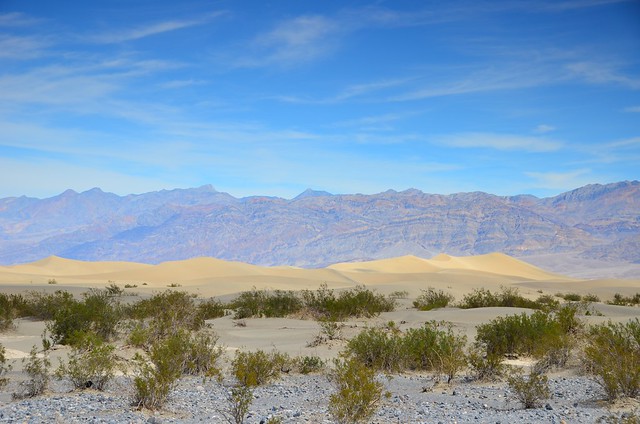 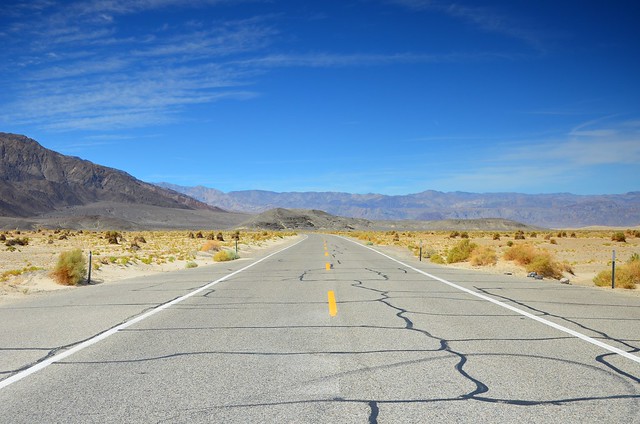 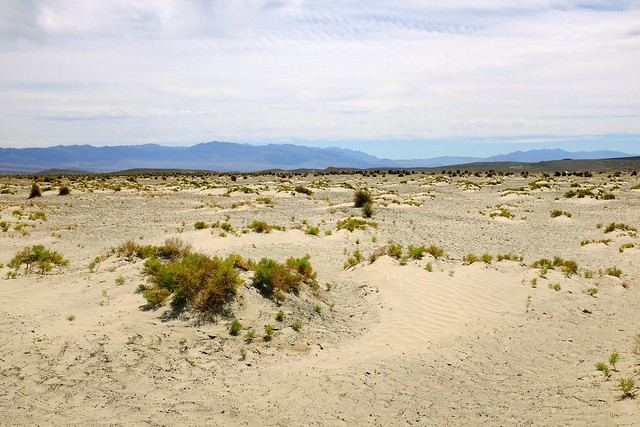 Sparse vegetation of the dunes

Since we were not carrying much in terms of food supplies, we decided to stop for breakfast in one of the few places that had such advanced services – Furnace Creek. It is close to the lowest point in the valley (and the world), and most of the time the hottest, too. I think officially the temperatures that day did not quite reach 40 ºC, but it was close. Just walking from the parked bikes to the diner was exhausting. Thankfully, the diner itself was air conditioned and we took our time enjoying that luxury. When riding, it felt like a giant hair dryer was pointing at us – although that did not quite prevent us from sweating. Even my phone felt that it was simply too hot. 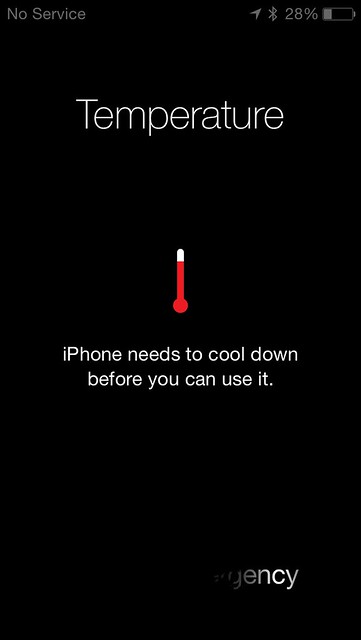 You and me both, iPhone.

One destination I wanted to visit before leaving the park was Dante’s View. This location looks like it doesn’t quite belong on this planet. From this vantage point you get to really see the expanse of the valley and the mesmerizing artistry of the Badwater Basin salt flats. 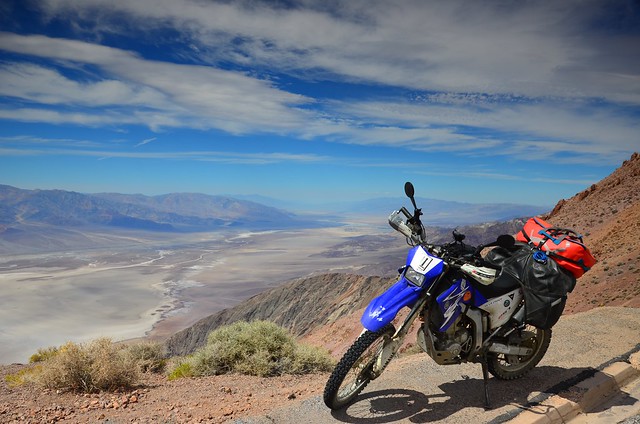 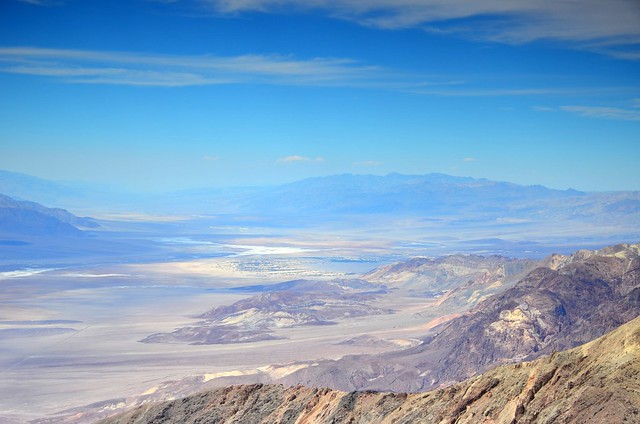 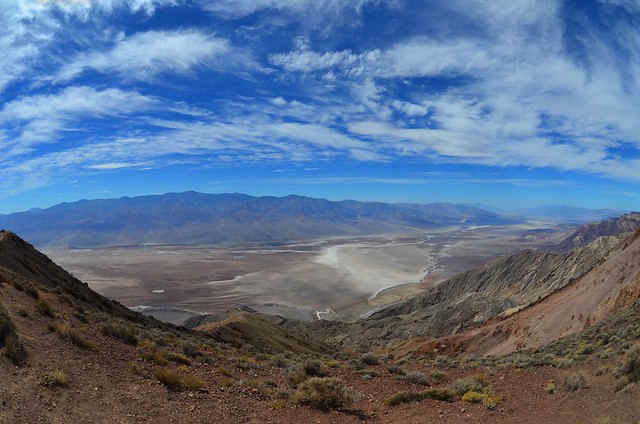 Outside of the park, we rode along the rather scenic highway 127, stopping to admire more salt deposits on the side of the road, which looked suspiciously like snow. 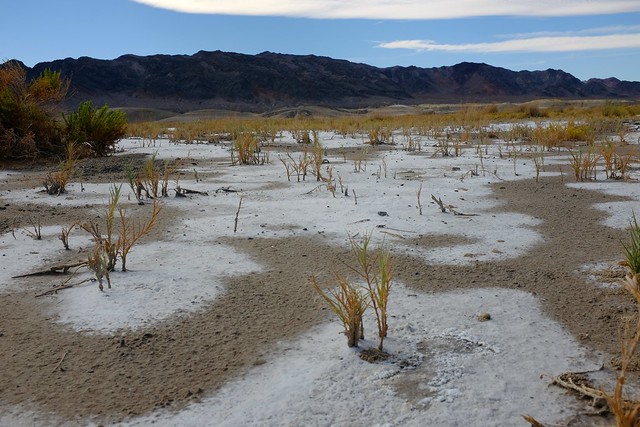 Salt deposits along highway 127, just outside of the park

Highway 127 comes to an end in the town of Baker, where we stopped to have some surprisingly awful greek food and to plan the rest of the day. At this point we were just a 2 hour freeway ride away from the Greater Los Angeles Area. The spokes shop we planned to visit the next day was in Azusa, which is a suburb north east of LA proper. When staying in a city, camping is not generally an option, and I could not locate any prospective hosts on Advrider either. There was a Marriott hotel I could book with points though, and I did. See, I plan ahead. I booked our stay over 2 hours in advance. As we left the greek diner and were putting on our gear in preparation for the long, tedious and soul sucking freeway ride, we spotted a weird sight on the road. A motorbike rider was towing something on a little trailer behind him. It was snow white, and it was kind of long. It was a casket. No, I did not take a photo.

As the light began to disappear, we kept buzzing onward on freeway I15. My XT kept buzzing and buzzing until suddenly it was buzzing no more. There was a pop, I pulled in the clutch and coasted to a stop on the shoulder. I kept pressing the starter button again and again to no avail. Alex tried to help me push start the bike, but that didn’t work either. Eventually we admitted defeat and called roadside assistance. Thankfully, we were only about 90 miles from our destination. While waiting for the tow truck, I asked for recommendations for a mechanic on Advrider, and received a good suggestion surprisingly quickly. Someone named Kelly came highly recommended and was about 5 minutes away from our hotel. After the lengthy wait we rode to West Covina, Alex on his WR, me with the tow truck driver. By the time we reached our hotel it was almost midnight. To say we were feeling miserable would be an understatement. But there was hope. There was definitely hope. 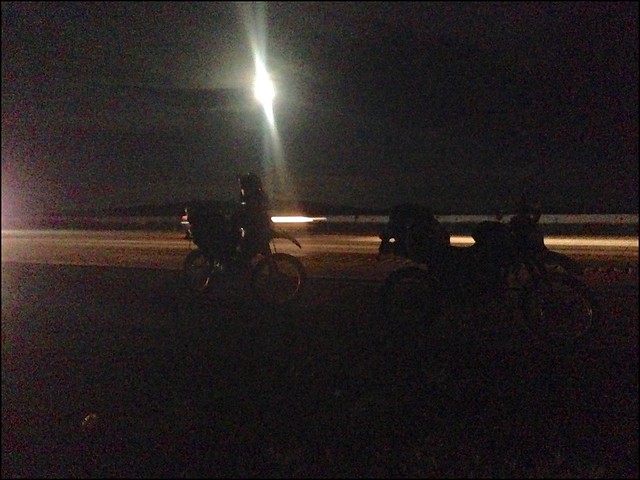 The wait is almost over