At least they have beaches in LA

There are worse places to get stuck in, I suppose. Death Valley would be one of them. A little known fact is that there was a time when I dreamed of being a movie star and coming to Hollywood. By the time we started this trip I was feeling the opposite, and was going to skip Los Angeles entirely. The joke was on me, here I was, involuntarily stuck in the City of Angels, betrayed by the blown pistons of a tired 225 cc engine. 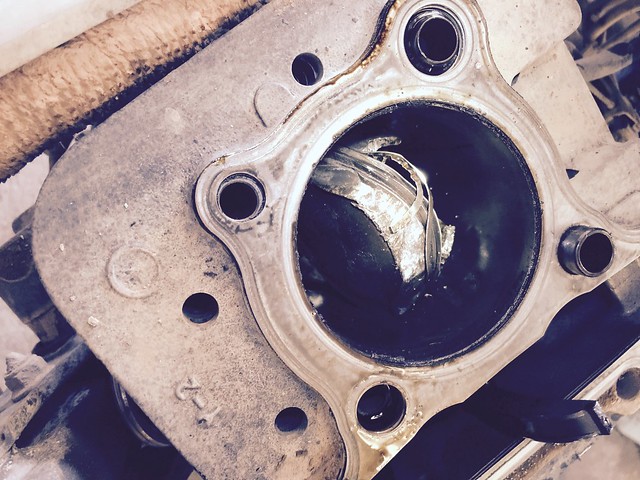 The broken heart of the XT225

In the morning I called up the highly recommended mechanic, Kelly, and arranged to come in. We towed my XT to his shop using a rope tied to Alex’s WR. Which got stuck in the chain and ripped apart mid way. Rookie mistake. Kelly spent at least 30 minutes explaining to us how he wanted to take a day off and will not look at the bike until tomorrow. Then ended up taking the thing apart and sending us photos with the diagnosis in the next few hours. I don’t know much about engines and pistons but those photos did not look good. Estimated prices and timelines were to follow the next day.

As a plan B, we started thinking of getting a replacement, and quickly settled on the idea that if we were to get another bike, it would be another WRR. Better the devil you know…

Our enthusiasm for that idea got dampened a little when we noticed that the local prices for used WR250Rs were almost double what we would be able to find in Ontario. Must be due to all this wonderful weather and the ability to enjoy riding year round…

Fixing the XT started to seem like a possible way out, except one of the parts it needed was backordered for weeks, and that forced our hand right there. Found a good match for a bike, thankfully already with many of the necessary accessories (such as the larger fuel tank), and began to realize just how idiotic California DMV is. We ended up paying double tax on it – to California upon purchase and to Ontario upon import. It takes a lot of money to keep the ocean waves rolling and the mountain sides sloping.

It sure was fun though sitting 2 up on a bike in a drive through ATM (yes, that’s a thing), withdrawing cash in $500 increments. The bank probably thought we needed it for strippers and beer, because each batch came in a varied set of $100, $20, $10 and $5 bills. The woman counting the money at the dealership did not bat an eye. 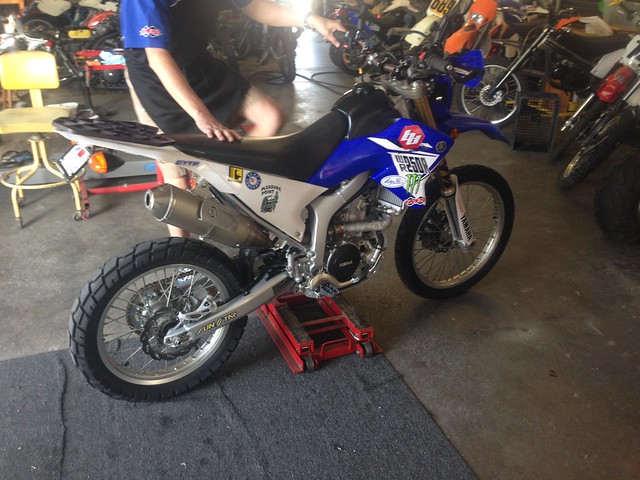 The new WR250R came in for a last minute tire change. It had a minor but very annoying issue of cutting out power unexpectedly on the freeway, which seems to be linked to its fancy aftermarket exhaust. I’m pretty sure it’s temporary, but it’s a work in progress…

The meaty parts of the XT were taken off and promptly sold off, and what was left behind got picked up by a local rider who was a character worthy of a whole other story.

Speaking of the reason why we were heading for LA in the first place – three spokes in the rear wheel snapped. That’s a funny story too. The spokes shop agreed to fix them, but then they cracked the whole hub doing so. We ended up having a highly educational conversation with them about spokes and hubs and rims and life and the universe. By that time we were only mildly upset about the whole thing, since the bike was not going to go anywhere under its own power anyway.

The silver lining to this ordeal is that on most afternoons we battled the insane LA traffic and made our way to one of the numerous beaches. Some of them were so busy there was literally nowhere to park a motorbike, but just a bit further north or south of LA proper the ocean was just as nice, but the space on the sand was ample. Looking west, sunsets were amazing.

Speaking of traffic and the chaotic web of freeways covering the LA metro area – it’s unmatched by anything I’ve encountered before. It’s not anyone’s idea of fun, but at least you can lane split without feeling like a criminal.

One evening we decided to skip those pesky freeways on the way to the hotel (which was in West Covina, way out from the shore) and see the city from the ground level. After riding through the chill and beautiful Santa Monica, and the upscale financial district of LA with its skyscrapers, fancy restaurants, exotic cars and men wearing actual ties we crossed one more street and ended up in Skid Row.

I have seen homeless people and beggars before. I have seen drug addicts and lived in a society where the marginalized were left to fend for themselves, because everyone was just trying to stay afloat. But never have I seen or imagined that such over the top privilege and wealth can exist in such close proximity to over the top poverty and desperation. Just a few days ago I was sleeping in my tent in the middle of one of the most beautiful places on earth, on the shore of the Merced river in Yosemite, feeling lucky to be able to connect with this grand nature. Here they were, thousands of people sleeping in tents on the forsaken streets of Los Angeles. The stereotypical American smiles were nowhere to be seen. I wanted to take a photo, but Alex steered me away from that. When they say there is wealth inequality in the United States, you probably can’t really imagine just how stark it is. I was glad to be leaving this city the next day. I had a choice and the means to execute it.

Alex was riding the newly purchased WR250R, and I was riding the older one, because it could be set much lower and allow me the possibility of not falling every time I needed to stop. This is sea level, and it’s all up hill from here. 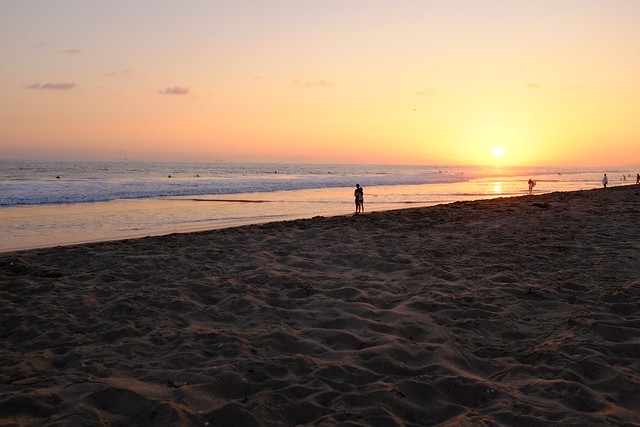