One of my favourite times in Bahía de Los Ángeles is early morning, just as the sun rises over the bay. Before even having breakfast, we headed to the beach for a relaxing walk. It quickly reminded me why I keep coming back to this little village. It is not only peaceful but also incredibly beautiful, even by the high standards of the Baja scenery. 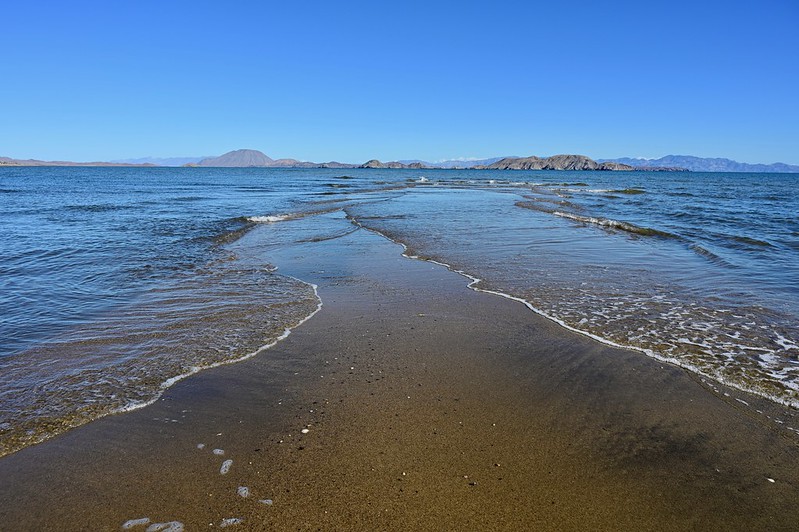 The slender sandbar gets caressed by waves

This day we were going to head to San Francisquito – a beach that’s only 130 km away by a scenic, fast flowing trail. We had plenty of time to spare, and were still leisurely sipping coffee at 11 am when Matt and Anna zipped by on their way out of town. They noticed us and stopped to catch up. They were planning to reach the same spot that afternoon, so we would definitely see them again. 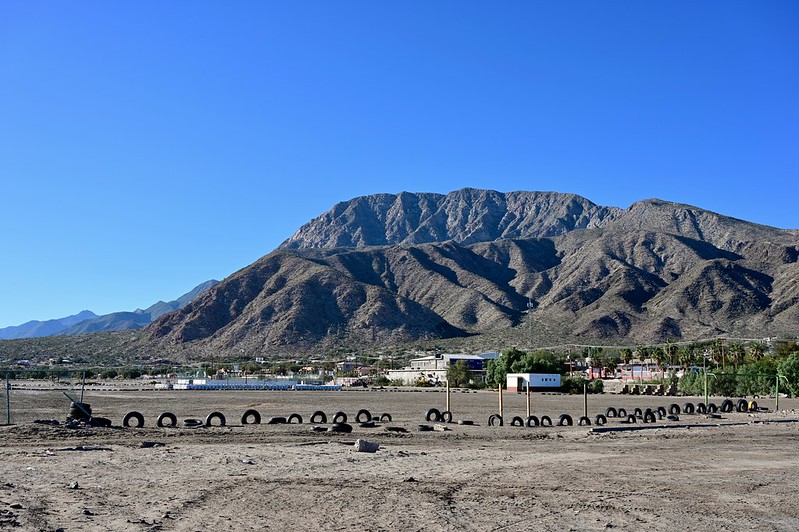 The town and its mountainous backdrop. 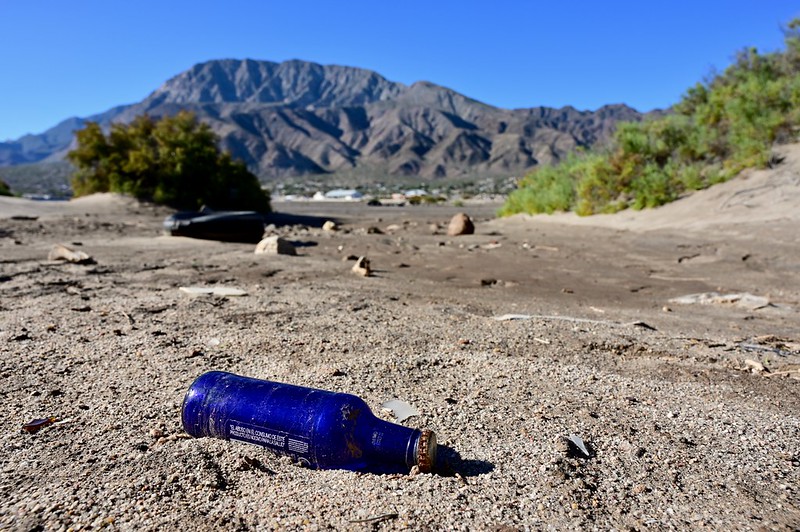 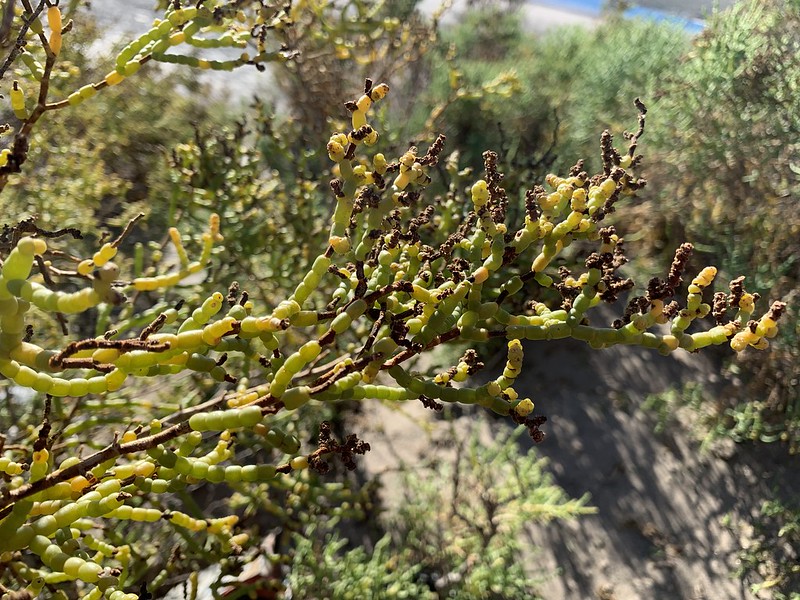 The curious flora of the bay 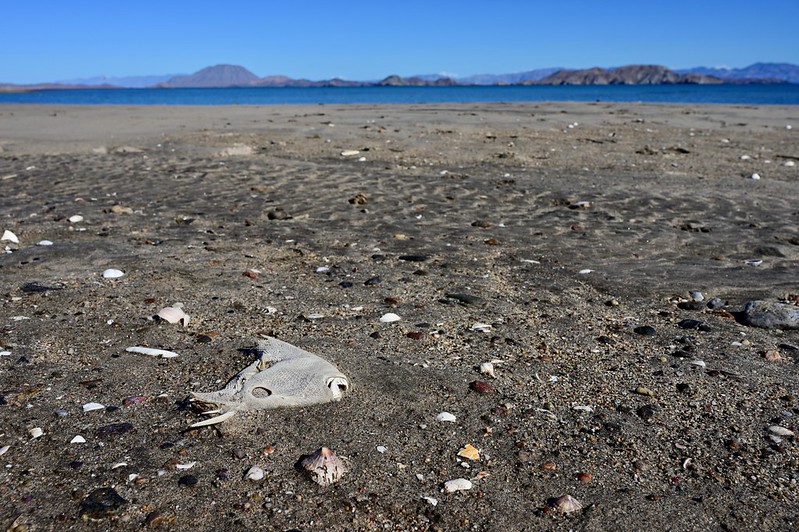 The route from Bahía de Los Ángeles to San Francisquito was spectacular. The desert was green and blooming – the trail was set in a valley which was retaining a lot of moisture from the recent storms, so the scenery was very un-desertlike. This caused us to stop multiple times for photos – and annoyed one of the cyclists that also wanted to traverse this route. We would pass him, carefully slowing down to reduce the amount of dust our bikes were kicking up, then come to a stop a few hundred meters ahead, take out the camera, pose, frame, shoot, at which point he would pass us, we would smile and wave, a few minutes later we would start again, pass him, then rinse and repeat. 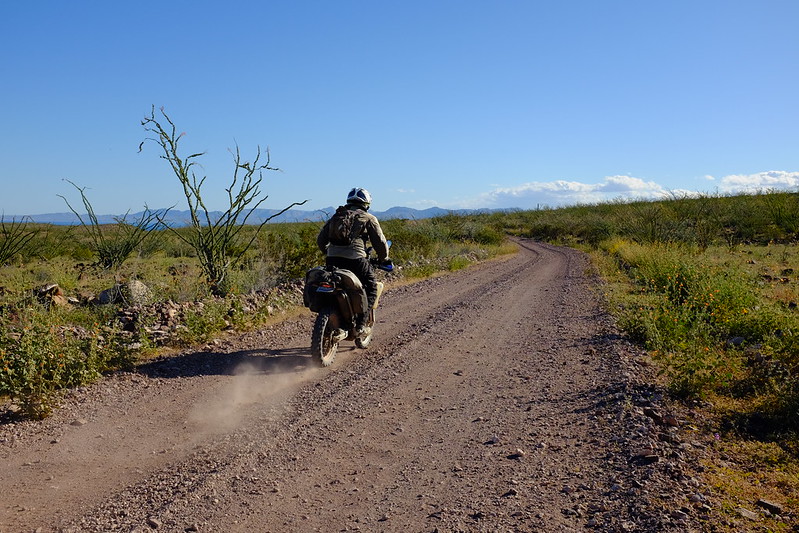 The fast track out of Bahía de Los Ángeles 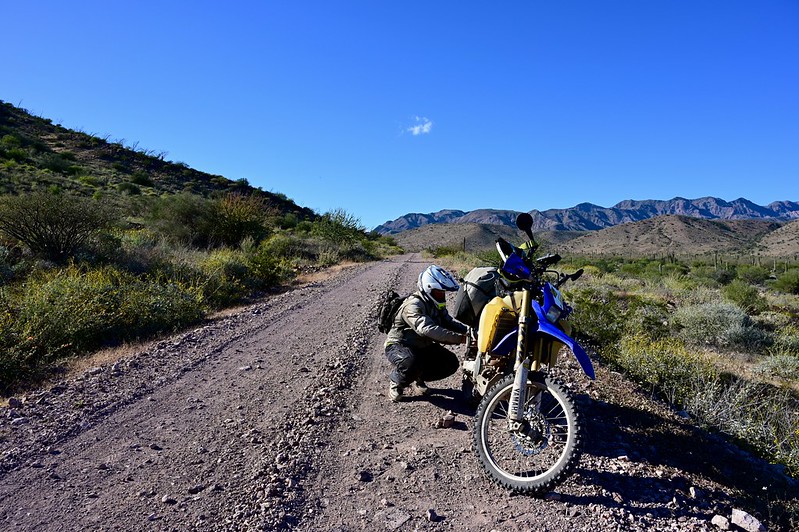 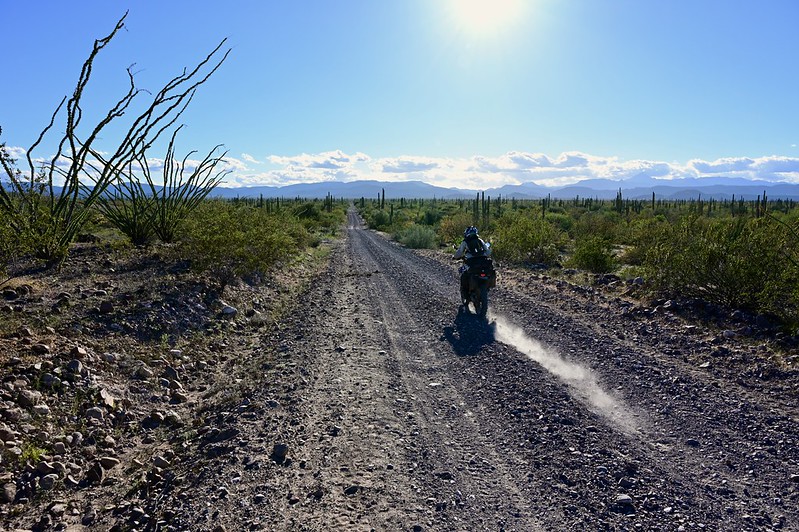 Riding through the green desert.

Something magical happens as the mountains separating the trail from the Gulf of California shrink. When you get that first glimpse of the water far on the horizon, it seems the landscape couldn’t be more perfect. The deep blues of the sea never cease to amaze me, no matter how many times I see them. And then you climb another hill, and lose sight of it, but only for a little while. 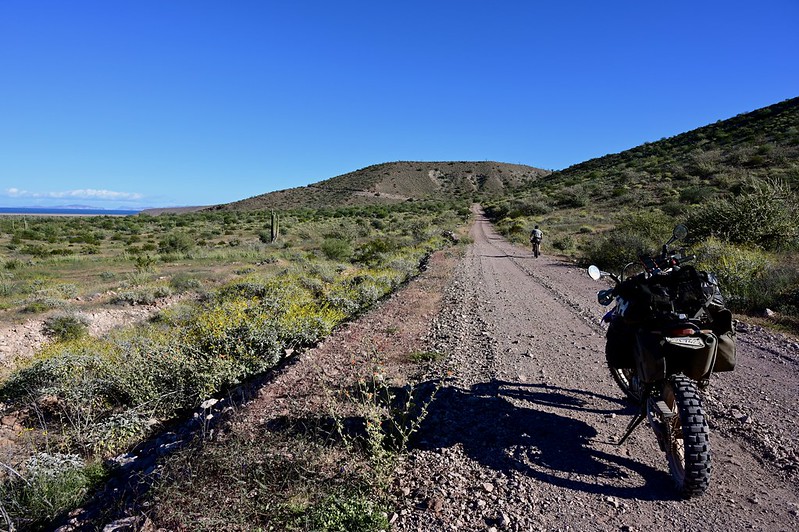 The strip of deep blue water in the distance, and the long suffering cyclist just ahead.

I’d like to say that with the trail being so easy, I did not even drop my bike, but that was not the case. Of course, it was in the most trivial way possible. I stopped on the side of the road, ahead of Alex, and settled to take a photo of him coming up a hill towards me. Except he took a different route than I anticipated, startled me, I lost my footing and the bike fell. So it was completely his fault. But then he took us on a detour to a beach where turtles used to hatch, and totally redeemed himself. 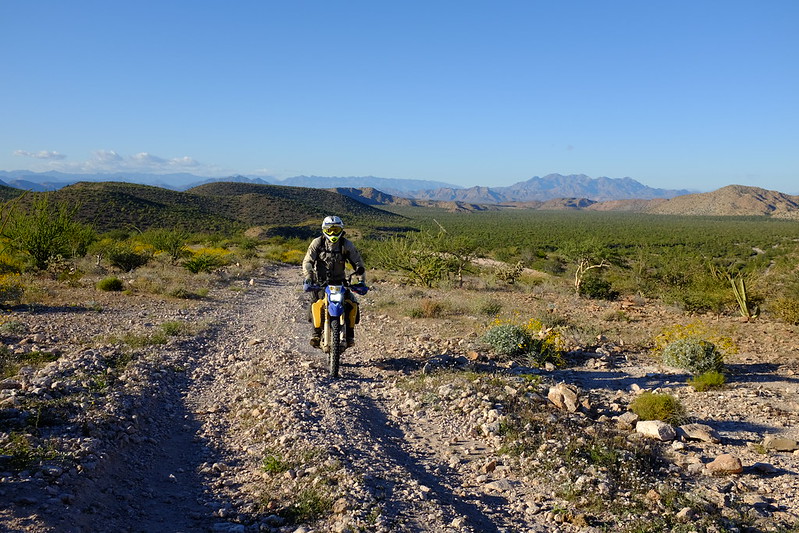 The picturesque hill on which I dropped my bike. 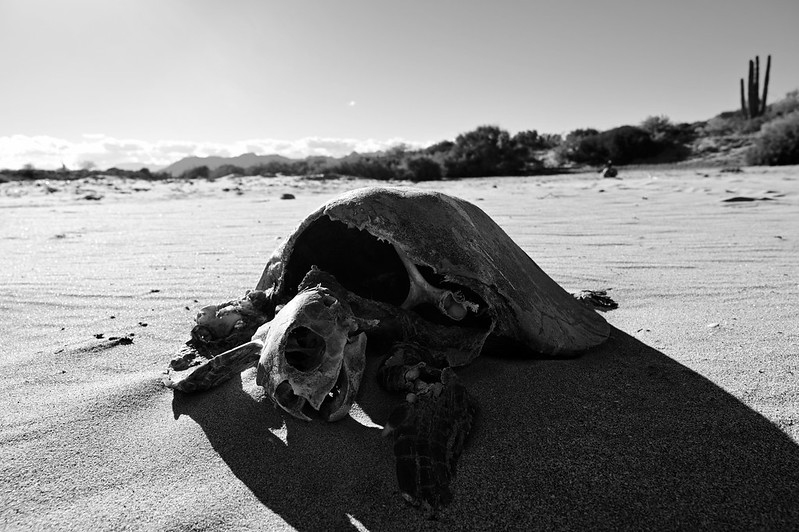 The turtle skeleton. I call her Betsy. 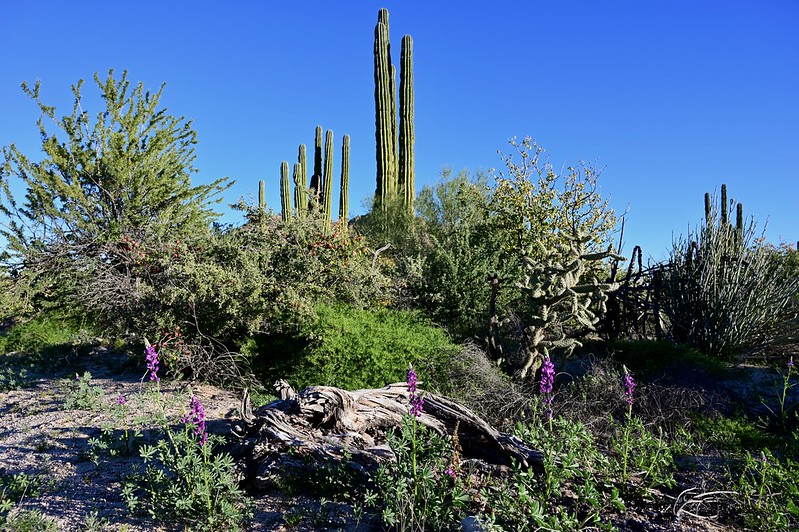 The blooming desert is the best kind. 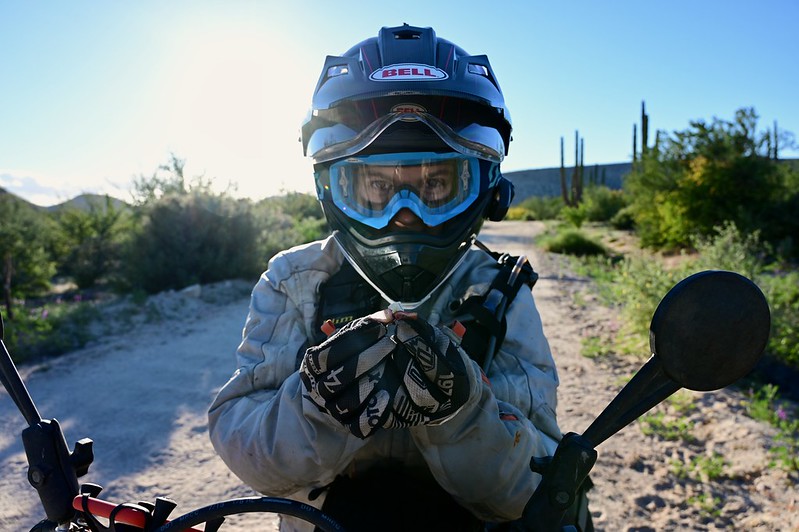 We reached San Francisquito before 4 pm, which left us plenty of time to drink ice cold coke, eat fish tacos, talk about all sorts of things with Matt and Anna, and observe the changing colours of the Sea of Cortez as the day turned into night. Matt pointed out how unusual it was to see the sun set on the opposite side of the water – unlike on the Pacific, which we were all so familiar with.

Once it got completely dark, the stars came out in full force. We just couldn’t go to sleep without enjoying them for a little while. 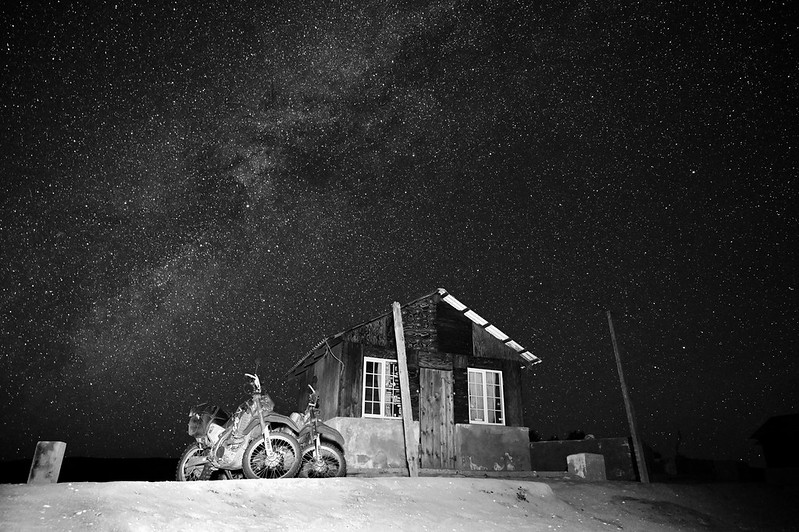 The milky way over the cabaña.

As we were getting ready to sleep, I noticed a tiny scorpion on the wall. It was only 5 cm or so in length, and as I read later, there are no venomous ones in the area. Yet at the time we had no internet connection, so I didn’t know that. After being thoroughly photographed, the scorpion was firmly squished with my boot. 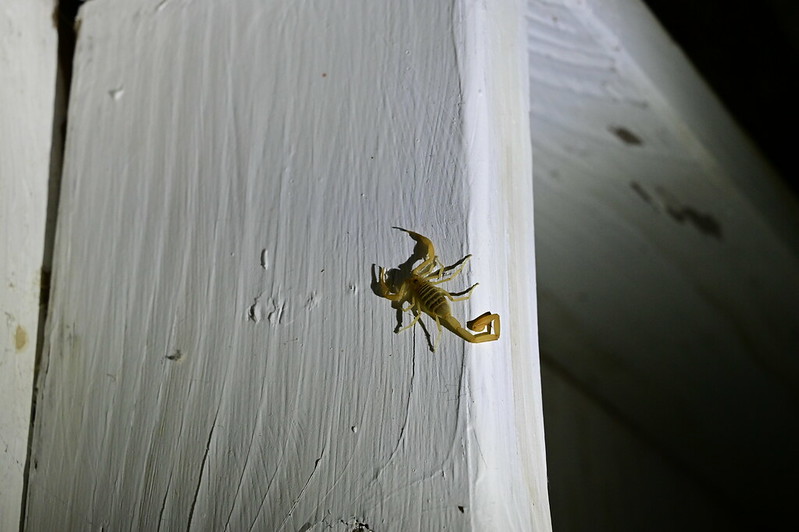 The deadly scorpion lies in wait.