Hot and Smoky in the Owens Valley

Several things caught up with us today. Aside from picking up Alex’s cellphone from the restaurant (yes, it was patiently waiting all night) and seeing a dentist to take care of my tooth, we also visited a motorcycle mechanic to inquire about the oil disappearing from my motorcycle. In other great news, the whole town was covered in a smoky haze due to nearby wildfires. 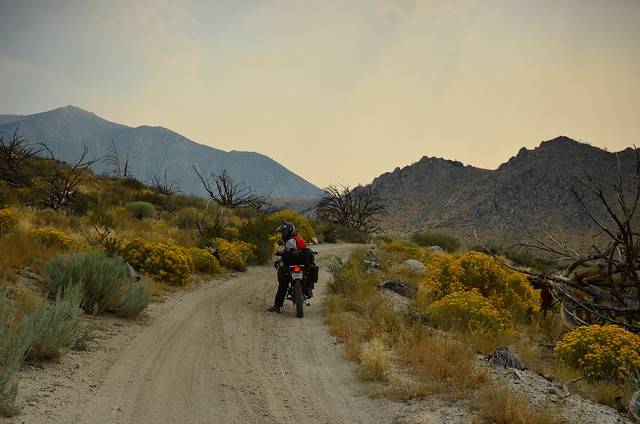 The mechanic in town was convinced that my bike is junk and won’t make it back to Toronto. Said he’d be amazed if it made it as far as Utah. Said it’s meant for grocery runs, not cross country trips. Never mind people like Lois Pryce, who made it from Anchorage to Ushuaia on the same XT225. My bike sure has some problems, but I had no doubts about its capacity to bring me back home.

The visit to the dentist was much more enjoyable (here is a sentence I never thought I’d type out loud). The doctor was very casual and non-alarmist. Removed part of my tooth that came loose and told me to get an implant done on it when I finish this trip. Suggested I checkout out the beaches in Santa Barbara, and skip the ones in Los Angeles. Informed me that the smoke is coming from Kings Canyon National Park, so we are likely not going to be able to see much of the sequoias due to the fires. All that professional service and friendly advice for only $150. I was mentally getting ready to sell my kidney on the black market, but I suppose for now I can afford to pay cash.

Still, the mood was emphatically gloomy. We sat in a hipster cafe (the only kind you can find in Mammoth Lakes), me staring at a sandwich, waiting for the anesthetic to wear out, thinking what to do about the broken spokes, the burning oil, and the depleted morale. It was Friday, not that it mattered except for the fact that the spoke shop in LA area will only open on Monday, so we had a couple of days to spend before being able to take action on that. Finally, we decided to head to Death Valley and aim to get to LA by Monday. Death Valley sounds like fun.

When we rode out of Mammoth Lakes, there was even more smoke along the road, covering most of the beautiful mountains of the Sierra Nevada that surround Owens Valley. We found some dirt roads along the way, and attempted to restore my faith in the trusty steed, with some success, I might add. 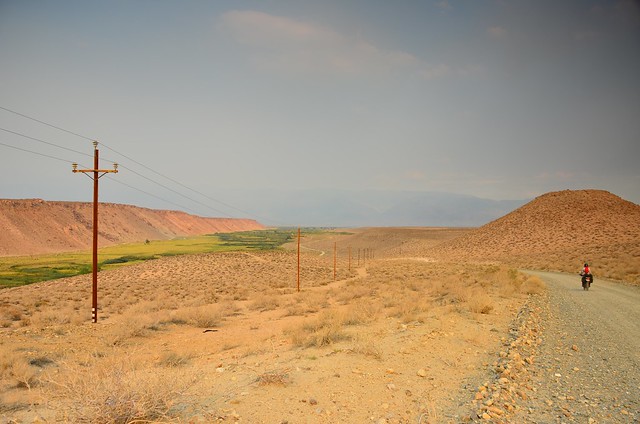 The palette is full of reds and oranges, with a tiny strip of green in the otherwise arid landscape. 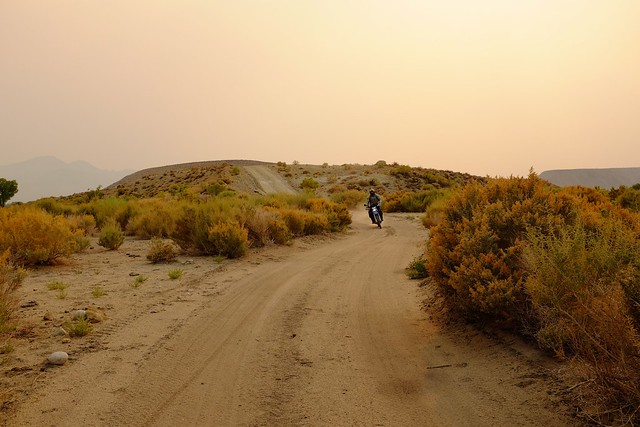 Heavy smoke covered up the sun and made midday feel like evening.

After getting out of a particularly sketchy section of the dirt track, we decided to get back to pavement and find some refreshments. Stumbled into a cute bakery café in the town of Bishop, studied the map, considered our limitless options. Came out of the café to find a noticeable layer of ash on the bikes – and it’s only been 30-40 minutes. What is this town going to look like tomorrow? 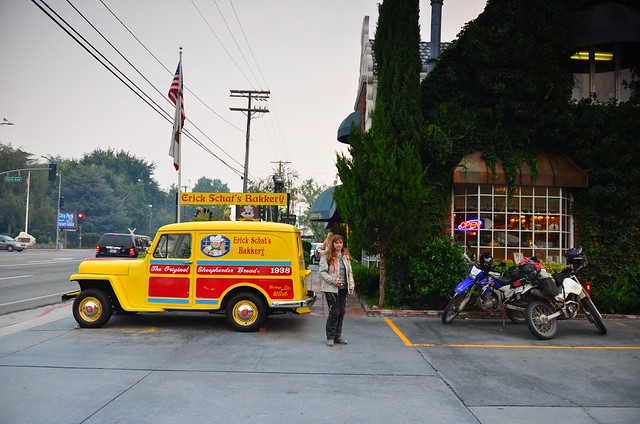 Lunch stop in a quirky bakery.

Apparently, very close to Bishop lies another unique landmark – the Ancient Bristlecone Pine Forest. Having studied the importance of these trees in another life, I was very curious to see them. There was a convenient campsite along the way, so it seemed like a logical choice to stop, set up the tent, drink tea, and hope for the smoke to clear out in the morning. The moon was full and shone in the most peculiar orange. It was 30 ºC so we did not put the rain cover on the tent and I kept watching that moon through the mesh until I fell asleep. 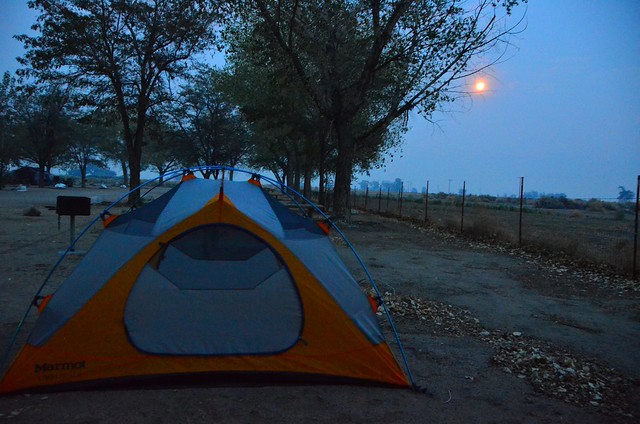 The moon shining through the smoke.

The morning welcomed us with brilliant blue skies and clear air all around. We continued on towards the Ancient Bristlecone Pine Forest, but as always, the route we took was not entirely direct. The detour began with “I wonder what’s over there” and ended with us gazing at the section of the Very Long Baseline Array. Because clearly, this region is dense in scientific points of interest. 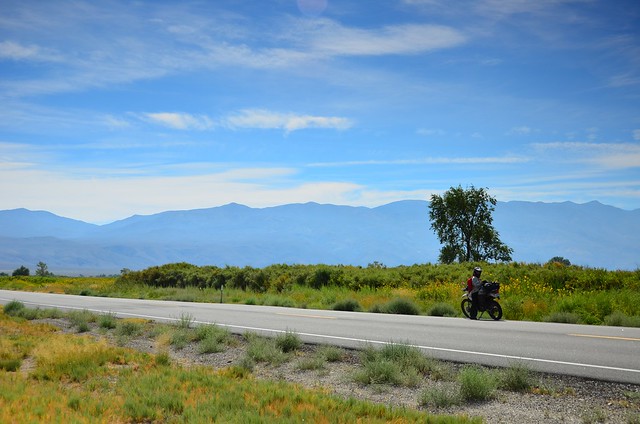 We didn’t even see these mountains the day before! 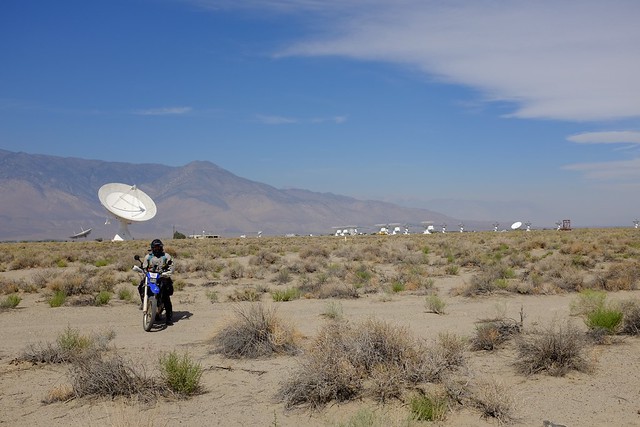 Alex sticks out like a radio telescope in the desert.

Up the mountains we went, stopping here and there to enjoy the numerous vista points, looking at the Sierra and the valley, and to smell the fragrant plants growing along the road. I think it was sagebrush. 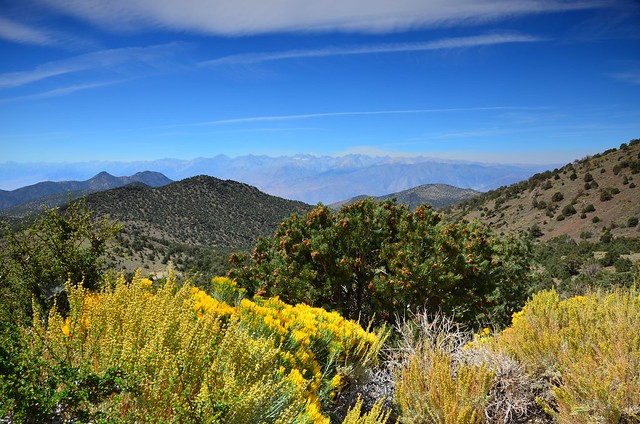 Sagebrush, juniper, the rolling hills and the snowy peaks. 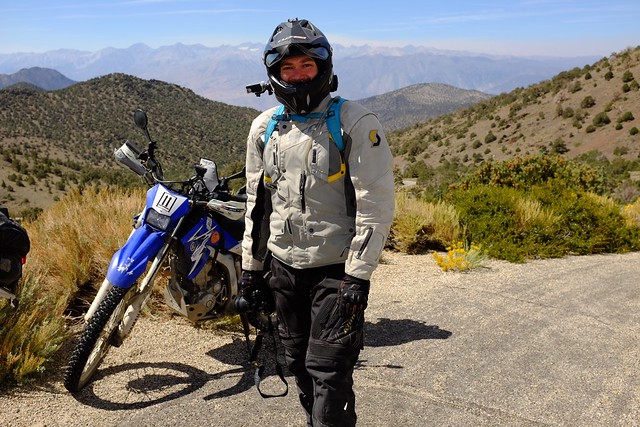 The XT smelling the flowers.

Once in the Ancient Bristlecone Pine Forest, it was time to take a walk among the ancients. It is quite difficult to wrap your head around the fact that these trees are 3000, 4000 and even 5000 years old. You can sort of imagine solid rock structure lasting that long, but a living tree? Some of the trees in this forest are older than the Great Sphinx of Giza, and frankly, I think they show less wear and tear. The most fascinating fact to me was that the reason you can see their roots so well is due to the topsoil eroding away over time. Mere millimetres lost every year add up to drastic losses over the course of millennia, eventually causing some of the trees to topple over with nothing to hold on to. 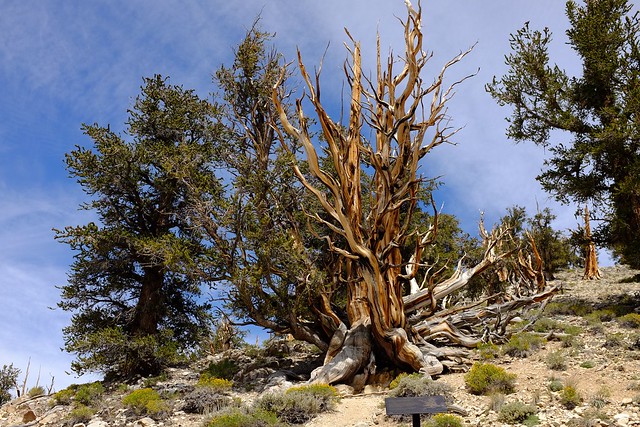 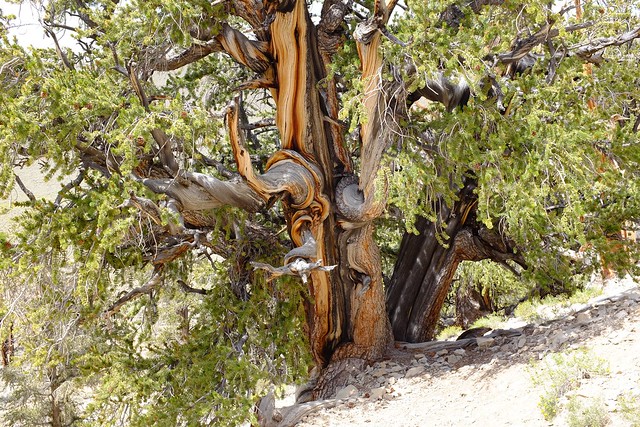 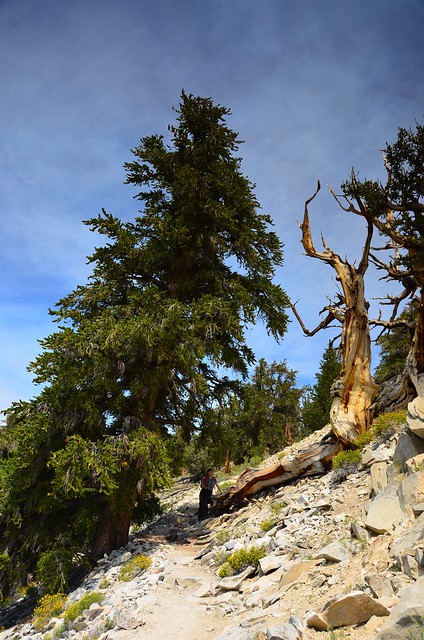 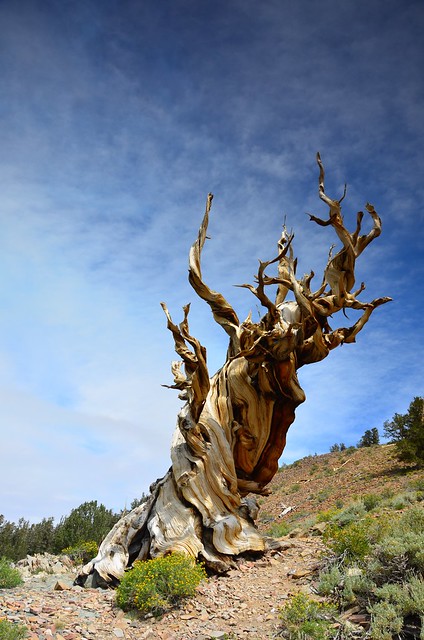 On the way back we took a new approach, opting for the dirt track through the hills instead of the twisty paved road. Once we got back down into the valley the heat was on. The sun was blazing, the wind only made it hotter. There were several small towns along the highway, with plenty of food and refreshments. Considering it was the middle of nowhere, we welcomed the diversity of dining establishments, which consisted of somewhat bastardized Mexican food and less bastardized Mexican food. There was something for everyone. We ate fajitas and drank Mexican cola. As one does. 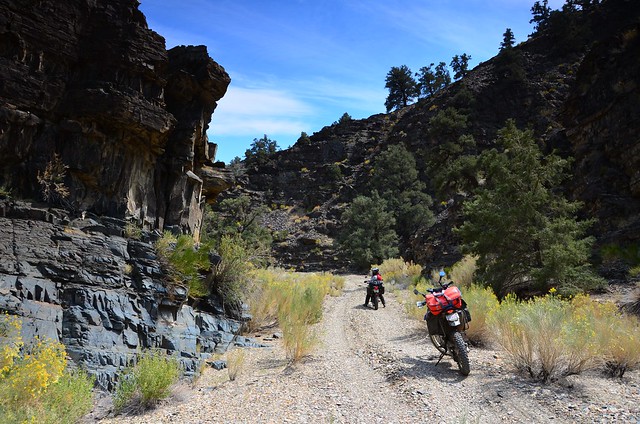 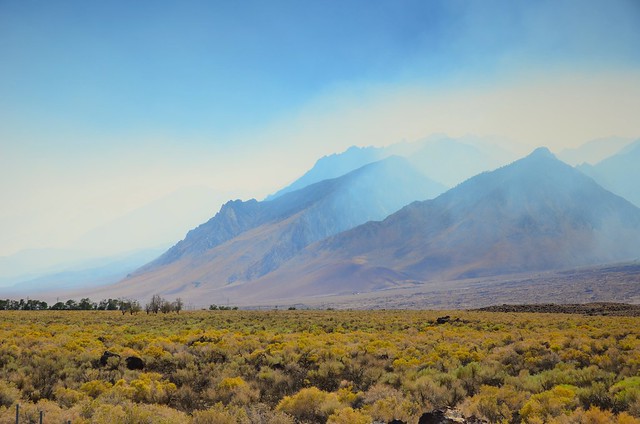 The smoke is coming in from across the Sierra.

To camp in the Death Valley in August you have to be either a) suicidal or b) heading for the high camps where the temperatures are actually bearable. We chose the latter. Mahogany Flat Campground is the highest one in the park, with an elevation of 2500 meters. It takes at least an hour to get to it once you turn off the main road, and with views and light being spectacular, it might take a little longer. 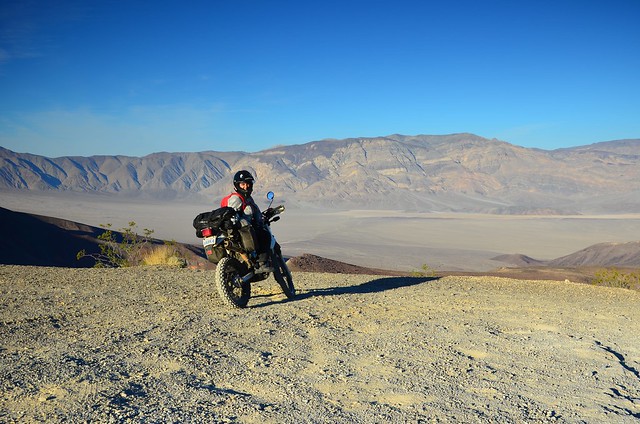 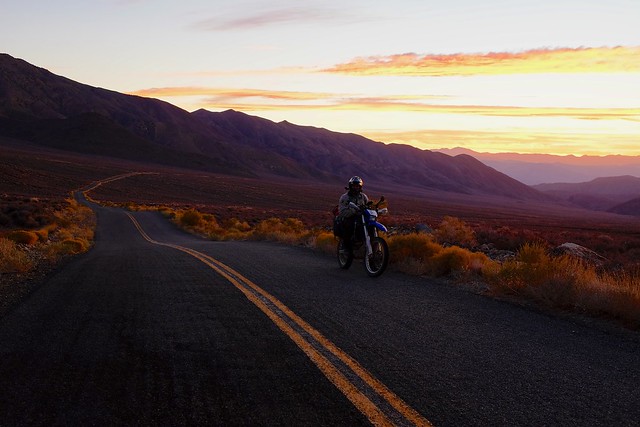 Close to the top the road turned into a hard packed washboard. It was dark, bumpy and full of suspense. Are we there yet? When we finally reached the campsite, turned out we were just in time for a campfire, beers included. A group of friends were gathered to kick off their hike to the Telescope Peak the following morning and apparently had enough jolly mood to share. We took in as much of it as we could, knowing that they would likely be long gone on the hike by the time we would wake up tomorrow.