The morning in Vermillion Cliffs was sunny and warm. We ate squished apple turnovers for breakfast and spotted a pair of long ears in the grass nearby. The jackrabbit was also having breakfast and did not seem bothered at all by our presence. 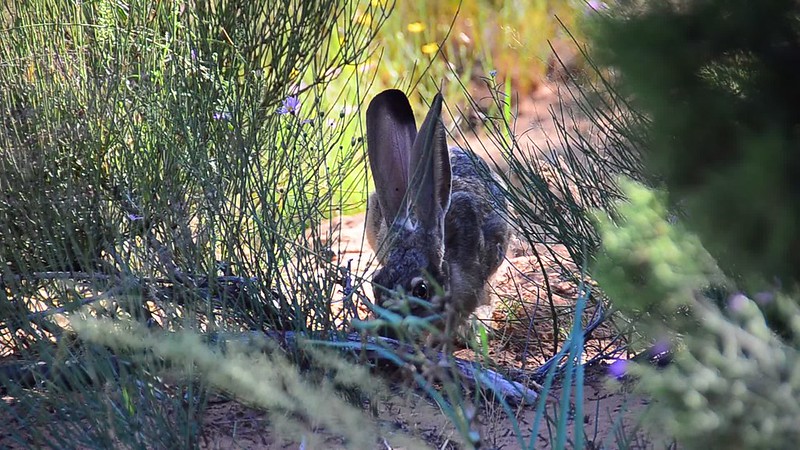 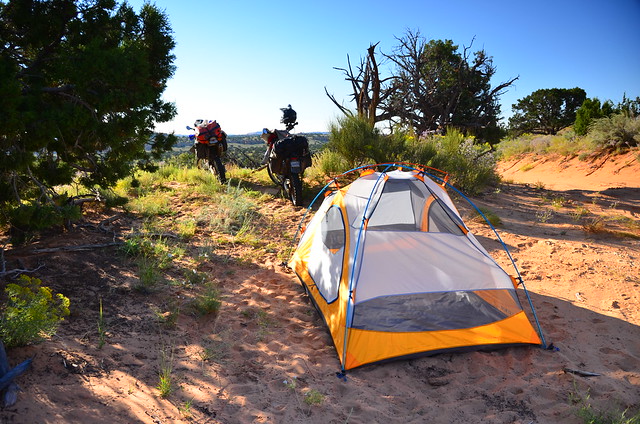 Late morning at the campsite 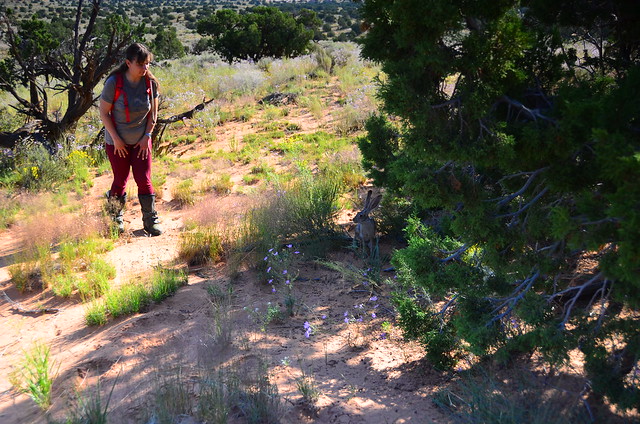 Checking out the rabbit

We packed up and rode the last mile to White Pocket. It was just as sandy as the sections preceding it, finishing up with a large parking area and a short sandy hike taking you further in. Finally the sand dissipated and we were left wandering in a landscape that was strikingly different from anything else I have seen. It was white, and red, and smooth, and cracked, and striped, and squared, and bubbled, and dry, and hot and it just didn’t make a whole lot of sense. 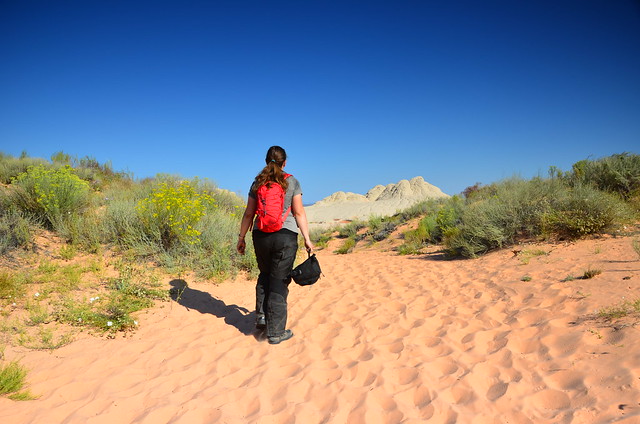 The hike to White Pocket, the white stone formation already visible ahead 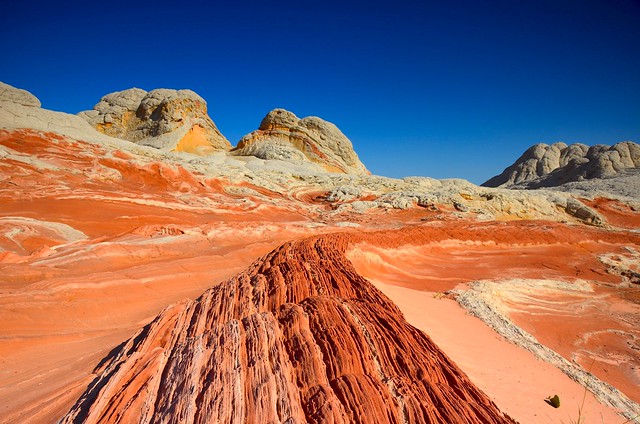 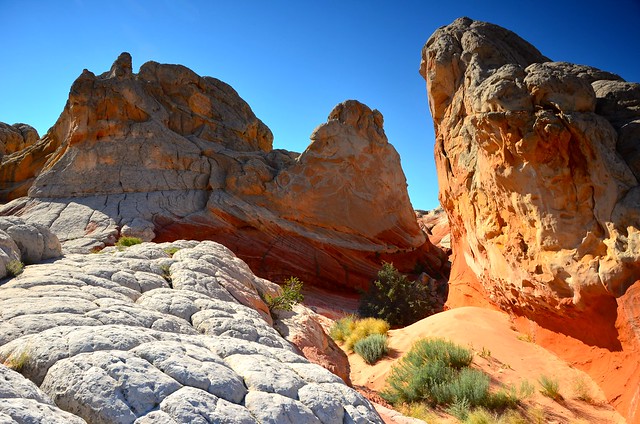 The many colours and textures of White Pocket

It looked different from every angle. The rusty red colour dominated most of the landmarks in the region, but here a lot of the sandstone formations were white. How did all of this come to be? A helpful plaque along the trail told me back in prehistoric times all of this used to be a large sand dune field, large enough to cover most of modern day Utah. Wind, rain and other natural forces turned it into the array of natural wonders the region is famous for. Somehow, the particular way sand moved and settled here resulted in this white, red and pink creation. 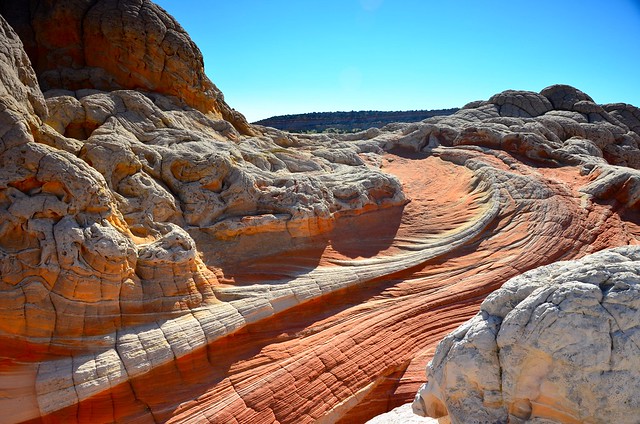 Despite the heat, there were still some pools of water with toads swimming in them. Lizards were hiding between the cracks of the sandstone. 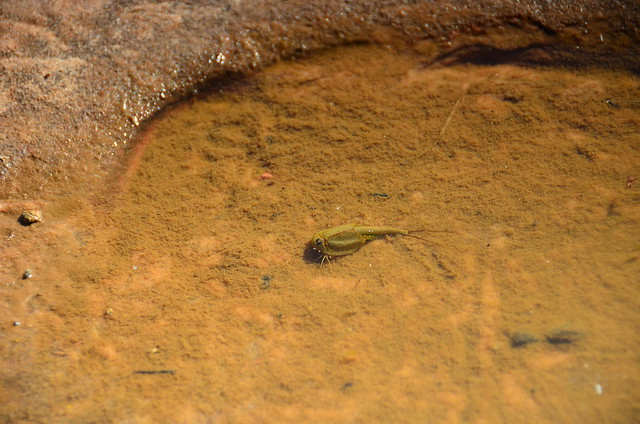 Will this fellow have enough time to grow and leave before the sun dries out the puddle? 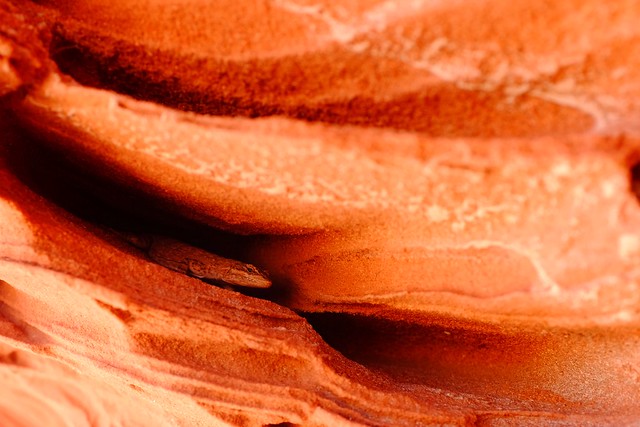 Lizard hiding from the sun 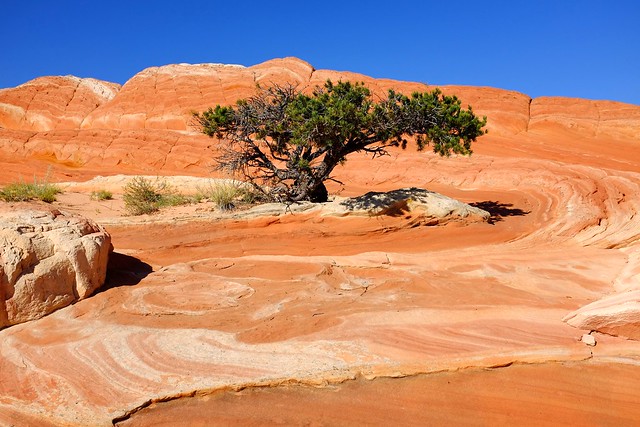 Putting down roots in the sand of White Pocket 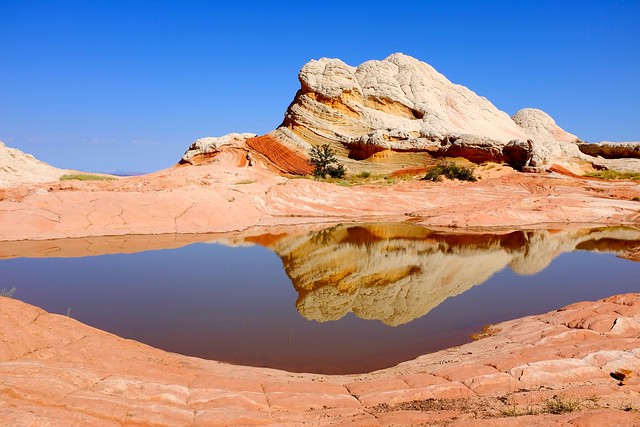 A lake in the middle of the harsh landscape 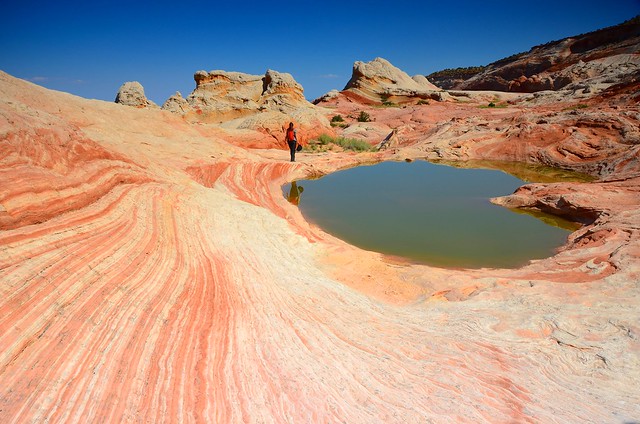 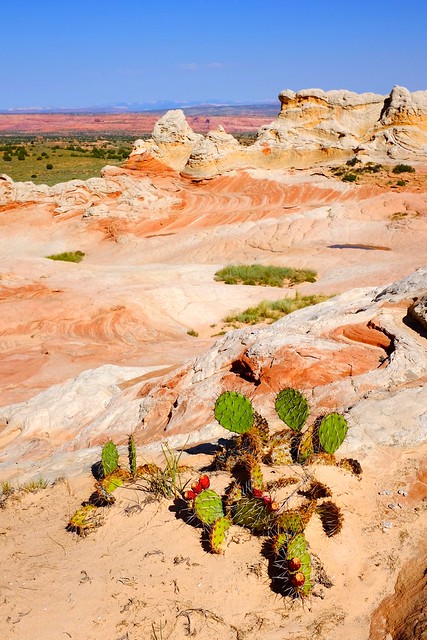 White pocket is located on the edge of the plateau making up Vermillion Cliffs. This cactus thus has a marvellous view out onto the plains around.

We enjoyed the serenity for over an hour here, roaming around the area, and then spotted some people climbing one of the hills. At that point we decided to head back to our bikes and out to civilization. 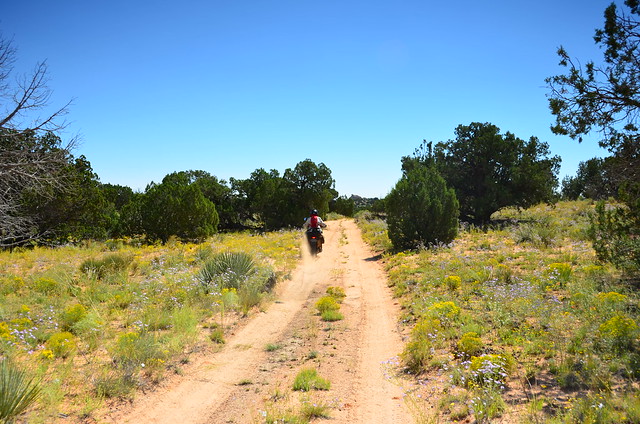 At first the road was not bad, I could go fast enough to even produce some dust in the process

Since we had such a hard time getting here, we decided to try a slightly different route on the way out. It was supposed to pass by some petroglyphs, although spoiler alert: we didn’t notice any. We kept hoping that this path will be easier than the first one we took, but those hopes did not materialize. It was sand, sand, and more sand. Perhaps if I could get up to 60 km/h I would be able to stay afloat, but I never did manage that. Many times I would lose balance and either stop in a semi-controlled manner, or just drop the bike completely. Sure, the sand was soft and nobody got hurt, but picking the bike up was very tiring. It was over 30 ºC, noon, and we were running out of water.

Alex was getting very frustrated. He could get up to higher speeds but had to wait for me and bake in the sun anyway. He was also the one who turned around to come and pick up my bike on all but 3 occasions. We stopped to rest whenever we found shade or every 100 meters, whichever came first. Observed more jackrabbits, lizards, huge red and black ants, birds. I suppose it all was quite beautiful, especially if you were not getting dehydrated, overheated and could move fast enough to generate some breeze. To make it worse, the water was finally gone.

At last just as we approached the intersection with the primary White Pocket route, we saw a van and flagged it down. A group of elderly German tourists jumped on the opportunity to take photos of such a rare wildlife encounter – baked Canadians on motorbikes. The tour guide gave us a pair of water bottles each, and for that I was willing to strike a lazy pose. Alex later commented that this reminded him of Skid Row in LA, when I wanted to take photos of people in their misery. That it’s too passive of an act and does not engage the kind of connection necessary to truly understand the story behind the resulting photos. Personally, I was too exhausted to get bothered by that.

Once we came to our senses a little better, the guide told us that in his younger years he took his BMW 650 to this road. Was that the first German he took to this place? He mentioned that it was another 8 miles until the road got better. So we pushed on.

I was barely able to even shift into second gear and ended up pedalling with my feet when the sand got too deep. Sometimes my bike would overheat and stop, forcing me to pause for several minutes in the scorching sun until it cooled sufficiently to continue. Alex pointed out that this was not a proper technique when riding in the sand, but he was quite tired too. He also could not deny that at least I stopped dropping my bike while riding like that. We took a couple more breaks under the juniper trees, saw another car pass, contemplated the nature of existence, and finally came to a point where the sand subsided and gave way to hard packed dirt. It was ahead of schedule, not 8 but only 6 miles after we met the German tourists. Took us about an hour to do that. 6 miles in one hour.

Once on hard packed dirt, we sped up, stopping only to chat with a couple on a Honda Civic, driving all the way from Quebec. It took us 4 hours to get from White Pocket to the paved hot 89 – which covers about 50 km of mixed roads, but probably at least half of that was spent just sitting and resting.

The town of Marble Canyon was about 20 miles away and featured both a gas station and a nearly empty restaurant. The food was ok, but the presence of air conditioning made it delicious. I was glad that after 3 successive meals of sandwiches and burgers I could have something resembling a normal meal, complete with soup.

Alex decided to check up on the Californian dealer from which we got my bike, since I still did not have the title for it. Apparently, it’s a long process and it was made even more painful due to the dealership’s utter lack of interest in getting things moving. Alex was bounced a few times between different employees, each with a different set of excuses, getting understandably aggravated in the process. With a new set of promises and a few more days to spare, we kept going. 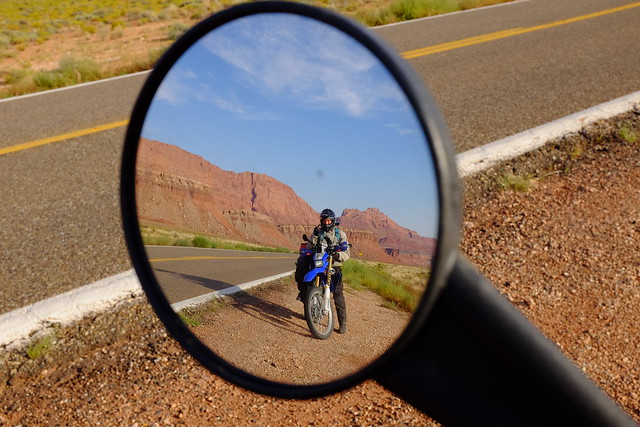 The road was hugging Vermillion Cliffs, the views were majestic every way you looked. To the north, the red cliffs towered over us, to the south the green pastures kept getting broken up by the numerous small canyons. At one point the road crossed the Colorado river, which looked very voluptuous compared to the dry creeks that made up all the other canyons. 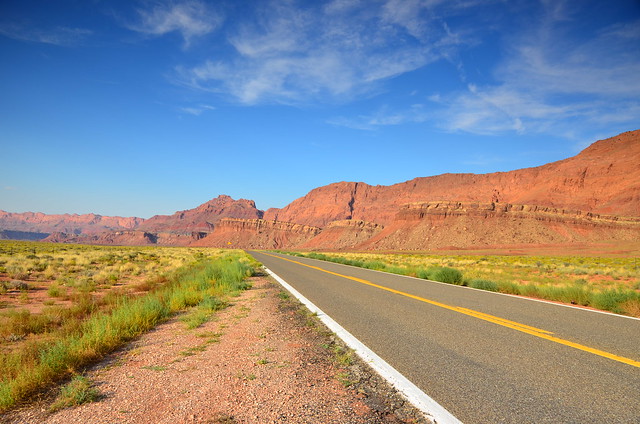 Vermillion Cliffs as seen from highway 89 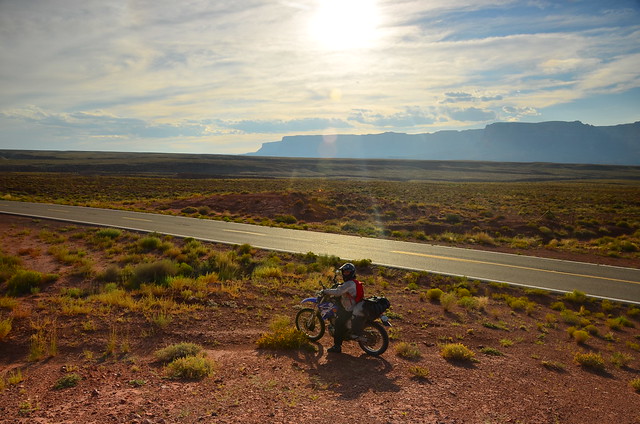 Opposite to Vermillion Cliffs is the Kaibito Plateau, on the east side of the Colorado River

Our target for the night was Page, a town on the shores of the beautiful Lake Powell. There are several things we wanted to explore there, but first things first: check into an air conditioned hotel room and send Alex to the nearest shop to get some cold drinks.

After all the suffering in Vermillion Cliffs, he said we wouldn’t go riding off-road in Moab with me. And I did not even feel bad about that.