Hiking in the Olympic National Park

One thing that’s good about cold nights in a tent is that there is extra motivation to get up, get dressed and get moving. Once outside, we warmed up under the late morning sun and decided to enjoy a fresh cup of tea. Surrounded by old evergreens, time seemed to flow slower, and the mountains towered in the distance, draped in deep blue haze. 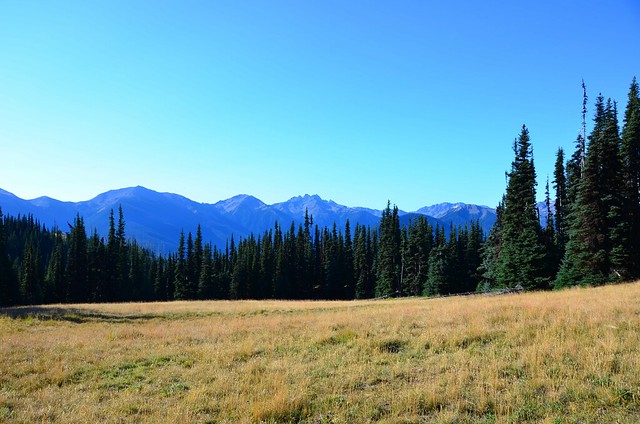 Olympic mountains seen from the top of Deer Park campground 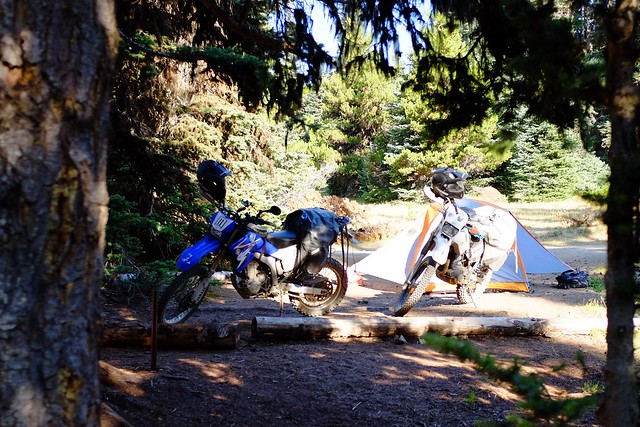 Our bikes warming up in the sun

Today we decided to keep riding to a minimum and spend some time hiking instead. According to the park map, Hurricane Hill trail was a perfect contender for those who like a high scenery to effort ratio. We still had to navigate the twisty road down from the camp, which was also incredibly beautiful, and in daylight – much easier to handle, so that Hurricane Hill is going to have to try hard to impress!

We got into the park and stopped in a large parking lot next to a visitors’ centre. Took off all our moto gear, arranged it on the bikes, slipped on comfy shoes, and got ready to hike. Only then we realized that the trailhead was actually a few more kilometres away! We could technically walk there, but it would eat into our scenic hiking time. Careful riders that we are, you’d think we’d at least put our helmets on, but either something in my head was still frozen from last night, or the sun got a bit too high and my brains began to melt: I convinced Alex to hop on the bikes and ride to the trailhead as we were. 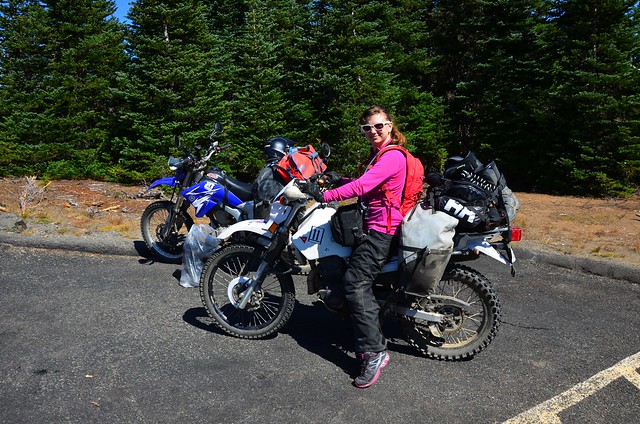 All the gear most of the time

Instead of following the conventional route of the trail, we veered a bit into the smaller hillside trail where only a couple other hikers went. Here I had the pleasure of starting an unofficial contest for “the most picturesque place to take a leak”, which can get very competitive when you have a motorcycle and an America the Beautiful pass at your disposal. 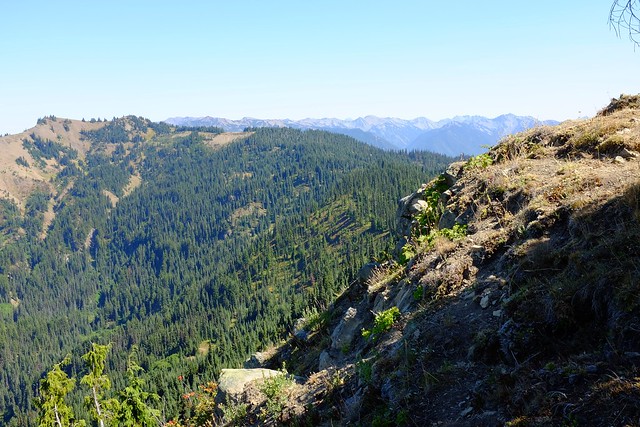 Part of the less official route of the Hurricane Hill trail

At one point as we were taking in the views, a deer came towards us out of nowhere, said hello and continued in the opposite direction by the trail. Closest wildlife encounter so far! 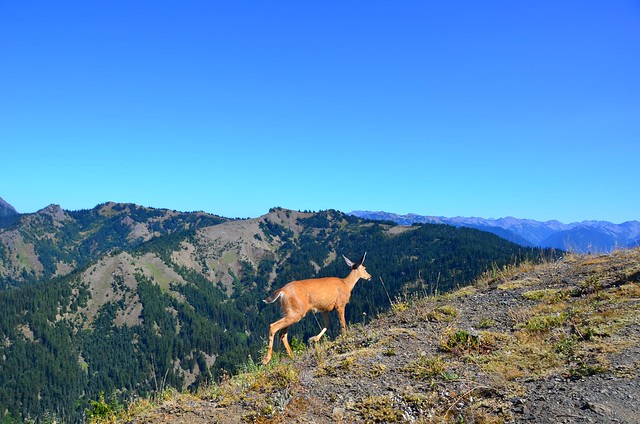 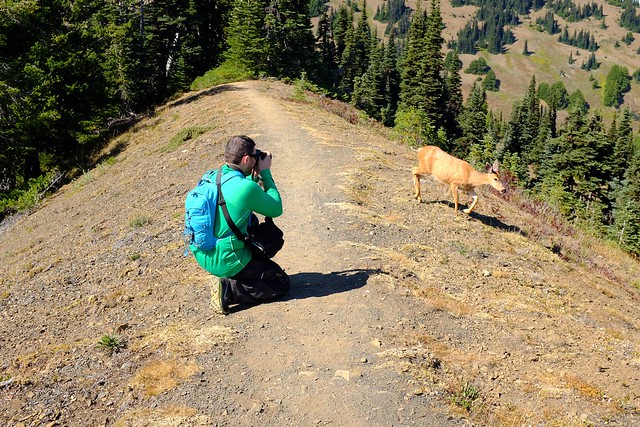 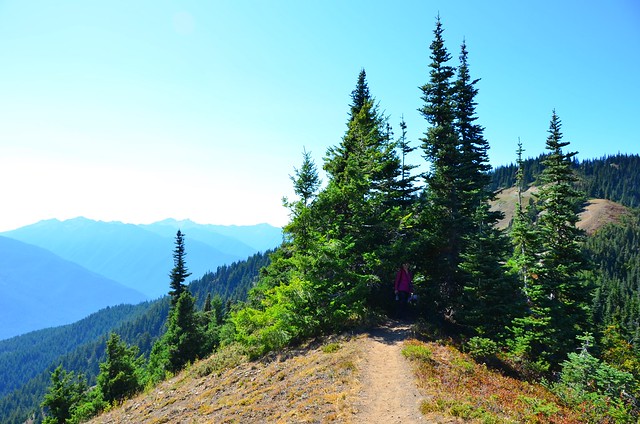 Most of the trail is exposed to the sun, but one comes to cherish the occasional patch of trees along the way 😉

The hike is indeed relatively casual, made more difficult only by the hot weather. The view eventually opens up to see Vancouver Island with its mountains, the surrounding Olympic range, further out – mount Baker with its white cap, not to mention the Strait of Juan de Fuca and the city of Port Angeles. The landscape is very wide and looks rather flat on photos. In real life, it’s impressive enough that we sat on one particular rock for at least 20 minutes just absorbing it. 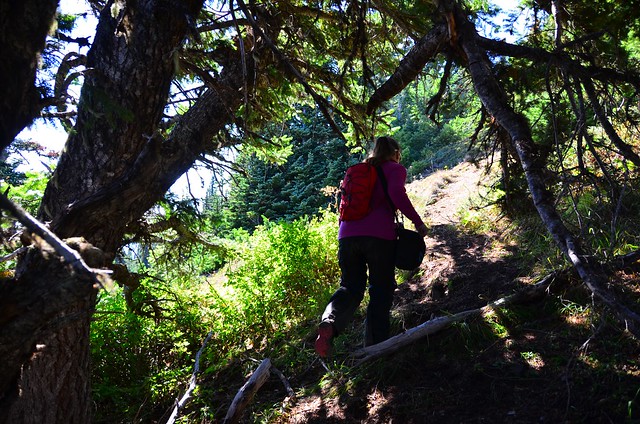 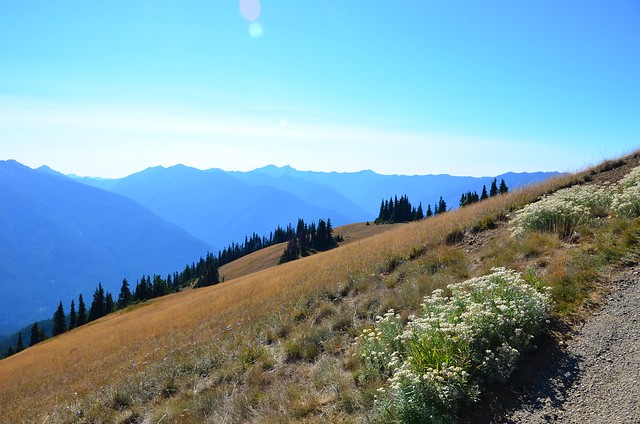 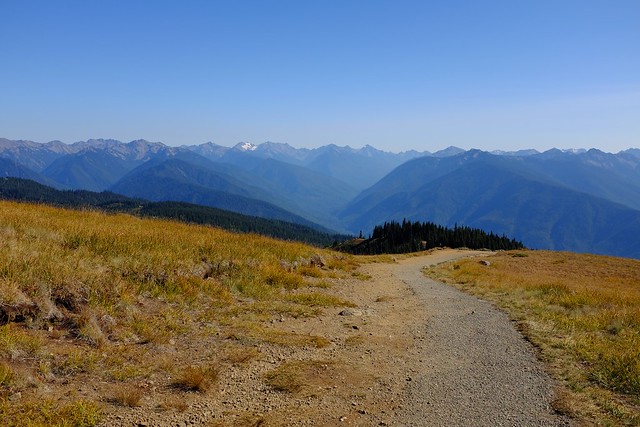 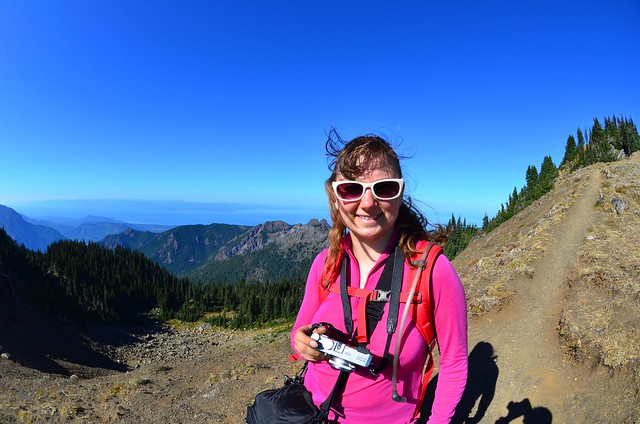 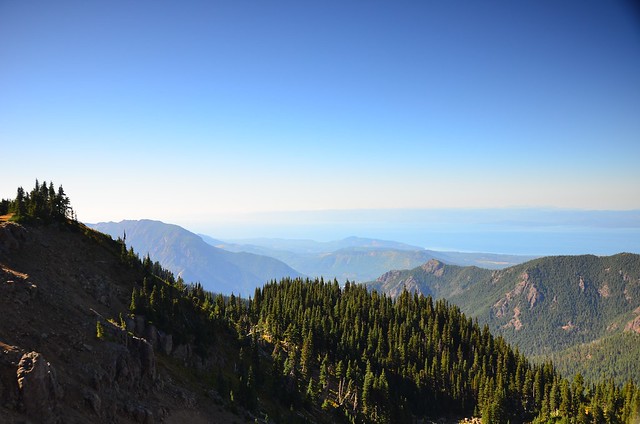 Part of the panoramic view from the top of the trail

Hiking back Alex exhibited remarkable powers of observation by spotting an Olympic marmot gazing motionlessly into the distance about 10 meters off the trail, and a deer with large antlers hiding in plain sight in the shade of a tree right by the trail. When I first looked at that marmot, I said it must be a tree stump… 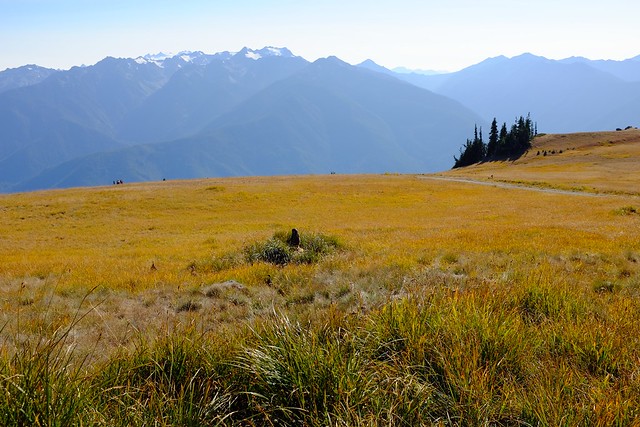 Do you see the marmot? 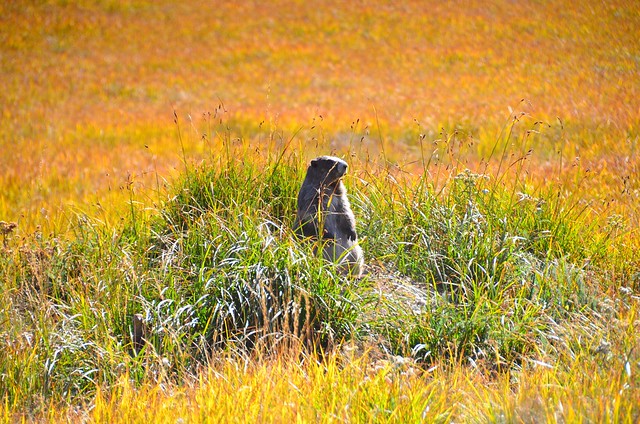 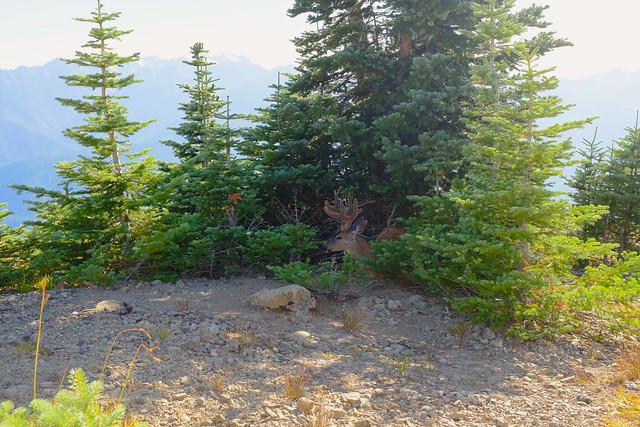 Deer hiding right next to the trail

Satisfied with our first national park visit, we went to Port Angeles for some good American cuisine (don’t laugh) and a warm motel room.