We rode two days for these fish tacos

When we decide to fly, we fly far, but when we dream, we fly further. Our dream was to ride around Baja, and now that we flew across the continent to live in California, our dream started turning into a plan. In retrospect we over-prepared in some ways and didn’t prepare enough in others, but none of it mattered anymore. The morning we left, there was a visceral energy in the air – a mixture of fear, excitement and hope. We planned to explore Baja Norte off-road and we didn’t know what was going to happen. Will we have enough fuel? How will we manage in deep sand with all our luggage? What’s going to happen if we get stuck in the middle of nowhere? How will we manage with our lack of Spanish? Life’s beauty lies in the experience and so in there we will find our answers. 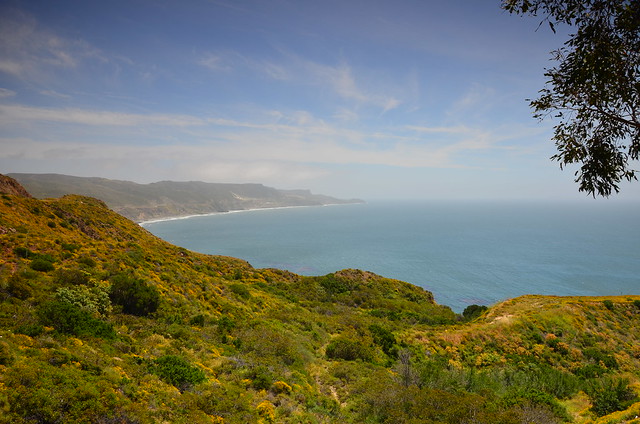 The Pacific just off Mex 1

Heading south by 101, we cruised to the slow rhythm of the curves. Periodically the mission bells would appear reminding us of the historical significance of the path we have chosen. If my memories of that day’s travel were to be processed into a stereoscope reel then it would include the San Luis Obispo de Tolosa mission and the Madonna Inn where we got a glimpse of a wedding ceremony, the strawberry fields with that deliciously strong fragrance, Camp Roberts – where soldiers were shooting at an outline of a human being, Pismo Beach with its palms, roses and that fresh cool breeze. 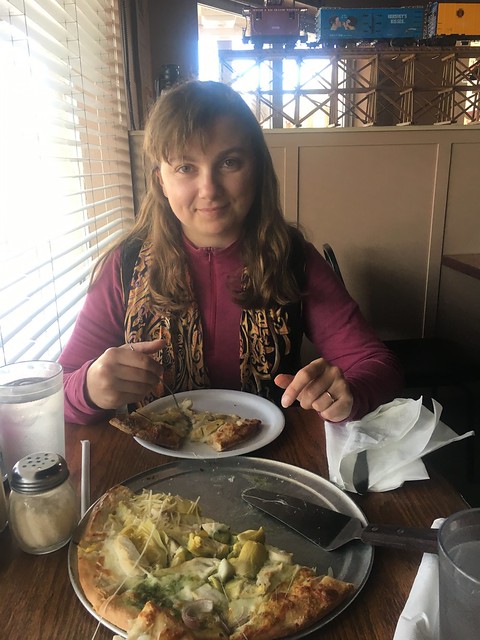 Having pizza at Antonio’s in Buellton

Taking 1 around Oceano we were greeted with ocean fog serenading through old bamboo trees with yellow dunes and the Pacific offering a picturesque backdrop. We decided to stop at Buellton for lunch and then continued on to Matt’s ranch. Matt was our tent space host for this evening. The road to Matt’s avocado ranch is quite scenic as it climbs above the valley and then drops right into another valley with an awesome narrow road that slithers through fertile fields and river crossings. Matt met us at the gate and showed us to our camping spot. The drinking water from the well tasted better than our tap water from home and he encouraged us to take advantage of the ripe citrus fruits on the nearby trees. The sun was setting and we wanted to chat more with Matt, but the mosquitos were hungry. He gave us one final important advice: don’t run around in the dark or the rattlers will get you (them being nocturnal hunters). We climbed into the tent and listened to the banging of the Marine Corps Pendleton testing their mortar and artillery. 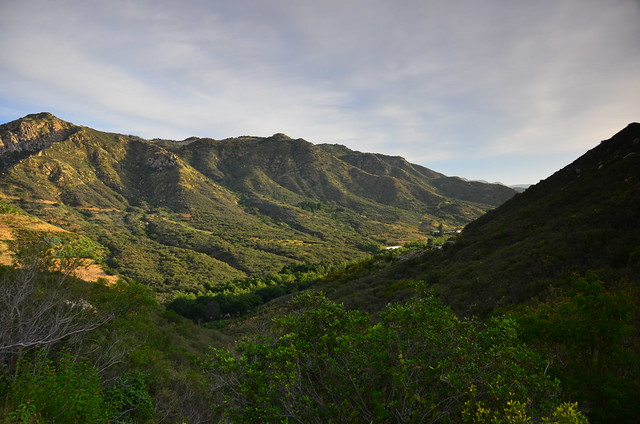 In the morning we climed out at 7ish and began looking around. We were surrounded by avocado and citrus trees. Ever since moving to California we indulged in reckless consumption of avocados. So to no surprise, our curiosity led us to learn that unlike many other fruits, avocados only ripen after they are harvested from the trees. Which means that here they can be harvested all year long. It was fascinating to walk around our campsite and observe peach trees, mandarins, avocados and other fruits all growing together. 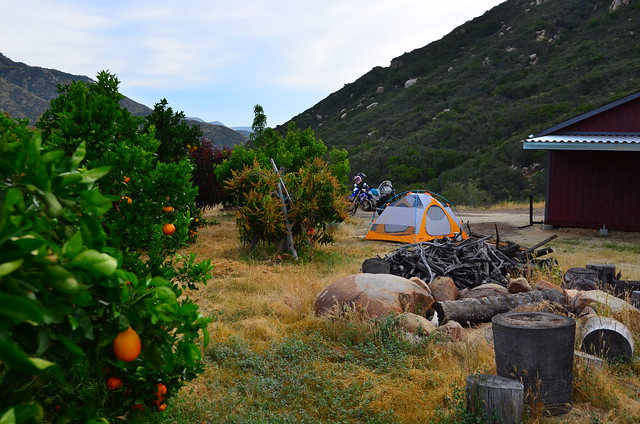 Camp among the citrus trees

Our breakfast consisted of fresh fruit and some leftovers from the day before. It was delicious! Heading down the mountain was a ton of fun with all the switchbacks and coming around the corner I must have spooked a coyote who leaped down right above me and onto the steep without ever touching the road. Entering Mexico was a lot simpler than it sounds. You simply drive through. A little too easy and sure enough we were directed to stop at a building where we got a complimentary tourist card. Thanks to another traveller we found where the office of Secretaría de Gobernación is located and took turns heading in. Hardest obstacle of the day was the process of taking money out from the bank at Plaza Rio. None of our ATM cards worked because our banks thought these were fraudulent transactions. Thankfully I still had US Verizon signal on my phone so after responding to an SMS alert we were able to use the card. Now armed with pesos, we had to pay for parking at the mall and obviously the parking machine and the security guy didn’t take the large bills that we had from the ATM. It was necessary for us to find change. Thankfully a mother and daughter who were paying for their own parking had mercy on us and provided us the change we needed without accepting any money from us. 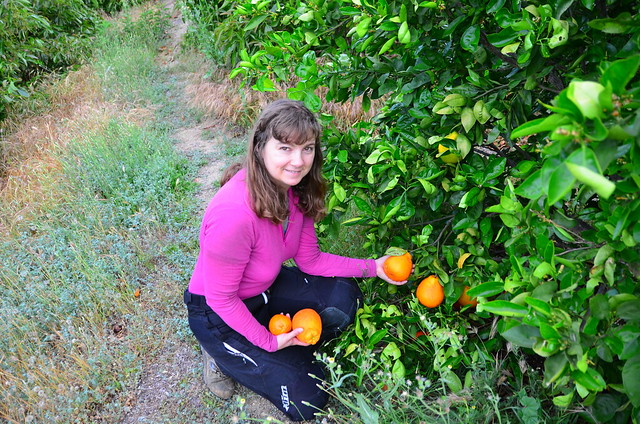 On we went for Hwy 1 and this is when it really started to feel more like Mexico. The traffic, the roads, the garbage and the smells. We moved through till we spotted a fish taco place by the ocean and stopped to fuel our stomachs. 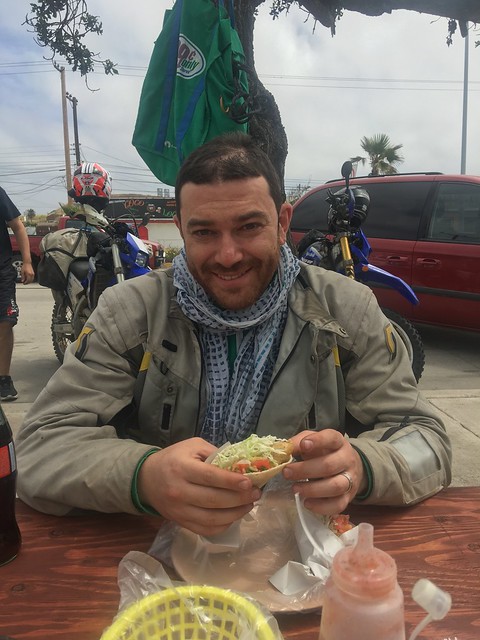 I can go on a fish taco diet anyday!

From there we pressed on to Ensenada. We followed a track that took us along beaches, ocean roads and farm lands. It was on these trails that Marina had her first encounter with deep sand and it got the better of her. She bruised her leg, arm and scratched up her face. I took the liberty to point out something silly and that pissed her off even more. From there on the morale was low despite the beautiful untamed ocean that lined our way. To no surprise we decided to cut on some of the trails and head straight for Molino Viejo. 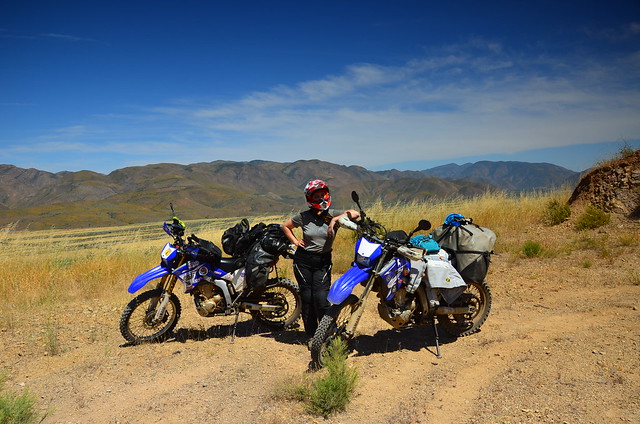 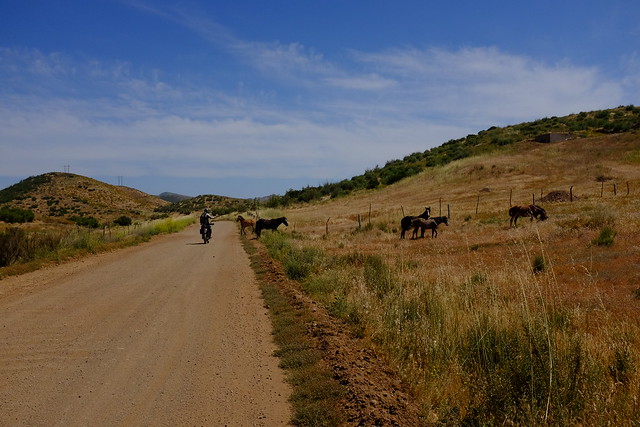 It was common to see horses, cows and other animals along the road 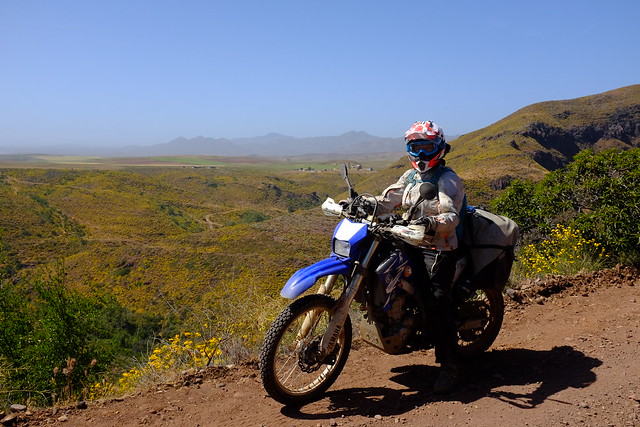 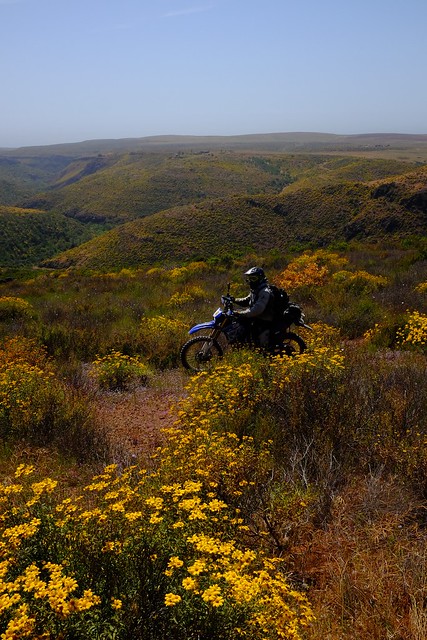 Following the ridge towards the ocean 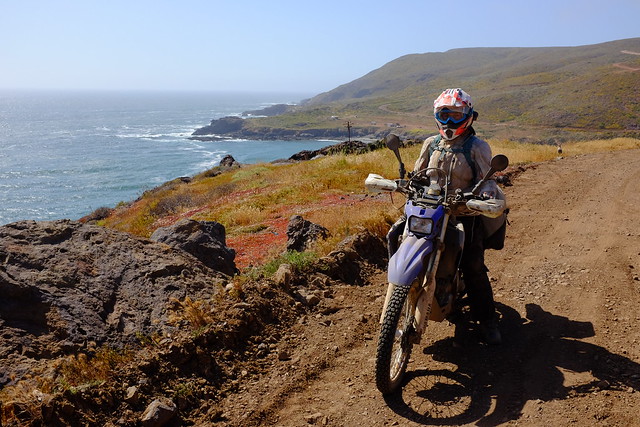 Right after the fall – not happy! 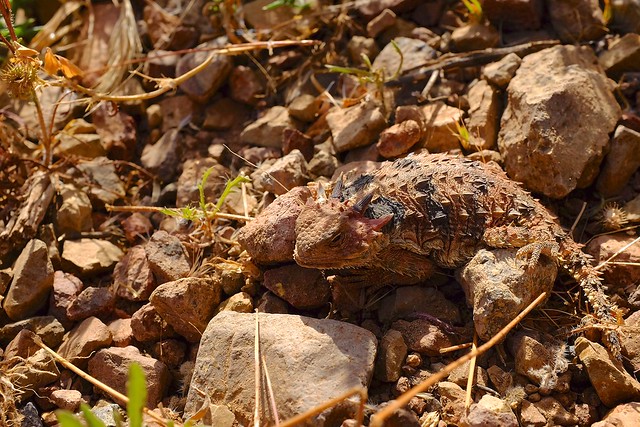 Joined us for lunch

The Mex 1 is quite fun with really crazy drivers. We saw an old Camry heading the opposite way try to overtake a couple of vehicles only to blow its front tire and screech to a halt on the side of the road. A couple of young boys speeding the opposite way doing some aggressive driving and deciding to cut really close to me (less than a foot away) after an overtake. As we reached the hotel we parked next to a couple of GSs. We got our gear off and lugged it up to our room on the second floor. After taking a much needed shower we headed for dinner and to look at the bay. The sea bass was delicious and we chatted up with the other couple of riders on the big GS bikes. Seems like they were also headed in the same direction, maybe we will see each other again. After dinner we went back and did some much needed maintenance like taping the front fairing, lubing the chains and zip tying my rear fender. Exhausted from our fully packed day, we retired to bed for our first night in Mexico dreaming of better fish tacos to come. 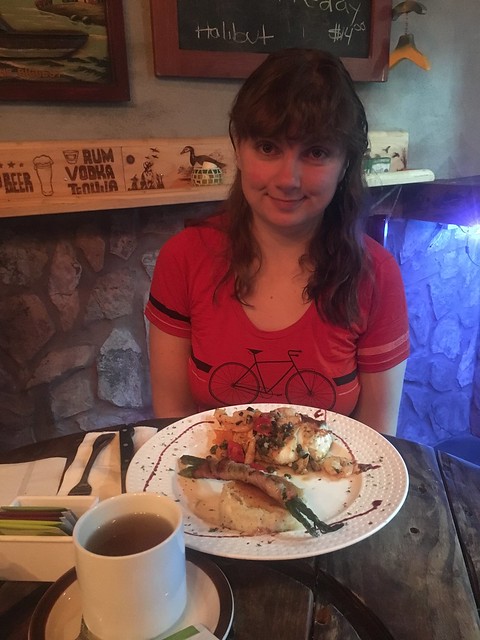