Baja has a rich racing heritage which can be dated back to the 1967 “Mexican 1000 Rally” and even before that to the timed Tijuana to La Paz run in 1962. It offers a rough and diverse landscape that is both dangerous and fun to explore. So it was with much delight that we listened to our friends on the GSs recollect close encounters with racers gunning it across the sand whipping sand waves that followed them like shadows. This morning everyone was in better spirit, we packed and installed our gear and Marina even asked me to pump up the tires for the bit of slab riding we will do. Our breakfast was going to be at a special restaurant. 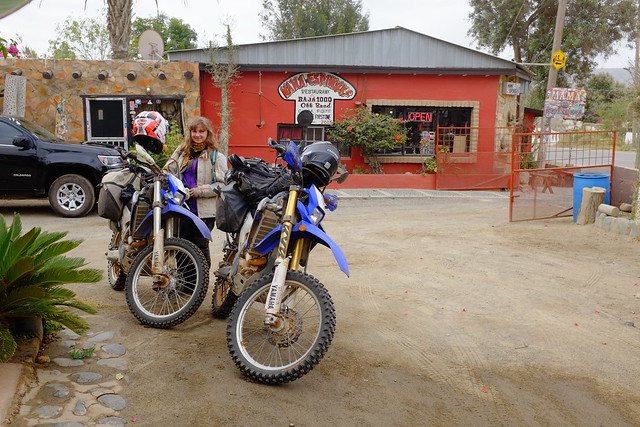 Gearing up near Mamá Espinosa 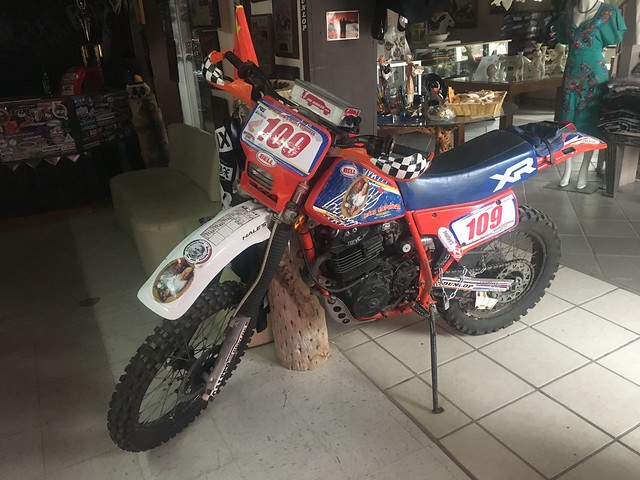 One of the many racing artifacts at Mamá Espinoza.

Mama Espinoza was going to be our first stop, incidentally it was also the first checkpoint for the NORRA 1000 mile races for over 40 years. This little restaurant sits on the acute corner of MEX1 and is rich with photos and other memorabilia celebrating Baja’s racing heritage. Stepping for the first time into this small single storey diner felt like stepping into a museum. We were surrounded and overloaded by a magnitude of historical artifacts. The smell of cooked food brought me back to reality and then I realized there was a menu. Diced chorizo with eggs filled us up, which put us in a mood for adventure. With that we filled our tanks at the Pemex and began the long stretch to Cataviña, hoping to find fuel there before we embark towards the Pacific coast. 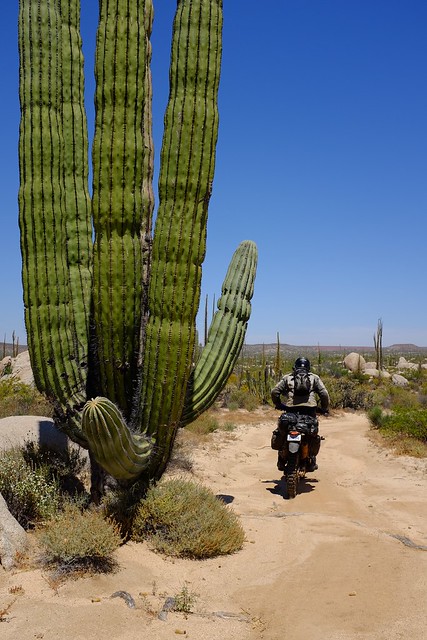 The road to Cataviña entertained us with twists and vistas of many sorts. We detoured and took some trails to ride among the cardón cacti and the sizeable crumbled remnants of rock formations too tired to stand tall. This transition from desert to a landscape filled with aged boulders stretching as far as the eye could see was captivating. There was little traffic which brought on the opportunity to stop and enjoy the scenery all to ourselves. 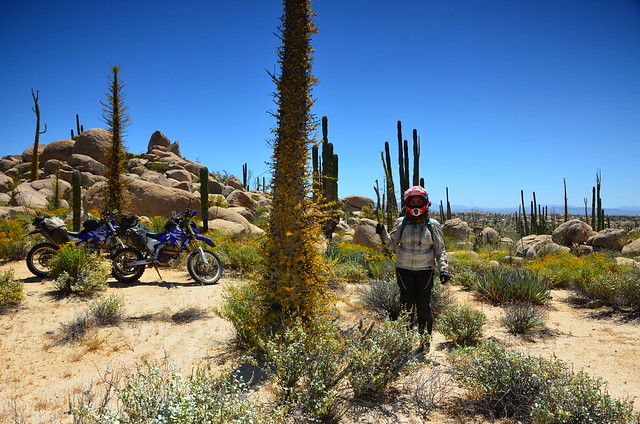 About an hour later we reached a small outpost where there were plenty of signs advertising gasolina, but no one was there. Gas was expensive and the concept of fill it up to the top didn’t exist with these guys – have to buy it by the bottle. We filled up our fuel bladder and headed a little north to link up with the Baja 1000 trail. There are multiple trails going in and the one we took was nice and sandy as it slithered left and right. It was difficult to pick up good speed so we both enjoyed the little workout. Unlike Vermillion Cliffs though, Marina appeared a lot less desperate here and with only 2 falls her spirit remained positive as she rode towards the main road. Once on the main road the pace doubled and we were both able to cool down and take notice of the scenery. I knew we were coming closer and closer to the ocean as the wind and humidity picked up and we started to cool down more and more. At first we could barely see a trace of something blue on the horizon. Yet within an hour or two we were already riding on the beach and sending flocks of seagulls into the air. 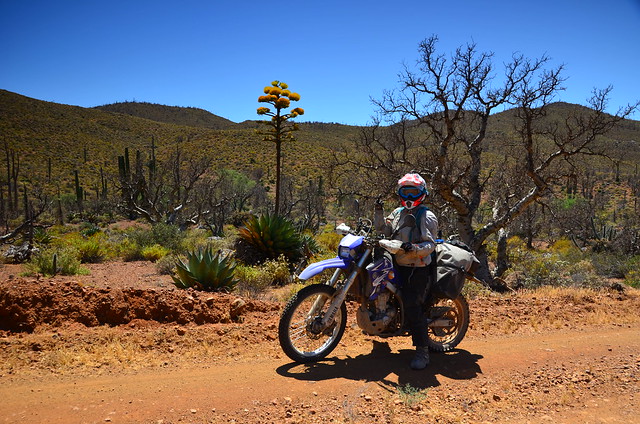 Stopping beside an agave plant 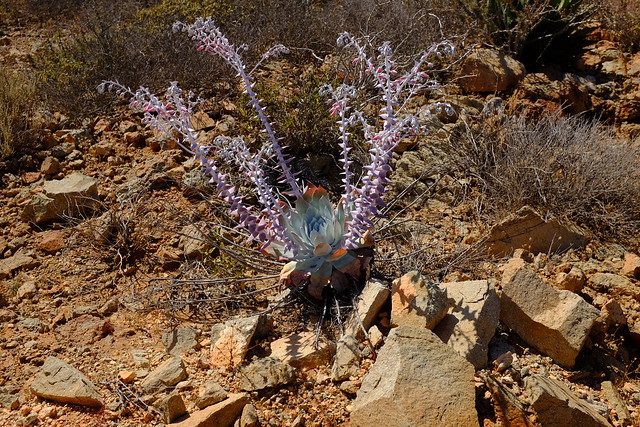 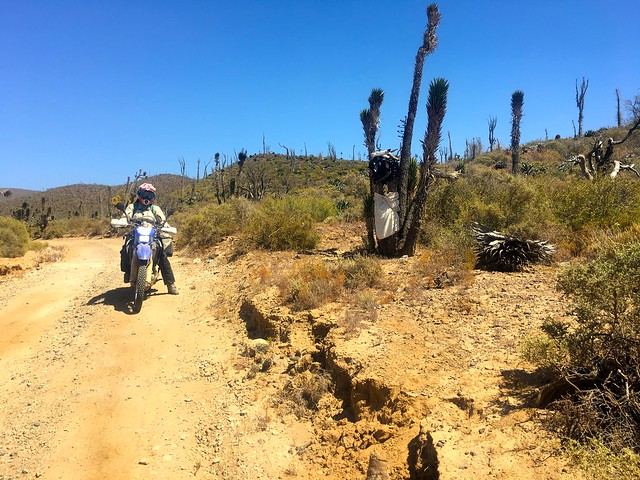 Marina’s lack of desire to have a break and take off her helmet surprised me. Her plan was to keep pushing along the coast until we find a campground. Once we stopped on a beach and took our lids off the atmosphere changed and I dare say she enjoyed it. The cookies were consumed and the seagulls were chased, the morale picked up and she led the way forward picking up speed through the turns, attacking the rocky hill climbs with calm precision. We kept traveling off-road for about 5 hours and then I coerced her into setting up camp close to some fishing boats. It was a windy spot in deep sand, but it was magical – an Aladdin’s cave filled with ocean jewels. The beach was filled with intricate sea shells that neither of us has ever seen before. 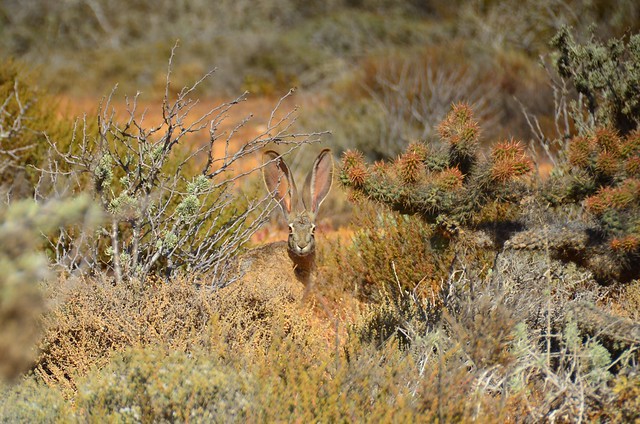 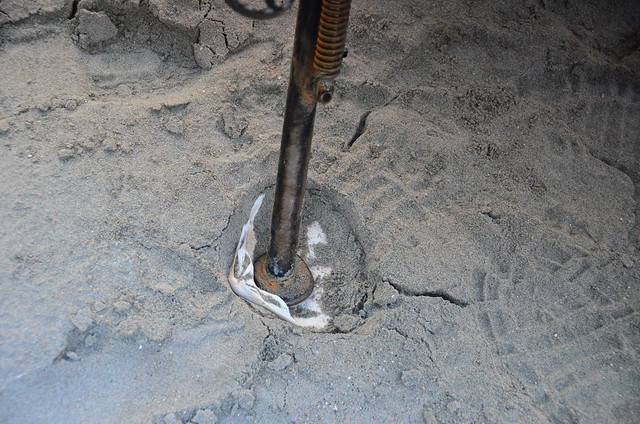 I was quickly warned that cooking in that wind would be a fruitless endeavour and then came the ultimatum. My favourite kasha with raisins or this camping spot by the beach. I say both! The coast was lined with thousands of beautiful pearlescent sea dwellings. We took a stroll along the beach and examined our newly found riches. It ended up being not too windy with the rain fly and we even managed to cook some kasha. This cold shore may have been ours for only one night but it will linger in our memory as a morsel of treasure in this flicker of time. 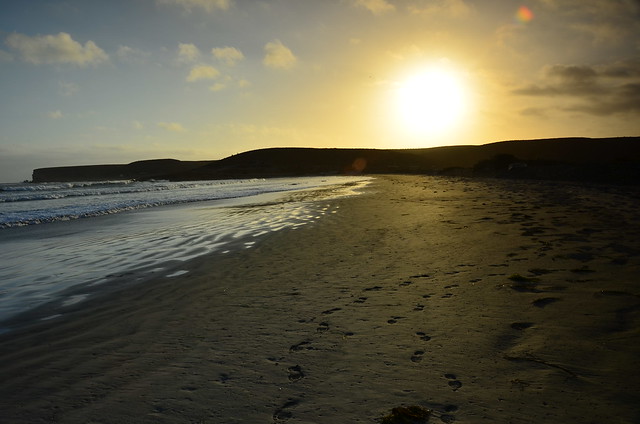 Sunset on an empty beach 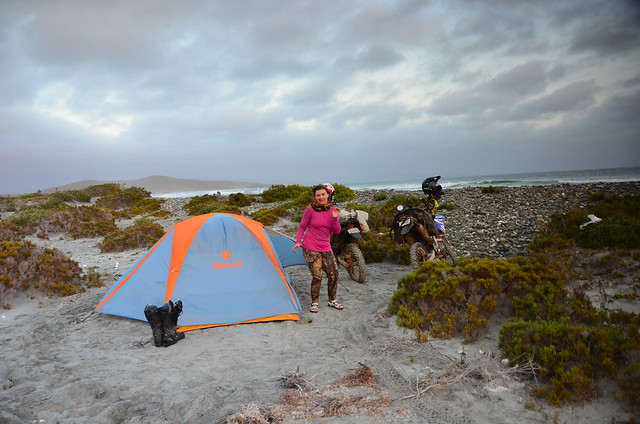