Sometimes life works in weird ways. Back in Olympic National Forest I dropped my bike in a funny way and broke the mirror mount. As our schedule was pretty much non-existent and the chances that this tiny part will just randomly happen to be in stock at the next Yamaha dealer were slim, I just called up the next place I knew we will be in sometime this month: San Francisco. A local dealer there placed an order for the part and I went on my merry way.

Fast forward to the day I was contemplating heading to Crater Lake. Upon closer examination, turned out this iconic landmark is way inland, a few hours away from the coast. Visiting it would take at least a full extra day of travel. Alex was insisting we just push to San Francisco and pick up the mount so I can finally have two mirrors like a normal person. A little disappointed, I agreed. And then he noticed a Yamaha dealer on the side of the highway in a sizeable town with a romantic name North Bend. He insisted we stop and check it out. And in the most unlikely fashion, they had that part in stock.

While there, we also checked the oil level on my bike, and found it lacking. For the last couple of months, even before the trip, we noticed that oil was disappearing from my XT. We were topping it up occasionally, sometimes as much as 600 ml after 1000 km of riding. For a bike with barely more than a litre of oil in the first place, that seemed troublesome. We topped it up again in the parking lot, and I kept wondering if I’m measuring it wrong, or if there is a problem with a bike, a thought I was pushing away as hard as it kept creeping back at me.

For now, seemingly free from mechanical issues, we headed to Crater Lake. 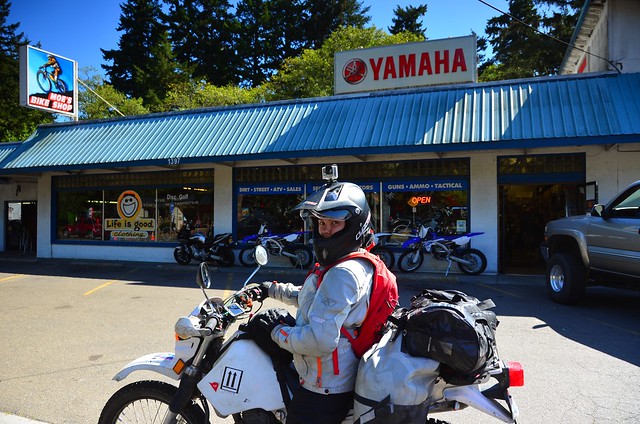 It might come as a surprise, but there are essentially only two ways to get to Crater Lake: from the north and from the south. Either way, it was about the same amount of time to get there from North Bend – 4 hours. We picked to go for the north entrance. We rode off in a fairly direct way, although it still included a lot of twisty mountainous roads. I guess we were looking too much at the scenery and not enough at road signs because we missed the one that said something like “Crater Lake north entrance closed due to forest fires”. 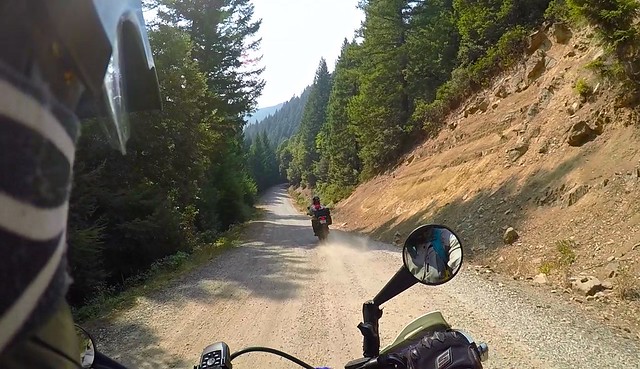 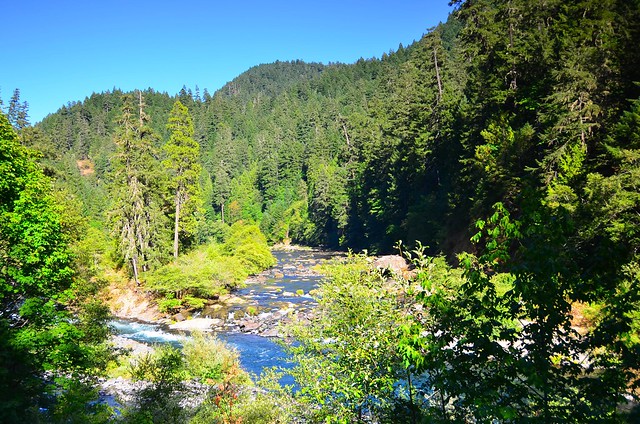 We did see the smoke from the fires – it got quite dense and unpleasant at some points, but somehow we thought we were still going in the right direction. As we were coming to the final turn, mere 10 miles from Crater Lake, there was a road block and police vehicles making sure no one gets into the badly affected areas. It was already getting late in the day, and we had to make a detour that added about 2 hours to our trip. 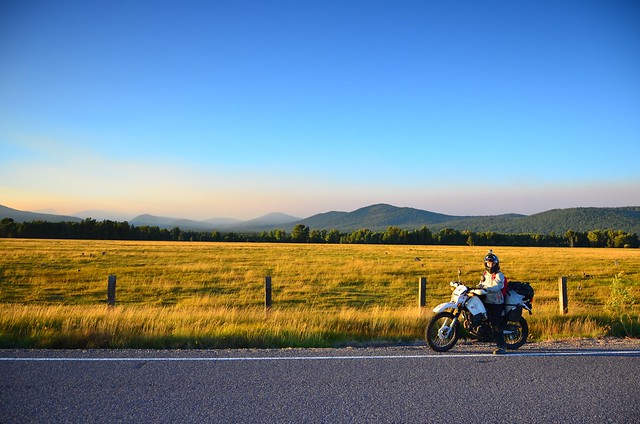 Sunset on the way to Crater Lake

The smoke was getting so thick in some areas, it was unpleasant to breathe. We were running low on fuel and scrambled to find a gas station along the way. Let’s just say, those roads are not littered with signs of civilization. When we finally got to Crater Lake, it was way past sunset. We decided to ride up to the ridge of the lake to see what it all looks like… and saw a big fat nothing, as the entire landscape was covered in smoke. 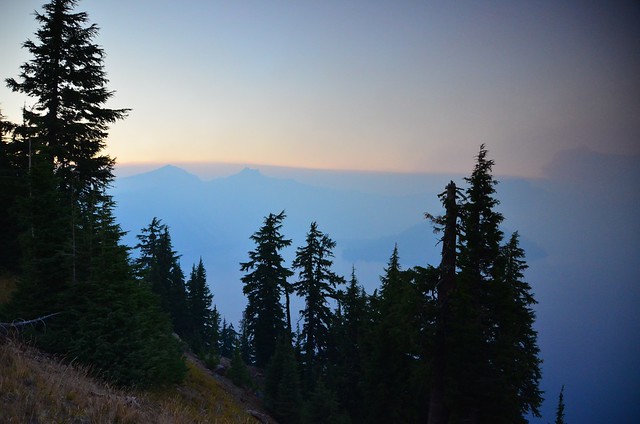 Covered in smoke, Wizard Island of the Crater Lake is barely visible

With an elevation of 1880 m, Crater Lake National Park has much lower temperatures than seaside Oregon. Tired, hungry and cold, we did not look forward to pitching a tent in the dark. The place was fairly busy with tourists and a man in the parking lot of the Mazama Village visitor centre said that everything usually gets booked up well in advance but perhaps there might be a spot left where we could camp. I entered the visitor centre with barely any hope. The clerk clicked around on the computer and declared that there was indeed 1 room left. A room! With a heater and wifi! Don’t tell me how much it costs, just take my credit card already. The wifi was rather flaky, but cell signal was absent altogether, so I used what I could to communicate our delayed but impeding arrival to our first tent space hosts of the trip, in Alameda, right next to San Francisco.

All the smoke cleared out overnight, and as we approached the rim of the lake for the second time, we were treated to an unobstructed view of this geological curiosity. First thing that came to mind – it’s just so huge! It barely fits in the view of our widest lens. 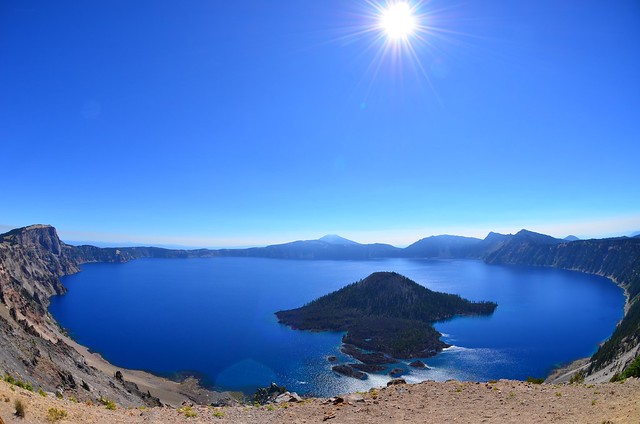 The Lake in all its glory 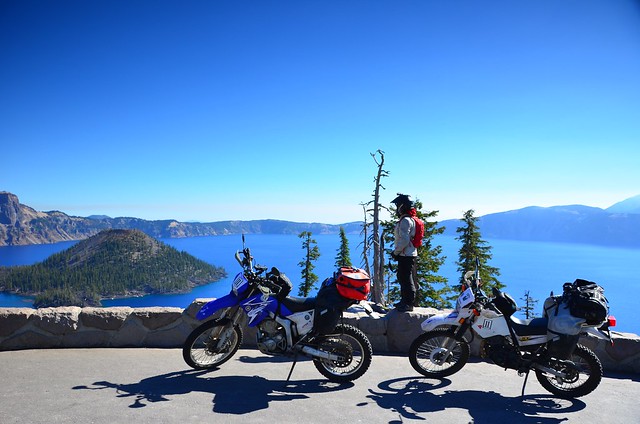 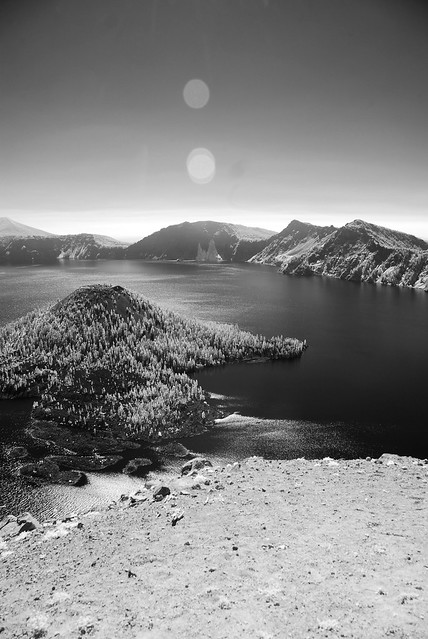 We rode all the way around it, stopping frequently to take more shots. The immediate surroundings were clear, but far in the distance the fires were still ongoing and easily visible. 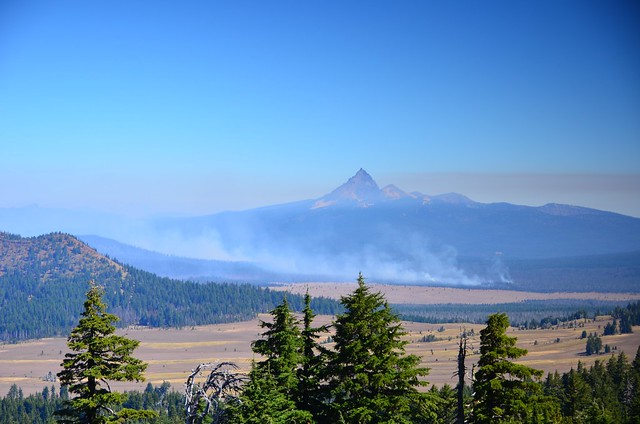 Forest fires are still raging in the distance, with Pumice Desert in the foreground 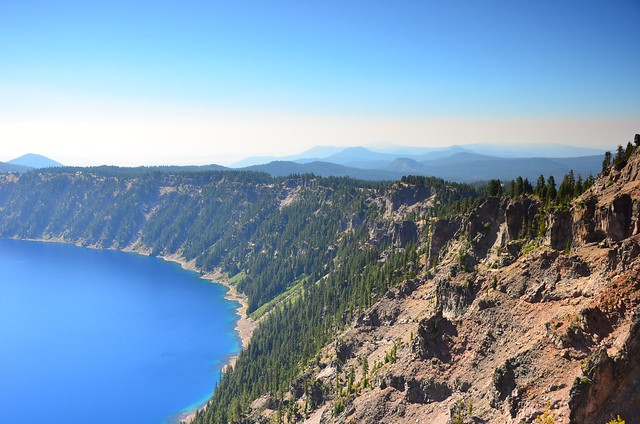 In the opposite direction, it’s layers and layers of mountains as far as the eye can see 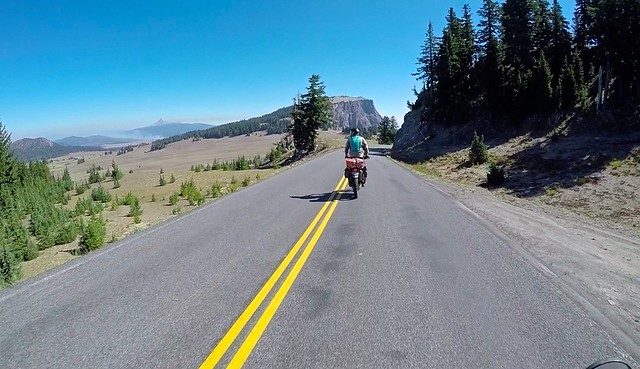 Rim Road edging up to Pumice Desert on the left

After about two hours we were ready to head down to the coast again. The sunny skies and lower elevation left us struggling to breathe the hot air of interior Oregon. The roads led us through mountain passes and views kept changing fast. 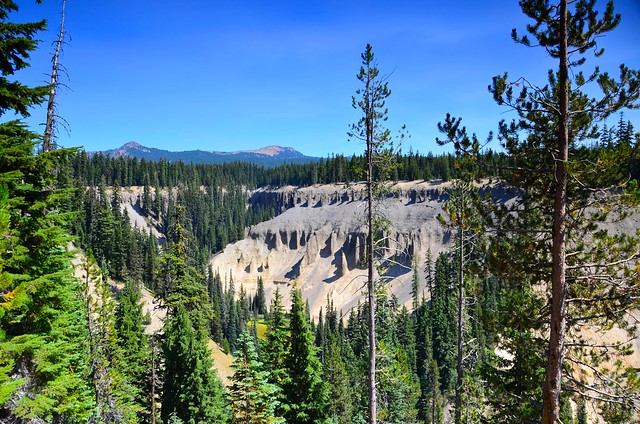 The Pinnacles, formed from ash and pumice, near the top of Crater Lake 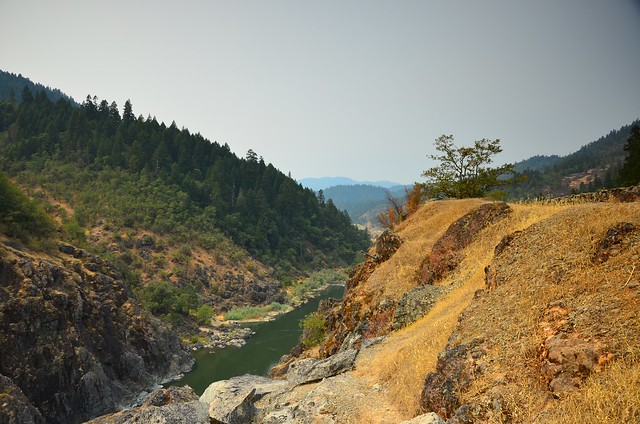 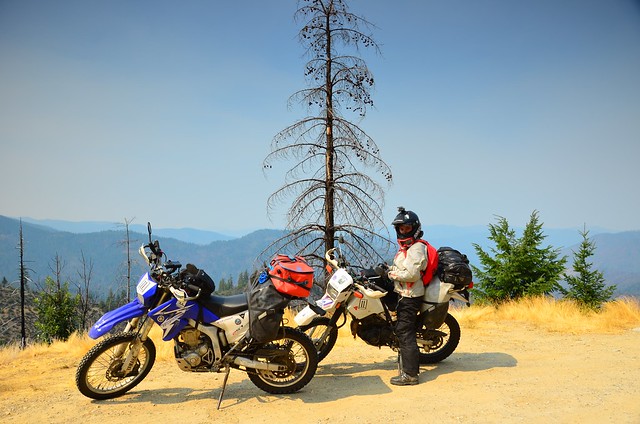 Baking in the sun 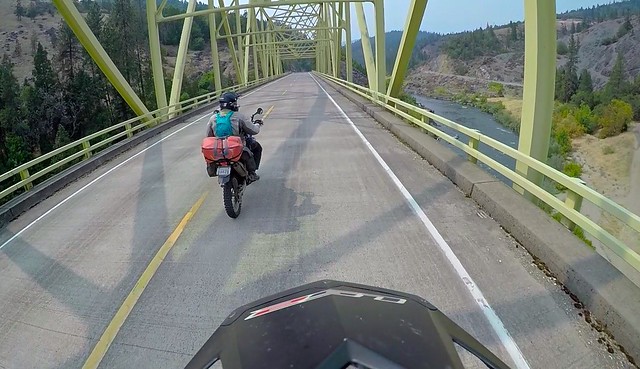 Bridge over the Rogue River

Once on the coastal highway, the cool breeze returned. As we moved further down into California, it became downright cold, and as we entered the Redwoods State Park things took a turn for mysterious and everything got enveloped in thick fog. The road kept twisting through blind corners among the ancient redwood trees, while the cars around us kept going at a steady pace of at least 100 km/h. I was definitely not used to that! With all the fog, I was not feeling lucky enough to go above 80. 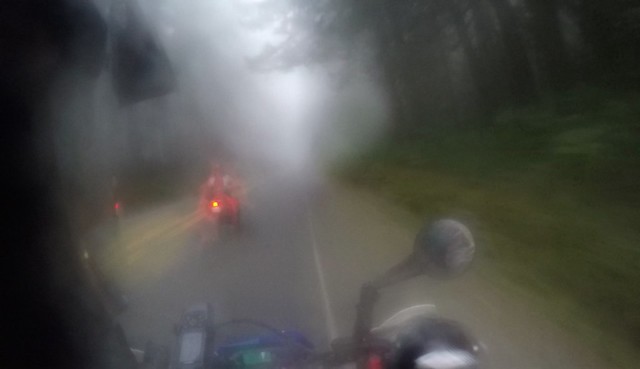 We hoped to camp somewhere among the beautiful redwoods, but every park campground we passed was fully booked. As the light finally ran out we settled for a rather shifty commercial campground, and let’s just say, it was the last commercial campground on this trip. It was full of the most inconsiderate characters. The only silver lining I can think of in retrospect is that the following morning we got up at first light and were back on the road way ahead of our usual leisurely schedule.

crater lakemotorcyclenational parksoregonthe western american adventuretravelusa
Riding on the beach, and other Oregon adventures
The Warm Welcome to California