At 6 am the light seeping through the window was strong enough to wake us up. I quickly dressed, pulled up my boots and opened the door to see the tiniest sliver of sun rising above the water. It was one of the most magical sunrises I have seen. 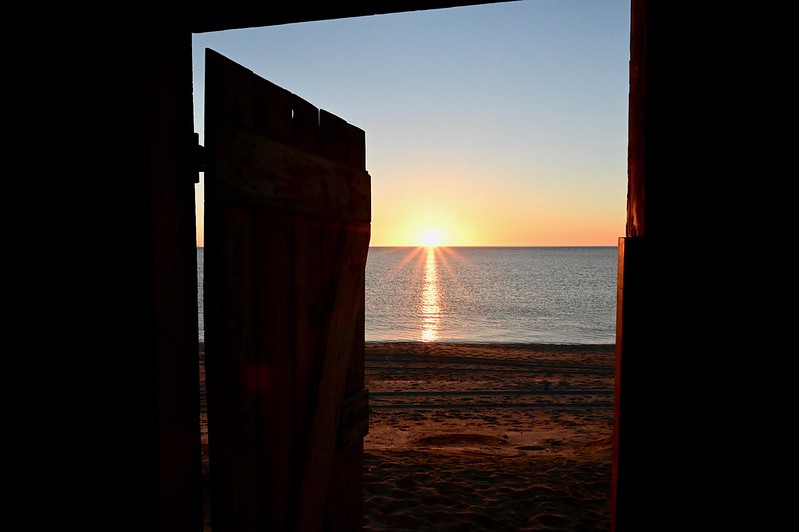 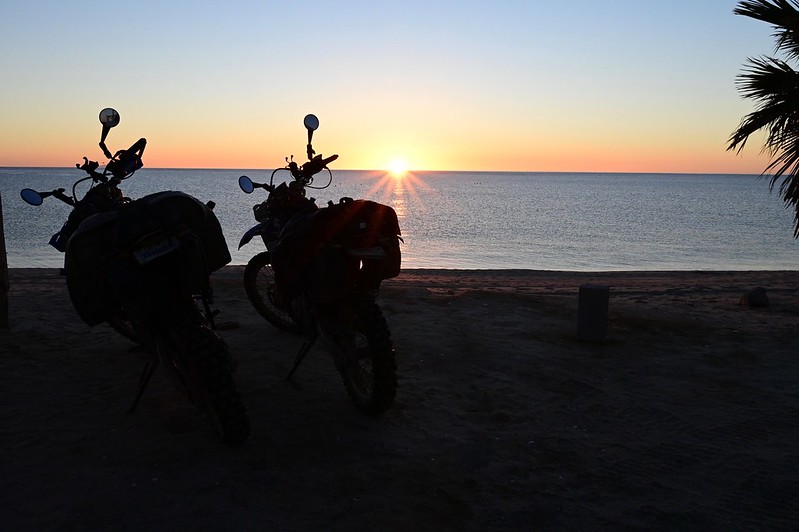 The two steeds enjoying the sunrise. 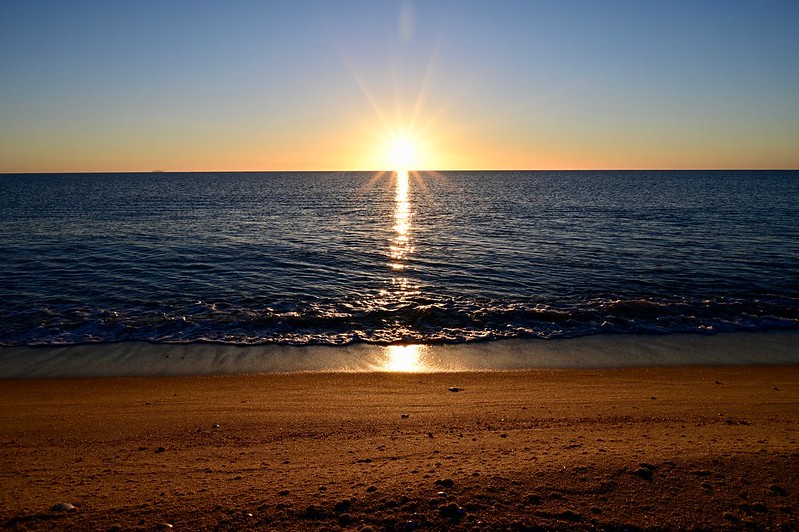 The gentlest of waves greeting the new morning

After breakfast the three WR250Rs went out for some fun in the sand – running up and down the beach, giggling and screaming. Matt and his Africa Twin waited it out. Size does matter, and in this case, the smaller the better. 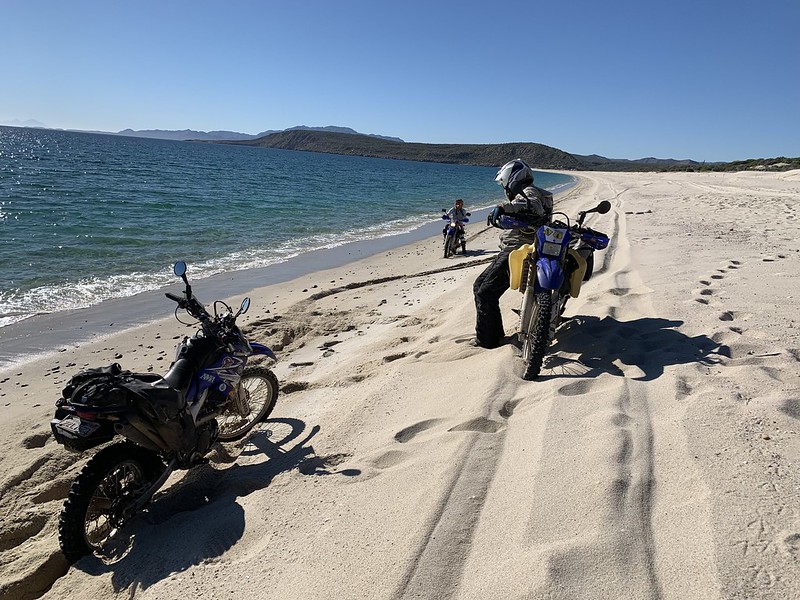 The three amigos having fun in the sand

Nobody drowned their bike in the water, although there were a couple of close calls. Somehow, riding sandy trails feels very different than riding on the beach. After a while I managed to get up to third gear and gain way better control, but overall it was quite a workout. I drank more water after that short ride than all day yesterday. 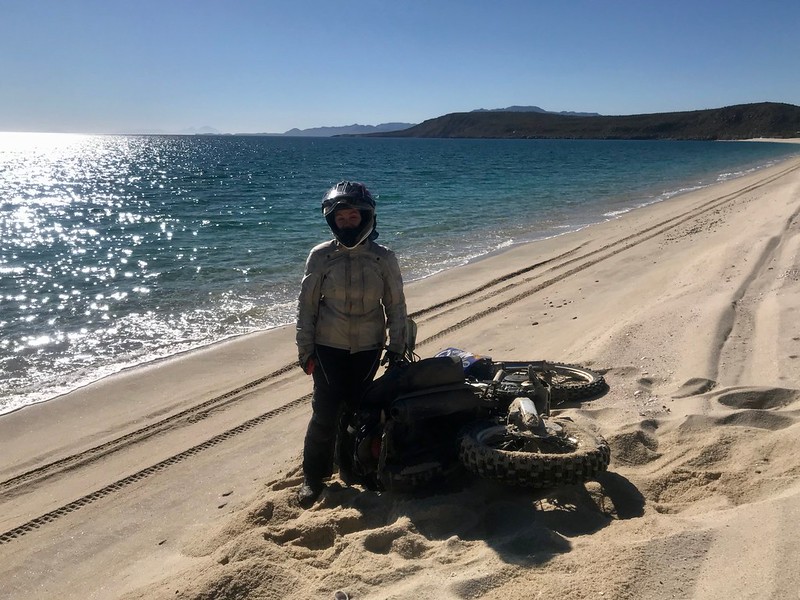 Oops, I did it again.

Paying for our stay and food was a fun experience. This place was run very casually, and there was no set price list, menus or anything of the sort available up front. We didn’t ask ahead of time, because we figured it would be somewhere in the range of “reasonable and customary”. It turned out that the night in the cabaña, together with the meals, was more than what we paid for our hotel and food in Bahía de Los Ángeles, although I was expecting about half as much, seeing how there weren’t any luxuries such as hot water, a private bathroom or electrical outlets. I guess that’s the price of cold beverages and fresh fish tacos in the middle of nowhere. 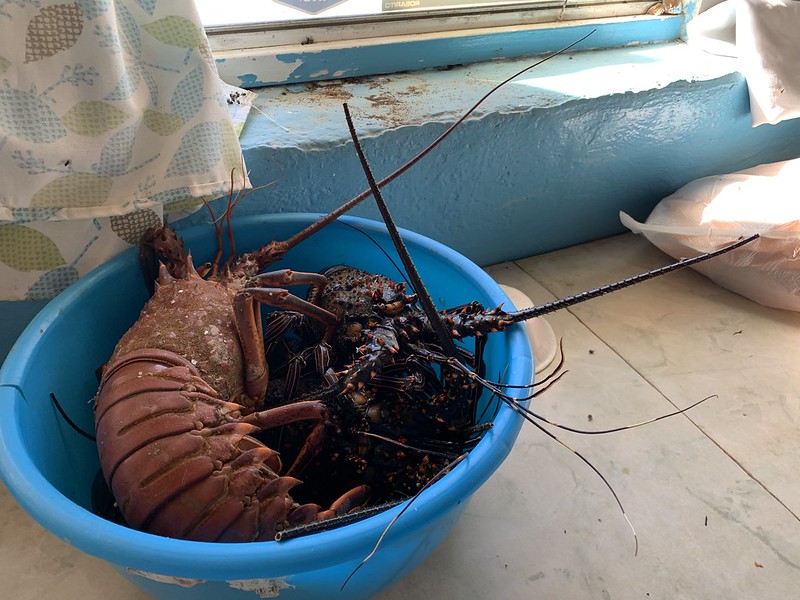 Lobsters! No, unfortunately we didn’t eat them.

After taking a group photo and bidding farewell, we went back to the trail, aiming to reach the picturesque town of San Ignacio for lunch. Not far from where we started, trail splits into two options – the easier one and the sandier one. I was riding up front and picked the sandier one. Aside from being sandy, it was also narrow and lined with cacti on the edges. Since riding in the sand is easier when going fast, I twisted the throttle very generously all throughout. After we were out of that segment, Alex admitted that he was tempted to tell me I didn’t have to go that fast, but was afraid to break my concentration. Good call on his part. 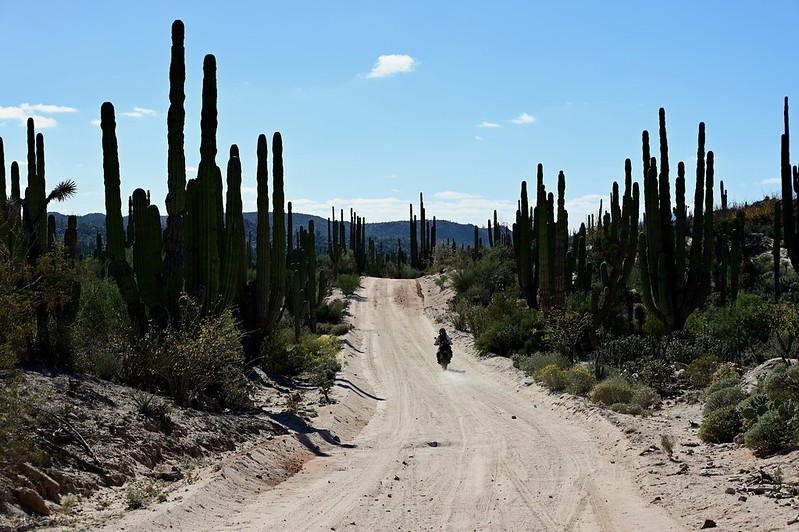 The wide road out of San Francisquito 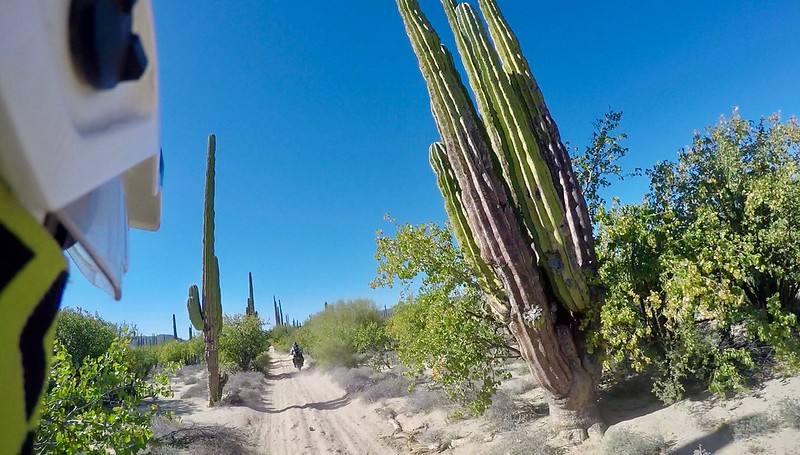 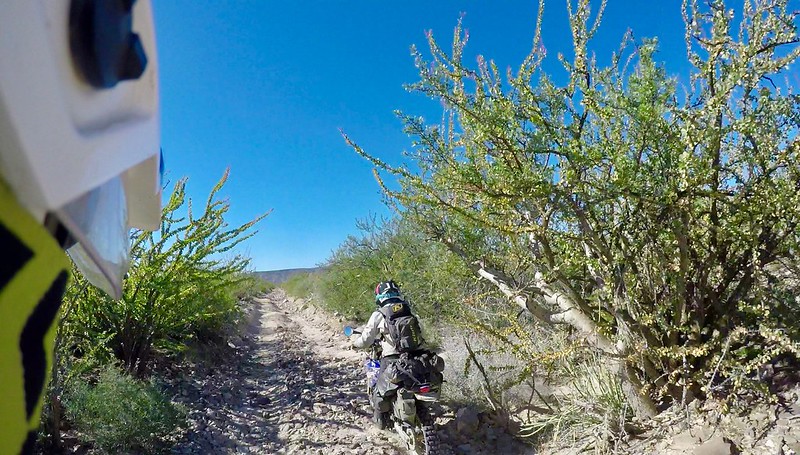 The trail narrows, the green thorny bushes get closer.

There was always a concern that we would accidentally ride over pieces of sharp cacti which found their way onto the trail. My heart skipped a beat every time we passed close to these lethal blobs on the single track. In the end, either we were sufficiently careful, or the slime sealant we preemptively pumped into our tires actually did its job – no flats so far. 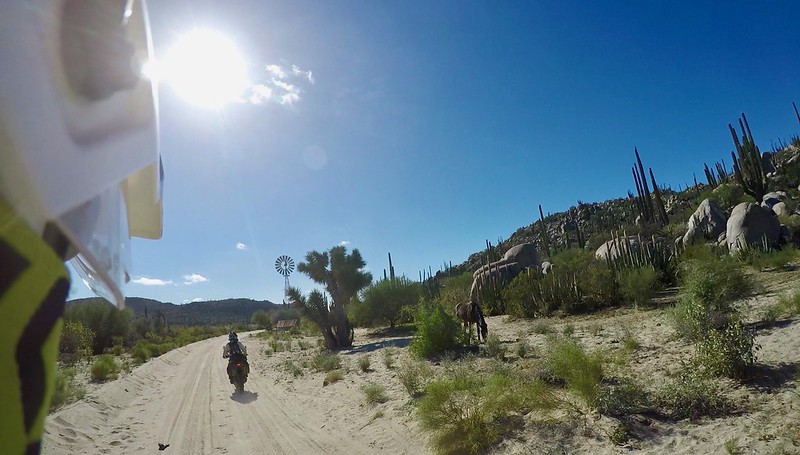 Passing a rancho in the middle of the desert 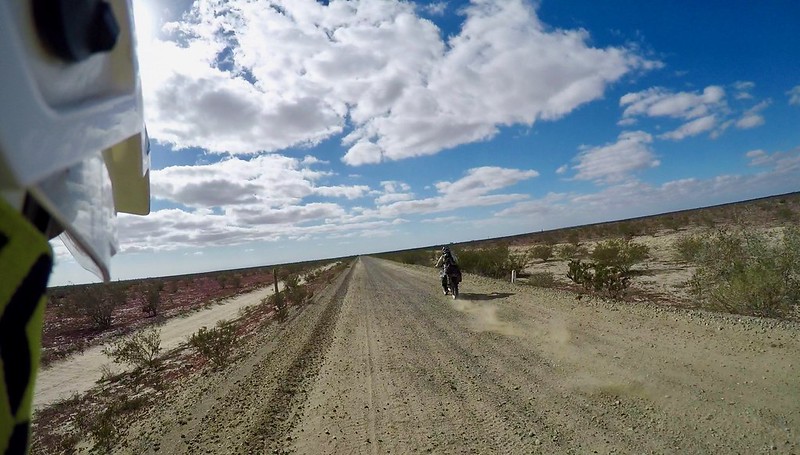 The wide road leading up to the pavement. 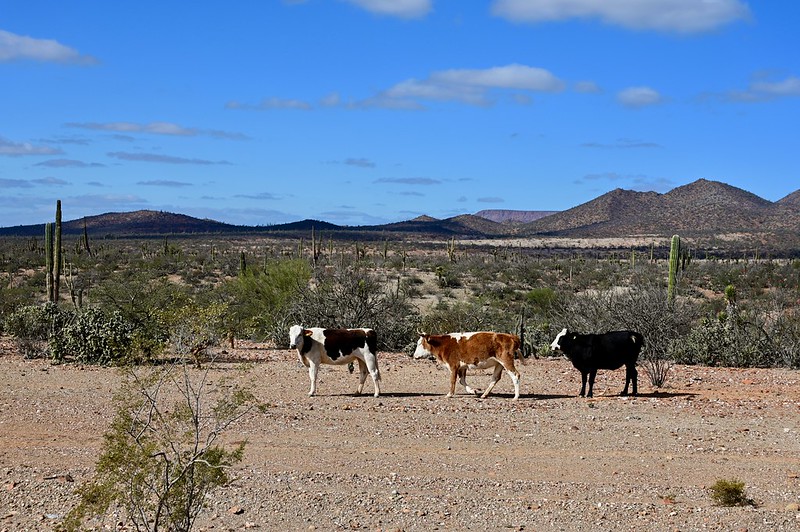 We made it to San Ignacio for a rather late lunch. By the time we finished the delicious seafood, there was one hour of sunlight left – and two hours to make it to our planned stop in Posada Concepción. 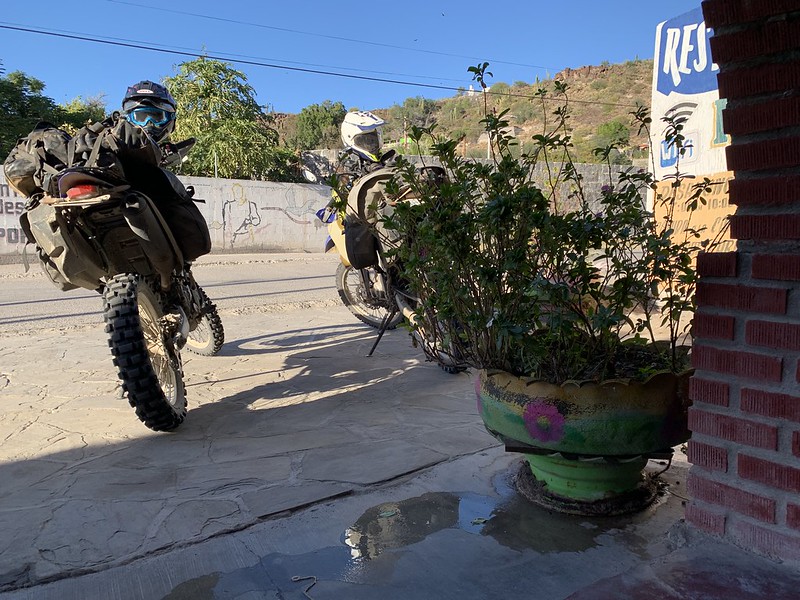 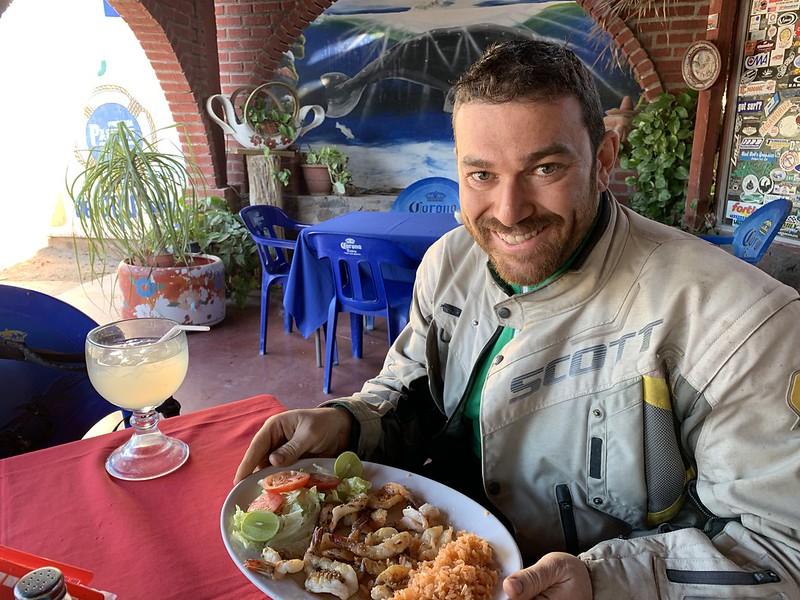 The landscape going east from San Ignacio towards the Sea of Cortez is fairly flat and wide open. The sky was clear, with not a cloud in sight, and the light was delightfully golden. As the mountain ranges got closer, the first prominent peak was a volcano – Las Tres Vírgenes. We noticed a small cloud right by the peak. As the time passed, the cloud moved up over the peak …and disappeared! Vanished, evaporated, left no trace. And just seconds later another small cloud formed back on the other side of the peak. It too, glided up and was promptly consumed by whatever invisible cloud-destroying force was present on the other side. This went on for a while – until the striking volcano was no longer in our view.

As the road started twisting up the mountains, we noticed the cars going in the opposite direction were flashing their lights at us. At first I thought it just seemed that way, as I could not understand why they would need to do that. Soon enough it became clear – they were warning us about cows on the road. I don’t mean cows walking somewhere near the road. I mean on this twisty, narrow two lane road, with a sheer wall on one side, and a steep drop off on the other, there were cows peacefully grazing on the tiny patches of grass that were not even wide enough to be called “a shoulder”. They did not seem to care about impeding traffic, or how dangerous their positions were. One was standing on the road, stuck between the cars and the steep wall. It seemed she was trying to decide on a good time to cross the road – and ended up doing it right in front of Alex, much to his amusement.

The town of Santa Rosalía is notable for having a landfill nearby – which makes it stink. Not the most pleasant place to be, although if you hold your breath it looks beautiful in the fading light.

Once we left its streets behind, it was finally nighttime. Another hour later, in Posada Concepción, I used most of my cash to pay for our room, and eagerly headed for the shower. I waited for no less than 10 minutes, but the water was not getting hotter. The pressure was pretty low too. Disappointed, I took a quick shower and headed out to complain. In response, Pepe, the man managing the property, apologized profusely, promised to turn up the water heater and moved us to a different – bigger, better – room. Alex ended up having a long hot shower. There is a lesson somewhere here about properly timing your complaints.