The last item on our agenda before heading straight home was Denver. There was something different about this place. Look at it: 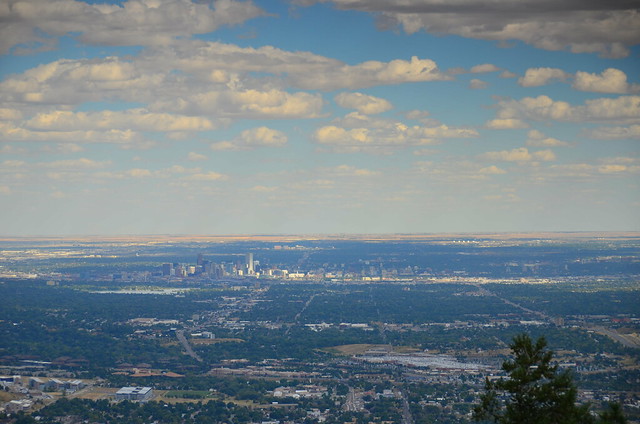 We had a day to kill before our bike paperwork was supposed to be available, so we planned to ride around a bit. Those plans fell through somewhat because I somehow managed to get sick. I was feeling very tired and somewhat irritated, so we only rode for a small while, stopping in Windy Saddle Open Space Park, which overlooks the small town of Golden, as well as downtown Denver. 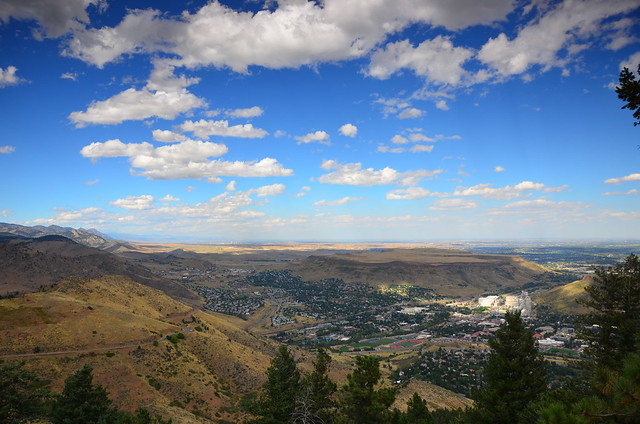 What becomes painfully obvious from this vantage point is that looking east it’s all flat as a pancake. The mountains are over.

Since we were now in a big city, we decided to check out some motorcycling stores, tried on some fancy apparel and got a message back from a local advrider member regarding tent space. As it typically happens on these occasions, we spent a really long time chatting about all sorts of things, drinking wine and testing out the precision door closing mechanism of a vintage Porsche. My sore throat was occasionally getting in the way, but the conversation was too engaging to retire early.

The following day we finally were ready to head home. With the bike registration in our hands, we filled out all the necessary export/import forms and set out towards Kansas. There are very few photos of this part of our journey, aside from some buffalo grazing next to the road. 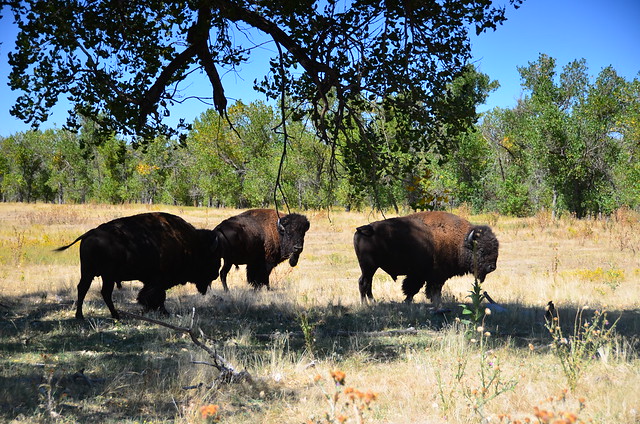 Buffalo grazing by the side of the road

We camped in a quiet park in Nebraska, and by morning I was feeling so miserable, I decided to actually go see a doctor (which never happens unless I break something). After some running around we figured out where to find a doctor: not every small town has a clinic, or as they call them around here, urgent care center.

The doctor did a few very quick checks and concluded that I have strep throat. The solution was an amoxicillin prescription. And this is where the most exciting event of this segment happened. It started drizzling a little, and apparently Alex forgot how to ride in the rain. He turned a little too hard, slipped and fell. There were sparks flying when his foot peg scraped the pavement. It was the most riveting thing I’ve seen all day. No harm done though.

We picked up my prescription and eventually made it to Iowa. Here I was completely disappointed by a restaurant meal that was promising me chicken liver. I was envisioning medium rare, wine sauce-covered delicacy, but instead got deep fried, dried up pieces that scratched my inflamed throat. Oh, American cuisine is just so special sometimes. The landscapes were all a blur and the roads were painfully straight.

At this point I was just wishing this all could go by quickly so that we can end up in Toronto. Aside from flat boring roads, we were also racing against the clock as far as wear on some key bike parts. The chain on my bike was so loose and noisy, I thought it would give in and break at any moment (spoiler alert: it didn’t). The final night we stopped in a town called Kalamazoo. That name was the most exciting thing that day.

When we reached the border we had the questionable pleasure of having to deal with two sets of customs officials: the Americans, to export the motorcycle, and the Canadians, to promptly import it. The Canadian side was much smoother, but I’m not going to dwell on how stereotypical and expected that experience was.

There are many lovely ways of getting from Detroit to Toronto, and we picked the most unoriginal of them all – the glorious 401. The next day is a Monday, with work and other obligations kicking in. I will be left with a weird sensation that I don’t belong in the office, that all those boring highways of the last 3 days were actually more fun than sitting behind a computer and pecking at the keyboard.

I will wonder if I will ever get to ride the beautiful Californian roads again (spoiler alert: I will). I will make plans for more trips, some of which will happen, and some will fall through spectacularly, to be replaced by things I did not even imagine on that anti-climactic Sunday, when we were sitting in a Tim Hortons parking lot on the side of 401, eating muffins, because no trip back to Canada is complete without a Tim Hortons. 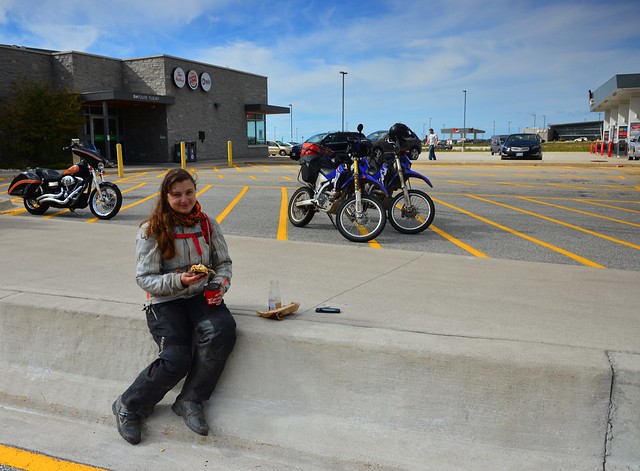