In the morning we indulged in the typical American road tripping breakfast – eggs and hash browns. Much more satisfying than yesterday’s squished turnover. I had another point of interest in my GPS, which I hoped would be a little less demanding than the White Pocket – Alstrom Point. Lake Powell is famous for its beauty and variety of both water and land based recreational activities around it, and some say that point is the most scenic overlook in the area. Is it? 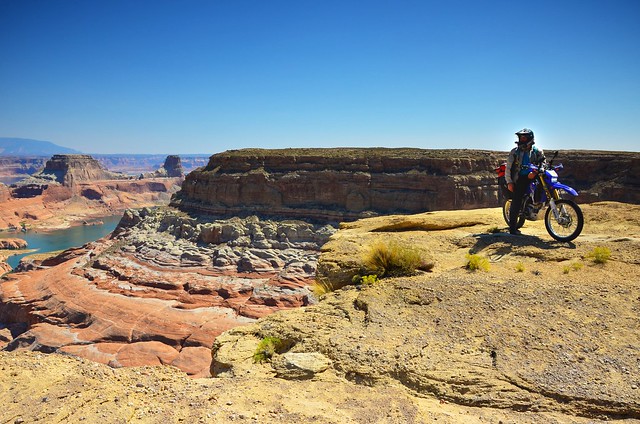 The road to the viewpoint begins near the town of Big Water, it is paved for a bit, then turns into a hard packed dirt road. Not particularly challenging, although I kept waiting for it to throw me a curveball – you just never know what it’s going to become after the next bend. That said, the views were mesmerizing even along the way. Unlike the predominantly red and pink landmasses in the area, this one was all shades of grey and mustard yellow. Vegetation was sparse and the temperatures were rising fast. 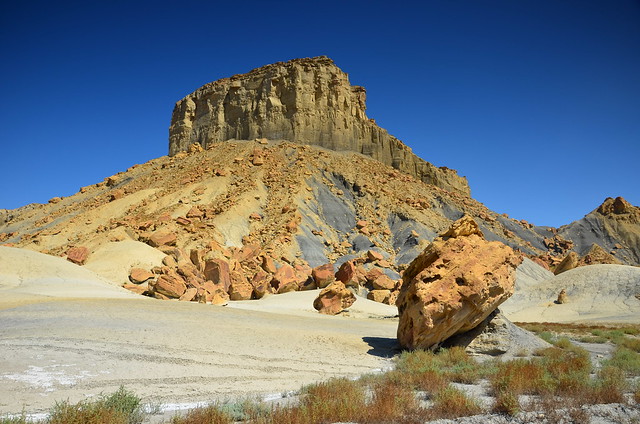 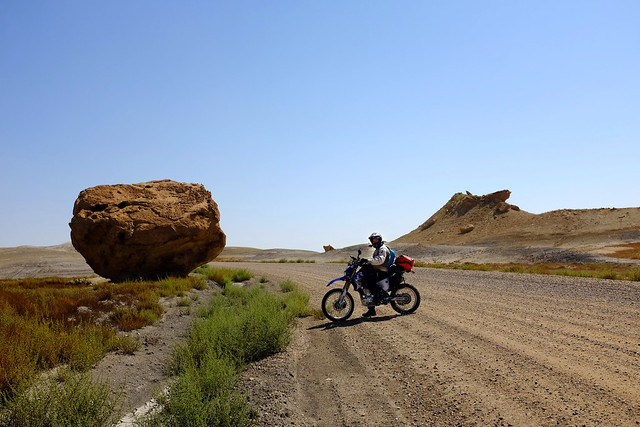 I wonder where that fell from 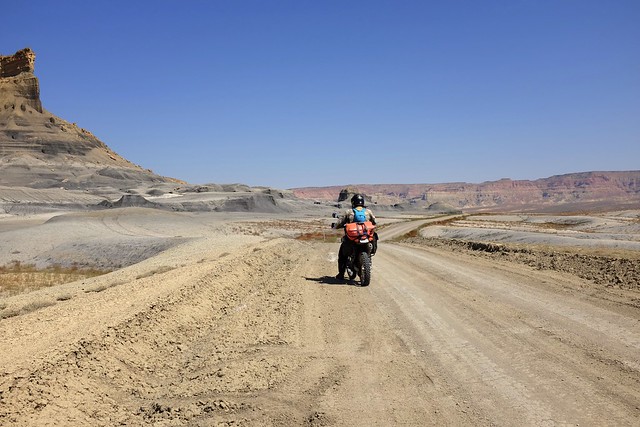 It was becoming trite to exclaim that this looks like another planet. This is very much the same planet, it’s just a lot more diverse than you imagined at the start. The road got a little rougher toward the end, and finally we got to Alstrom Point. Perched up high on the cliffs above the lake, the aerial view was positively surreal. 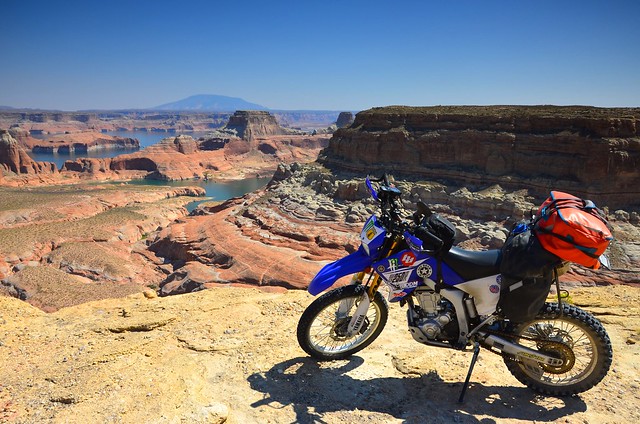 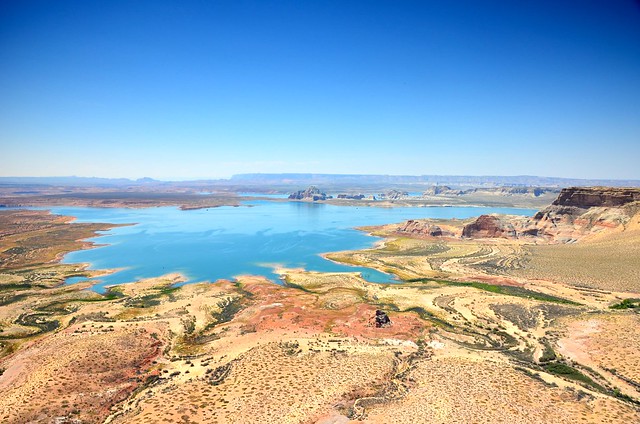 Alex rode around the area, coming close enough to the edges of cliffs that I shouted something not entirely encouraging in his direction. 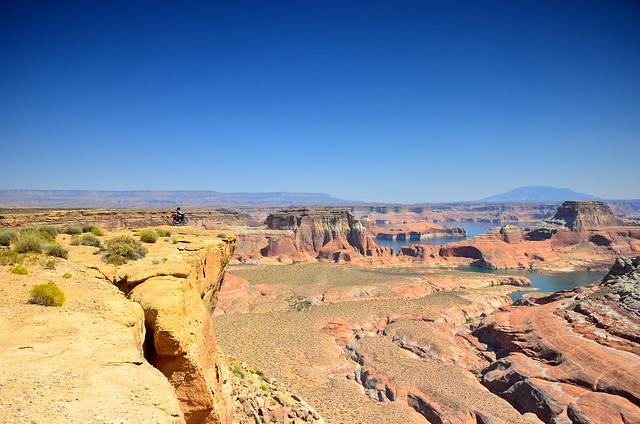 Overlooking the landscape from the cliff edge 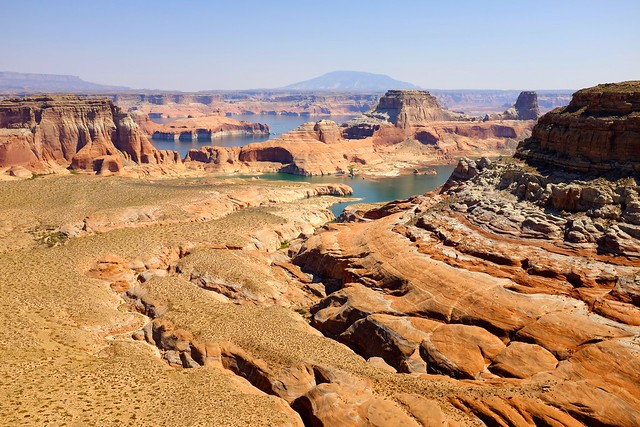 The lake fills up the canyons and crevices in the rocks 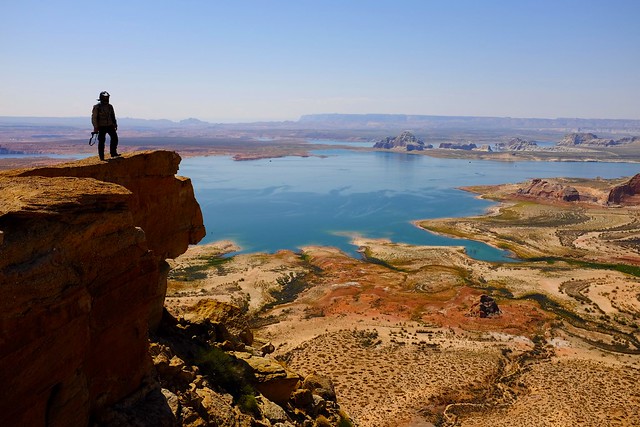 It was brutally hot. Part of me wanted to wonder around taking photos, the other part just wanted to hide somewhere away from the burning sun. It was not quite as bad as at the bottom of the Death Valley, only about 40 ºC or so. We managed to spend about 40 minutes there and hopped on the bikes to return back to Page. 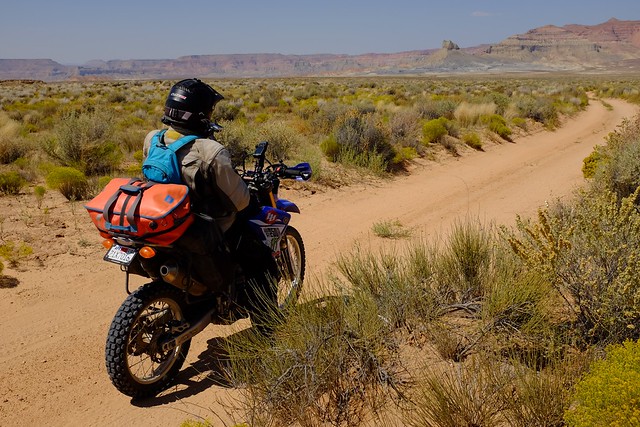 Route back to Big Water 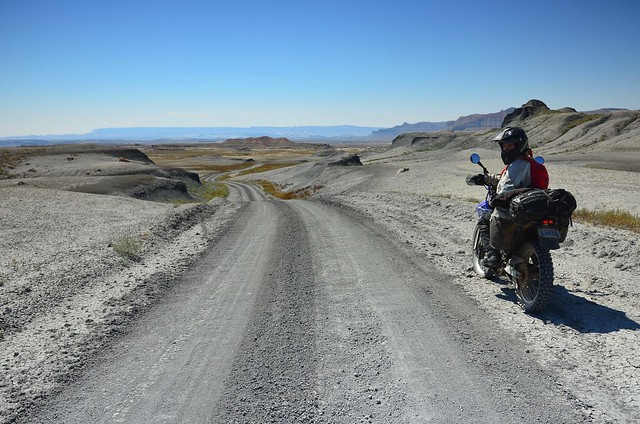 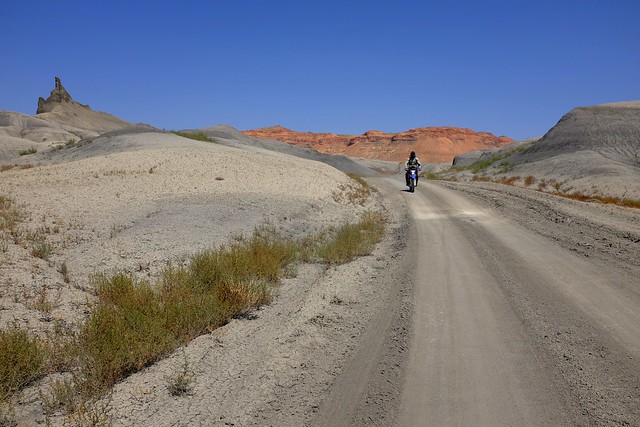 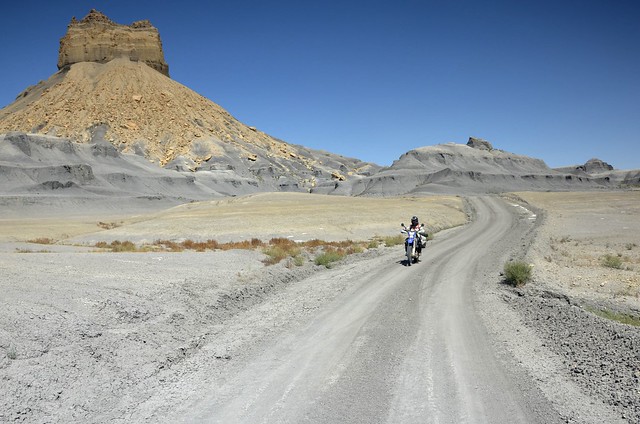 A very imposing rock formation towers over the grey desert 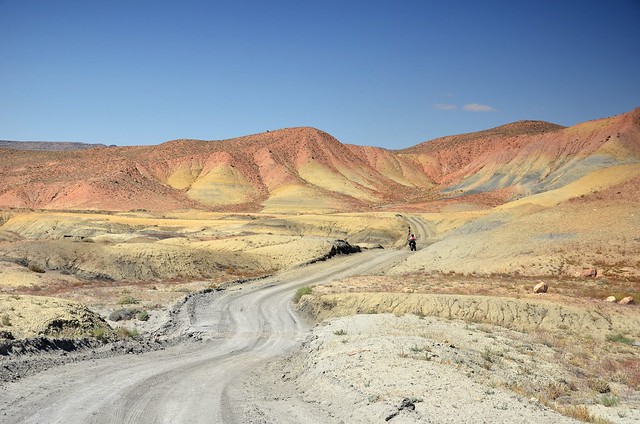 For a moment, the world turns back to pink 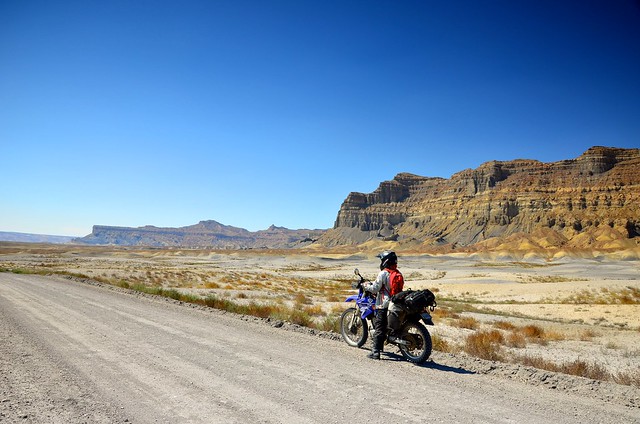 The brown cliffs remind you this is somewhere in Utah

On the way back Alex decided to climb one of the hills near the road. 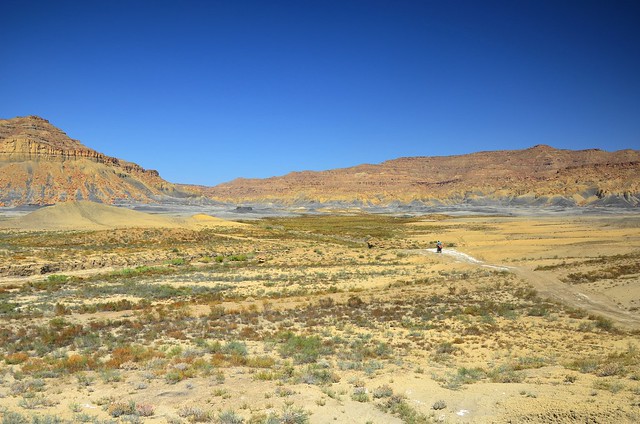 Alex heading off the main road 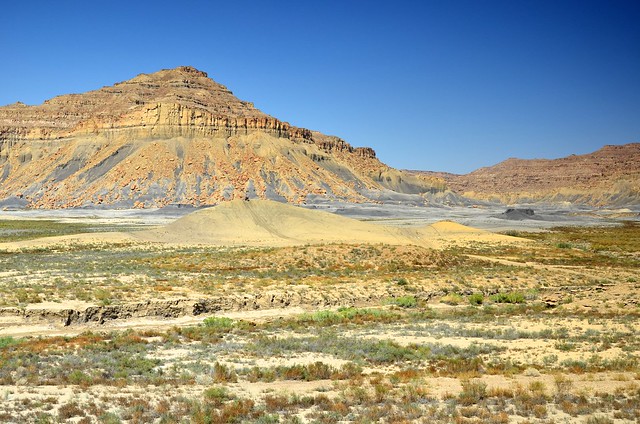 And he’s on top! (Centre left)

Let’s zoom in on that. 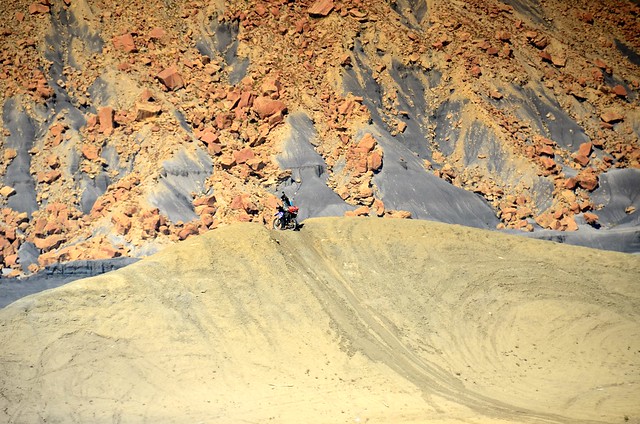 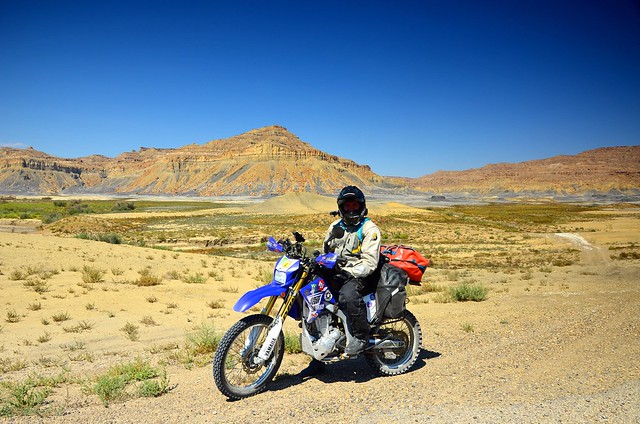 In Page we took an exceptionally long lunch break in an Italian restaurant, Strombolli’s. They had air conditioning and no other customers. It seemed a waste to have it so under-utilized. 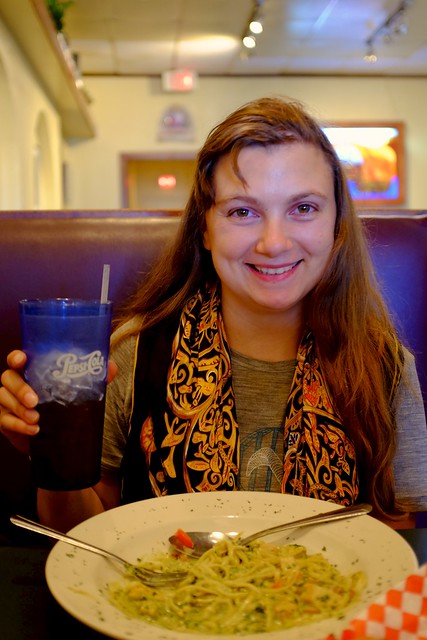 Our ambitious plan was to reach the town of Mexican Hat in the evening, and that meant crossing all of Navajo Nation and checking out Monument Valley before we run out of light. All I can say about Monument Valley is that even if you’re still excited about more red rock formations, it’s surprisingly difficult to take reasonable photos of them from the highway without a fence getting in your shot. But there are tons of tourist facilities along the way where you can hire a guide to go hiking or horse back riding through the park. And tons of tourists, naturally. 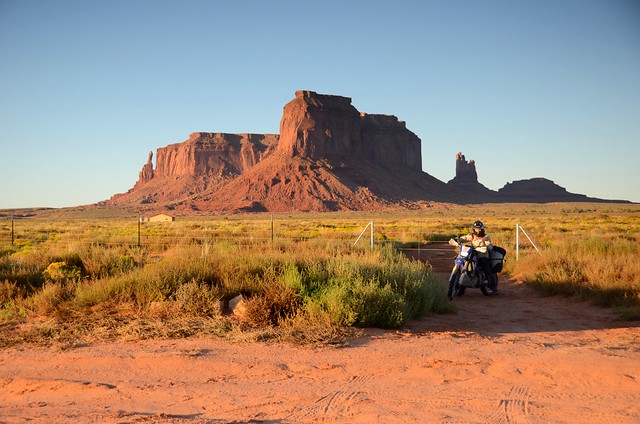 A house in Monument Valley 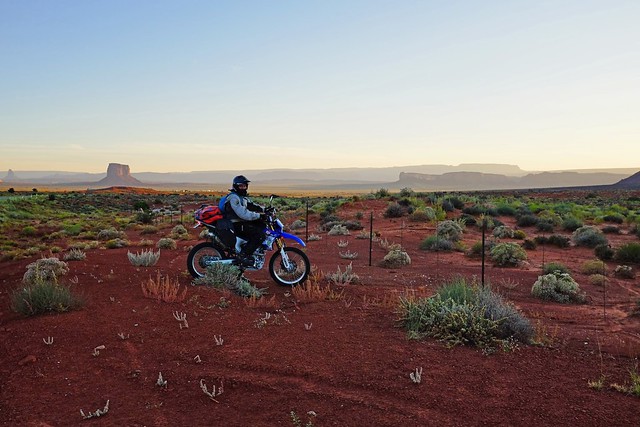 Mexican Hat is so named because of a curiously shaped rock near it. The town sits right on the San Juan River, which is a major tributary of the Colorado River and has some remarkably twisty canyons of its own. We stopped there for fuel and a group of riders on larger dual sports caught our attention. We chatted a bit and turned out they were from Mexico and were exploring the same general areas as we were about to. Small world.

Our stop for the night was Goosenecks State Park, which is so called because it sits on one of the bends of the San Juan River, turned tight like a goose’s neck. There were no fences here, you could set up camp as close to the edge of the canyon as you dared. The views were magnificent and once the sun set completely, we had another treat – Milky Way, with some tea and chocolates. 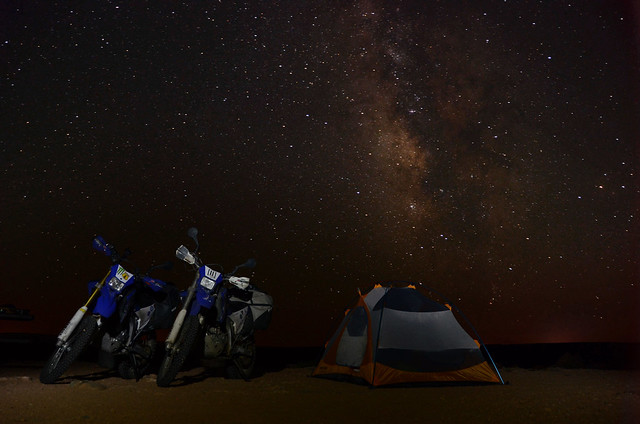