The morning brought heavy rains, but thankfully they did not last long. Soon enough the sun came out, we packed our things on the bikes and headed out. 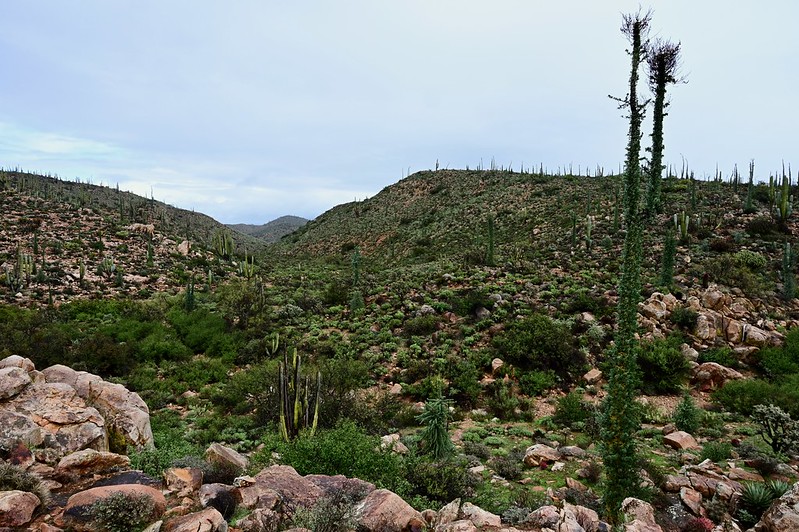 The lush green hills of Baja, in anticipation of further precipitation.

We went into town to get more cash. You cannot survive here without cash. Very few establishments take credit cards, and the pesos can run out quickly when you actually have to use them. Last year, in Bahía de Los Ángeles, we came dangerously close to running out of money. All the numbers in your bank account are worthless when the nearest ATM is 100 miles away and you don’t even have enough cash for gas. We had to get creative and negotiated a discount for the hotel room, on the grounds of the WiFi being flaky. Alex asked the hotel owner how people function in this town without credit cards and ATMs. “Efectivos”, she laughed, meaning cash. Since we were aiming to reach Bahía de Los Ángeles tonight, we knew what to pack.

But back to San Quintin. This town is an absolute mess when it rains. It sits on the main Mexican highway 1, but the shoulders of the highway here are all dirt – and not the good kind. Fine particles of clay-like mud easily migrated from the shoulders onto the road, where they got picked up by the numerous passing cargo trucks, resulting in a dense dirty mist sitting suspended above the roadway. Our luggage, boots, pants and even helmets were quickly covered in a layer of what could be compared to chocolate, if you’re an optimist, or poo, if you’re like me. We used to have mud guards on our bikes, but have long ditched them, because… mud? In California? No way! So our backpacks were filthy too.

We stopped for breakfast at Mamá Espinoza, where we were served some of the most delicious salsa I ever tried. 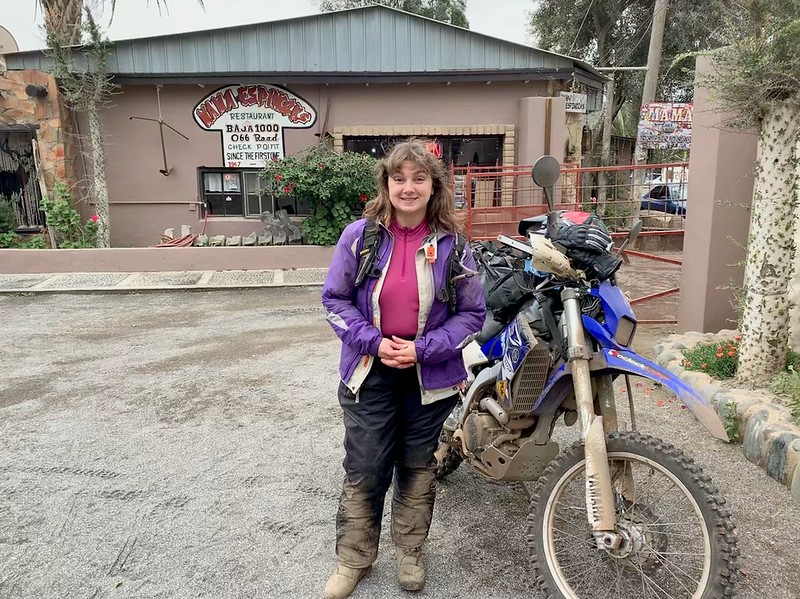 Despite the super dirty pants, we were not given any dirty looks. 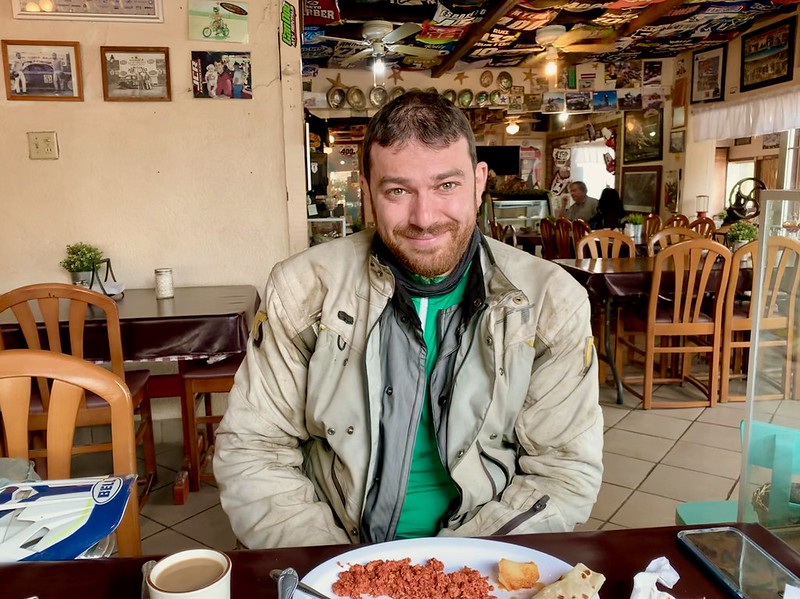 The interior of the restaurant is filled with Baja 1000 memorabilia.

As we rode through a few more muddy towns we were praying for rain. Once we were away from them we could again enjoy the scenery and stop occasionally for photos. During one such stop we met a couple on dual sport bikes from the Bay Area – they were headed to the same town and we figured we might meet again. 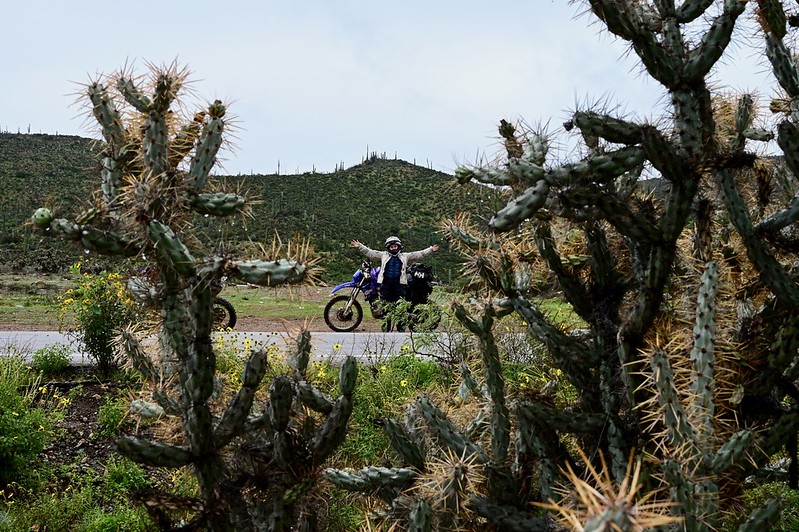 Mind the cacti as you frame your shots! 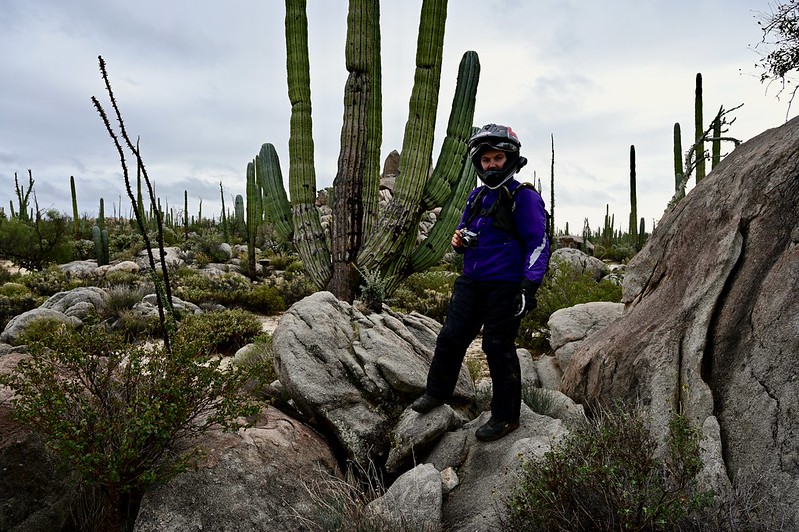 Making a detour through the rocks. 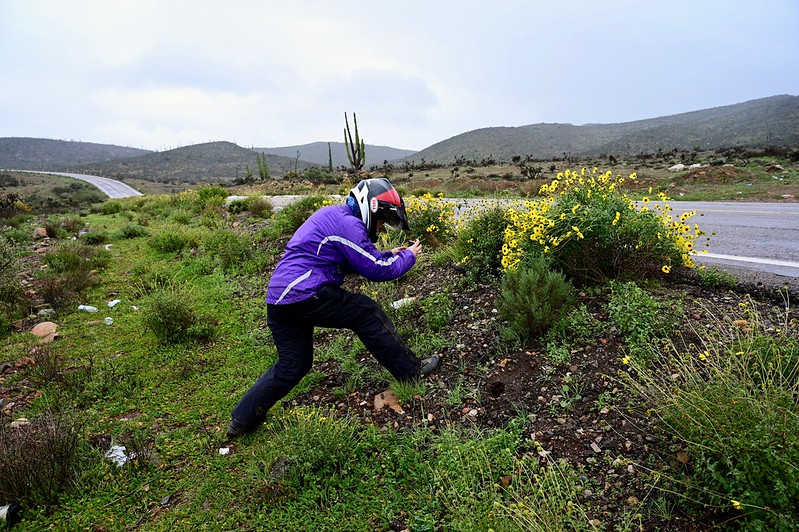 Now Daisy, turn left and look into the distance thoughtfully. 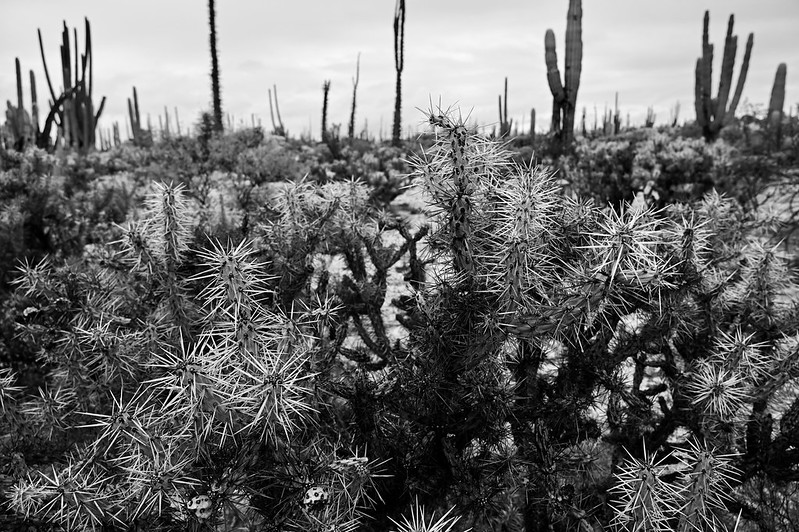 The cholla cactus is not to be cuddled with. 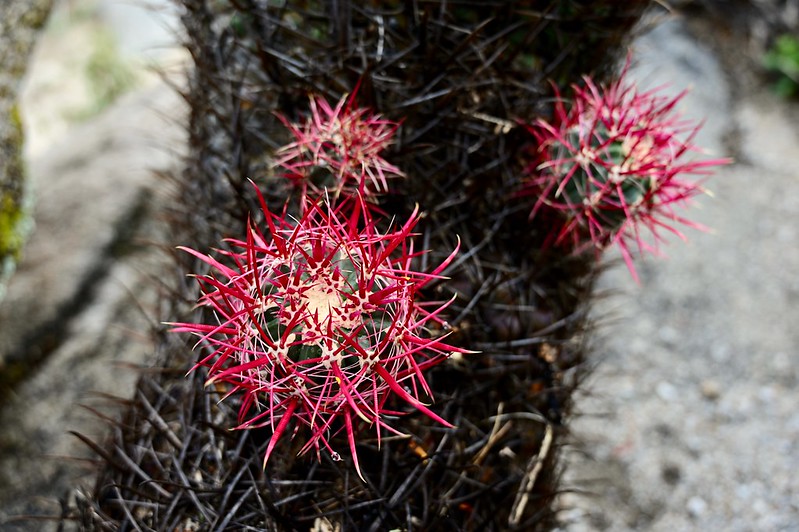 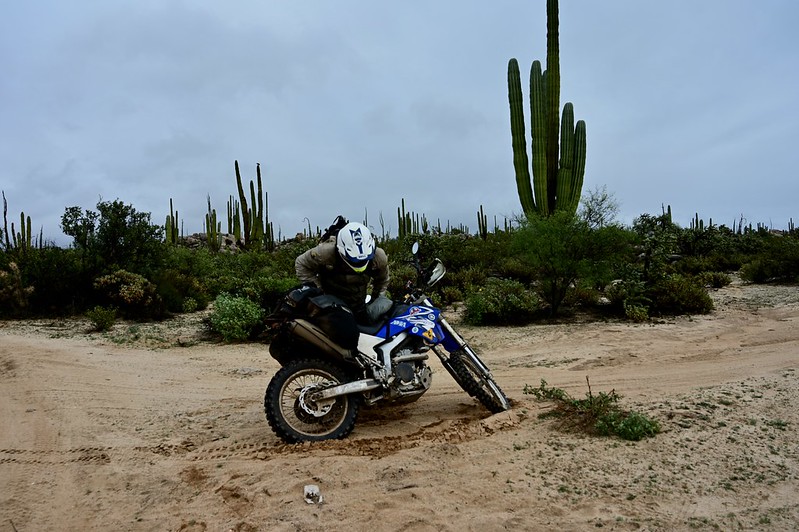 Funny thing, I didn’t technically drop my bike. The sand was too soft and it just fell after I parked it. Twice. 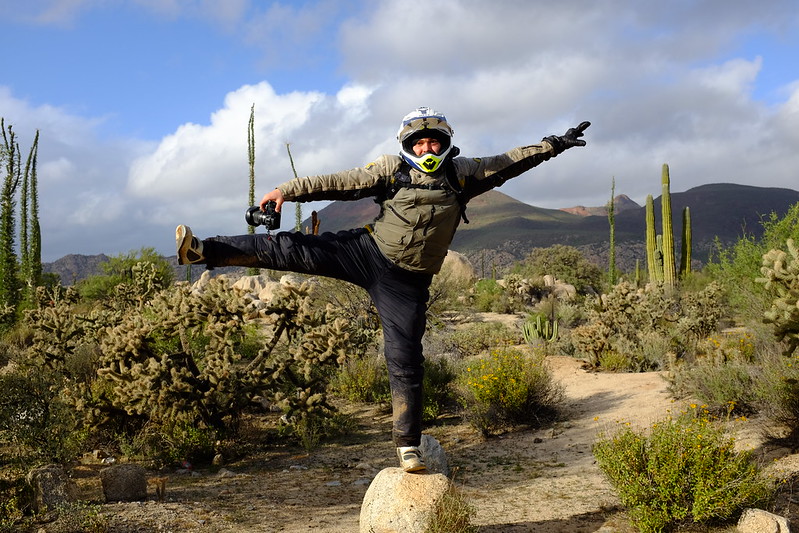 Finding balance is a mental exercise. 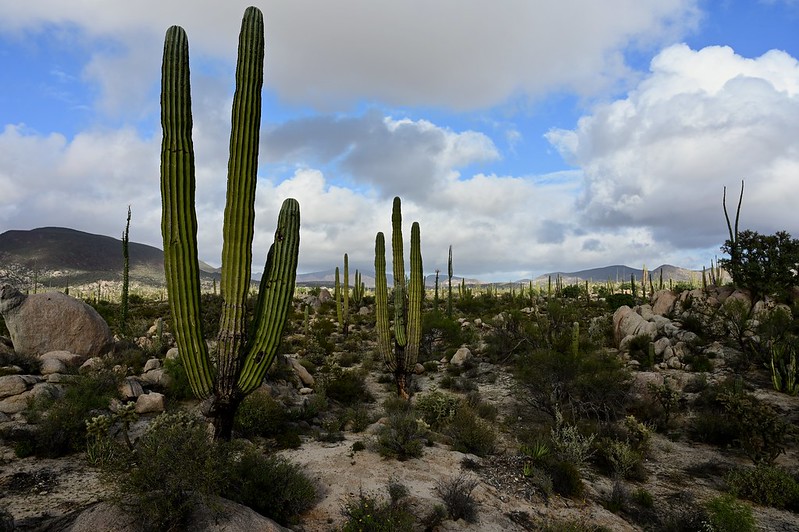 Light and shadows over the desert landscape. 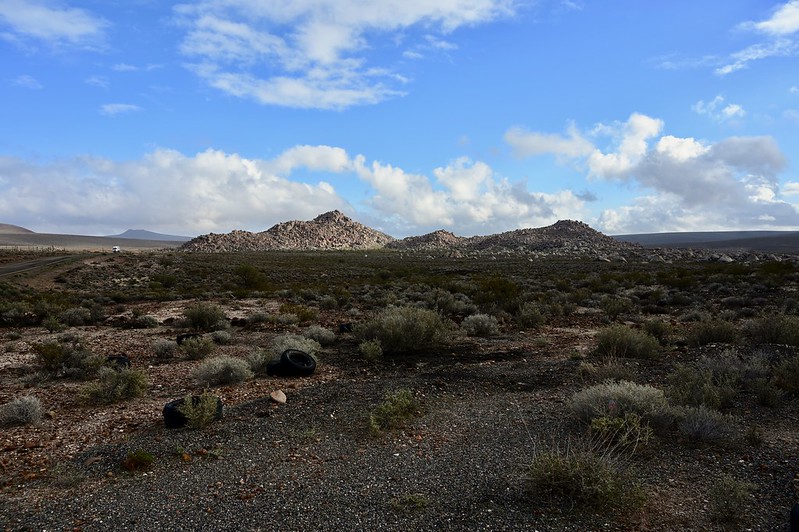 Remnants of a mountain interrupt the flat landscape. 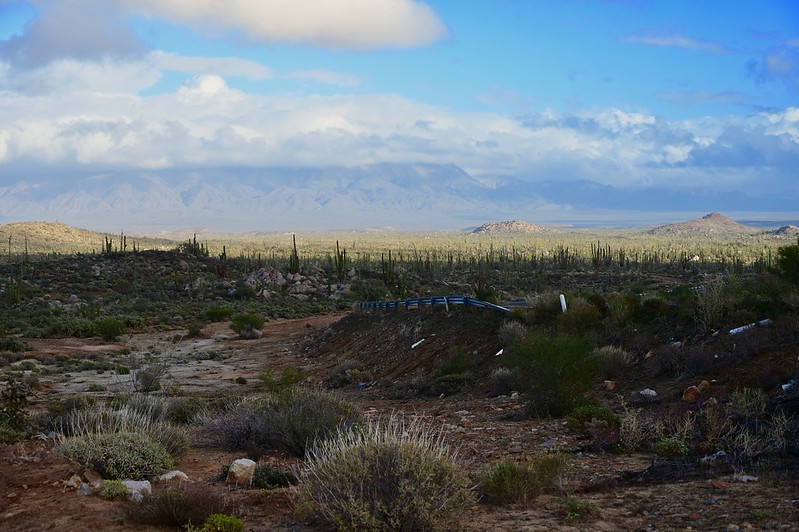 The sun is fleeting and darkness is approaching. We double the pace.

The rough plan was to finish the day with a visit to Mission San Borja, which is one of the more remote missions in Baja, reasonably close to Bahía de Los Ángeles, accessible using an off-road trail only. We’ve passed by it before, but never turned in to actually see it. The whole trail is about 65 km, and while it’s not particularly technical, it still would take over an hour to traverse. Plus another half an hour or so to explore the mission. The sunset that day was going to be at 16:44. When we rolled into the small community at the trailhead, looking to top up my fuel tank, it was 16:15. At this point, we would have to ride in the dark no matter what route we chose – the alternative paved road is significantly longer and would not have saved us any time. We deliberated for a few minutes as I was buying fuel from someone’s personal stash, and then headed onto the trail.

With the sun still up, this trail is gorgeous. It’s fairly easy to ride, which leaves you mental room to look around and appreciate the beautiful desert. By the time we reached the turn off for the mission though, it was getting dark. We wouldn’t have seen anything, so we didn’t turn. We were only half way through, and because riding the trails in the dark is not fun enough by itself, it also started to rain. It was a slight drizzle at first, but it was getting stronger and stronger. Eventually Alex insisted that we stop and put on our rain gear, at which point the rain turned into a downpour, as if it was waiting for us to be ready. The rocks covering the trail became slick, and we slowed down a little to avoid making a mistake on this final stretch. I was curious about my actual speed but the numbers on my speedometer looked like smudges because of the rain drops. It will forever be a mystery. Dodging larger rocks and ignoring the smaller ones, I realized that despite wearing 4 layers of clothing, including a down jacket, I was not overheating. How do you ride off road in Baja and not get hot? This was most unusual. 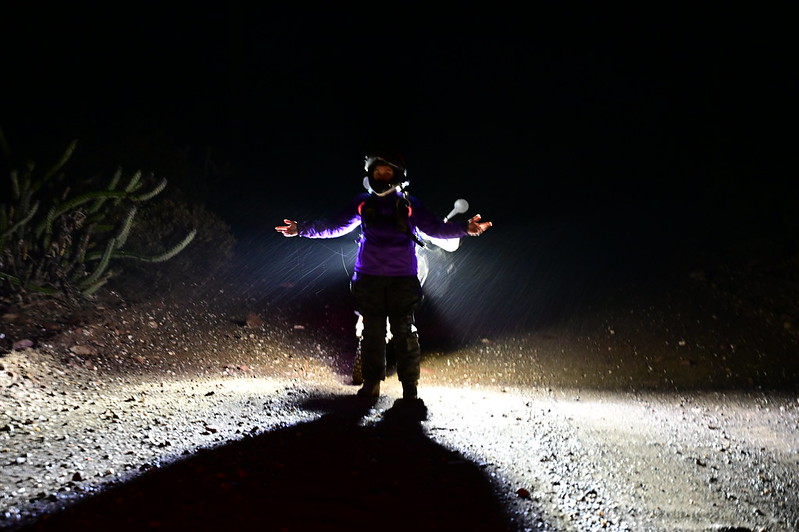 By the time we got on the pavement it was 6 pm. After a few more cold kilometres we got into town and were greeted with total darkness. Due to the storms, the electricity was out in the entire town. Thankfully our go to hotel, Costa Del Sol, had both a room and a freshly prepared dinner for us. Candle light and delicious flautas – what a romantic setting to finish the day. 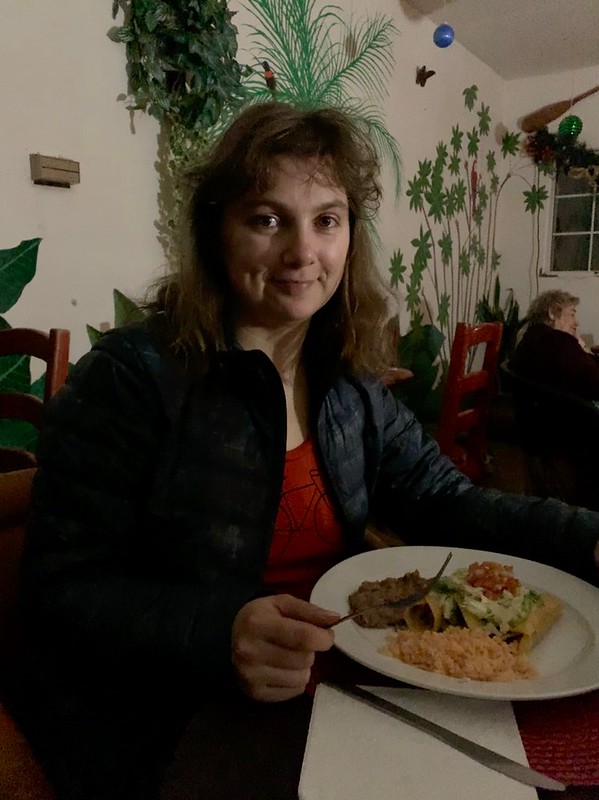 Crunchy flautas were perfect in every way.