The islands of Venice

A whole week in Venice is bound to be filled with way more things than can be safely recalled later. It is unsafe to think too much about your time in Venice because while you do that, time keeps passing, and you can easily spend hours recounting small incidents that only lasted a few minutes.

Our typical days in Venice would begin by waking up in late morning, having a light breakfast and venturing off, usually in no specific direction. Sunrises are beautiful, but sleeping in is a luxury I rarely forgo while on vacation. 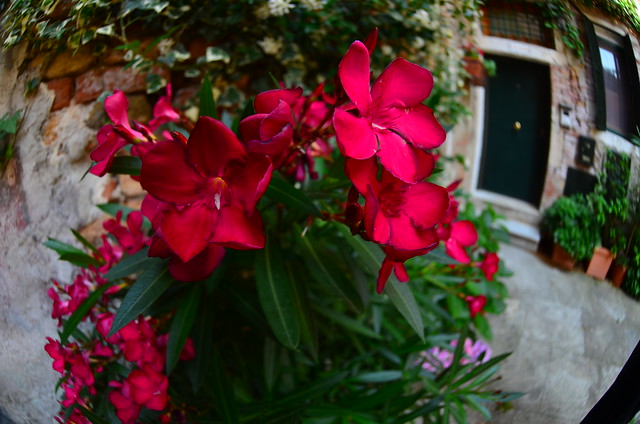 A colour boost awaits just outside. We’d check up on the potted plants whenever we left or returned. They never needed watering – looked like it rained lightly on a lot of the nights.

On the first morning we decided to go find a grocery store. The primary item on our shopping list was some kind of decent beverage in large quantities, because waking up in a place with nothing to quench morning thirst is not fun. Upon arriving at our apartment the night before we were told there is a grocery store nearby, Billa, but no exact directions were given. So I fire up my Google Maps and search for Billa. It returns a location – in Dorsoduro. Ok, does not look too close, but perhaps this city is just much smaller than it looks. So we head off, to the vaporetto, and to Dorsoduro. It only took an hour and a half to get there (but we were not in a hurry, got some breakfast, walked slowly, did not take the most direct route). 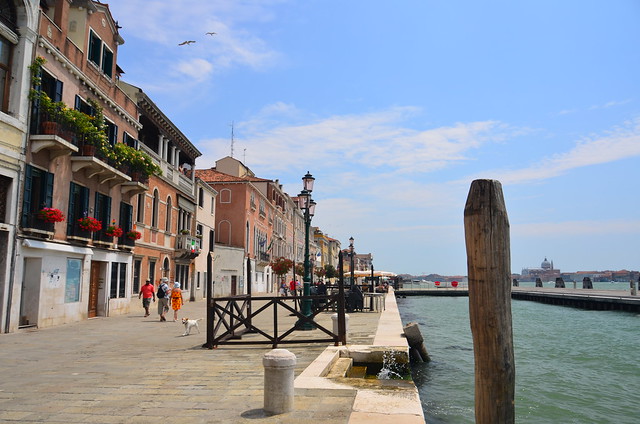 Just off the vaporetto stop. Yes to the pink lamp posts. 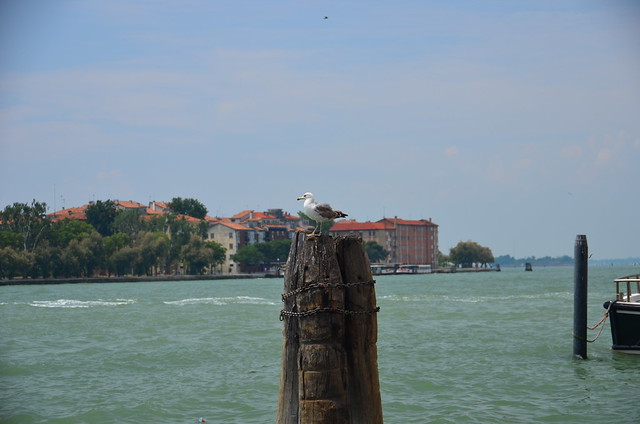 The bird is enjoying the views of Giudecca. Who wouldn’t?

The euphoria levels were quite high. I had a distinct feeling of “I can’t believe I’m really here!” and omg-this-seagull-is-Venetian!

The grocery store had a very small inconspicuous entrance, but was fairly large inside. And this is where we met what would become our best friend for the next three weeks – peach flavoured iced tea. In Italy it’s bigger than the lemon flavoured one. Back in T.O. I checked thoroughly but did not find such a thing anywhere. Another exclusive product: Nivea’s roll-on deodorant. You know how sticks of deodorant have the nasty habit of leaving stains on clothing, irritating, leaving visible ugly residue on skin? None of that. They keep that good stuff away from North America completely, just to make Europeans feel superior. Snobs.

On the bright side, the weather was sunny and not too hot – perfect for wandering around. Which we did. 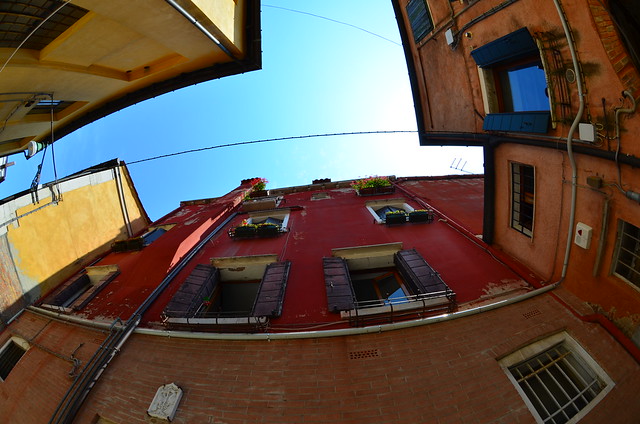 Some of the streets are crazy narrow, you have to flatten yourself against the wall to let oncoming traffic through, although on streets like that there is often not a lot of people at all. But it’s colourful, and it feels that buildings themselves are alive with stories of centuries that passed right by. 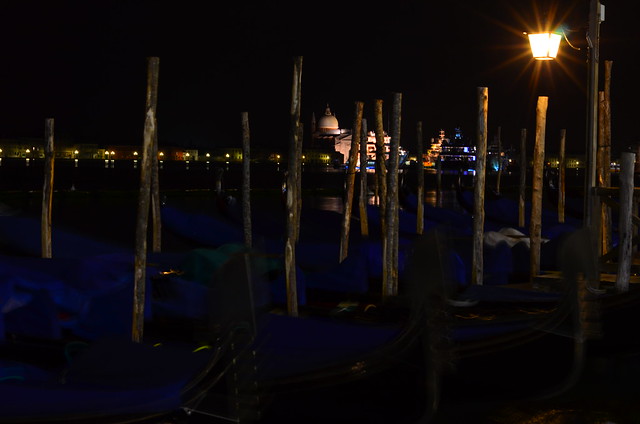 Another typical item – old wells in the middle of small courtyards. Some are fairly plain (Venetian kind of plain, it still looked cool to a person living in an architecturally challenged city like Toronto), others featured elaborate reliefs and ironwork. There is also graffiti – to me it did not look like there was too much, though some people find it distracting. I’m sure Venetians in 14th century would have it too, if only they had spray paint. 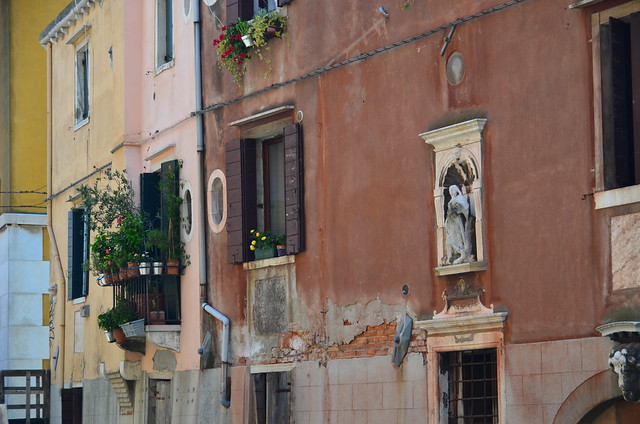 I don’t know how religious modern Venetian truly are, but the history reflected in the surroundings says that religion is a large part of life here. Aside from permanent statues in the walls of many residential buildings, there are also many rather ad-hoc shrines at eye level of houses, walls, in windows and what not. I’m not religious, but I admire how beautiful they make it look sometimes. 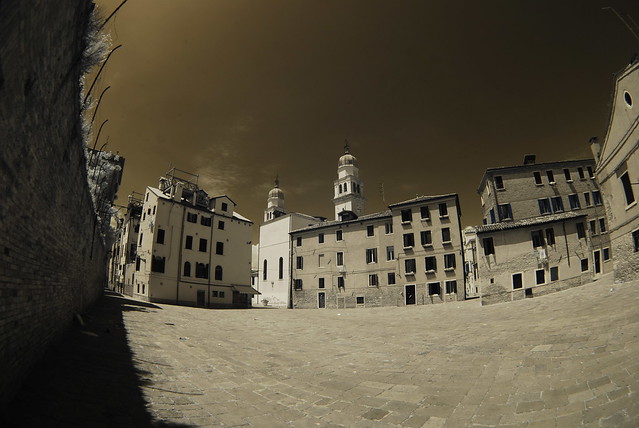 This picture is not like those before it. Aside from a surprisingly empty campo in the middle of busy Venice, it was taken with an infrared camera. We have a converted infrared camera, so there is no fiddling with external filters, long exposures, big pain. It’s very point and shoot, and one thing that gives it away is the light colouring of foliage. 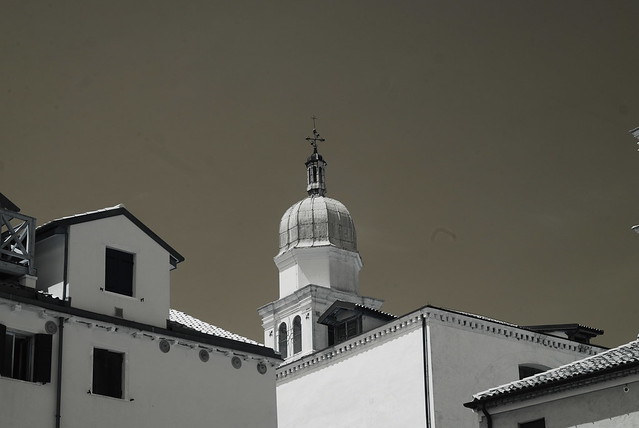 Another thing – crazy contrast. Colours in infrared do not relate to each other the way we’d expect. The sharp difference in colour of the walls and roofs was not to be seen with human eyes. 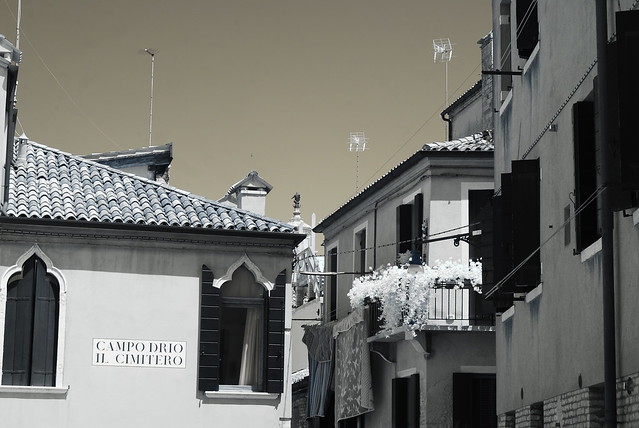 It’s always nice to know that there should be a cemetery nearby. Who needs info desk, just read what’s on the walls. 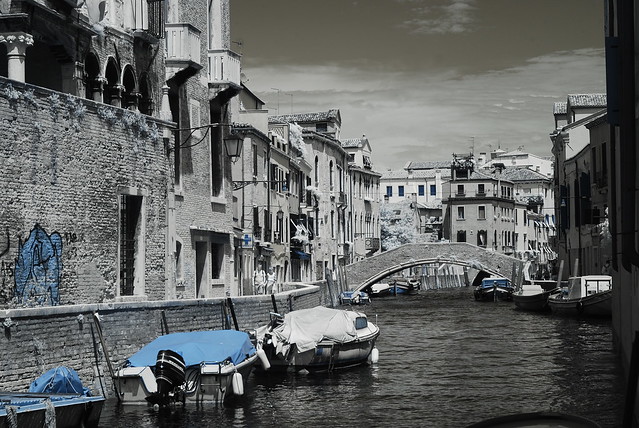 What’s blue, may not really be blue. My hair for example, also looks blue in infrared (it’s naturally light brown with no artificial… sweeteners). Notice how dark the water looks. The idea is that water absorbs infrared – that’s why it keeps heat so well. 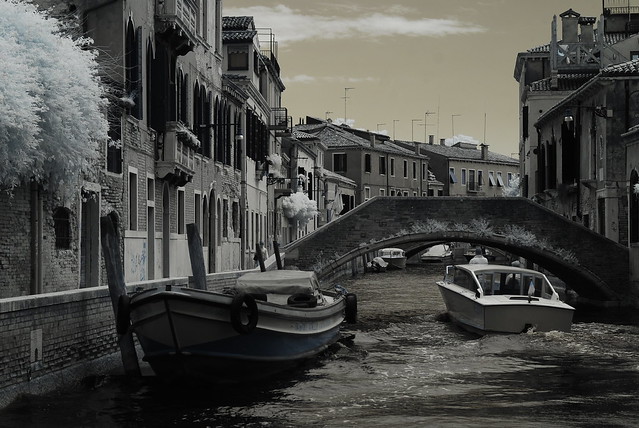 Bridges and boats. Most of the time you’re standing on bridges and taking pictures of other bridges. 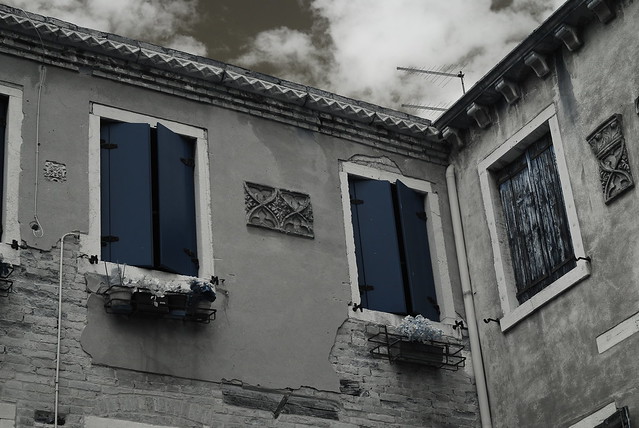 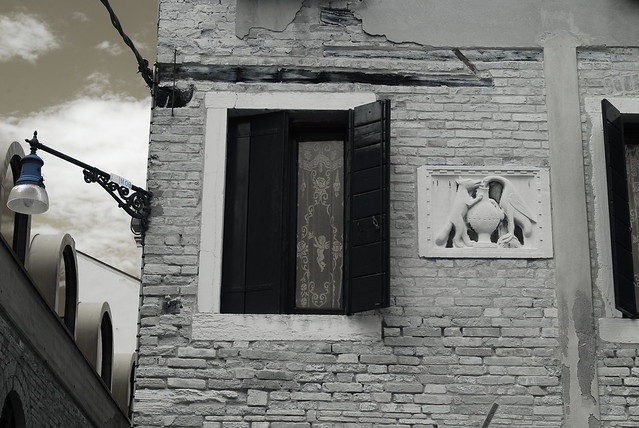 An unexpected appearance of a fable I last heard many years ago. 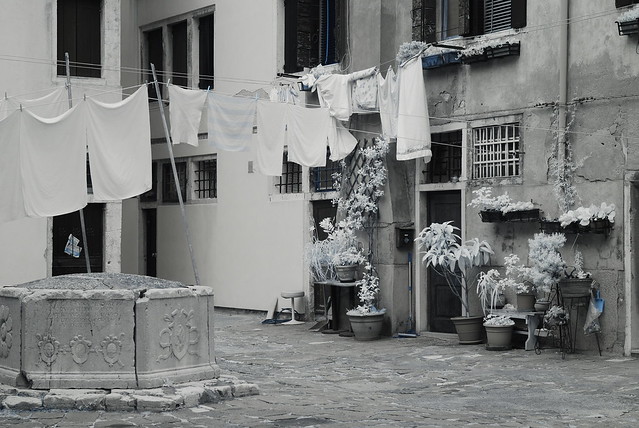 The well, flowers, laundry. Life is slow, life is good. 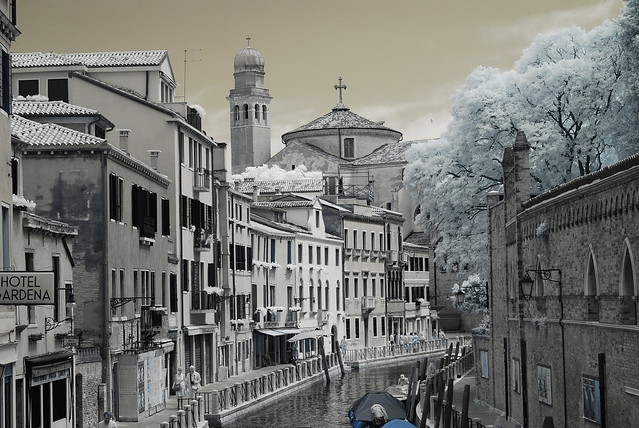 White is the new green. 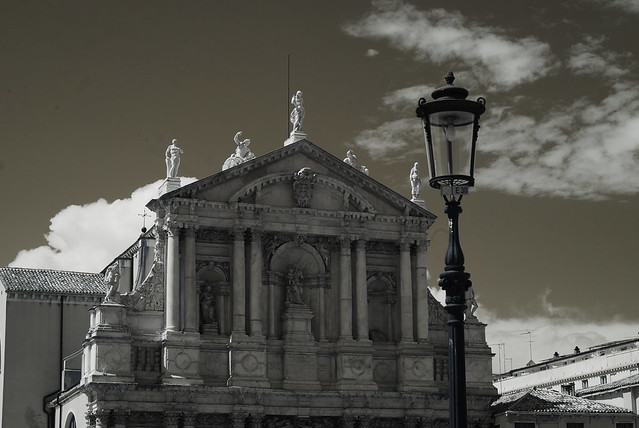 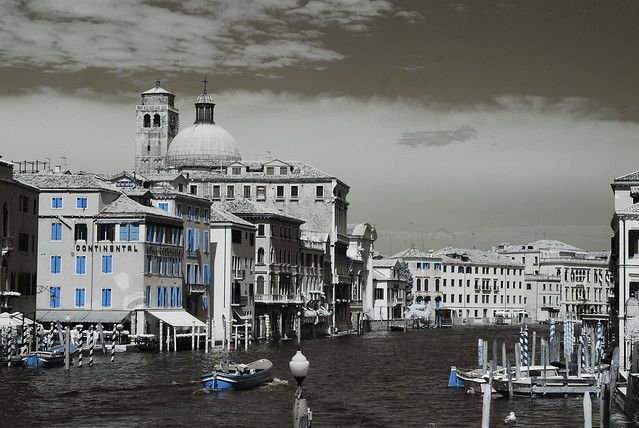 The Grand Canal from the Ferrovia bridge. 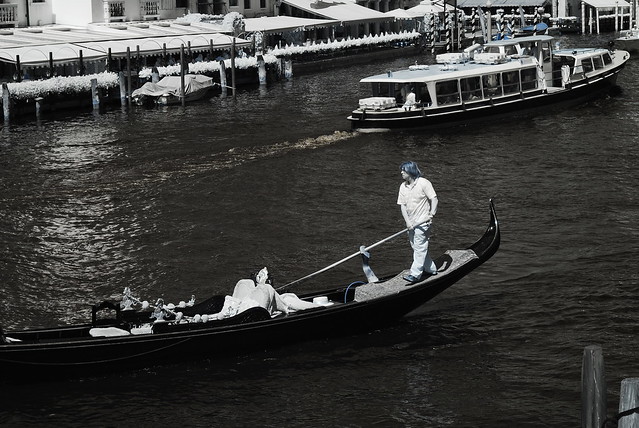 I actually intended to go on a gondola ride. Up until I saw them and their passengers and it just seemed so trite and unoriginal. Our 7-day vaporetto passes got plenty of milage though. 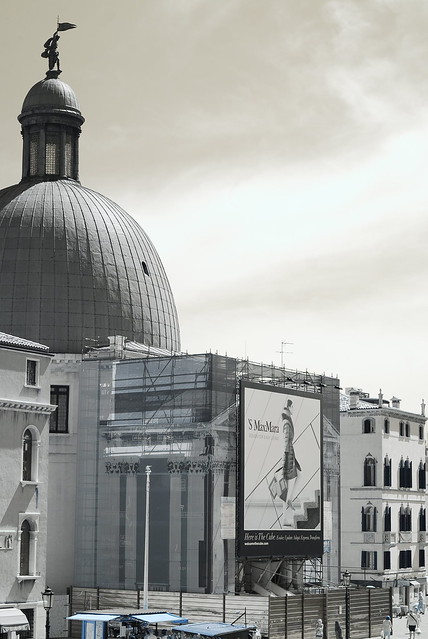 Lots of things are covered up for restoration. This spot is opposite the train station and we passed it so many times, I kind of started to get annoyed at that “cube”. Whatever that is. 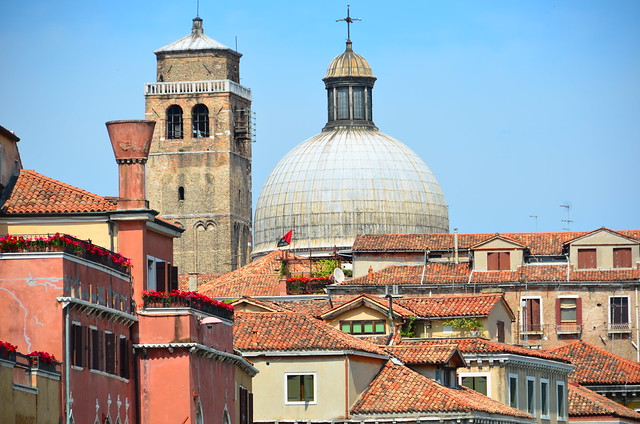 Back in colour! View from the Ferrovia bridge.

Midday is usually the time to take a break, have lunch and possibly go for an afternoon nap. It gets tiring otherwise. Also, those three 1.5L bottles of Pesca flavoured iced tea and some lemon frizzante water are weighing down a little. Guess what we find on our way back to the apartment? Another Billa grocery store, only a 5 minute walk from our place! Venice has its sense of humour, Google’s business listings suck.

When you have breakfast at 11am, your afternoon nap may end close to sunset. Just the right time to go for another round of walking the narrow streets and crossing the endless bridges. The night falls and the city becomes quieter, darker and more serene. 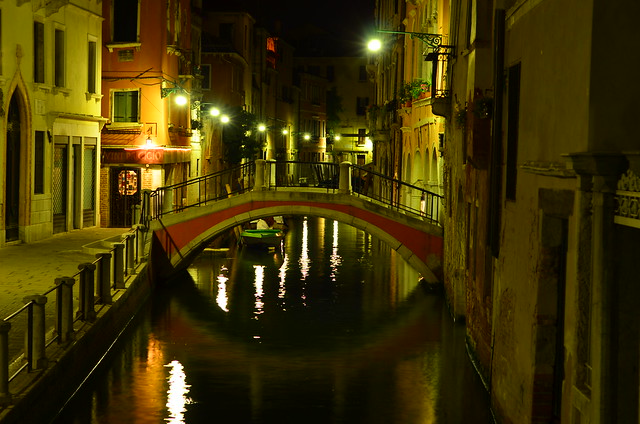 This bridge (the one I’m standing on, not the one in the picture) was crossed by us no fewer than a couple dozen times. On the left is a restaurant which we almost went to at one point – rave reviews and all – but the lack of outside tables was unforgivable. 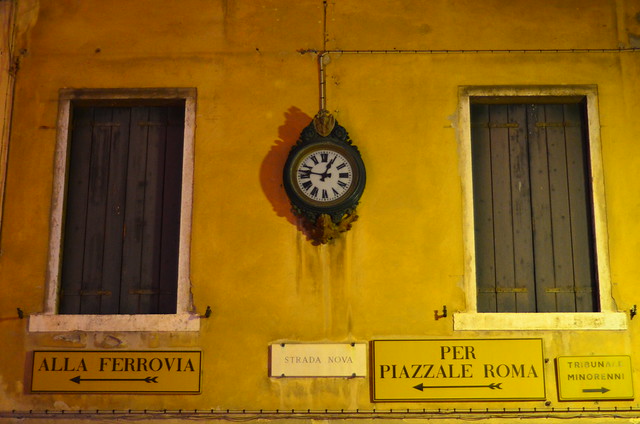 To the left, tourist, to the left. Get on the train and go home. 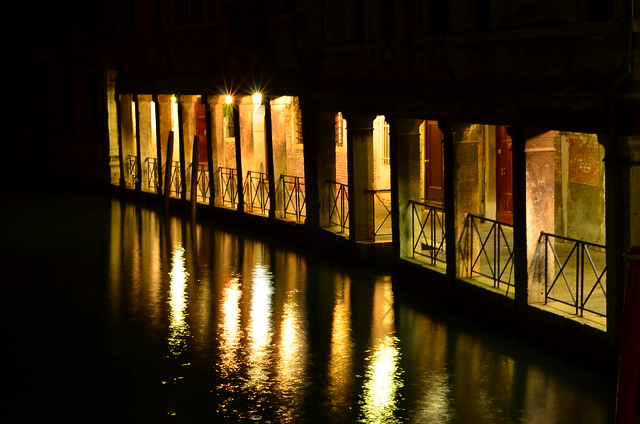 Lots of canals means lots of reflections in the water. On an unrelated note, why is there a Hard Rock Cafe in Venice? 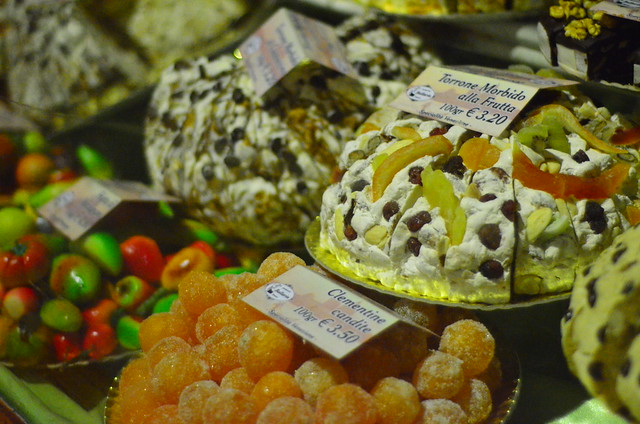 Let’s have some more of the you can look but you can’t touch. A police officer passed by us as we stood in front of this shop. Otherwise they would have to report burglary the next morning. 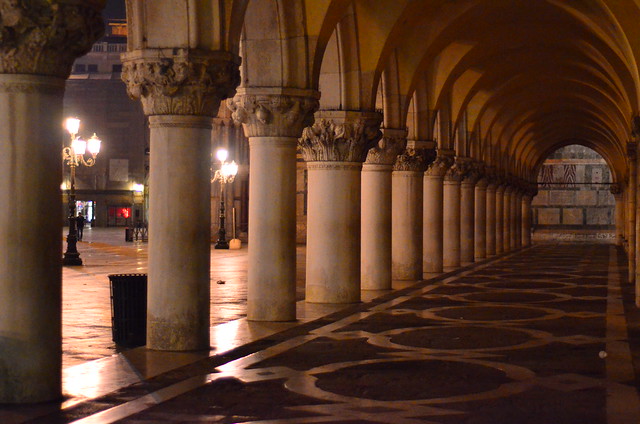 Overlooking the lagoon. I have doubts all these gondolas actually fit on Venice’s small canals at once. 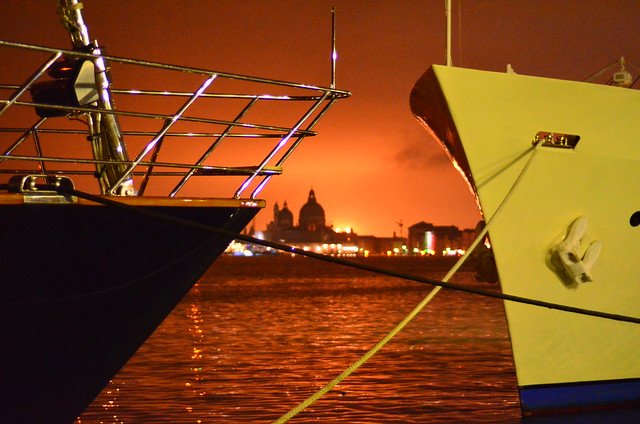 Many of the yachts moored on the southern shores of the city were large and luxurious. What’s better? Living on a yacht or living in Venice? Why not both!

The orange light is not the sun, it’s a fire! I think it’s related to the industrial area west of Venice, but it did leave us wondering if by any chance the city will catch on fire and get burned. That would be most inconvenient, not to mention very hot. 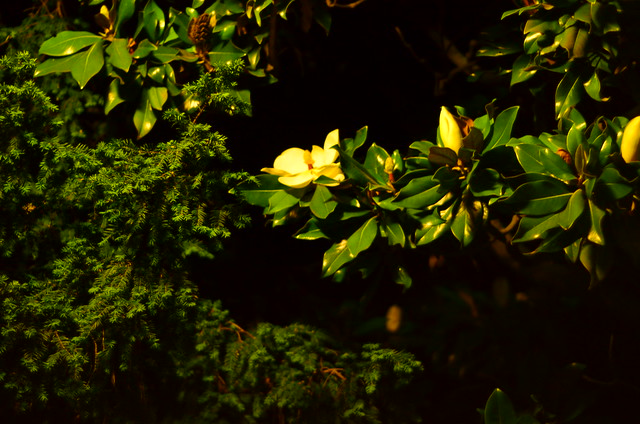 A garden on the south end of Venice. We later saw these blooming trees in every one of the places we visited. Don’t know their name, but like them a lot. 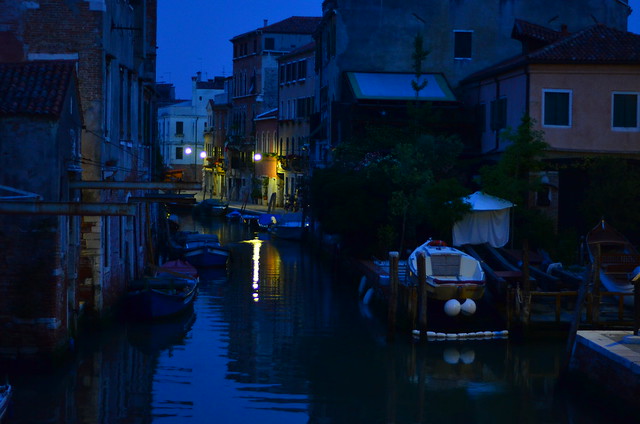 The blue is the light of dawn. We are finally going back for some morning sleep.

I was planning to cover our entire stay in Venice this time, but did not get past one day. What a dangerous adventure it is, to go off into your memories of Venice – will eat your time completely.