Into the blue and into the green

In the context of the nine islands of the Azores archipelago, São Miguel is often referred to as the green one. The reason for this is apparent as soon as you throw one casual look at it – it’s all green – but it becomes even more pronounced when you dwell deeper into the lush rainforest-like interior of Nordeste. 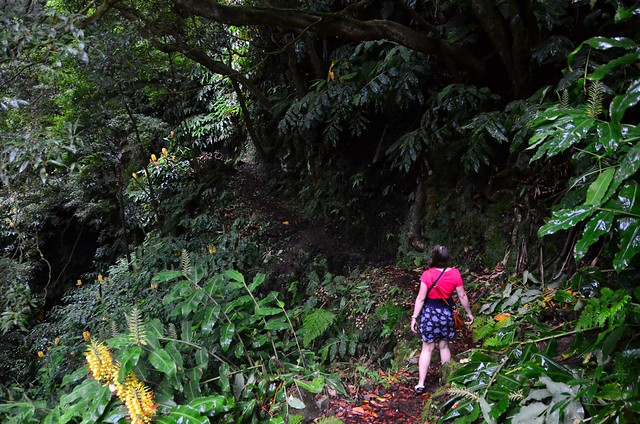 Before getting to the green, we decided to try out the blue. That is, it was time for a dive! Woke up unusually early, and were at the dive shop at 8:30 am sharp. While our initial experience diving in Curaçao consisted of shore dives where you start at a beach, walk in and just follow down the seafloor, in the Azores nothing is so simple, and all dives require at least a short boat ride.

Long story short, apparently, the waves of the open Atlantic ocean are too much for me to handle unassisted, and I got a major case of sea sickness. Even rolling over from the boat into the water did not calm me down enough to proceed with the dive, and I went back on the boat while the rest of the group went under. That was not my smartest decision, as over the next 20 minutes the motion sickness escalated and I had to share the strawberry yogurt I had for breakfast with the fish in our immediate vicinity. Since I had breakfast such a short time prior, it was still undigested, and hey, how many people have vomit that smells like strawberries? On the bright side, neither Alex, nor the dive master had to witness that undignifying event, so it could be worse. Spoiler: there are pills for cases like me, and I got deeper on the next try, but that’s a story for another time.

After Alex resurfaced, we went back to our little house for de-stressing and decompressing, where he admitted that it’s not quite as colourful as in Curaçao. Not much to say for the rest of the day, aside from a trip to the grocery store, that resulted in us getting some local fresh cheese (yum) and Portuguese wine from the mainland (meh). 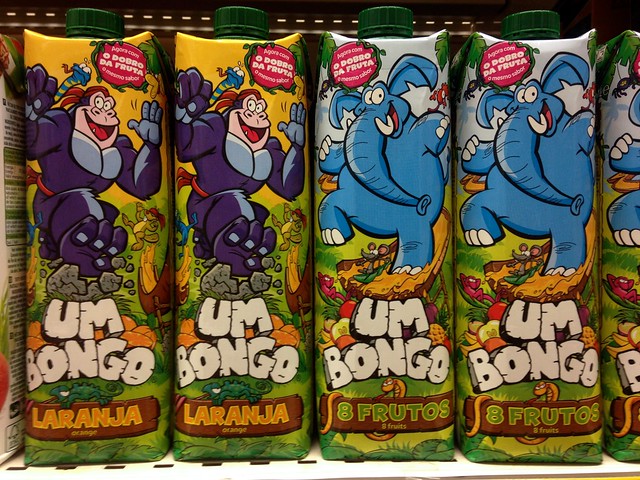 As a seasoned (i.e. salted and peppered) Azorean traveller, I have to say that few things are as quintessentially São Miguelian as a trip to Nordeste along the north coast of the island. Nordeste is the name of both the region and the main town of that region. (Don’t forget to sh your way through that name. Nordeshte!) A tentative destination was set at Ribeira dos Caldeirões, a national park known for its waterfalls. Disregard the expressway and take the winding road that hugs the coastline along the cliffs and valleys, taking you to the tiny quiet villages of Porto Formoso, Maia, Salga, Achadinha and everything in between. 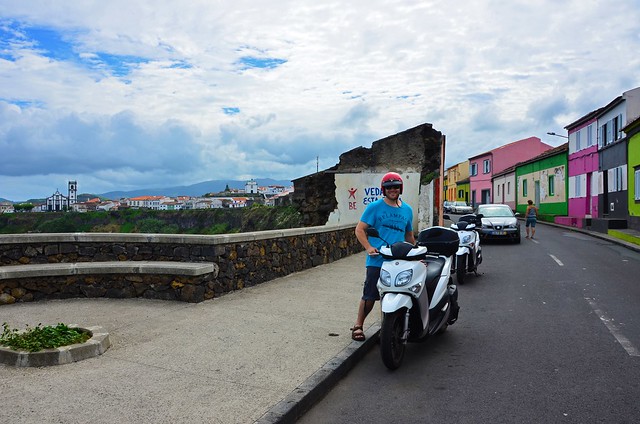 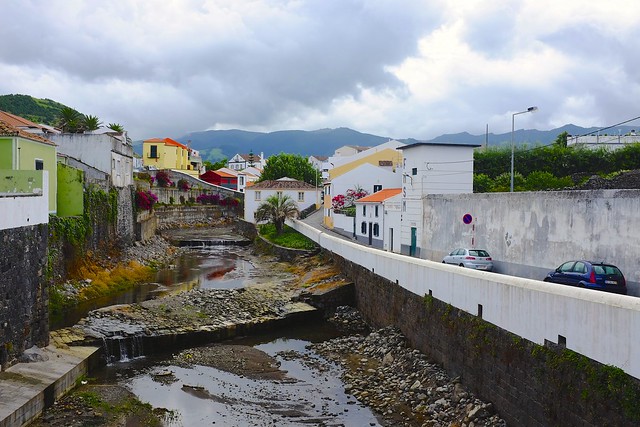 The actual river Grande in Ribeira Grande. It will flow with more energy in the winter, when the rainy season begins. 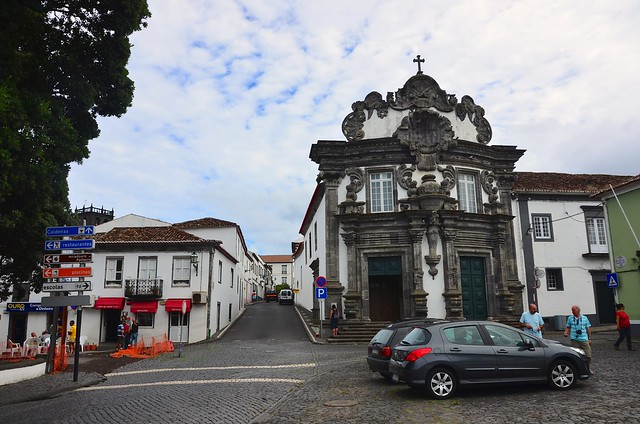 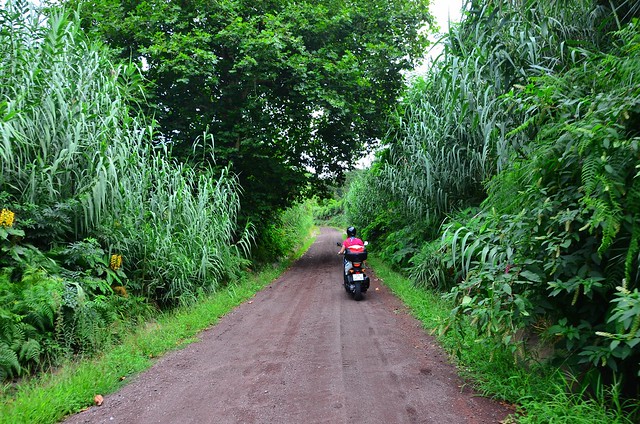 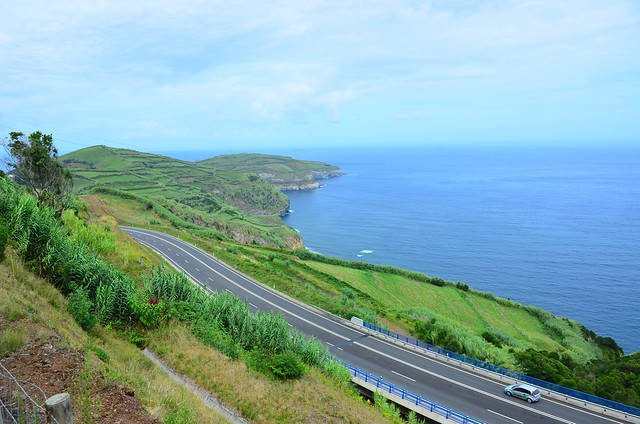 Overlooking the expressway on São Miguel. 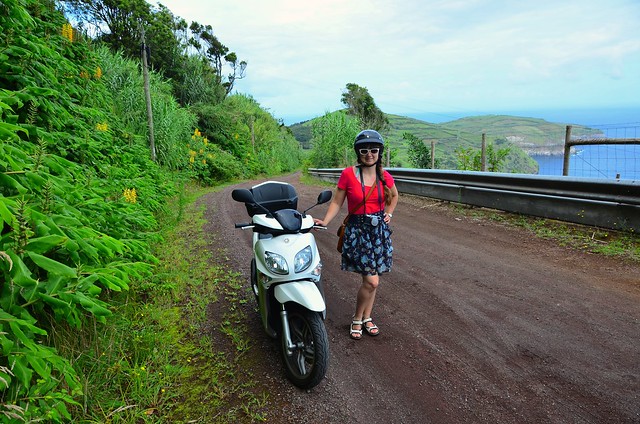 Dirt road with a view. 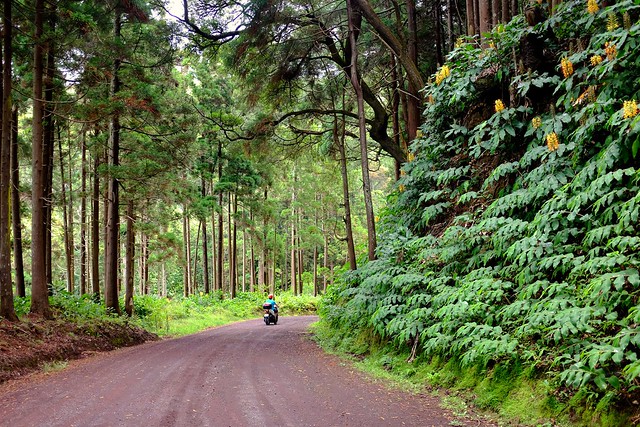 A gorgeous green road through a forest.

Almost all of these villages have beaches, and we could not resist the first one we encountered, Moinhos in Porto Formoso. Still too many waves and low visibility for snorkelling, but it was a great spot either way. 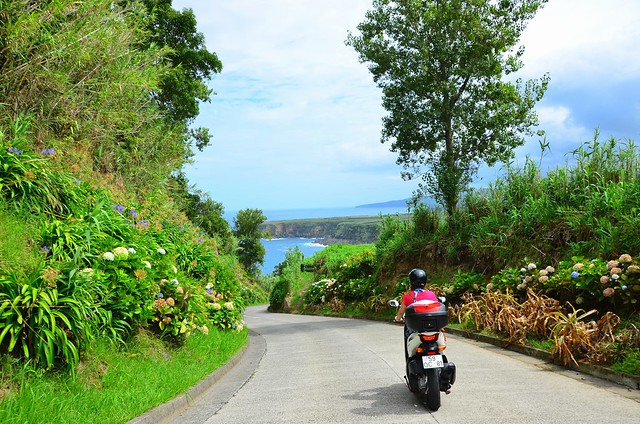 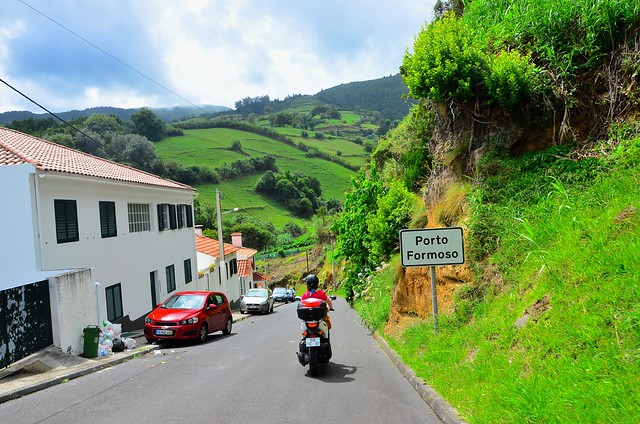 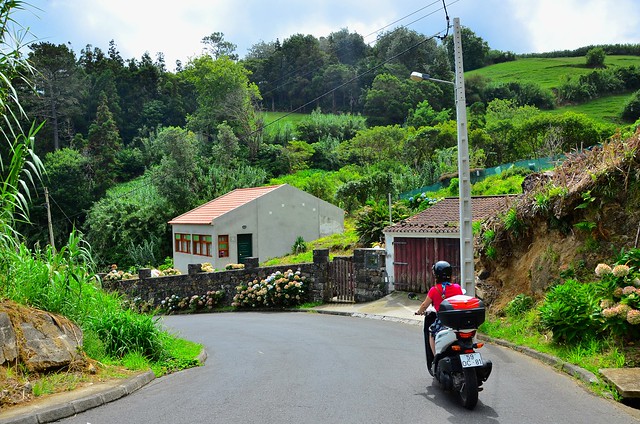 Porto Formoso, but could be any one of the dozens of São Miguel villages. 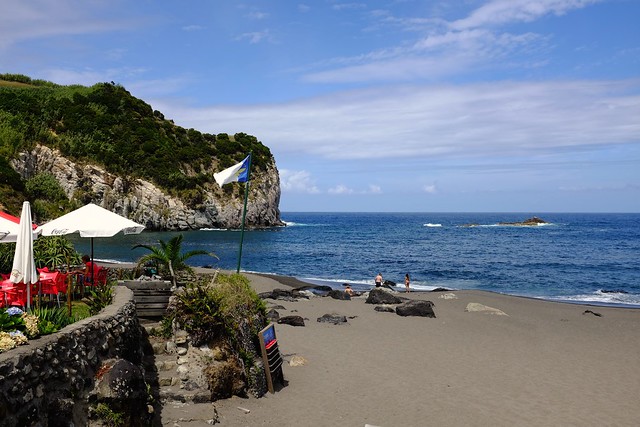 While the actual distance to the national park we were aiming for is not that long, with the road going up and down along the steep cliffs it takes hours to get anywhere. For every little village, the road gets down to sea level, temping you with another beach, then it creeps a few hundred meters up. There it offers up a majestic view of the village you just passed and the rugged shoreline around it, only to throw another set of downward hairpin turns at you. You struggle to concentrate on the road because the landscape opens up glimpses of the next beautiful village and you just wonder why you’ve never read about this part in the guidebooks. 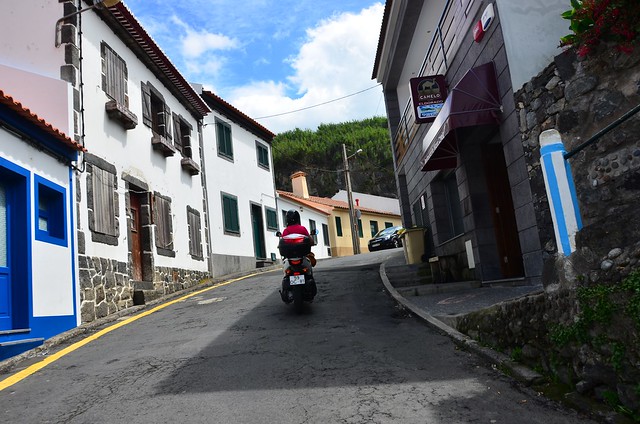 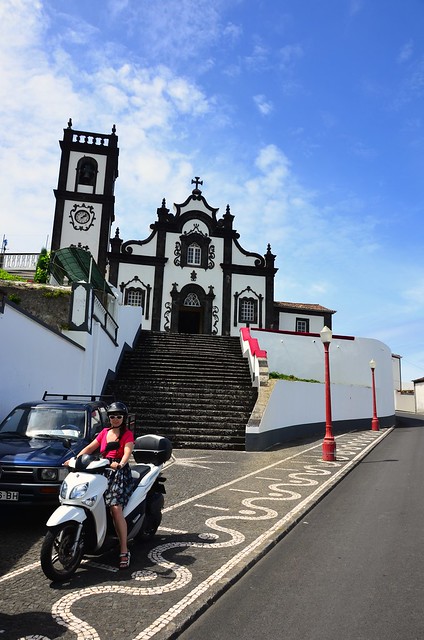 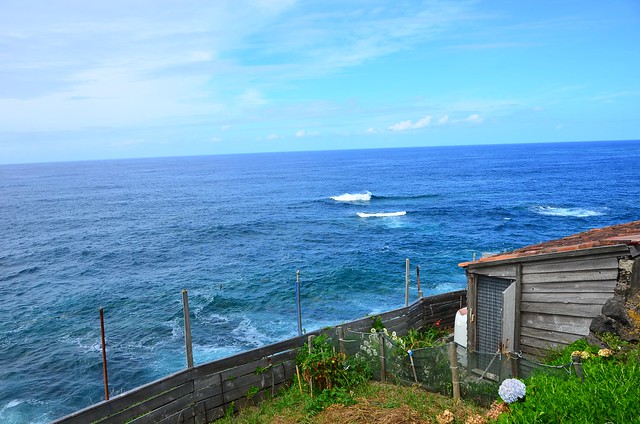 A garden with an ocean view! 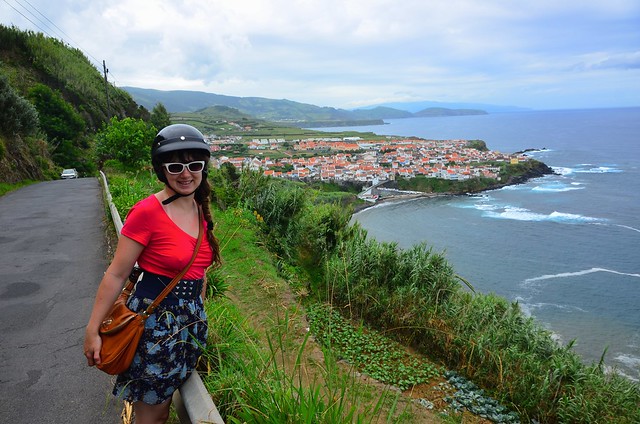 Overlooking the village of Maia.

All of this can get very tiring, and soon enough you find yourself in a small restaurant in Lomba da Maia, with catch of the day on your plate, surrounded by a variety of vegetables, learning more Portuguese words as you go along. Maracujá – passion fruit – frequently found in juice or jam form.

While taking pictures outside, we chatted with a fellow who was taking a break from all the eating going on in the restaurant. It was a family reunion and some people were on a mission to see just how stuffed they can get him. The man was originally from the island, but now lives in the United States. It would be a frequent theme with English speaking people we met here – many are visiting family in the Azores but live in the United States or Canada. There are many Canadian or American flags flying from houses here, and a beachside café in Porto Formoso was proudly flying several Quebec ones. It’s quite unusual, it seems, to come here with no family connections. 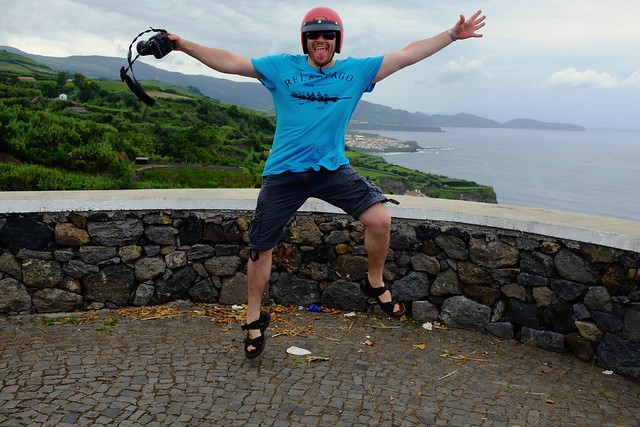 One of the many scenic lookouts on the way. 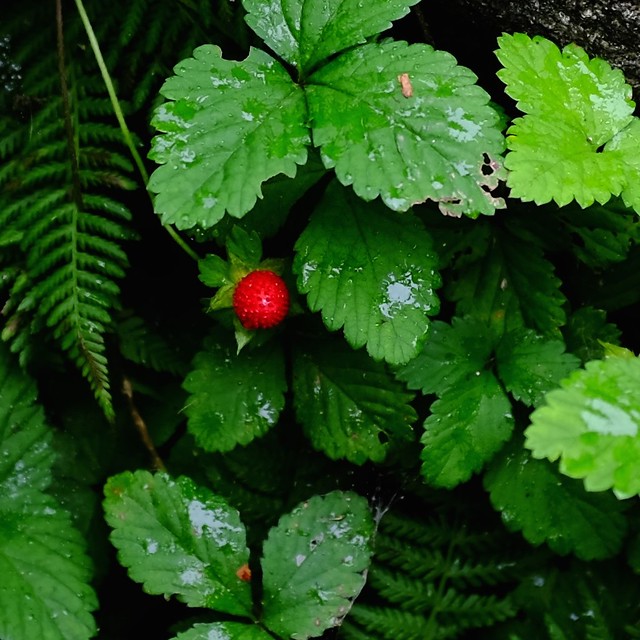 An odd berry that was found in large quantities all around. Looks like a strawberry, tastes like grass. 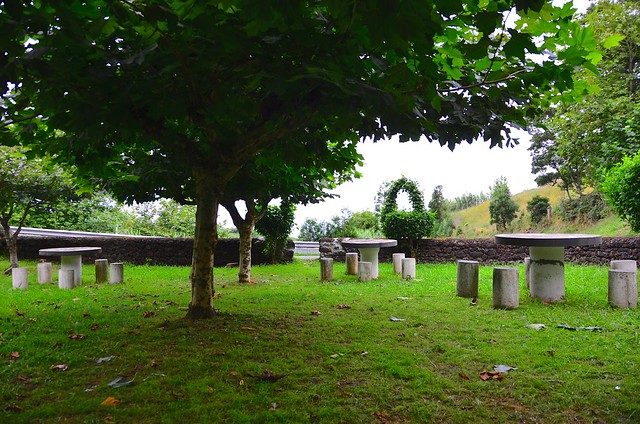 A picnic area by the road, where we stopped to wait out a bit of rain. 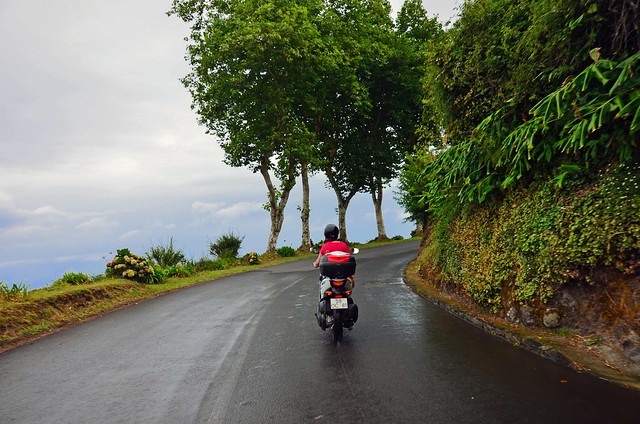 Riding right after the rain? Sheer pleasure on São Miguel!

Hard as it was, we did eventually reach Ribeira dos Caldeirões. As long as you stay off the expressway but follow it roughly from the secondary road, you cannot miss the majestic waterfall welcoming you to this spot. 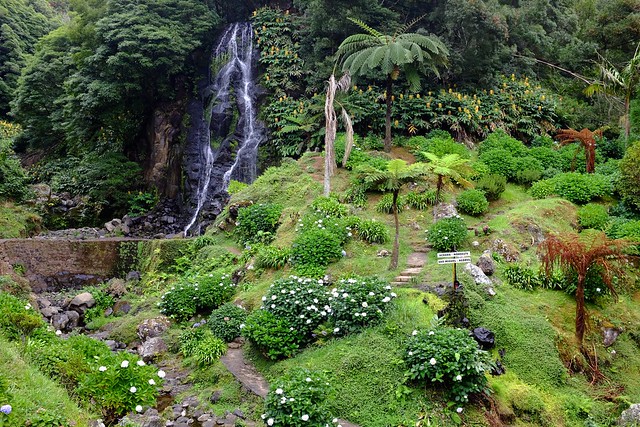 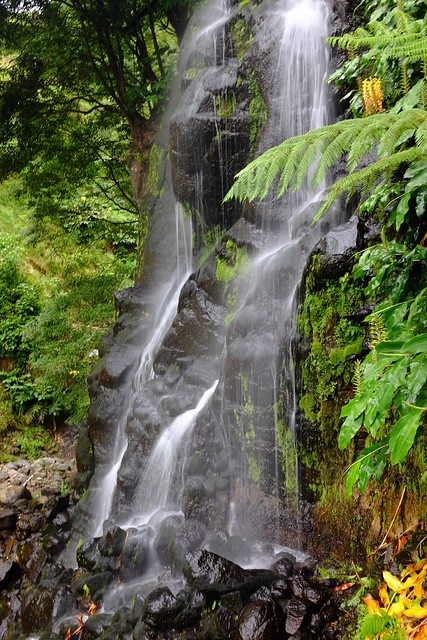 Waterfall up close and personal.

Another spoiler for today: this main waterfall is not real. The river that feeds it creates several cascading waterfalls along the way, but this particular stage was created artificially by redirecting the water over this particular cliff with the help of good old-fashioned PVC piping. A short hike proves it, but a longer one takes you through the gorgeous greenery the likes of which are not often found outside of a rainforest. 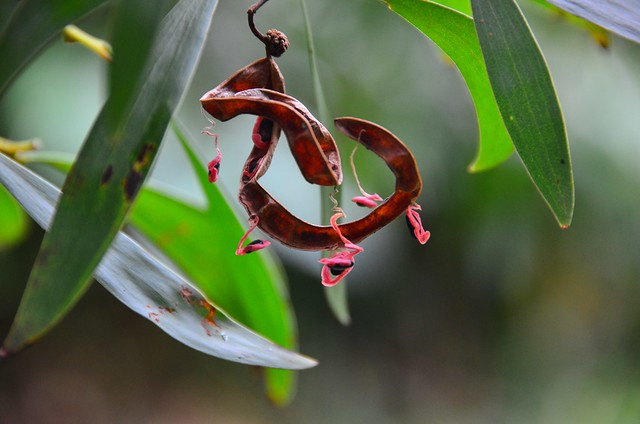 Is it a tropical plant or a miniature dragon? 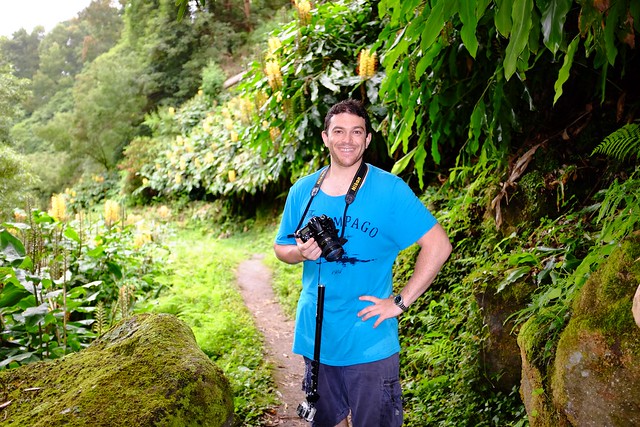 Hiking trail through the park. 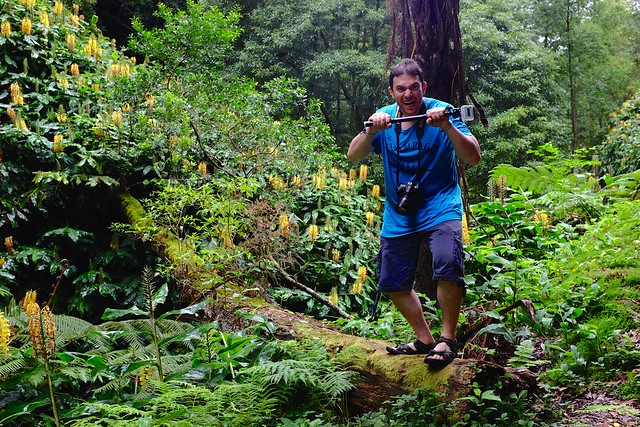 A very tempting bridge over the river (not shown, it’s about 5-10 meters below). 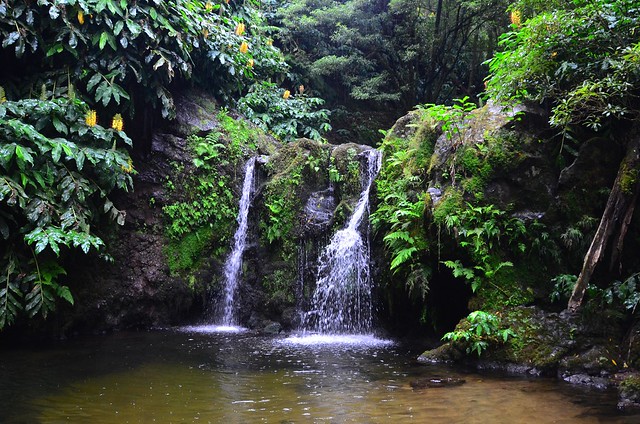 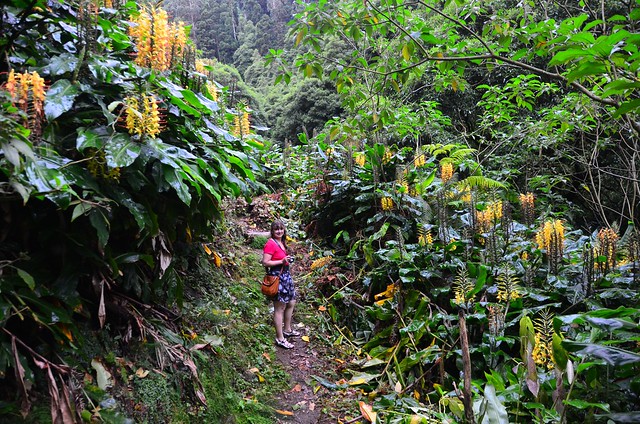 The abundance of vegetation makes you feel tiny! 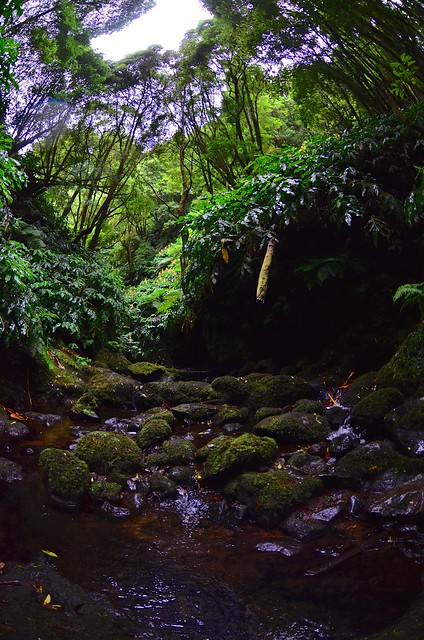 The gentle river becomes your trail. At this point it was getting close to 7 pm and we decided to head back. 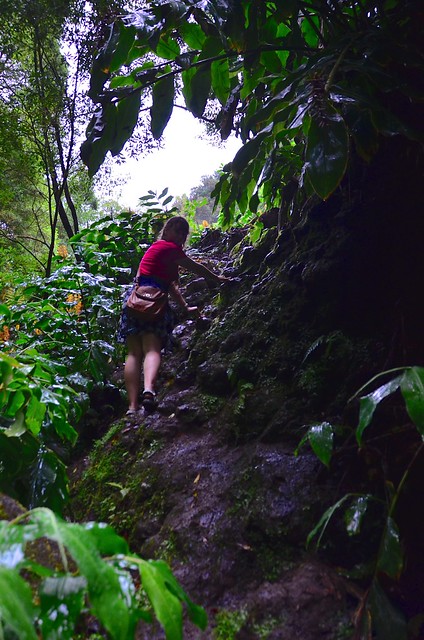 We followed the trail along the river for a couple of hours, at which point we decided that the combination of the setting sun and strengthening rain meant we should head home. It’s always fun to go 90 km/h on the expressway wearing only a T-shirt and a short skirt while getting pelted by rain! We took a couple wrong turns at the end, but made it back just in time for dinner (it’s always perfect time for dinner when you’re the one cooking). The rain was pouring harder and harder outside, but inside it was cozy, and with good cheese.