To the East Coast: Getting to Alma

It has been in the works for a while: a trip to the eastern provinces on our motorcycle. It was the first time we went on a multi-day trip with a bike and the idea of living for over a week out of a single 55L box was mildly challenging. Pro-tip: it’s easier if you prepare yourself by ditching checked luggage whenever you fly, no matter for how long. Not entirely sure what to expect, we set up an itinerary to visit Bay of Fundy in New Brunswick, Cape Breton (specifically Cabot Trail) in Nova Scotia, followed by Percé and Kamouraska in Québec. 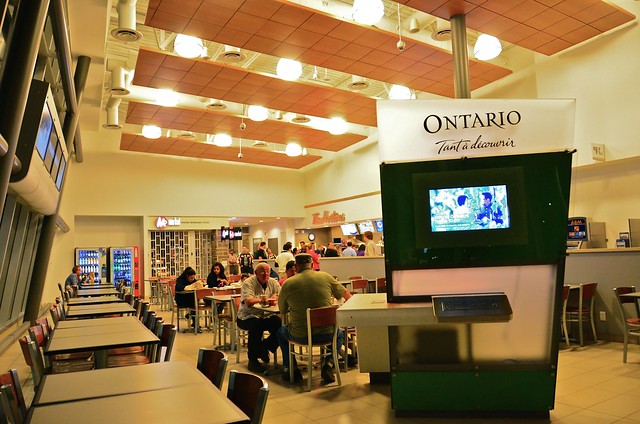 Rest stop along 401 – coffee and muffins served around the clock

We planned to leave on a Friday evening from Toronto and get to Montreal before calling it a night. We left a bit later than anticipated and it was already past the PM rush hour. It was Hwy 401 all the way, as the darkness would make us unable to appreciate scenic routes anyway. Outside of the GTA the highway was rarely lit, and it was a fairly boring ride. After about 200km we stopped at a roadside service station to gas up and have a bite. It was one of the newly built Onroute rest stops that had a large food court with a 24/7 Tim Hortons. Aside from a warm drink and some muffins, we took advantage of the paper towels there to thoroughly wipe the millions of bugs splattered across our helmets. The layer of them on the visor was beginning to impair vision, and as it turns out, wiping the helmets would become a routine action during every fuel stop for the duration of the trip. The windscreen kept the wind pressure off the chest, but the helmet was still bombarded by insects of all kinds.

After getting back on the road, we soon came upon a major bridge construction which slowed the entire highway to a halt and added perhaps a good 20 min to our trip. Finally in Montréal we made a few wrong turns at various highway junctions (they had lots of construction going on which made the GPS directions  useless), but eventually found our hotel and set to sleep in anticipation of an early start the following day.

One thing notably absent from Southern Ontario landscapes is anything of altitude. Something as short as 200 m can pass for a “mountain”. The Laurentian Massif, while not as prominent as the Rocky Mountains, is still a pleasure to gaze upon. Following the road on the southern shore of St. Lawrence River, you begin to see the modest mountain ranges just beyond the water, and there is something inspiring about it, coming from the flatland of Ontario shores. 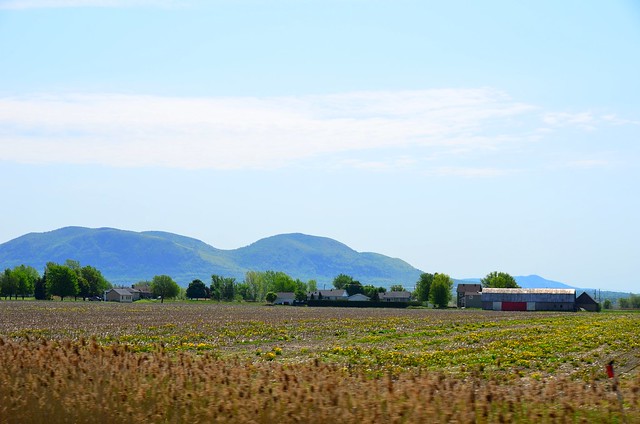 Views from the road. Taking photos at 100 km/h is not always easy… 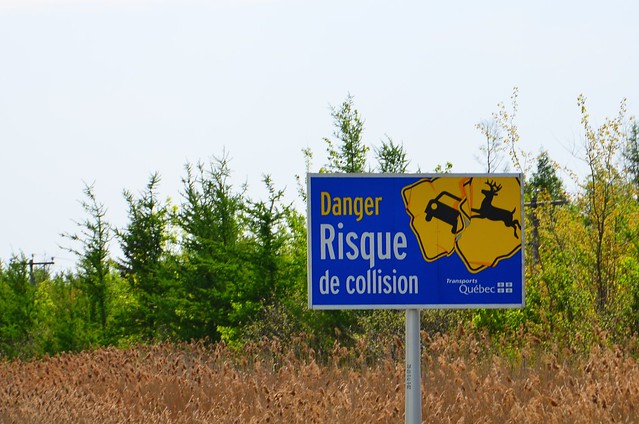 There is an incredible amount of creativity and personalization that goes into “Moose/Deer/Turtle/Elephant Danger” type signs from various localities. 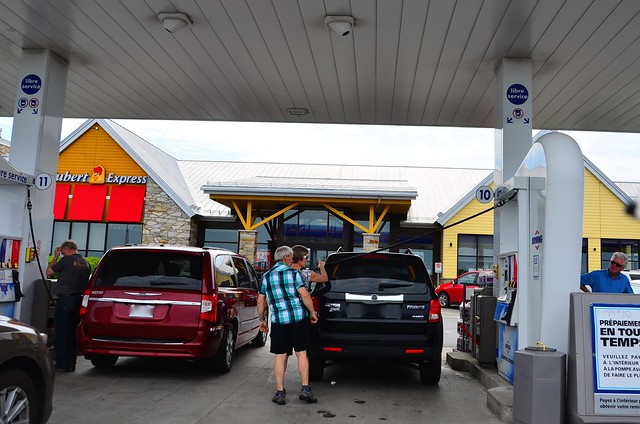 There was a long line up to fuel up at a roadside gas station and when it was these two’s turn… After a bit of confusion they did what they could. 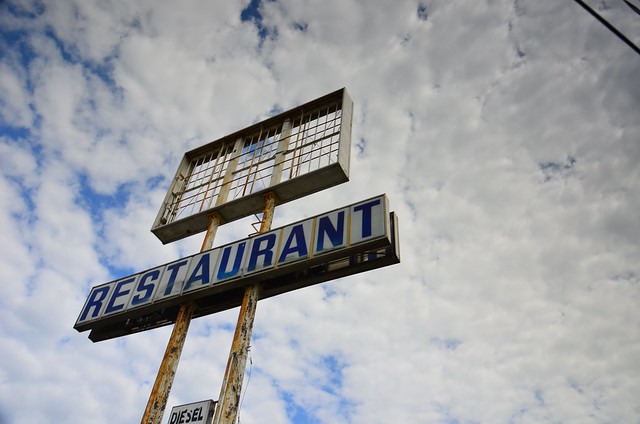 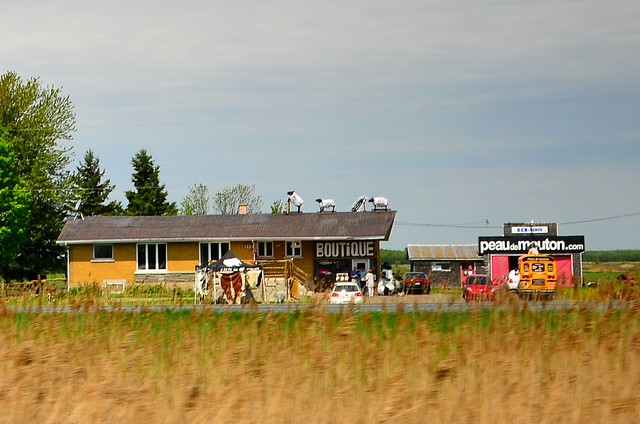 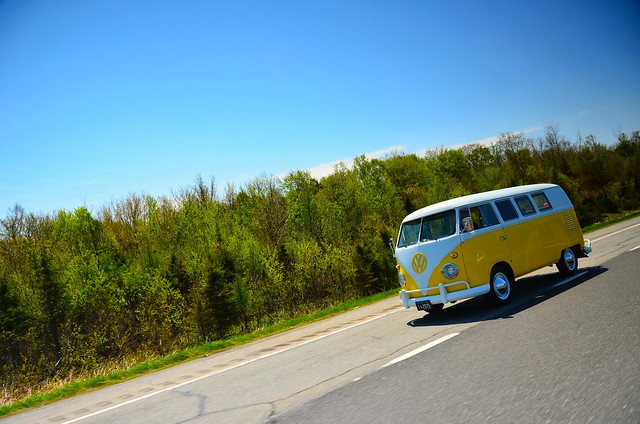 This isn’t the last time we spotted this VW bus. 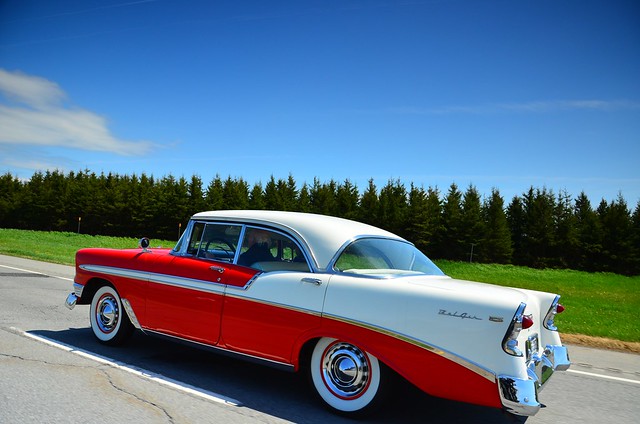 We stopped for lunch in a picturesque village of Kamouraska, where a riverside café offered menus only in French, and it seemed nobody in the entire place spoke English. Thankfully, there is always the option of online translation, and after an excruciatingly long time studying the menu, we made our choices and were soon taking in both the lovely outside atmosphere and the tasty meal. 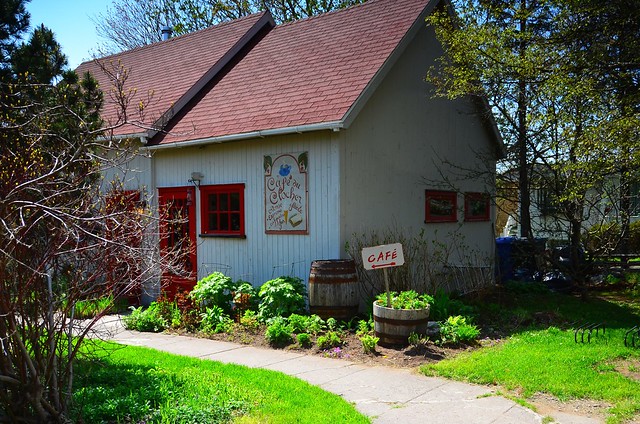 We pulled our lunch stop for as long as we could, as it was such a ridiculously perfect spot, but eventually had to head out and get to New Brunswick. We estimated that it’s best if we continue without further stops, and hit the freeway. It was boring and tedious, but on the bright side, the speed limits are a slightly more reasonable 110 km/h. 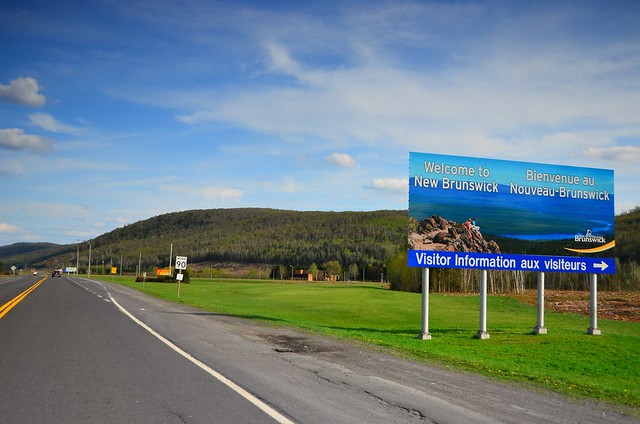 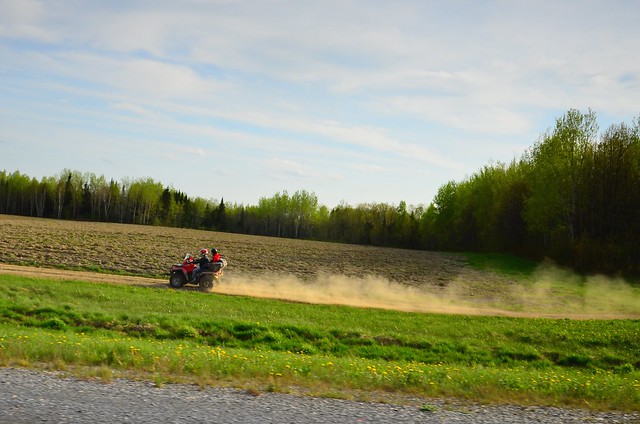 More than one way to get around New Brunswick 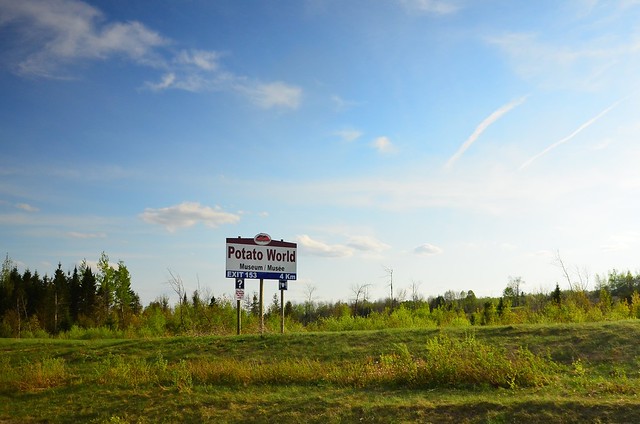 Such a pity, we had to skip it. 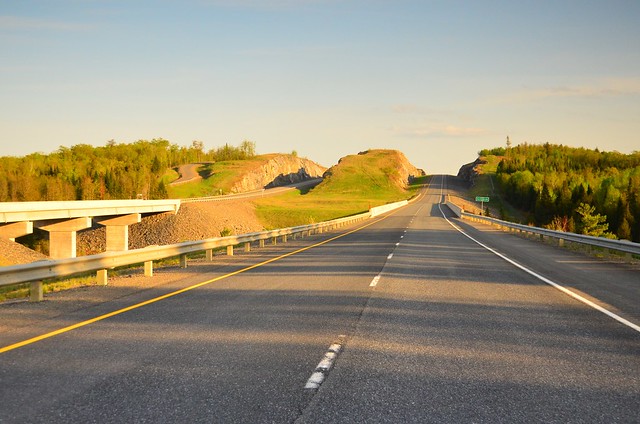 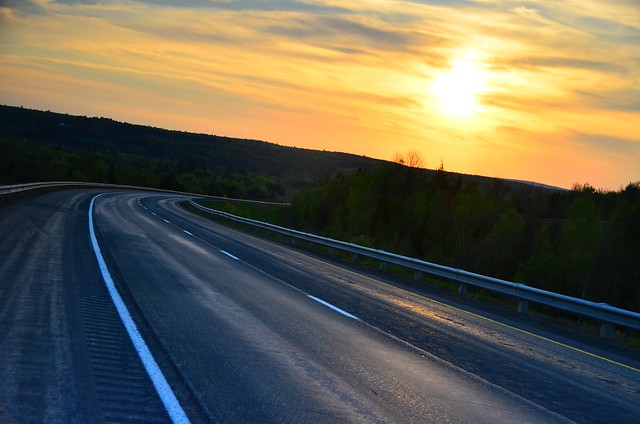 The sun set way before we approached the freeway exit, after which we still had solid 40 minutes to go in near darkness through smaller country roads. But before that could be done, we needed to get some fuel. It must have been a case of divine intervention, because the one gas station we found was about to close in 5 minutes. It was five minutes to 8 pm in the Middle-of-nowhere, NB. Even if other gas stations existed, they would have been either closed by the time we reached them, or simply outside of our remaining range.

As we kept moving south, the proximity to the fertile waters of the bay could be felt through the dramatically increasing number of bugs hitting the helmet visors. They come in all colours of the rainbow, a good variety of sizes, and after achieving a critical mass make seeing anything through that visor impossible. Since we recently passed the last viable gas station, there was nowhere along the way to stop and clean that mess off. Since I sat in the passenger seat, my visor had fewer of those bugs. It was nowhere near clean, but it was still worth it to swap our visors so that Alex could at least have a fighting chance 😉

The last stretch before Alma goes through a national park, which is not terribly good news because there are no lights, not much passing traffic, and plenty of animals looking to make your day by jumping out and offering to wipe your windshield. The shift from orange glow of the sunset to the pitch black secrecy of the night came abruptly and felt very treacherous. For the first time ever, the headlight of our motorcycle was the only light source in our part of the observable universe, and as it turned out, it wasn’t set correctly either. Instead of shining at the ground ahead, it was lighting up the tops of the trees 🙁 .

The place we stayed at was on the far end of the town (which is not quite as bad as being on the far end of something the size of Toronto), and thankfully, our hosts were still up, lights on and expecting us. We climbed up a twisty gravel road to reach our designated cabin, and could finally cozy up with a cup of hot tea.