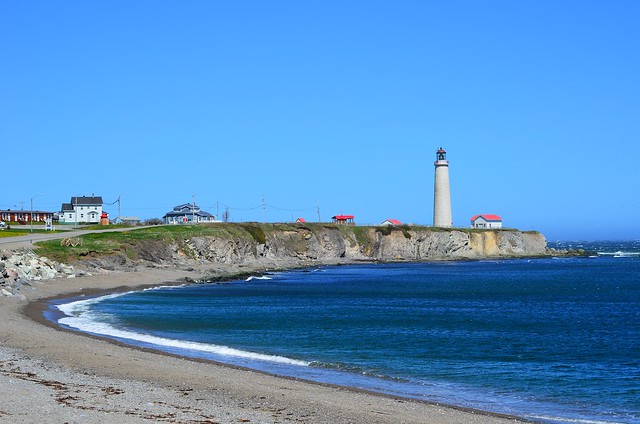 From here on we were on the road the entire time, and thankfully, it was a great road. Route 132 stretches along the entire length of the St. Lawrence river and gulf in Québec: from its border with New Brunswick in the east, to New York in the west. Where the road hugs the shores of the Gaspé Peninsula, the waters of the wide open gulf are indistinguishable from an ocean. 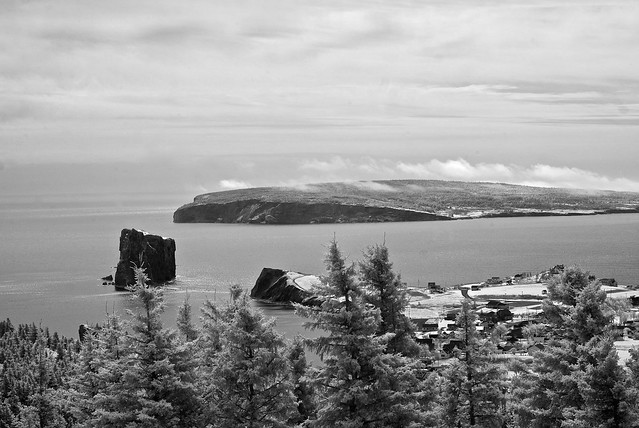 As the morning mist was rising over the Bonaventure island, we took off and left the beautiful Percé behind. Shot in infrared.

The seemingly endless array of sea side villages continued, and after passing through the densely forested section of the road in Forillon National Park, we reached what is likely the best part of route 132. The road runs along the bottom of an escarpment, with the water just a couple of meters away. The strong winds almost let the waves touch whatever happens to be passing by the road. After a while I start noticing the salt accumulating on my clothes and the camera. On the other side, a steep wall of the escarpment sets a solid boundary crossed only by the streams that rush from the Chic-Choc mountains towards the gulf. Whenever they reach the edge, a waterfall forms. It’s the kind of road you can imagine going by for hours without getting bored of it. 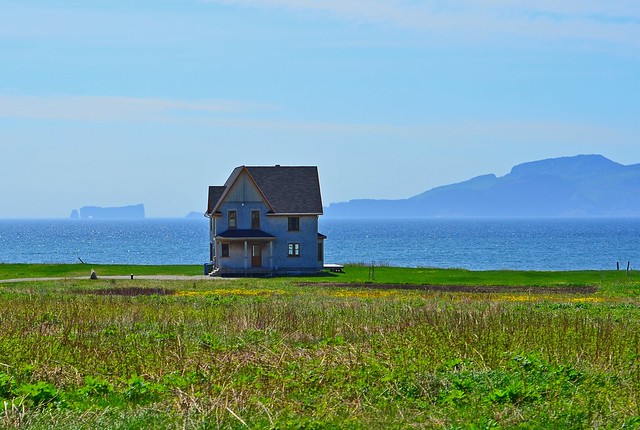 Percé rock hiding in the haze, seen from the northern tip of the Gaspesie. 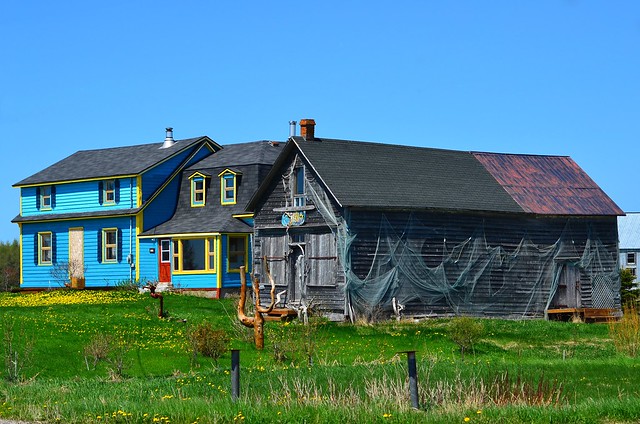 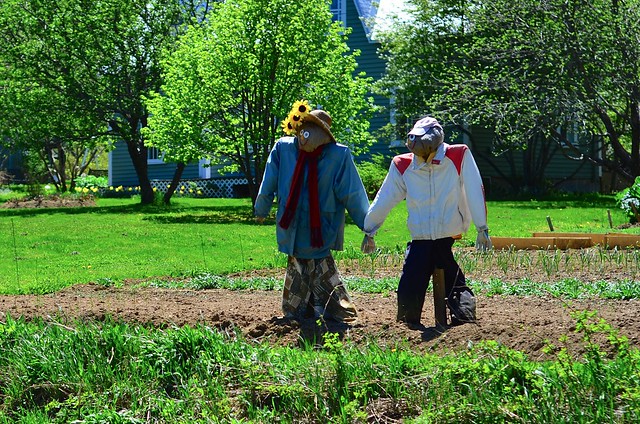 Scarecrows that are not very scary. 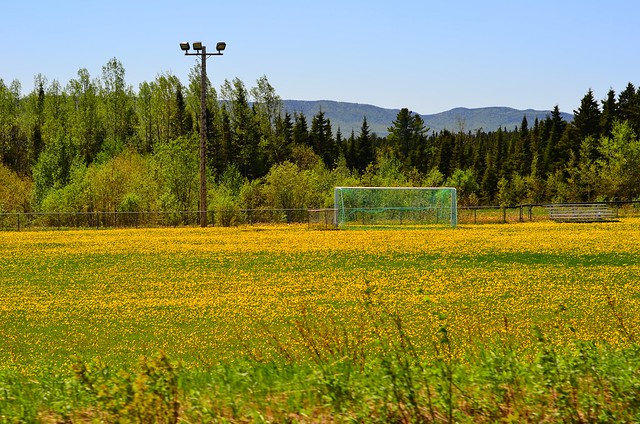 Dandelion covered soccer field. Must smell awesome to play there 😉 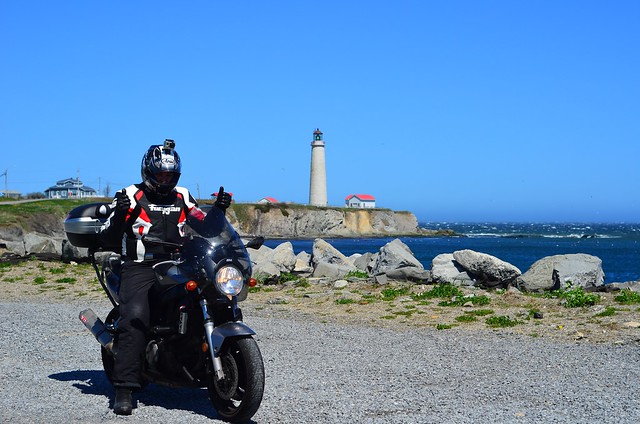 While I don’t have photos of every one of the numerous lighthouses, in many spots they are almost as prominent as churches, especially on cliff tops like this one. 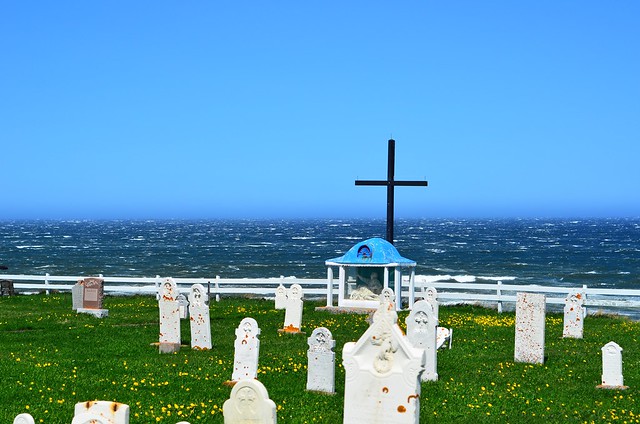 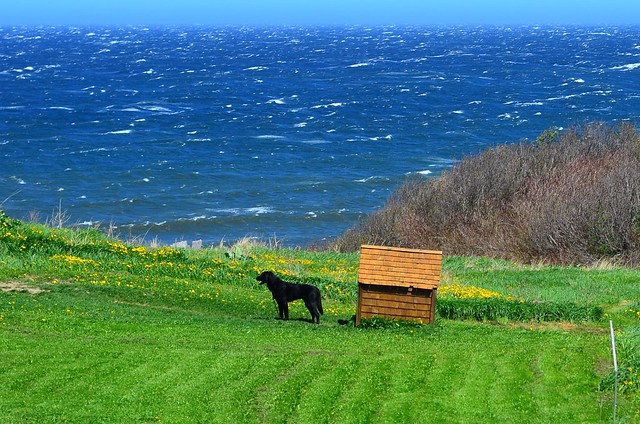 This puppy has a great opportunity to meditate while listening to the waves breaking. 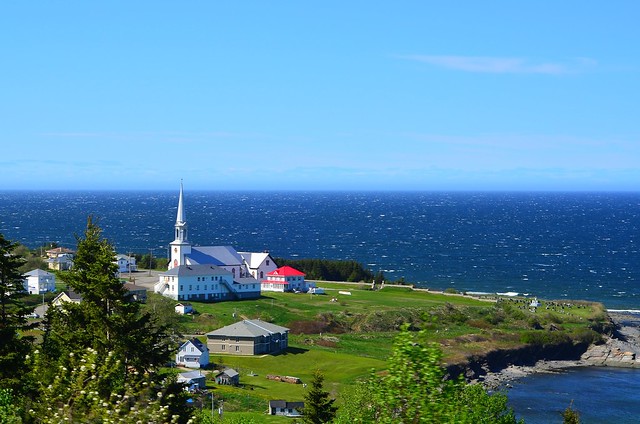 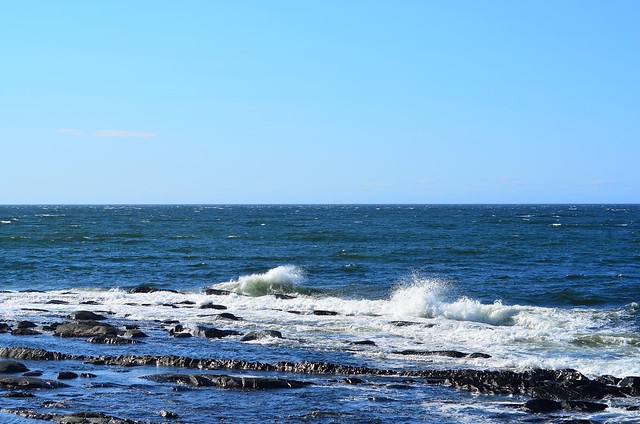 While sometimes the gulf is peaceful, today is was ferocious! 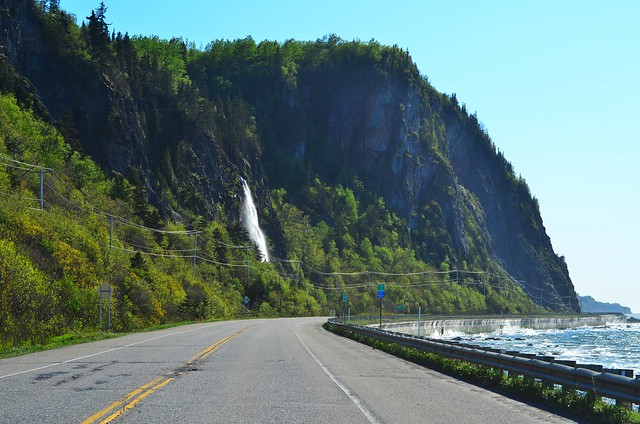 The land of cliffs, waterfalls and waves. 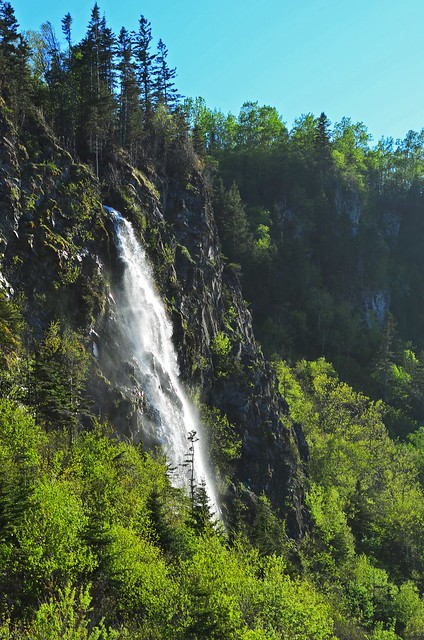 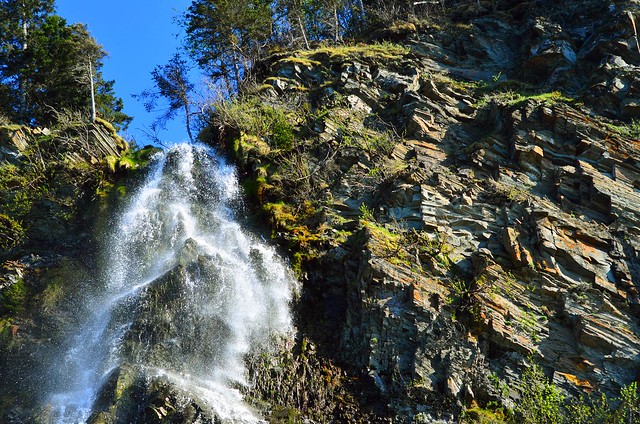 Waterfall: an up skirt shot. 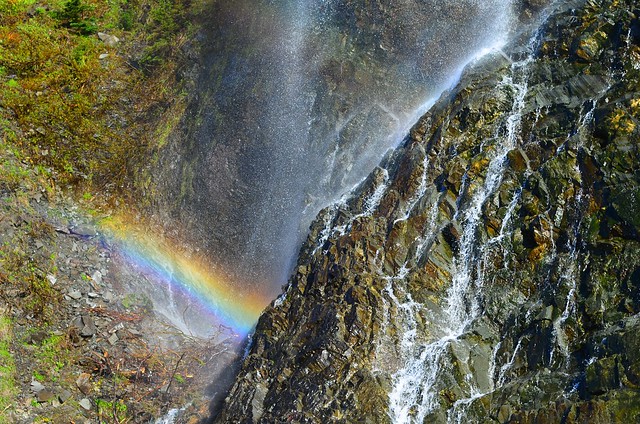 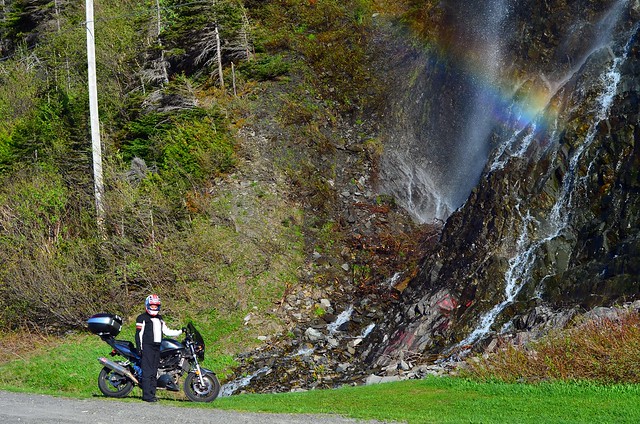 Riding for hours is what we did, stopping only for food (poutine with prawns), gas (unleaded, regular) and to admire the views. It was another long day, and it was about to finish way before we reached our destination for the night – a small village of Kamouraska. In addition to that, we were starving, and as we got to a larger city, Rivière-du-Loup, we had to stop and have dinner. This town of 20,000 is about 40 minutes away from Kamouraska, and as silence and darkness was falling on the countryside around, the town was teaming with life. We skipped the night clubs, and found a quiet Italian restaurant instead. 🙂 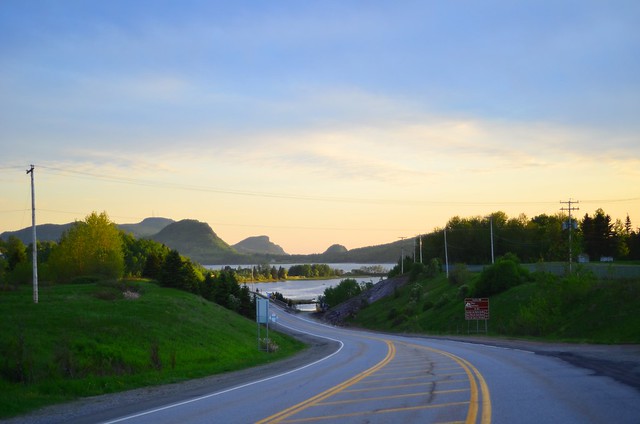 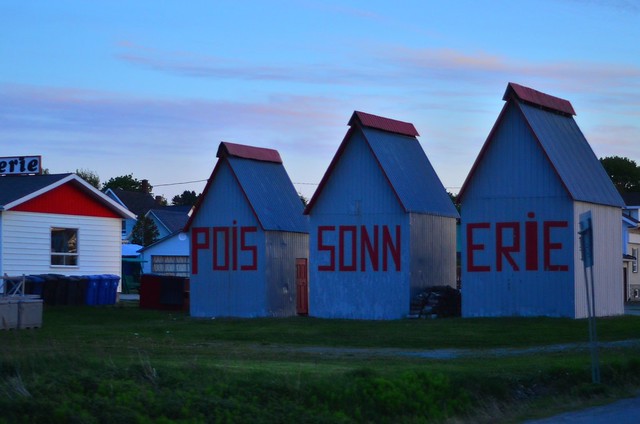 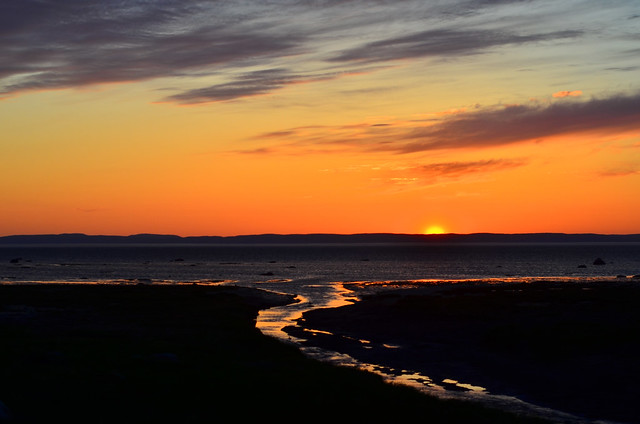 Sun setting over Laurentian mountains far on the opposite side of the gulf.

By the time we were on the road again, for that last 40 minute stretch, it was pitch black outside of the town. The road leading to Kamouraska had no lights (naturally), the traffic was rather mild. We let one car pass us and then used it as a scout with bigger headlights, but it was only travelling in the same direction for a few minutes before turning into a driveway on the outskirts of the village. Riding a motorcycle in the dark is not my favourite activity, but at one point the trees and houses cleared off and we got an unobstructed view of the St. Lawrence gulf, with the light of a full moon reflecting in the water in the most magical way.

Our bed & breakfast hostess was forewarned that we’d be coming late and was waiting for us while the rest of Kamouraska was seemingly fast asleep. As beautiful as the night was, we didn’t really spend much time appreciating it. We barely had the strength to climb up to our room on the second floor and get into the comfy bed.

The last morning of the trip we woke up to a freshly made gourmet breakfast, served in a room overlooking the gulf. It’s a real pity we were only here for one night. The tourist info booklets spread on the table were tempting us with the things to eat in the region (seafood, cheeses, fresh sausages…), but we had no time to explore it. 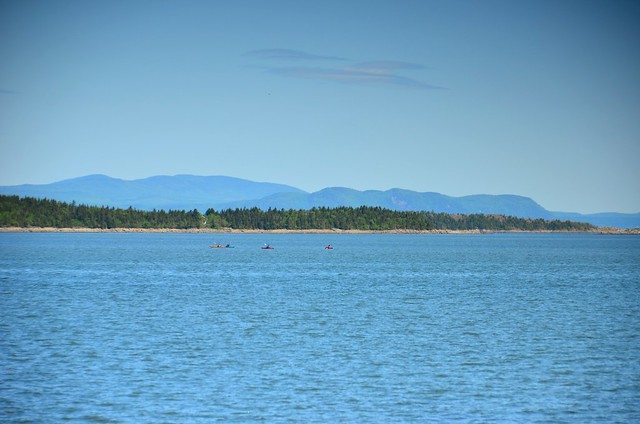 Kayaking near Kamouraska. The island seen in the middle is a bird sanctuary. 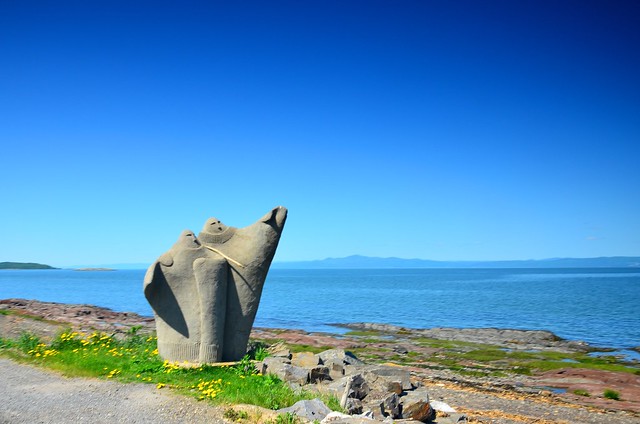 As we left Kamouraska, we continued on by the waterfront along 132, watching the small villages pass us by, interspersed by the occasional farm fields. The highway turned a little inland around Québec City, at which point we decided to skip to the freeways for a more direct route home. But before that, we spotted the same yellow VW bus we saw over a week ago when we were still just starting our journey. 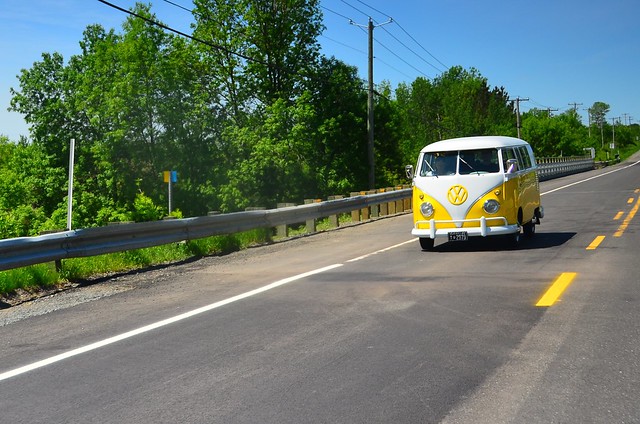 And thus everything comes full circle 🙂