Sete Cidades and the west end of São Miguel

Few things are as awesome as waking up in the morning and knowing that the hardest task on your plate today is to figure out which of the numerous amazing places to visit first. If you pick a random image matching the keywords “São Miguel”, chances are it will feature the twin lakes of Sete Cidades, and that’s exactly where we decided to go. 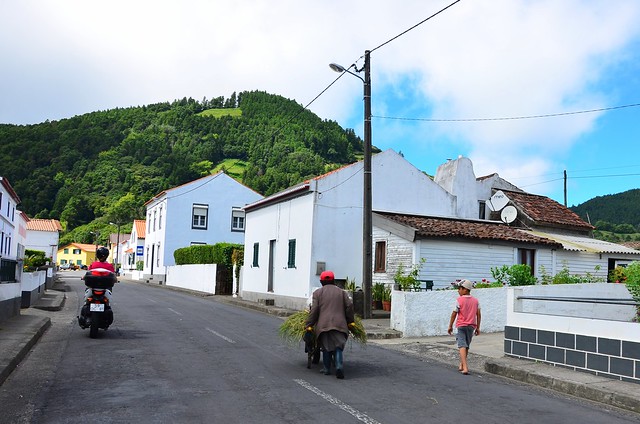 The streets of Sete Cidades.

First things first, we had some errands to run. We dropped by a dive shop in Ponta Delgada and arranged for a dive the next morning. Easy enough, and with business out of the way, we checked the compass and headed northwest to what is officially known as freguesia das Sete Cidades. Freguesia is just a fancy name for a parish. 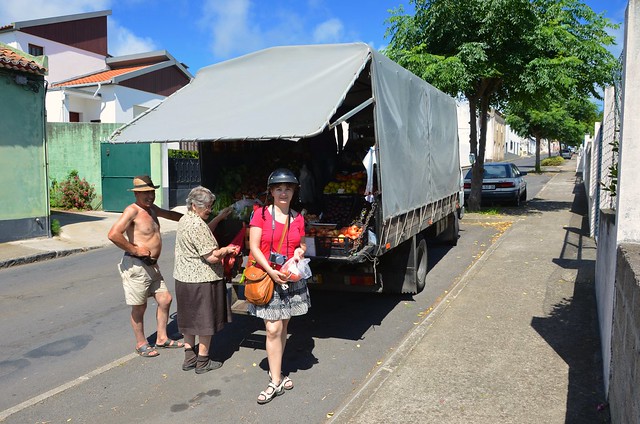 Getting tomatoes, mixing with the locals.

As expected, getting there is half the fun, if not the whole 90% of the fun. Everything is more fun when you’re on a scooter and can stop at any random spot on the road to enjoy the view, not just the designated lookout points. The fact that you get to lean into the gentle turns on the twisty roads doesn’t hurt either. 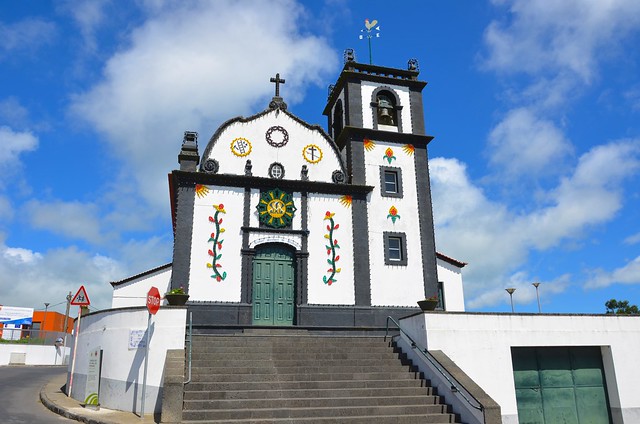 Church in Arrifes, along the way from Ponta Delgada to Sete Cidades. 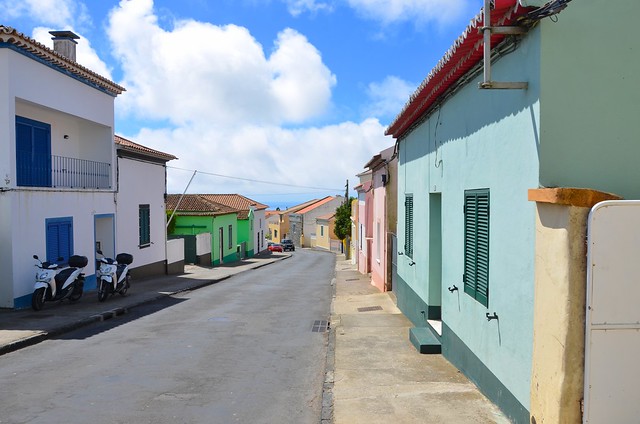 Streets of Arrifes (our scooters waiting in the shade). 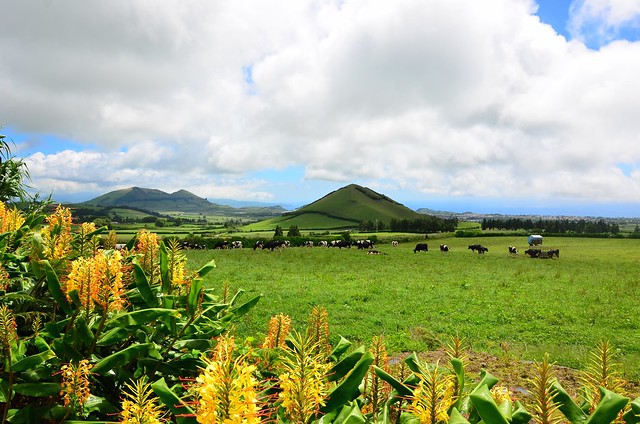 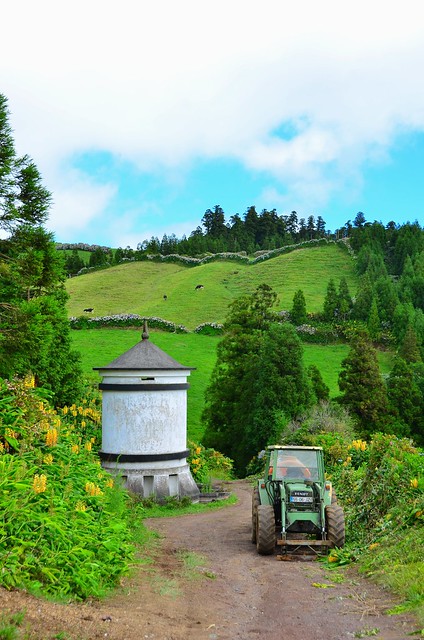 An old mill among the fields. 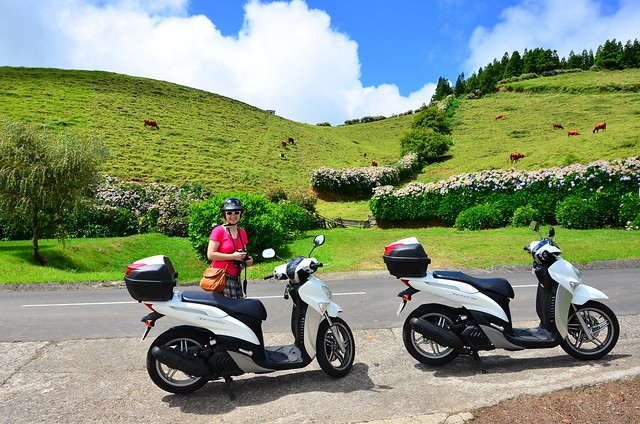 Stopping for photos. The brown cows will eventually be used for beef. (But the locals don’t know the English word “beef” and just explain that your meal will contain “cow”.) 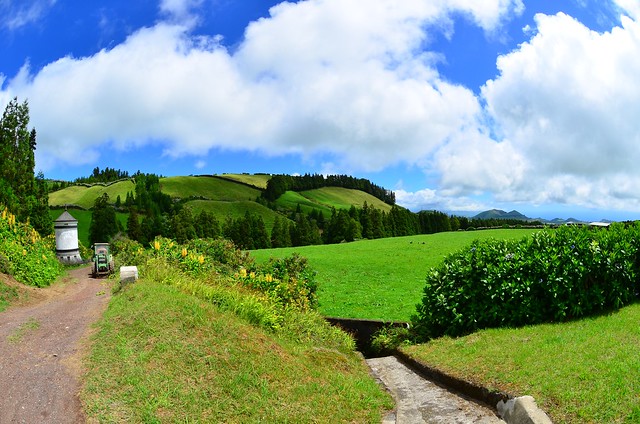 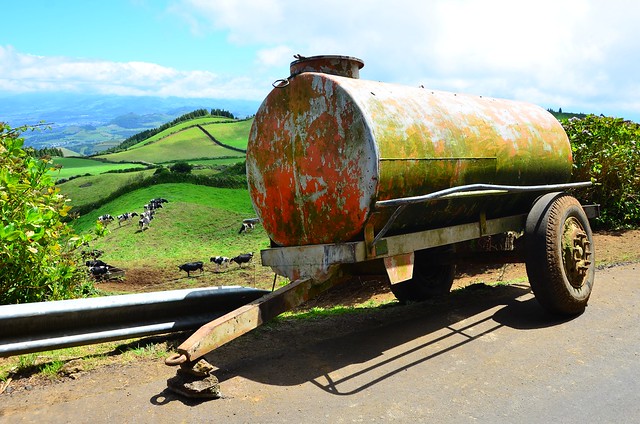 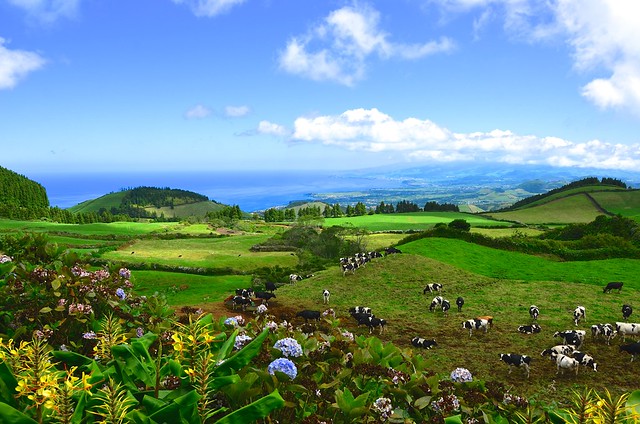 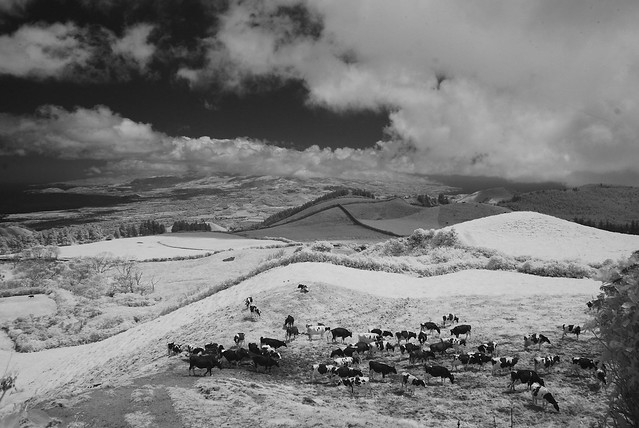 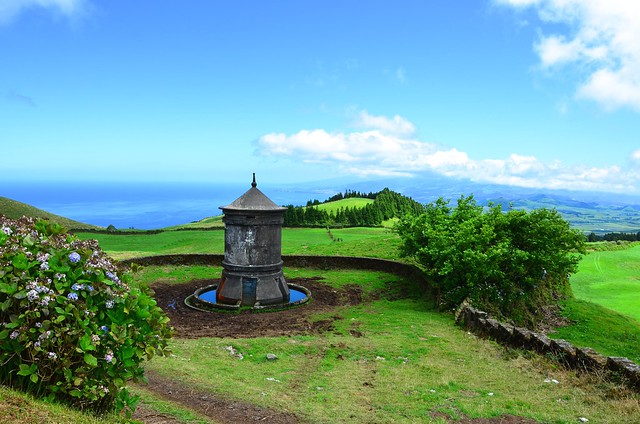 Another old mill on São Miguel. 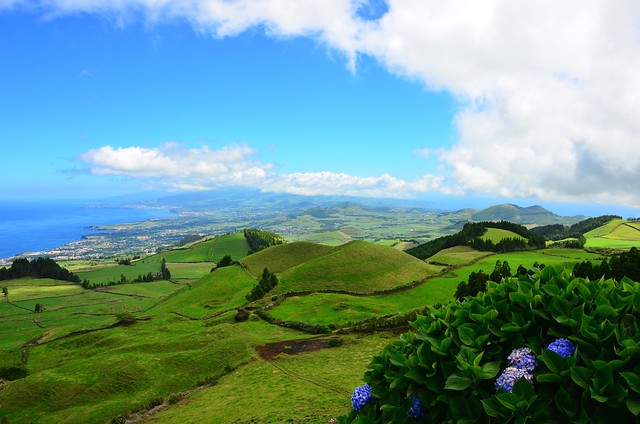 Looking towards the east end of São Miguel, you can see the north and south shores simultaneously.

By the time we reached the iconic blue and green lakes, we were in desperate need of a lunch break. Having seen so many beautiful vistas along the way, we were not quite as impressed with this freguesia as one may expect. Nevertheless, we spent some time eating ice cream outside of the local church (every freguesia has a church, if not three) and walking around the tiny community. 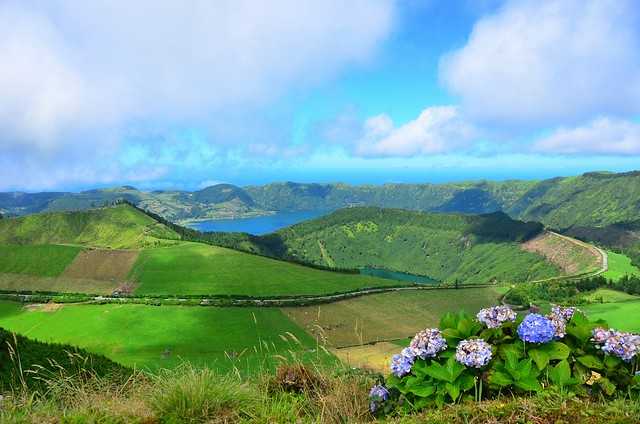 The Sete Cidades lakes visible from the distance. 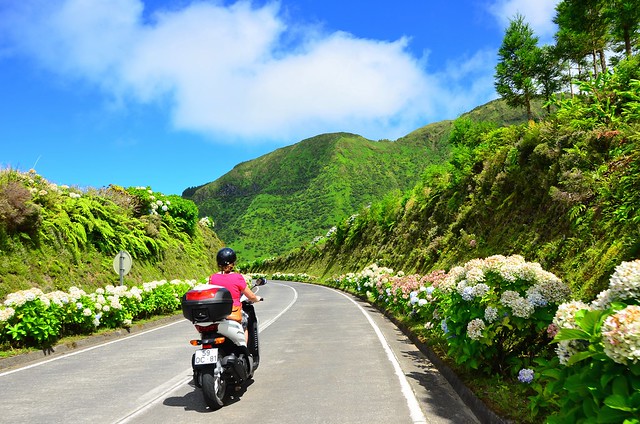 Twisty mountain roads on the way. 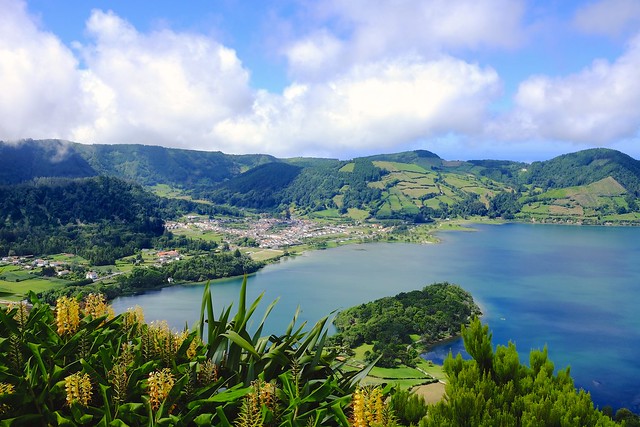 The blue lake and the town of Sete Cidades. 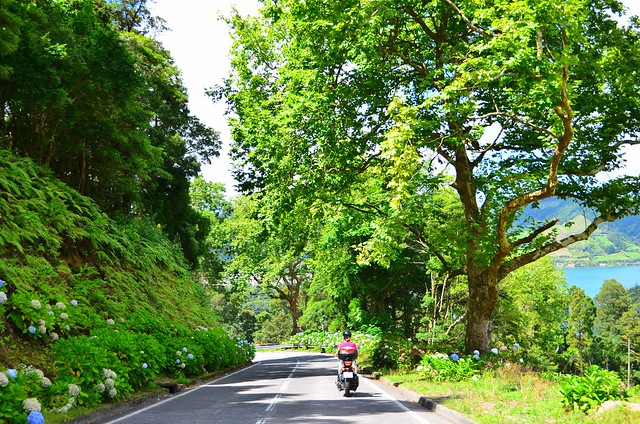 The beautiful road close to the town, with the blue lake visible on the right. 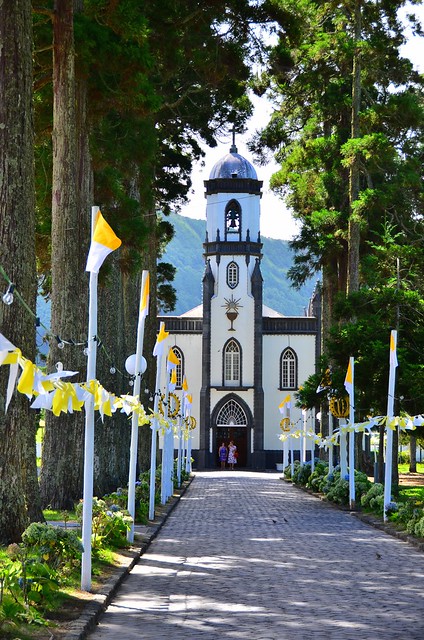 The church in Sete Cidades.

Eager for another serving of the refreshing ocean, we continued to the coast, stopping by a small village of Mosteiros. Here I’ll take a break for a quick language lesson. The first thing a foreigner notices about Portuguese speech is a lot of sh-ing going on. The thing is, the letter S has 3 possible pronunciations, depending on other letters around it. At the beginning of a word it is pronounced simply s, in the middle or end of the word but preceding a vowel, it is makes a z sound, and finally, in the middle or end of the word but preceding a consonant, or at the end of a sentence, it sounds like sh. That last one seems to be the most commonly used configuration, and makes it fairly easy to tell that you’re listening to Portuguese, and not for example, Spanish. So the name of the beach we went to, using more English-friendly spelling, would be Moshteirosh. Weird but true. 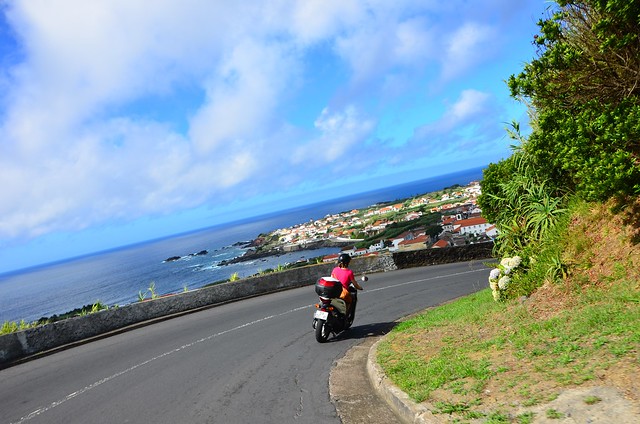 The black volcanic sand was warm, but the water was being whipped by waves into a slightly murky mix of seaweed and sediment. Not snorkelling material, not today. We did take a short dip, but afterwards decided to walk around a coastal trail that leads from the beach to the village. 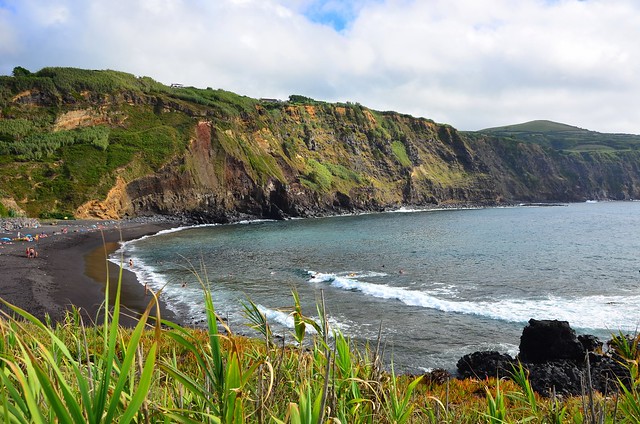 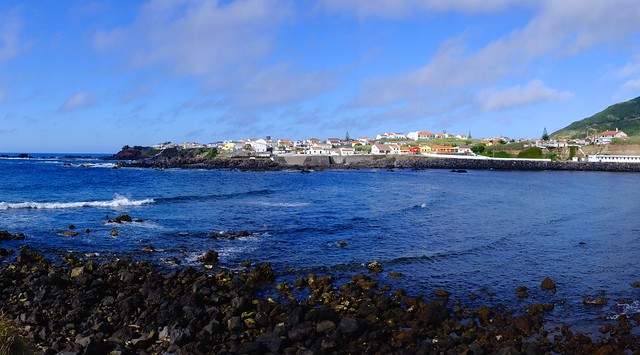 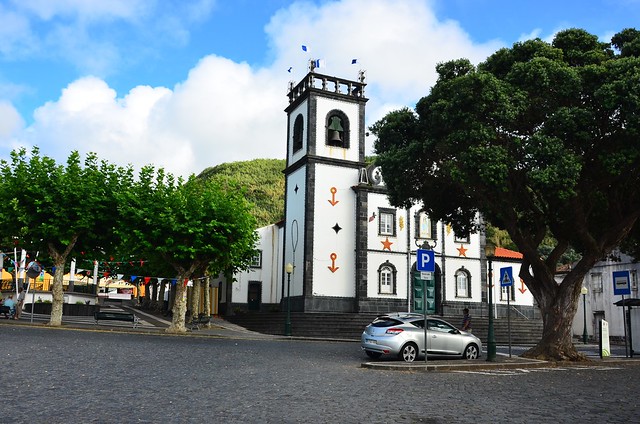 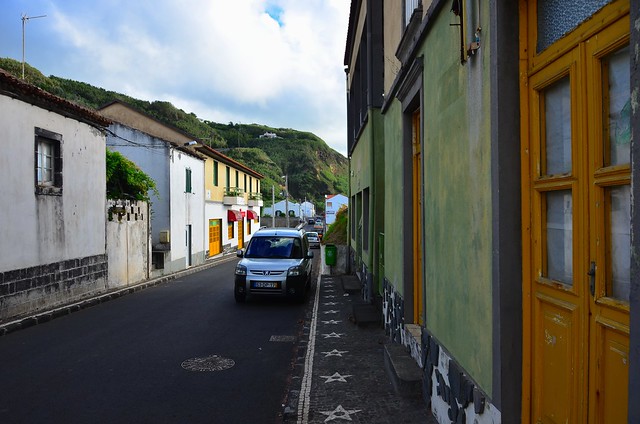 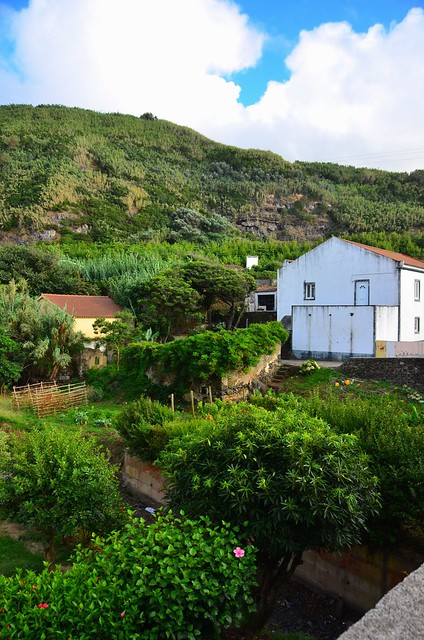 We still had hopes of finding a good snorkelling spot, and set our eyes on the São Roque beach just east of Ponta Delgada. The ride through the twisty roads heading south along the west coast was beautiful. With the evening approaching we had to go a little faster than sight-seeing pace. Adrenaline pumping, we took consolation in leaning harder and hitting each apex on the dozens of corners that separated us from our praia. 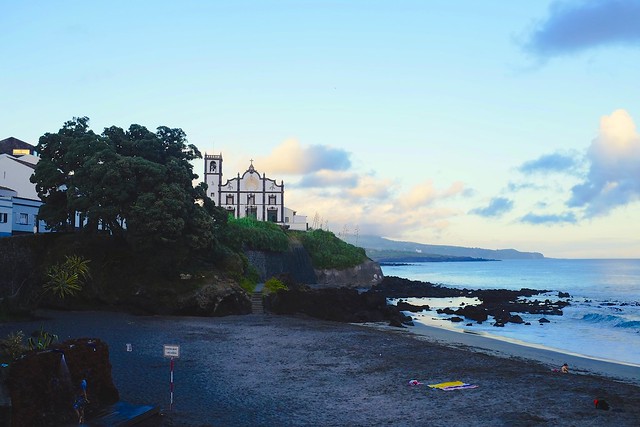 The beach in São Roque, with the beautifully decorated church.

The village of São Roque was so typically Azorean – narrow streets, a church overlooking the ocean, black sand, and mellowness all around. It was getting darker and colder, and instead of getting into the water we just walked around the beach, watching the sky change its colour, the waves hit the funky rock formations on the shore. In one area of the beach the water was streaming down from a nearby hill into the ocean, probably due to decreasing tide. It looked like a small river was entering the water, though there was no trace of a river, the water seemed to come right from inside the sand. We took our sandals off to tread in the shallow water, and noticed weird puffing going on underneath, like an underwater fountain sputtering up sand by an unknown force. If you try to stick your foot into it, you just fall in by about 20 cm, until the fine sand is replaced by small rocks underneath. This leads to a temporary collapse of the “fountain”, but after a short while the stream of water finds a way to puff up again, in a gentle but persistent fashion. 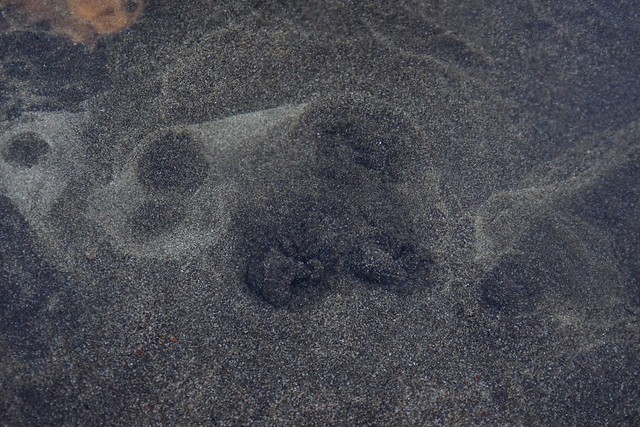 And so it goes.