The Mountain and the Red Desert

As quiet as the island of Santa Maria is, it’s got a rather respectable amount of points of interest per km2. Aside from the ocean, it has a mountain peak, Pico Alto, measuring a whole 586 m. Hey, it’s still taller than Curaçao’s Christoffelberg or anything in the direct vicinity of the flatland that is Toronto. More curiously, Santa Maria is home to a red desert known as Barreiro da Faneca. Unique in the Azores, this landscape makes you double check if you have been accidentally teleported to Mars. Who wouldn’t want to ride a scooter on Mars? 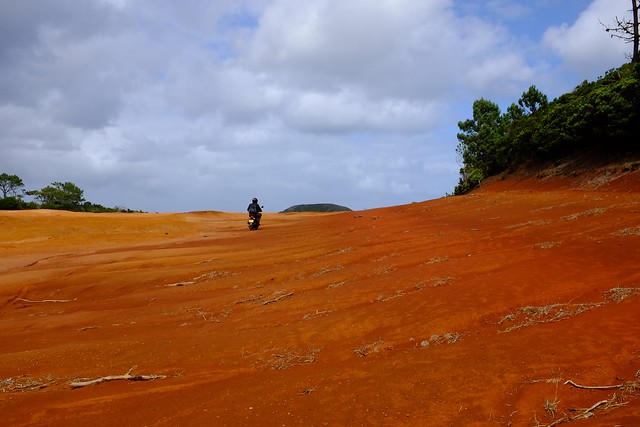 Speaking of riding scooters. The path from the main road to our guesthouse is a fairly steep, poorly maintained trail, followed by some rocky steps. For most people it means a tedious climb up by foot, since you’d be pressing your luck way too hard navigating the narrow path in a rental car. With scooters, we can at least make it half way up, until we reach the steps. The first time I tried to ride it up, I failed spectacularly and scratched a mirror, but with a little practice, it became an overwhelmingly better alternative to walking. And what goes up, must come down… 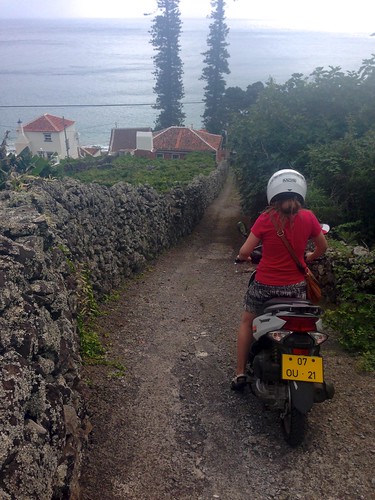 Our neighbours, a couple living in a house at a slightly lower elevation on the same trail, decided to show us their other house. Just a short ride from São Lourenço, it’s located in a more farm-like area. Apparently, one of the small issues they had was the cows of the farm next to them coming to graze on their grass, much to the dislike of the cows’ owner. The couple were originally from Austria, but have been living on Santa Maria for 20 years. It was interesting to find out why they decided to leave mainland Europe, and how they link the perceived instability of the continent to EU’s expansion East to countries such as Poland. 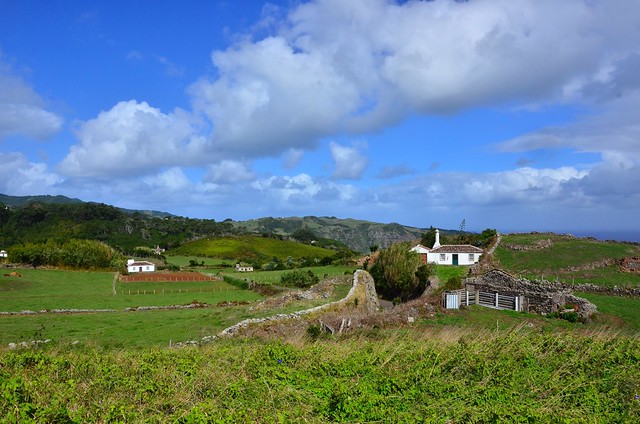 View from another small patch of Santa Maria 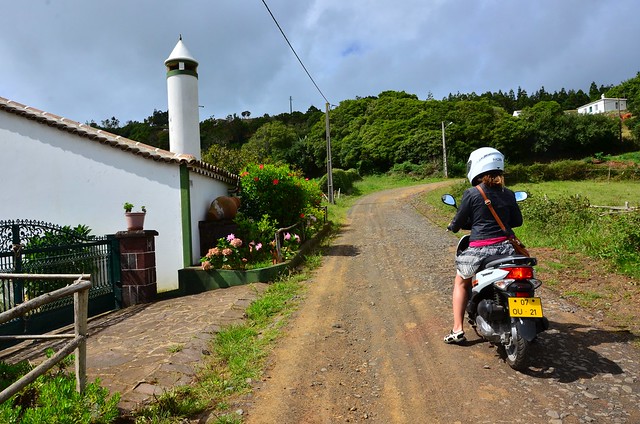 The particular circular chimney design is unique to Santa Maria and is rarely found even on other islands in Azores. 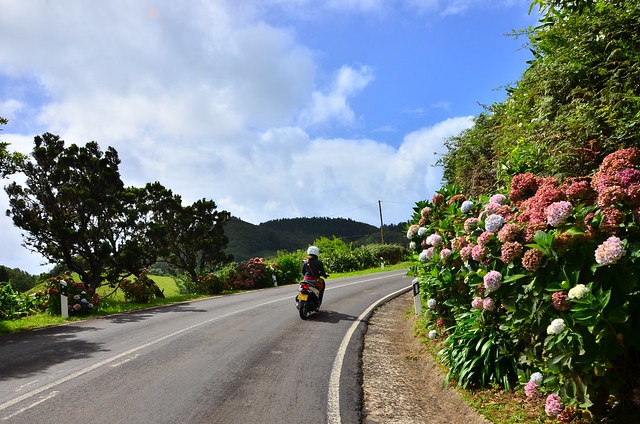 Next stop: the island’s highest point, Pico Alto. The peak is home to many of the island’s communication antennas and has an easy road leading to it, no rock climbing required. Surrounding the road are some of the lushest green forests on Santa Maria. 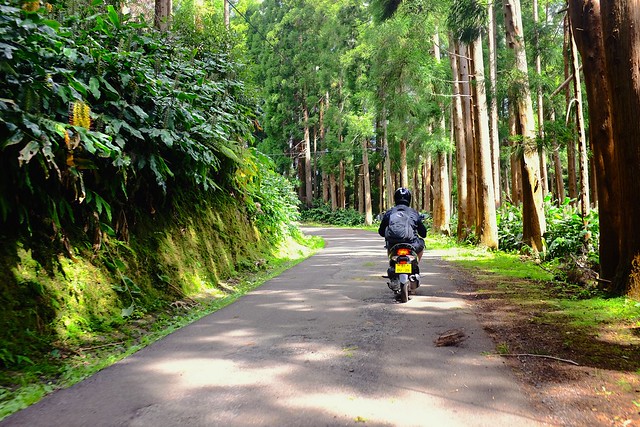 The forest on the way to Pico Alto is sheltered from the sun and surprisingly cool even on a hot day. 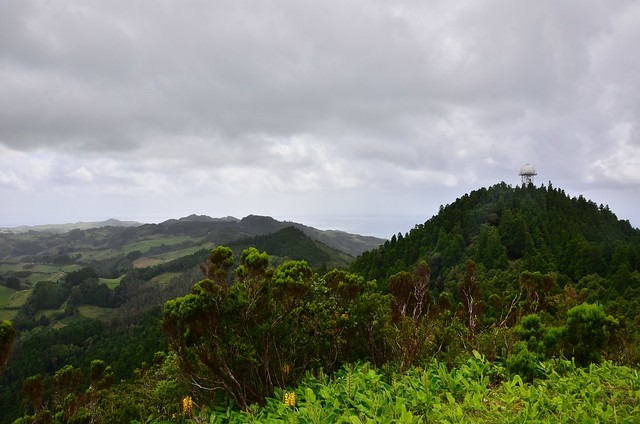 View near the top of the mountain. Wait, it gets higher… 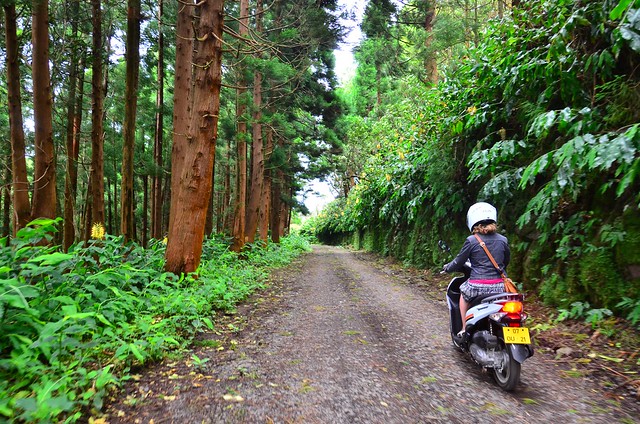 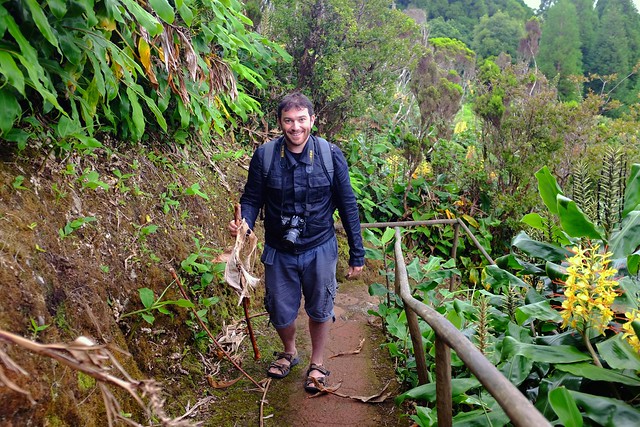 We have to climb the last stretch on foot. 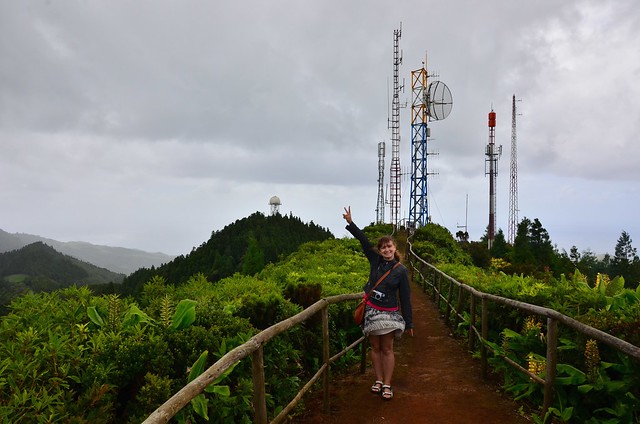 The very peak of Pico Alto also serves the practical purpose of being the island’s communications hub.

As we stood at the very top looking at the 360º view of the island, we noticed rain clouds coming our way. It did not take long for the torrent to reach us, and the only place we found to hide from it all was a particle board plaque describing the geology of the mountain. Good thing nobody else was visiting at the time, there was only enough room for two. 😉 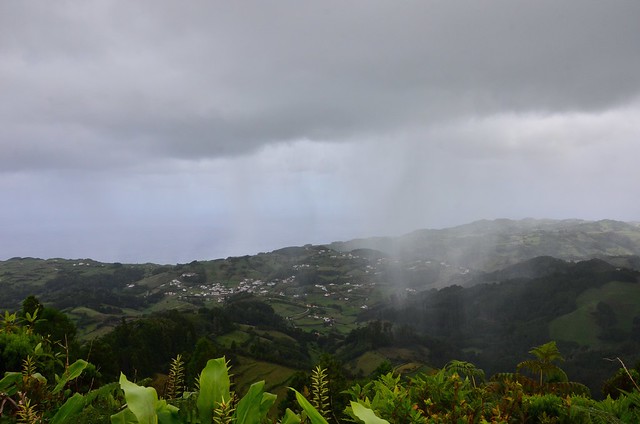 The warm Azorean rain coming our way. Clearly, it takes more than just santo espírito to keep everything this green. 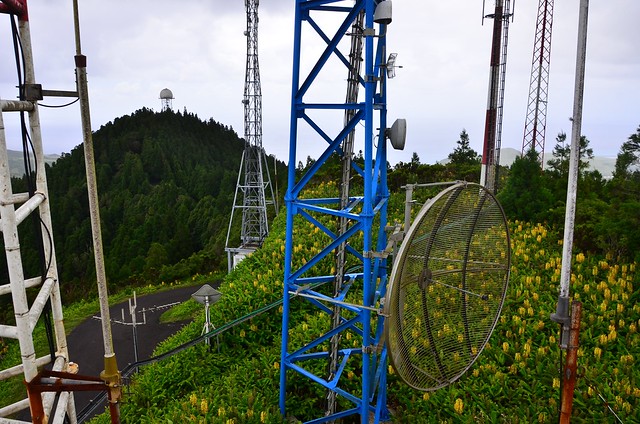 Was I not supposed to climb the antennas?

The rainy clouds were soon replaced by blue skies, and we went looking for the mysterious Barreiro da Faneca. The basic tourist map of the island did not include this spot, possibly on purpose. Online resources mention it being a sensitive natural area with a status of Protected Landscape; perhaps making it less obvious to find was the intention. Either way, the size of the island is small, the number of roads is limited, we knew we were on to something when a pile of orange clay suddenly appeared on the side of the paved road. And soon it got even better. 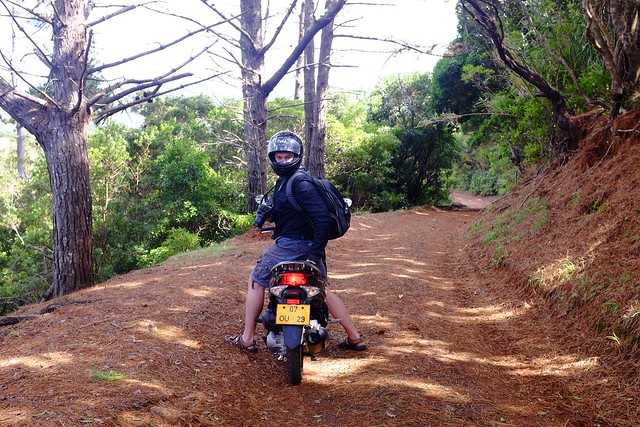 Barreiro da Faneca: you can smell it coming.

A short while later, it appeared in all its glory: an expanse of red clay, with small dunes, ridges, and a border of the quintessential Azorean green. 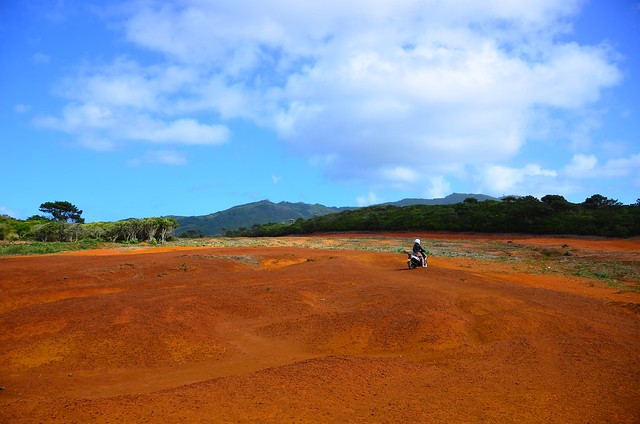 The red desert with a green border.

The majority of the space was dry and easy to traverse. A small area near the entrance had a depression where water had collected and formed mud. Alex could not resist the temptation to ride right into it. The street tires of the scooter kept spinning, but the effect was negligent. 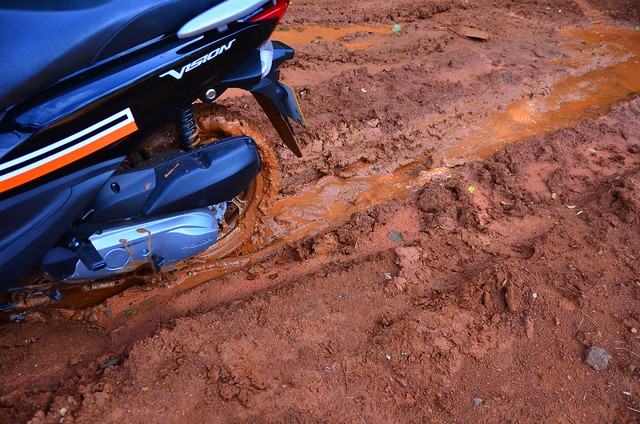 Orange is a perfect compliment to black.

Alex had to dismount and put a little extra effort into getting out of that small mud hole. The thumbs up he received from a passing dirt bike in Vila do Porto later that afternoon made it all worth it. It took a few more rainfalls to wash the clay off. 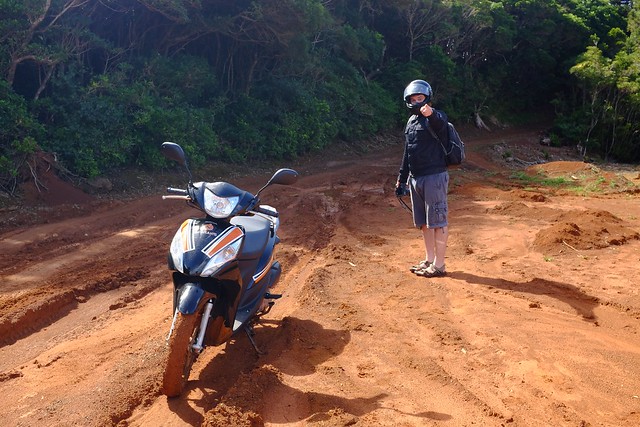 You! Come help me out! 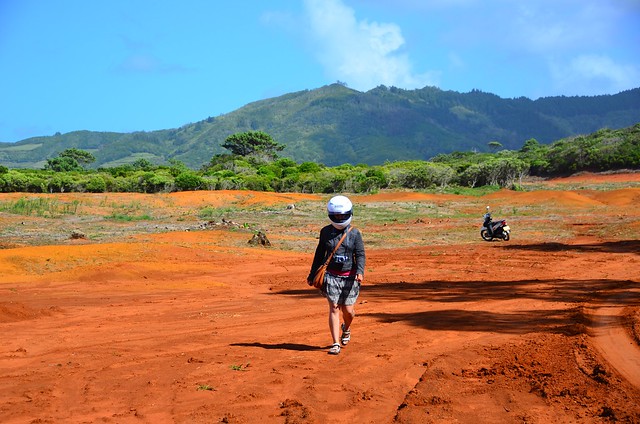 I’m coming, but only to take a photo.

We spent about half an hour riding all around this small desert. It truly is a surreal landscape. 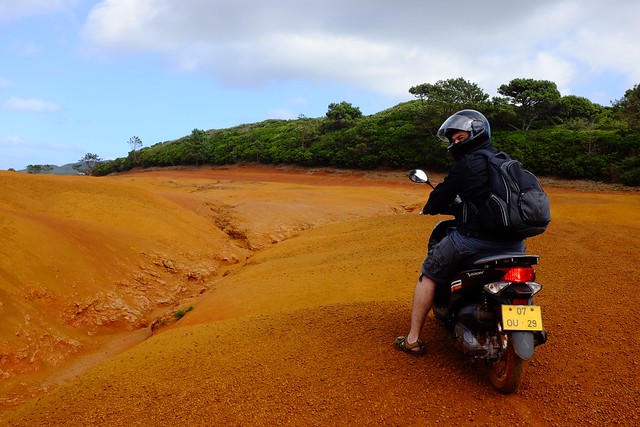 The colour of the clay shifts from deep brown to yellow with everything in between. 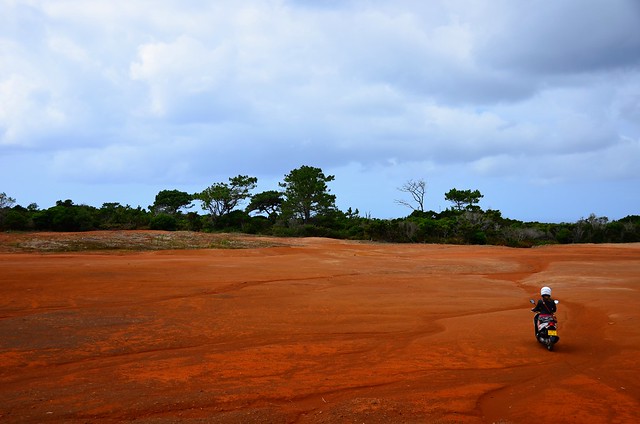 Vegetation is sparse inside the red region, making it very unusual compared to the floral activity going on everywhere else.

At the opposite side of the Barreiro there was a trail that lead further on, into the woods. It seemed easy enough to do on scooters. 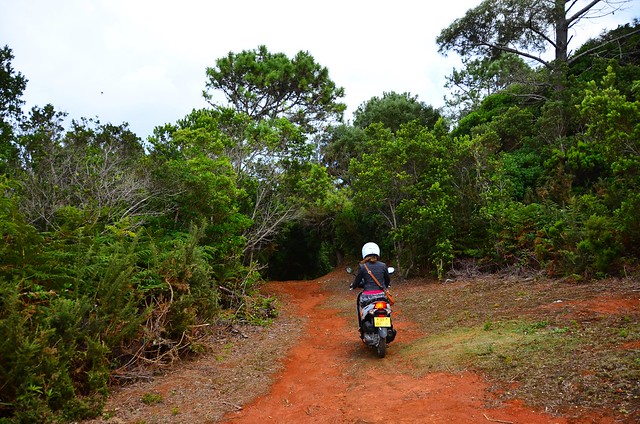 The trail goes on, the wheels keep spinning. 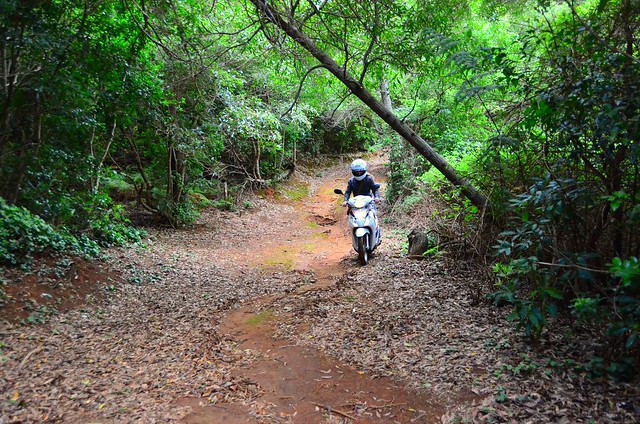 The insects are buzzing, the leaves are growing.

Soon enough though we had to admit that it’s a little too advanced for these city-friendly two-wheelers: the soft mud did not offer a lot of traction to our tires. 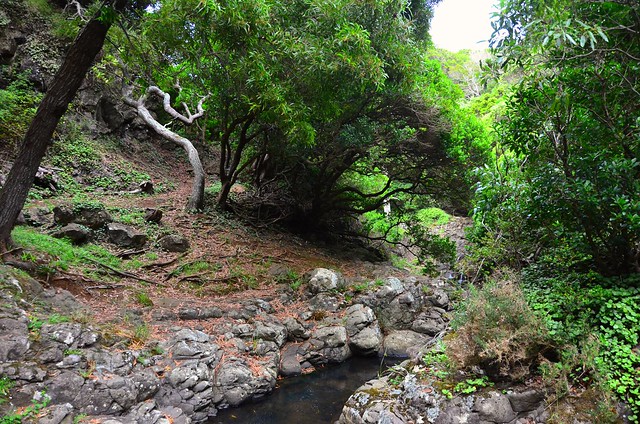 I’m sure our rental agency appreciated that we did not attempt to use the scooters to cross the rocky creeks that make up parts of the trail. 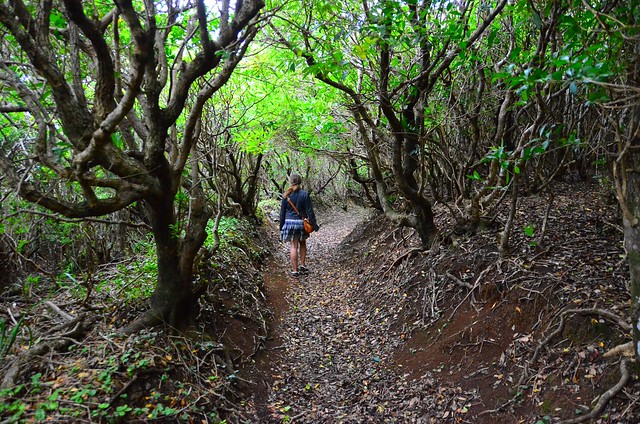 A large portion of the forest is comprised of the endemic Laurus azorica trees and the invasive mock oranges.

Finally, the forest opened up and here we were, tens of meters above the sea level. More time spent contemplating the meaning of life while watching the waves roar far below us. 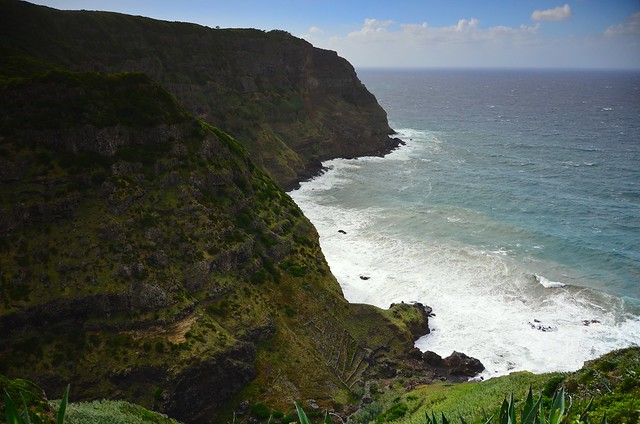 The cliff at the edge of the forest. Note the small vineyard in the centre, closer to sea level.

The trail continued further along the cliffs, but we decided to head back the same way so that we can get to our scooters and get back to São Lourenço before nightfall. 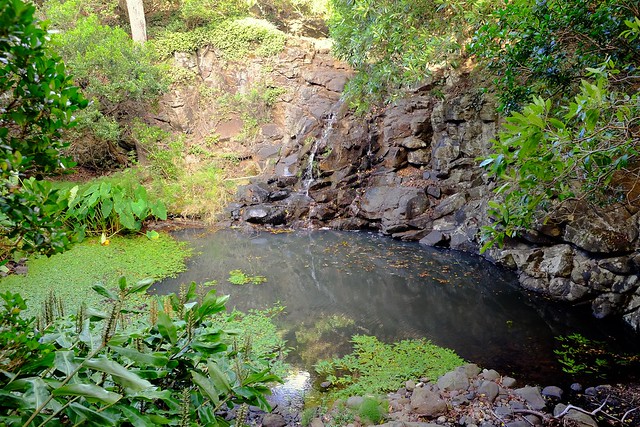 A quiet pond with a tiny waterfall creates a relaxing mood as you explore the trail. 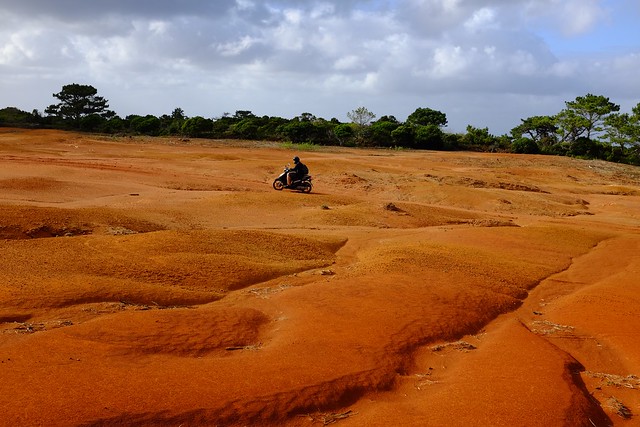 The desert in the golden light of the afternoon sun. 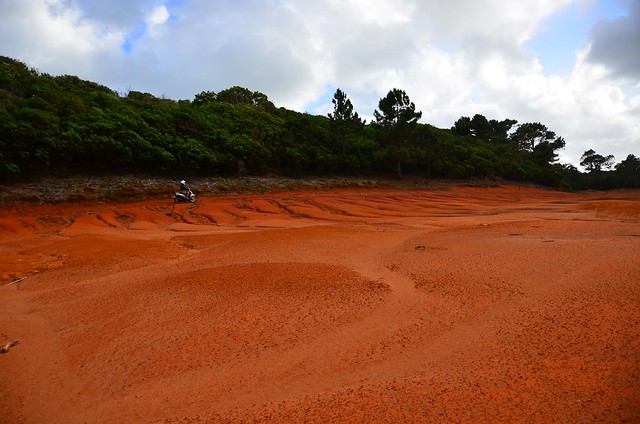 The astronaut is leaving Mars. 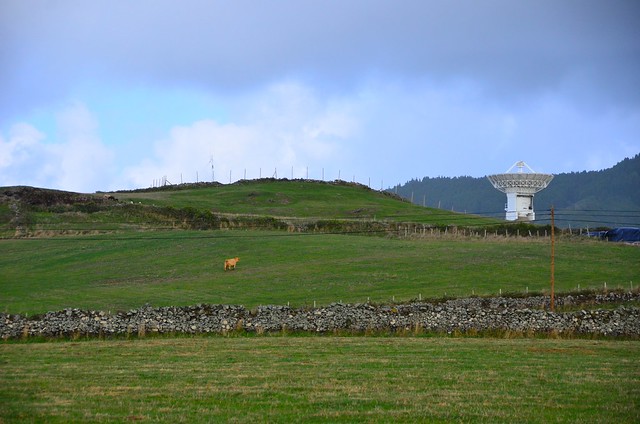 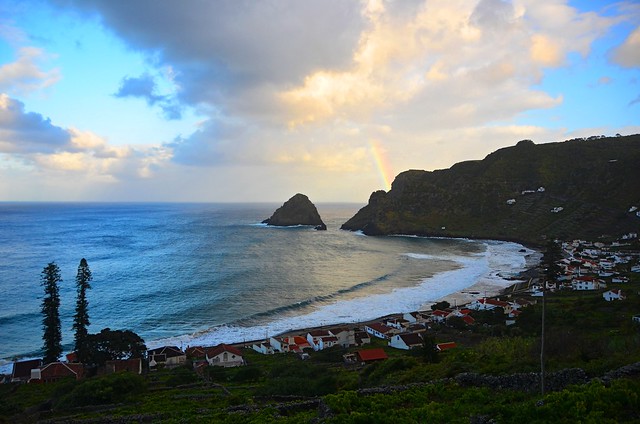 Our timing was just right to catch a rainbow peeking out behind the edge of the caldera in São Lourenço.