Being a relatively small island, São Miguel has a surprisingly large number of volcanic craters, and many of them are occupied by picturesque lakes. Opinions among the locals vary as to which one is the most beautiful, but the strongest competitors are Lagoa das Sete Cidades and Lagoa do Fogo. While the former can be traversed quite extensively by well maintained roads, and offers a civilized settlement for all your foodie needs, the latter requires a hike to be fully appreciated, and you better pack your own lunch, too! Armed with sandwiches made from bolos lêvedos we headed out for what our hostess Guida calls paradise on Earth. 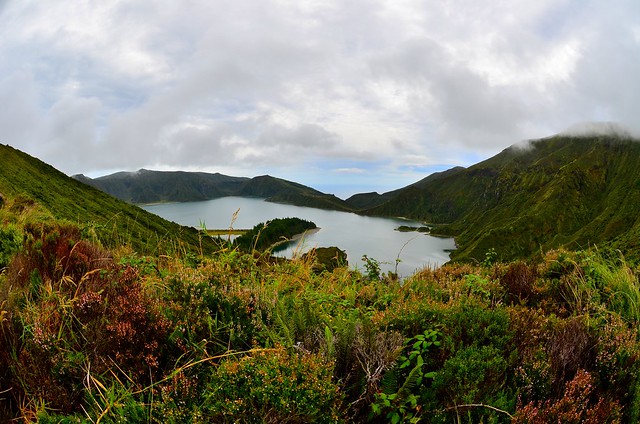 The road climbs quite a bit, winds back and forth, opening up to amazing views of Ribeira Grande as we approach the lake from the north. It’s surrounded by a lush landscape dominated by the yellow flowers of Hedychium gardnerianum. 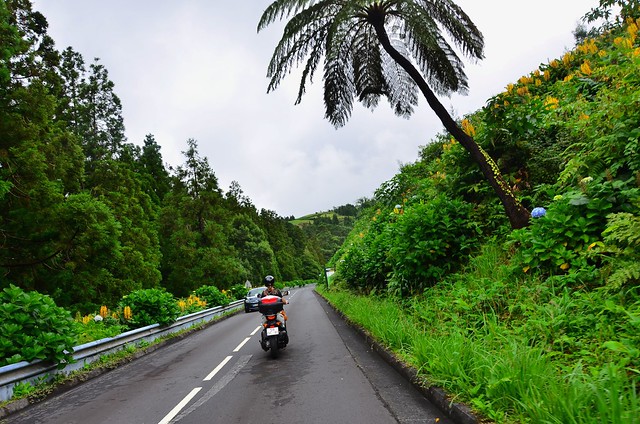 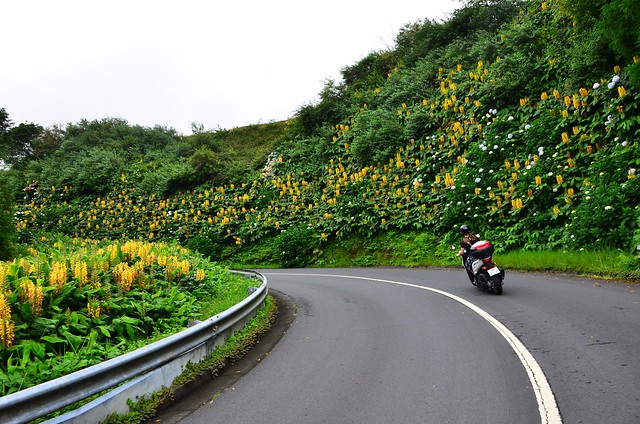 Known locally as Roca-da-velha, these plants are actually an invasive species in Azores, and originate from the Himalayas.

Although Lagoa do Fogo (Lake of Fire) is one of the feature attractions of the island, the strip of space reserved for parking near the main trailhead is rather small. It’s easy enough to find a small spot for our scooters, but some cars had to park right on the road.

There are several ways to enjoy this location. Quite a few people were content just sitting at the top of the crater, looking out and snapping pictures from the “parking lot”, if you can call it that. Others were taking a hike down a fairly well marked trail that even included such amenities as stairs. We, on the other hand, decided to take a different route, one that seemed to lead up along one of the ridges. No one else went there, so it must be good 🙂 . 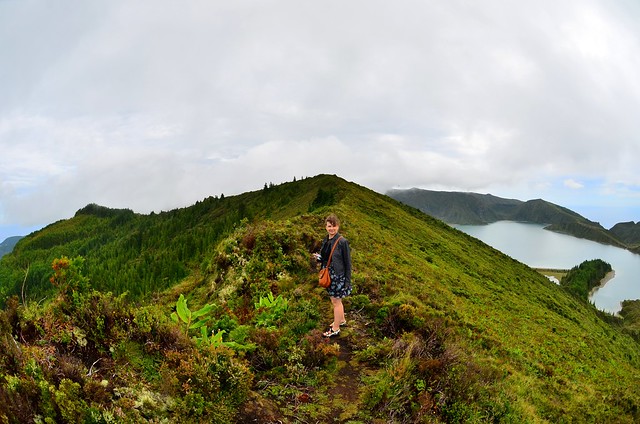 The ridge around Lagoa do Fogo. 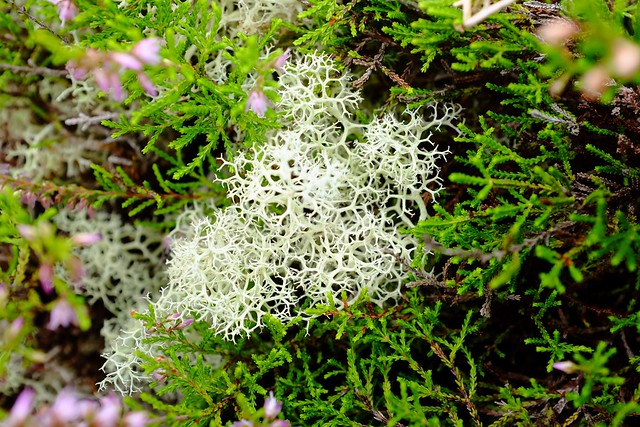 The ground is covered in plants, not all of them green. 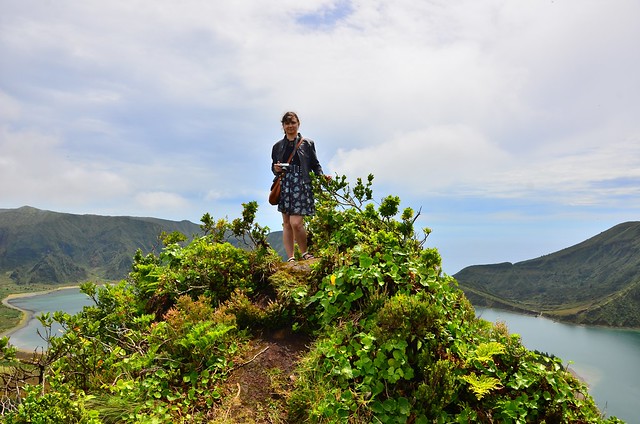 A small peak before descending further towards the lake.

The trail headed upwards for an additional 100 meters of altitude before slowly making its twisted way to the lake. Along the way it almost disappeared entirely, hidden by the fierce vegetation. A couple of times we found ourselves positively off the trail and had to turn around and take a different path. At some point the trail began to coincide with some promising goat droppings. It seemed like a good sign: if the goats made it, so can we, right?

Panoramic view of the lake. 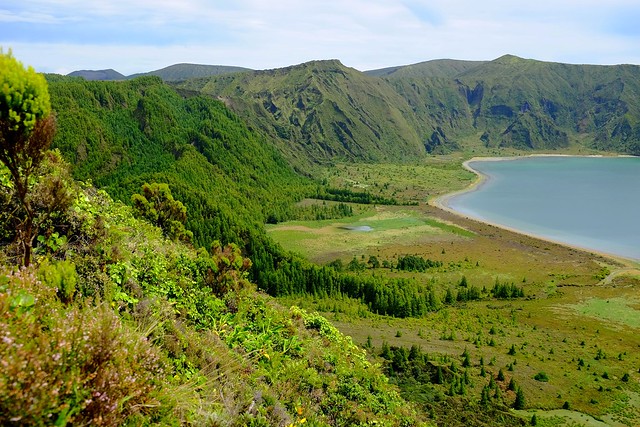 The mountains turn into marshes before the blue-green lake takes over. 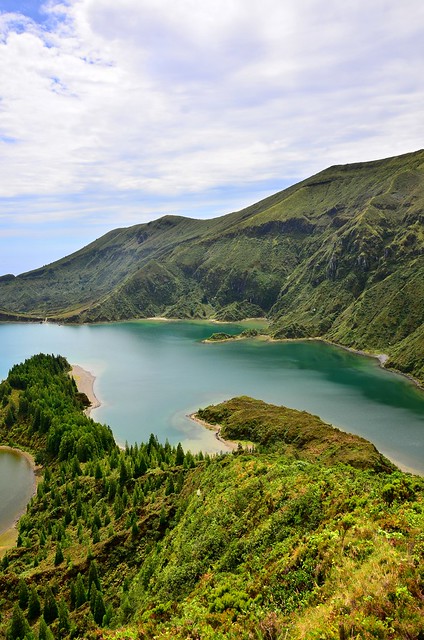 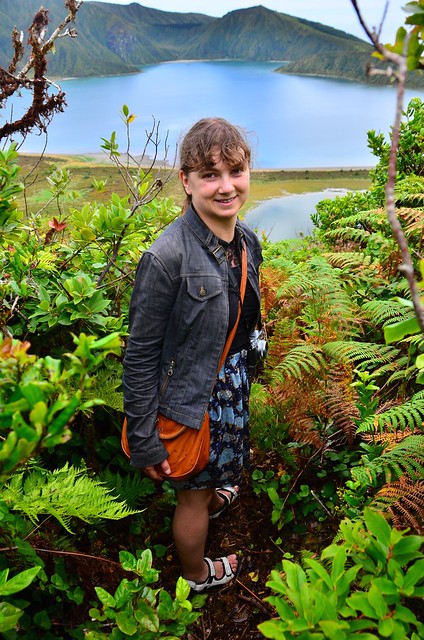 The trail is barely wide enough to turn around! 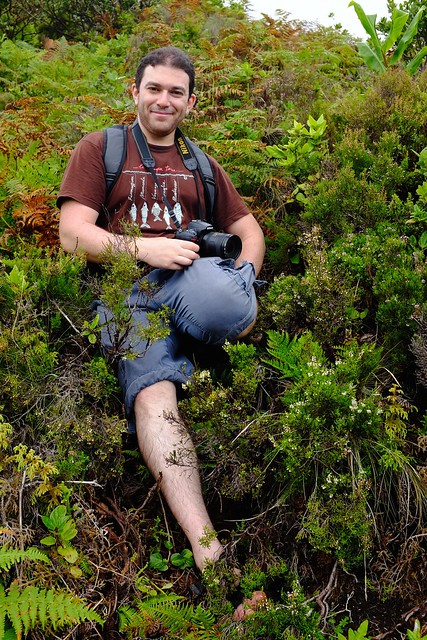 Alex takes a short rest after slipping on the trail. It’s right behind him, yet it’s very easy to miss. 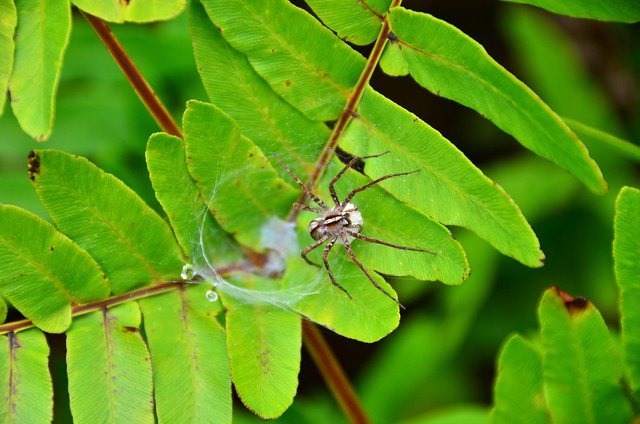 A tiny spider on the trail 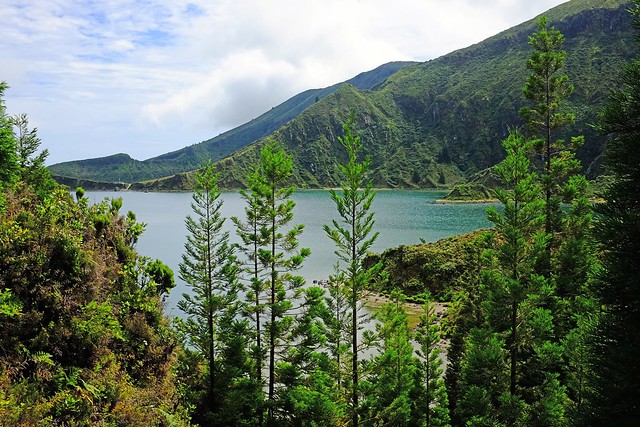 The lake is getting closer and the tall trees start dominating the view.

Although we did not spot any of the goats, towards the end the trail cleared up and it became easy enough even for the most inexperienced of goats. The area where the trail met the lake was surrounded by tall evergreens and felt so different from the highlands covered in stubby prickly shrubs. Fine sand marked the shore. A few people were sunbathing after a swim. Separated from the ocean, the water was calm and harboured some fish. We noticed a couple of trouts just a few meters from the edge. They were quite large and tempting, but as we didn’t have any fishing gear, we had to settle for our sandwiches. 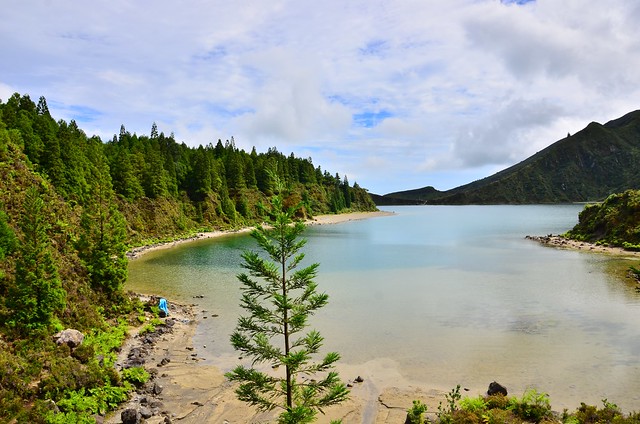 A beach on Lagoa do Fogo. 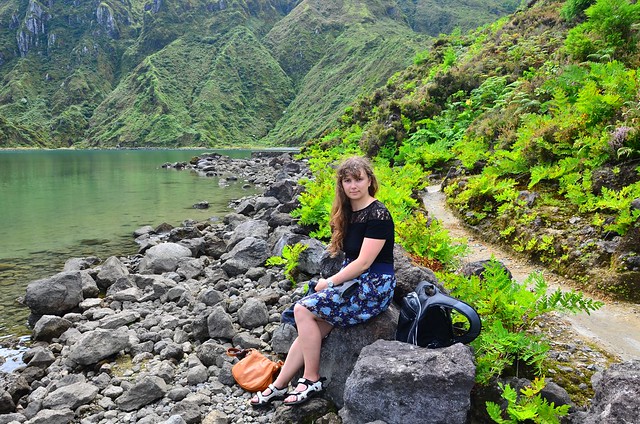 Lunch break by the lake.

Nestled in the middle of the ring of mountains, the lake feels quiet and peaceful. It’s not so much a spot to see, as it is a spot to experience: take your time and take it in. Perhaps it’s a good thing that Lagoa do Fogo is only accessible via somewhat more demanding trails – it forces you to slow down and get to know it a little better.

We walked around the shore, noting a couple of dark caves (maybe that’s where the goats spend the night). On the way up we took the better marked trail, the one with a certain semblance of stairs on it, travelled frequently enough that it does not get engulfed by vegetation. After that, we continued by the mountain road, liberally stopping for photos, or just shooting while riding and making fools of ourselves. 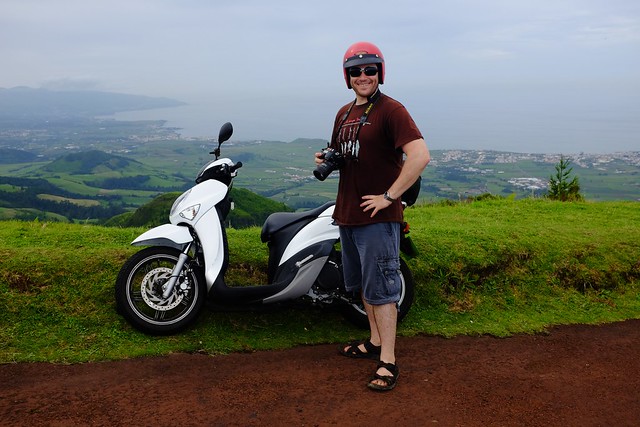 Enjoying the view of the north shore of São Miguel. 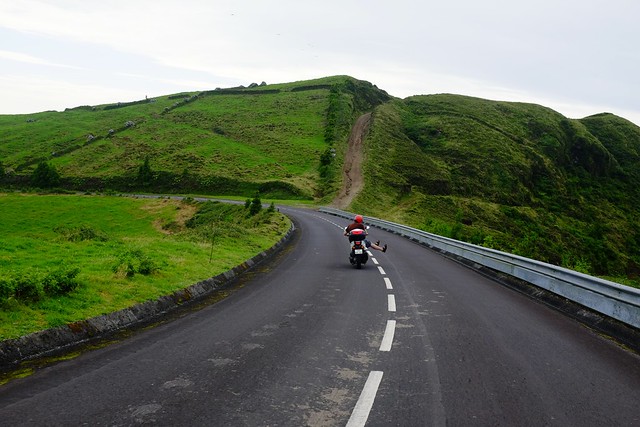 Fooling around on the empty roads. 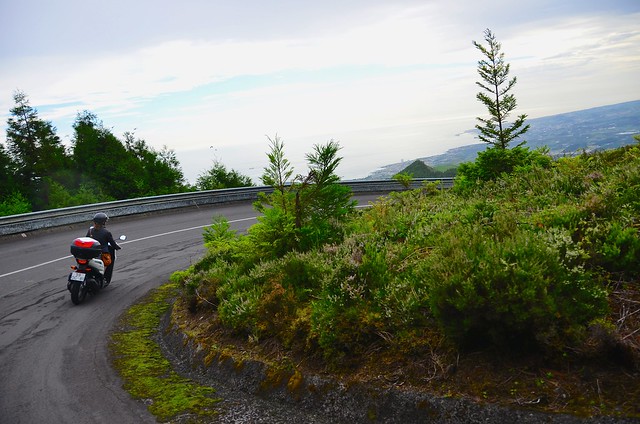 The obligatory sea-side beach of the day was Àgua de Alto, located on the south side of the island. The long sandy beach was fairly empty by the time we reached it in the evening. After playing around in the water, we headed towards the edge of the beach, where the waves kept hitting the black volcanic rocks, slowly hypnotizing any onlooker. 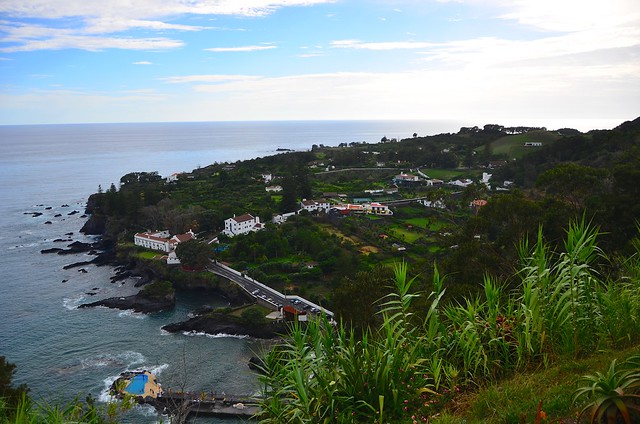 View of the village of Caloura. 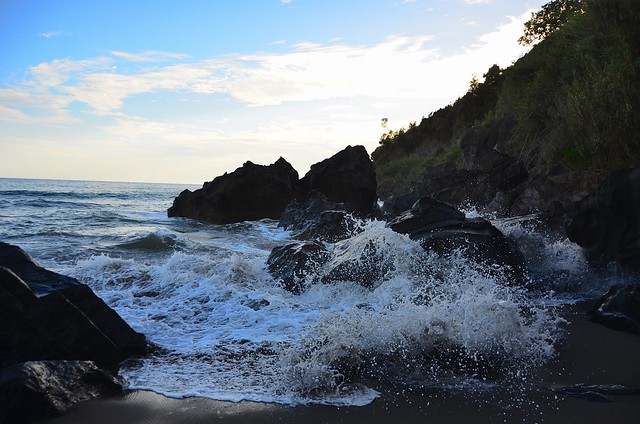 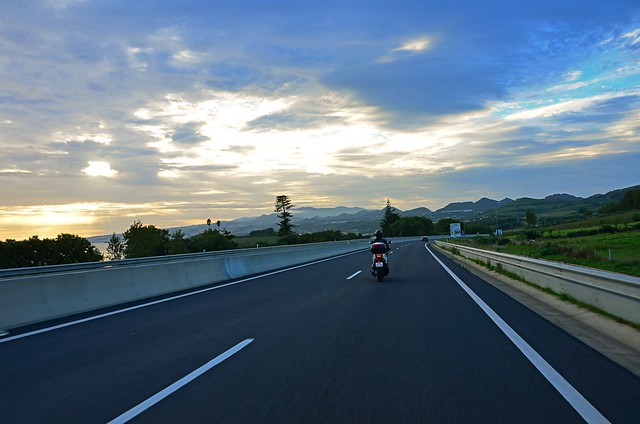 The ride home with the setting sun. 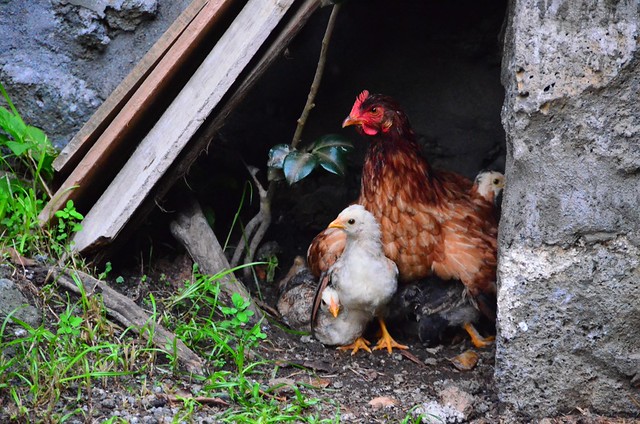 The friendly chickens on our farm. 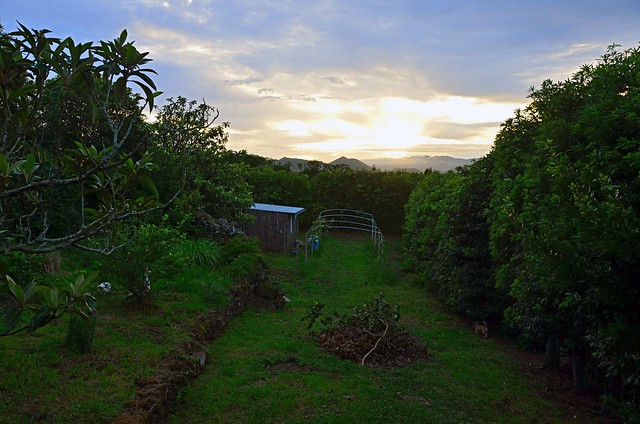 Sunset over the mountains seen from the farm.

azoresLagoa do Fogosão miguelscootertravel
Into the blue and into the green
Ocean, the great and powerful