Islet of Vila Franca do Campo

A 5-10 minute boat ride from the marina of Vila Franca do Campo is a small islet that’s quite a popular spot for both locals and visitors of the island. In the center of this volcanic islet is a perfectly circular bay filled with crystal clear ocean water. By some accounts, it’s one of the best places to snorkel on São Miguel, and we wanted to verify that for ourselves. 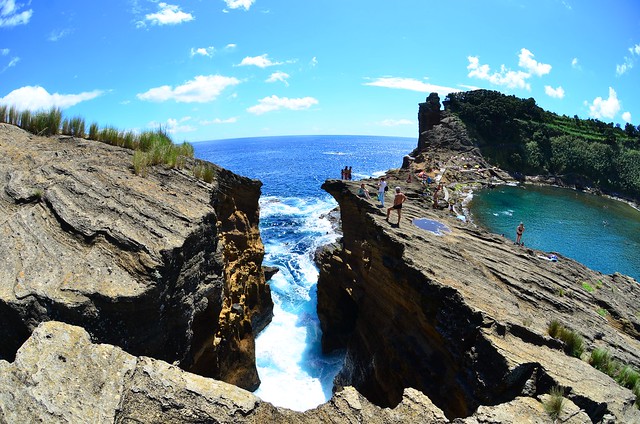 The deep waters on the left serve as a landing spot for cliff jumpers, while the mellow pool on the right is for everyone else.

We wanted to get to the islet as early in the day as we could, so we took the expressway straight to Vila Franca do Campo. The empty expressway was only a little less scenic than the smaller side roads, twisting slightly between the cliffs and green hills, offset by the blue sea. Found a parking spot near the marina and were right on time for the boat.

Panoramic view of the islet

The majority of the shore of the inner bay of the islet is rocky, and it seems that’s how some people like it. No sand to get everywhere, they say. If you go all the way around the bay from the dock you will eventually reach a small sandy stretch, which gets even more pronounced at low tide, but we weren’t interested in that. Rather, we got into the water and decided to play with our waterproof camera and see what kinds of interesting creatures we can find. 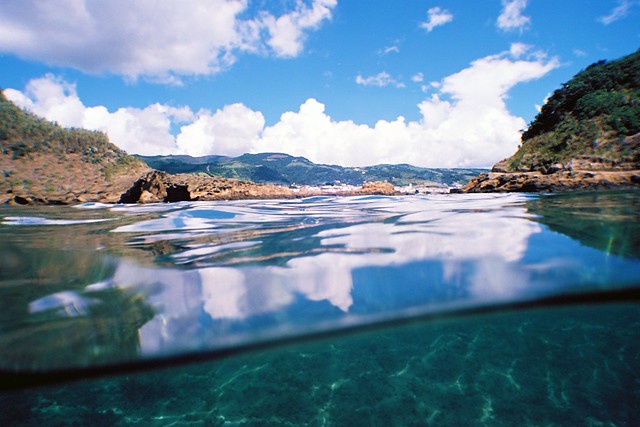 Islet of Vila Franca do Campo, shot right from its luxurious lagoon

The waters of the islet are indeed some of the clearest and quietest we’ve found. The bay is rather shallow, and in many spots you can reach the bottom with your feet, even right in the middle of it. The marine life is mostly various reflective silver fish, unsophisticated plants, and octopus. We kept bugging one octopus to be our marine photo model, and it complied quite nicely. 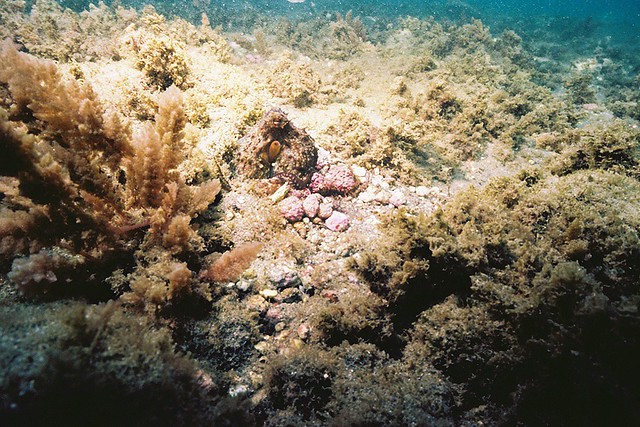 A shy octopus trying to get a tan

After finally running out of film in the waterproof camera, we decided to explore the islet on foot. The way around the islet is somewhat restricted. It’s a natural reserve and most of the area not directly around the inner lagoon is off limits to day visitors. There are life guards and washrooms, but no sale of food or drinks of any kind – perhaps to reduce the amount of garbage left behind.

A couple of guys stealthily coordinated a cliff dive while the nosy lifeguards weren’t looking. They did it only once, and I got a feeling that if the life guards saw them, there would be serious reprocussions. Later I found out that one of the events in the Red Bull Cliff Diving world championship takes place right here on the cliffs of this volcanic island, and it certainly makes sense. 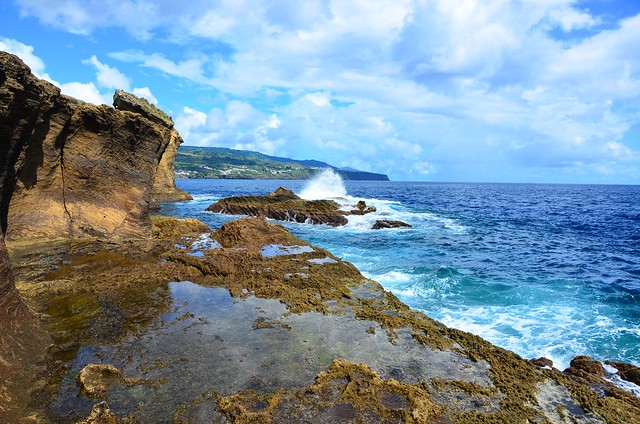 The main island is visible just a short distance across. 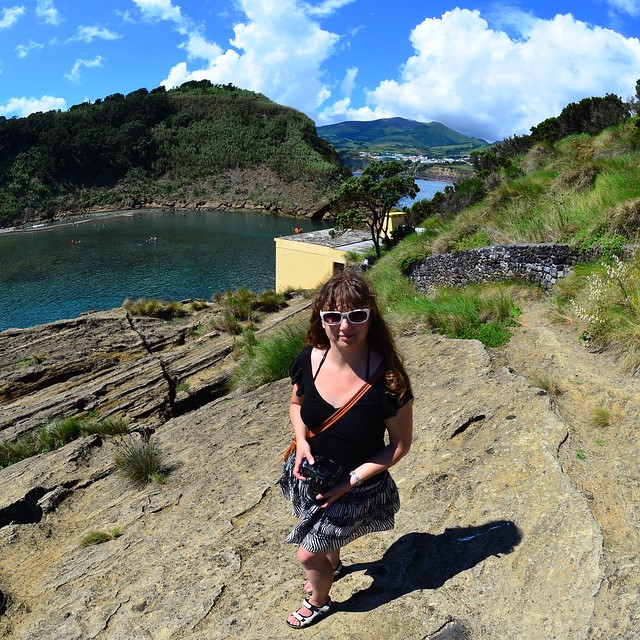 Climbing the rocks of the islet. 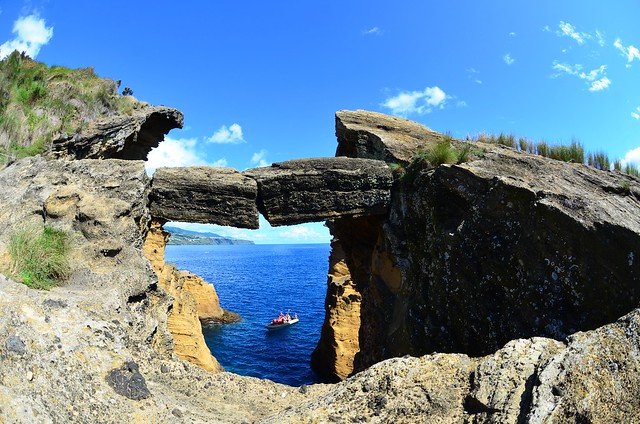 Alex was tempted to get a Darwin award by climbing these treacherous looking rocks for a photo, but yours truly convinced him otherwise. 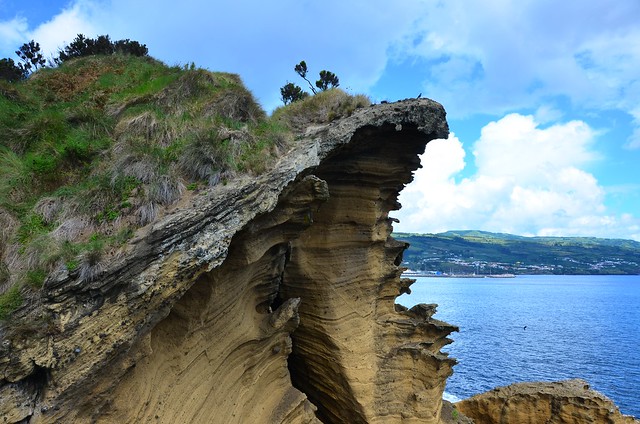 Centuries of water and wind erosion have carved inspiring shapes into the volcanic rock. 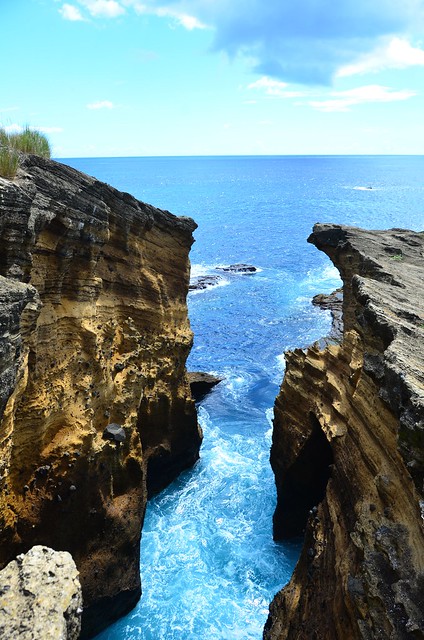 Trapped between two cliffs, a whirlpool is created.

The burnt yellow colour of the rocks is a perfect complement to the blue of the ocean, and if the sun was not so high and so strong, we would stay here much longer. The inexpensive public boat runs only from 10 am to 6 pm, so if you have any photographic aspirations, you’d have to hire your own boat for sunrise/sunset shots, though on the bright side, the location would be deserted and all yours. At midday, unless you stay in the water, it can get a little too much.

It was 3 pm when we decided to head out, and at that hour the amount of people looking to leave at the same time exceeded the boat capacity by a large margin. There was some drama as the captain was preventing people from boarding, and they pushed through anyway, and a woman was somehow separated from her infant baby, and the whole thing was getting really melodramatic.

Back on the main island, we rushed to Ponta Delgada to drop off the film for development only to find out that the film shop was closed. So we displaced our bad luck with some good food – fresh pizza. We walked around the town and the market a bit, stopped strangers to chat on the street, and eventually found ourselves on Santa Bárbara beach, watching the endless power struggle of the waves and the sand. The waves were breaking into fine mist on the beach, and the surfers took advantage of them, launching into the air with great precision and finesse. 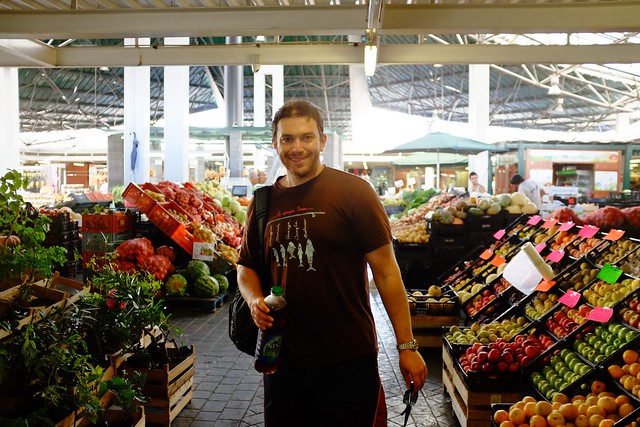 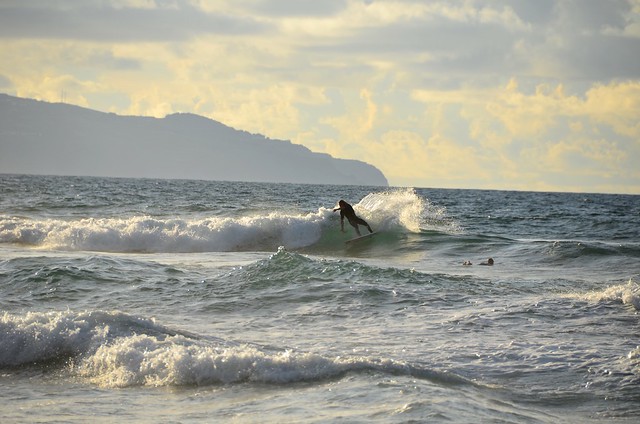 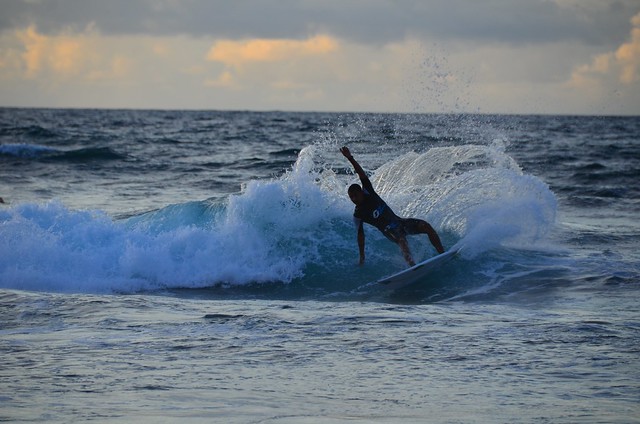 The sunset was beautiful and as the glow of it became more golden, the waves grew more gentle. The surfers did not give up, and many continued going out into the water over and over again. Eventually only the most persistent remained, and we decided to head back home before it became completely dark. 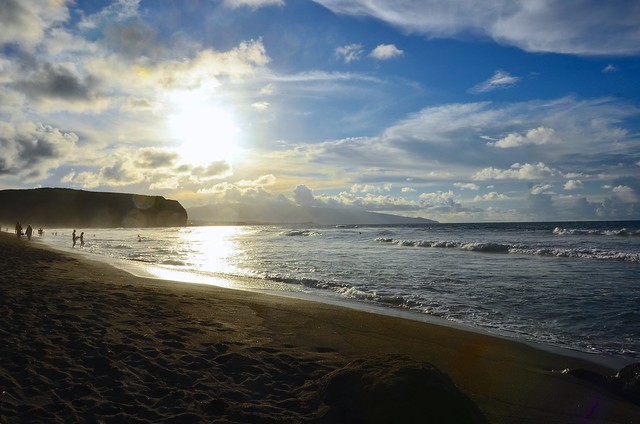 The beach under golden light

After dinner we sorted through the day’s photos and realized just how much work it must be doing action photography: it’s unlikely that you will get the perfect dynamic shot of a surfer if you only capture one, so you end up taking long sequences of shots, and then have to go through dozens (if not hundreds), just for that one that you wanted to take all along. 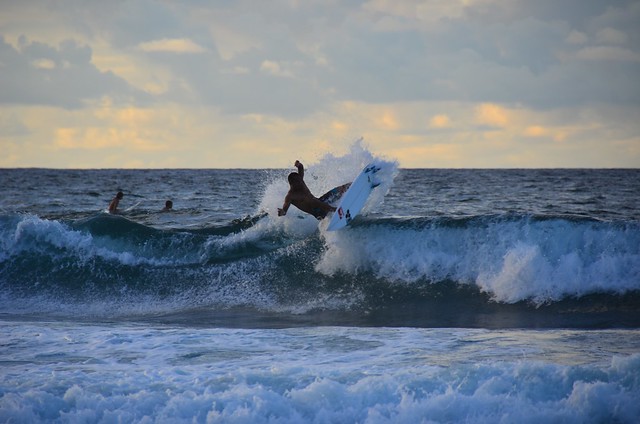