Lazy days in the Azores

The sunny island of Santa Maria is quiet and days there can be very uneventful. Which is kind of a good thing.

On Friday, the oddity of the day was meeting a guy from Brazil on Praia Formosa, and chatting with him a little bit in English, and a little bit in Russian. We distracted him enough that he missed the oncoming high tide and his bag got thoroughly soaked in sea water. 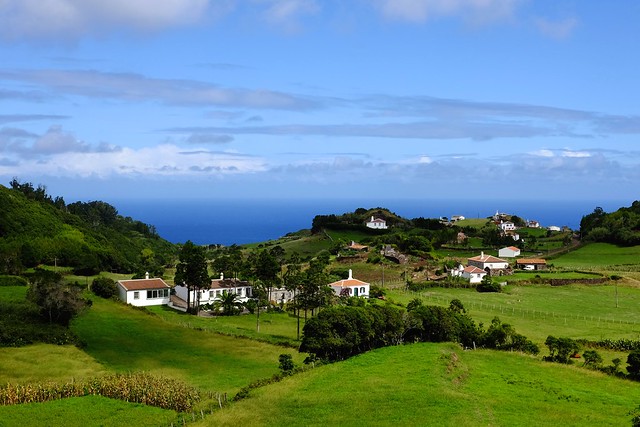 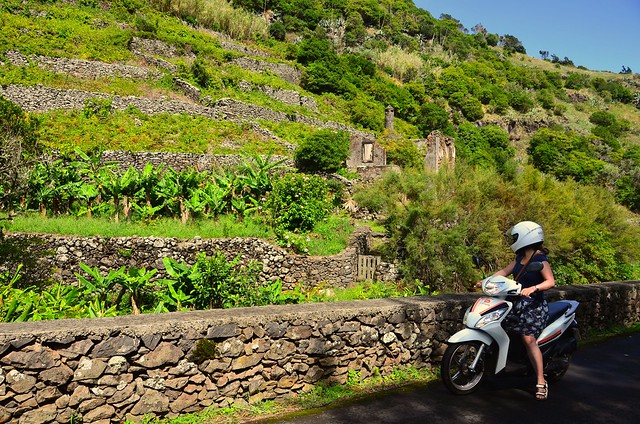 A banana grove along the road 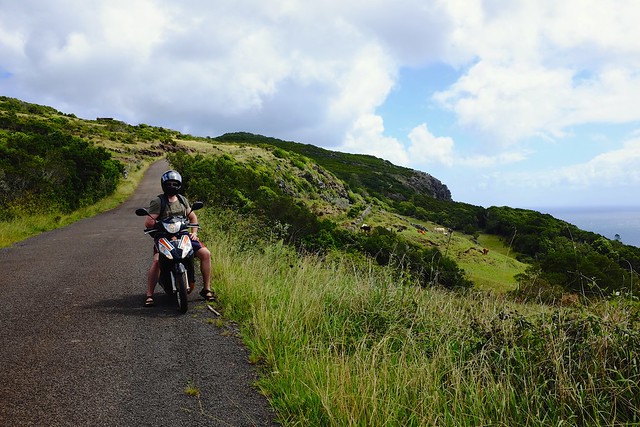 The only way it gets more like Santa Maria is by adding cows. 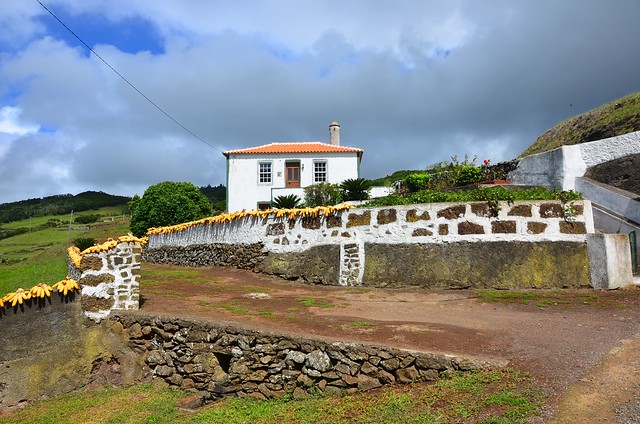 Corn drying in the sun on a quiet street. 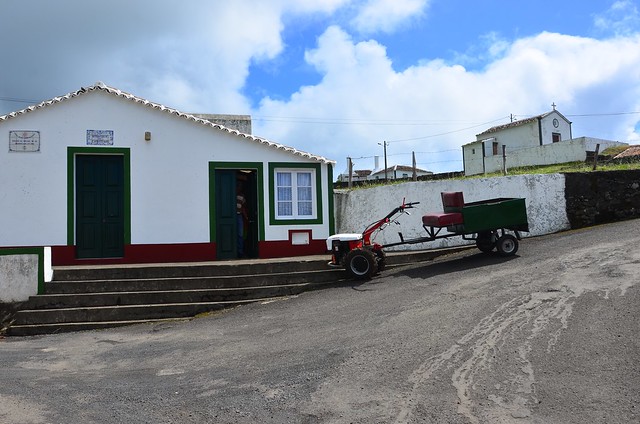 Sure it is road legal, but is it clean diesel? 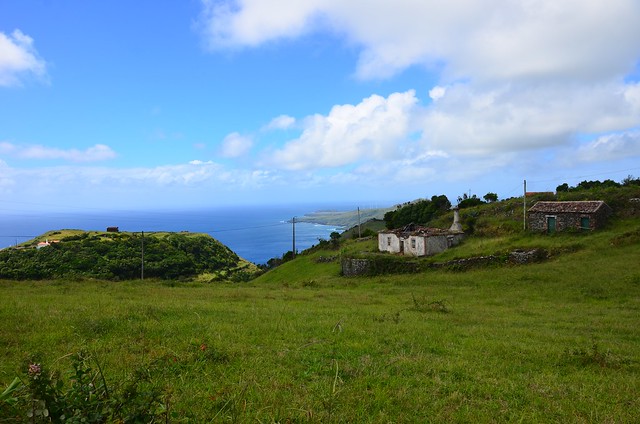 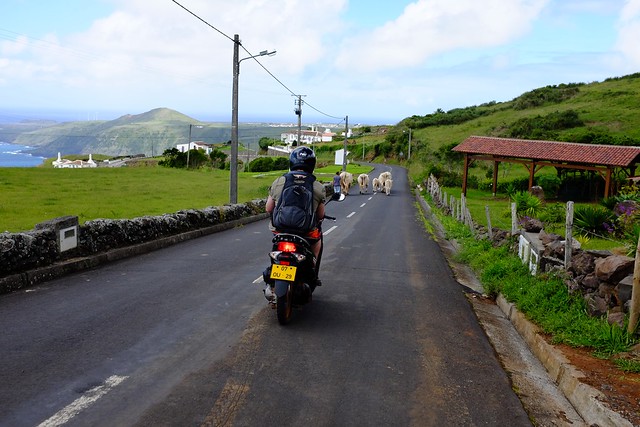 Close to Praia Formosa we encountered some traffic. 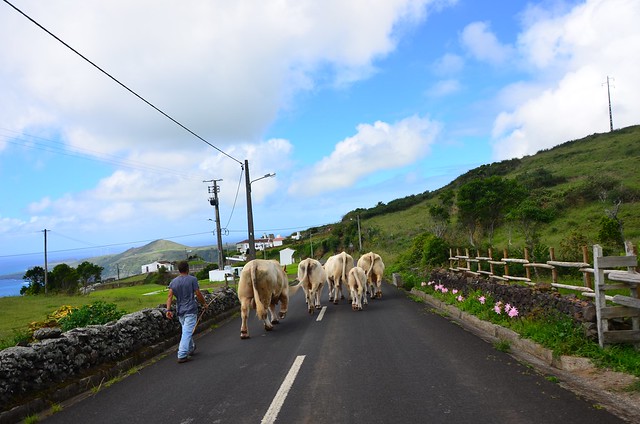 We did not ask if they were also going to the beach, but they probably did. 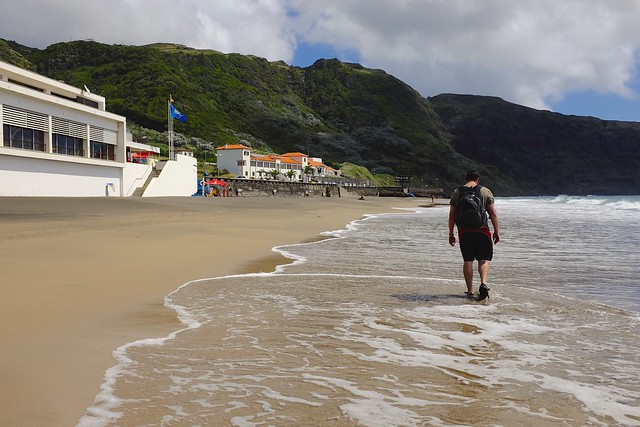 Praia Formosa: long and with impeccably soft sand. Caution: it gets mighty narrow at high tide.

On Saturday we were too lazy to go far in the morning, and enjoyed the beach in São Lourenço. This time the odd conversation of the day was almost non-verbal. A local winemaker, Antonio, was attempting to discuss life, universe and everything with us, despite his complete lack of English and our very very limited Portuguese. Some topics discussed included the number of his children and grandchildren, local air traffic, Azorean geology, winemaking and many other things. There was a lot of hand waving and a bit of wine tasting. 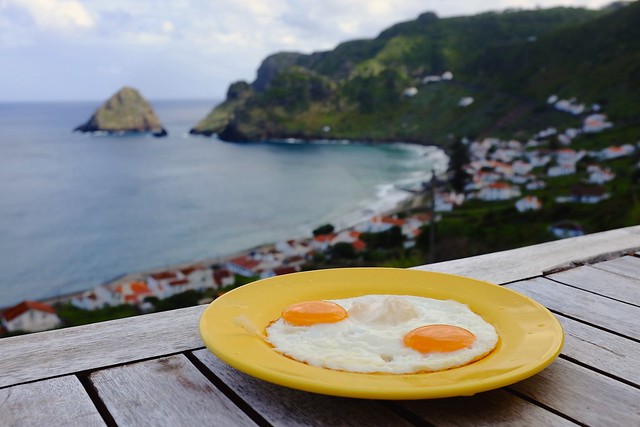 The only thing better than breakfast in bed is breakfast on the patio. 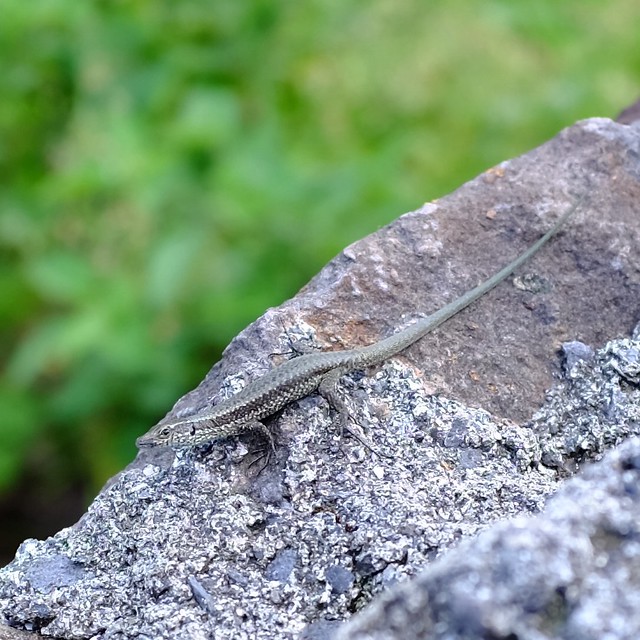 Lizards were about as common among the rocks of São Lourenço as squirrels are in Toronto. (Meaning very common.) 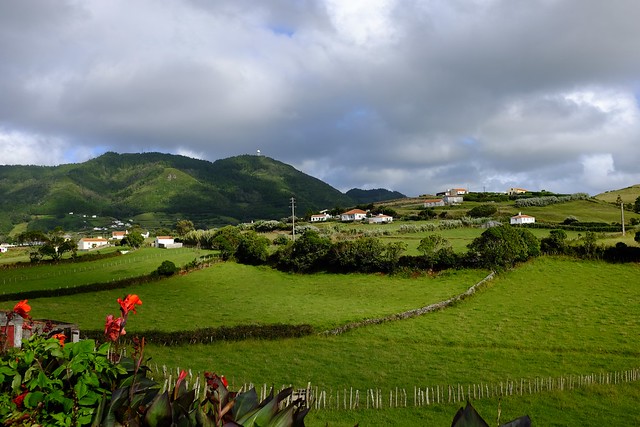 Later in the afternoon we went to explore the northeastern part of the island. Here we are overlooking Pico Alto from the village of São Pedro. 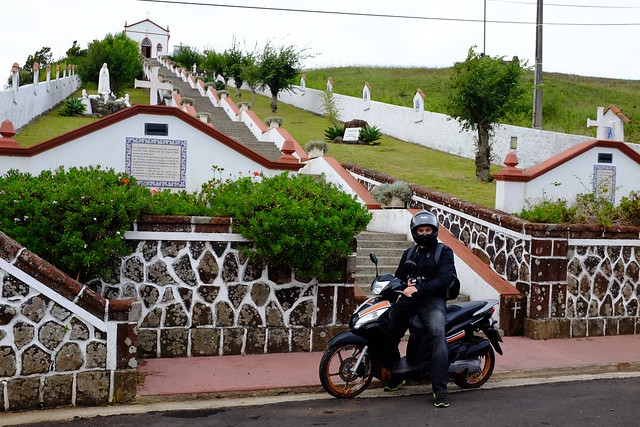 A somewhat common church design in the Azores features a long staircase. 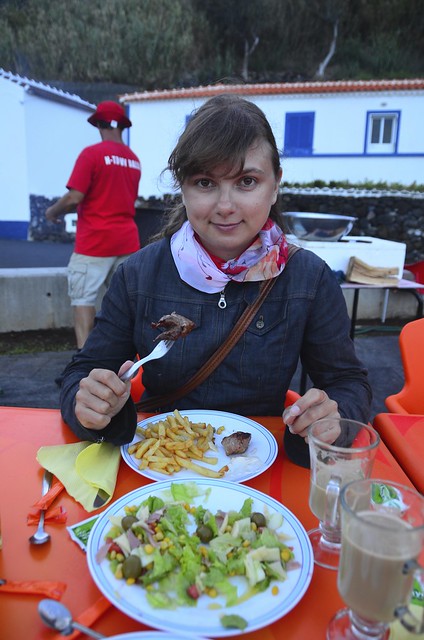 After a long time of riding around, including the nearby village of Santa Bárbara, we developed quite an appetite. To make going home easier, we went out for dinner right in São Lourenço. There are two restaurants in the village, one of them was open and served amazing pork kebabs, cooked outdoors over mouthwatering smoky wood by the dude in the red shirt.

On Sunday we had to leave São Lourenço but were set on juicing every last minute before our checkout at noon. We had guests: Antonio’s American cousin John and his girlfriend Lexi were exploring the surrounding hills and stopped for a chat on our patio. The day was colder than usual and neither of us were up for an ocean dip. We rode to Vila do Porto, passing through Santo Espírito and the twisty road overlooking Praia Formosa, finally settling at the old fort overlooking the pier, having a snack and basking in the sun. Eventually, we decided to go to our stop for the night, a room in a residential area near the airport. While we were getting acquainted with our host Pedro and the household’s extra friendly Shar Pei dog, the weather turned sour and it started to rain rather hard for the remainder of the day. To my disappointment I realized that summer was coming to an end in the Azores. 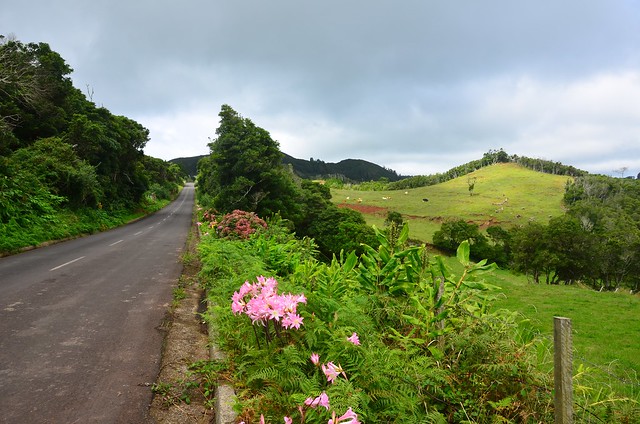 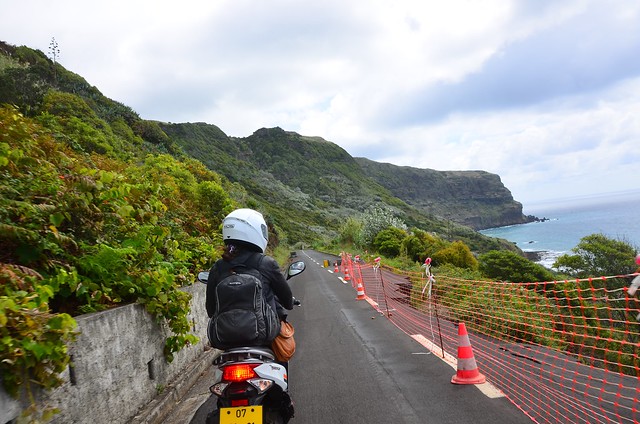 The road leading to Praia Formosa had some technical difficulties. 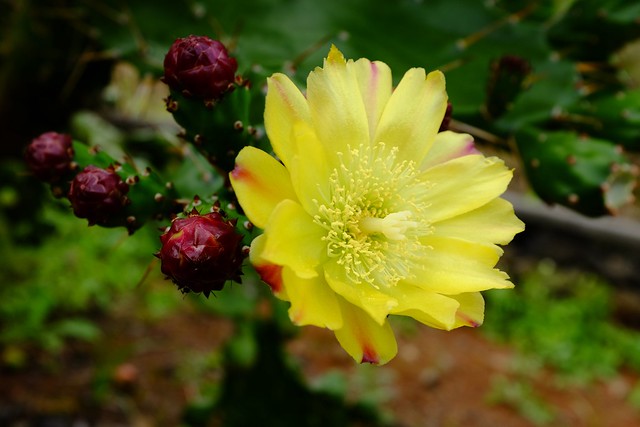 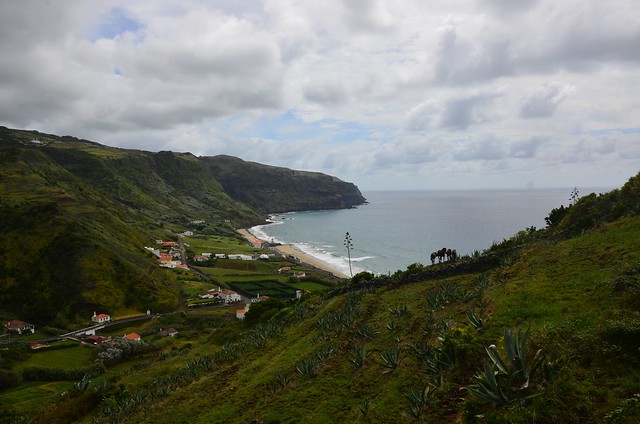 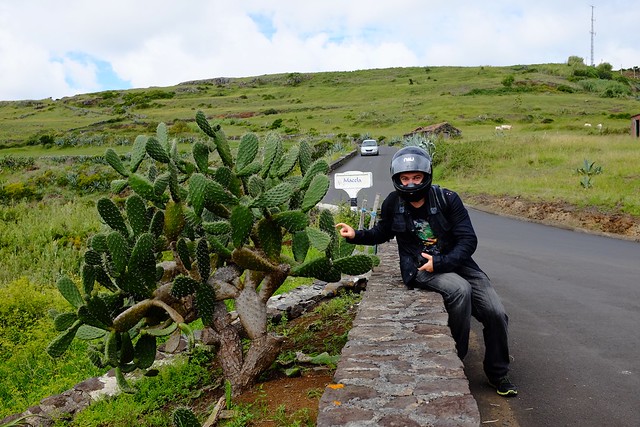 Cacti are actually not that abundant on Santa Maria, but there was a rather large group of them on the overlook in Macela. 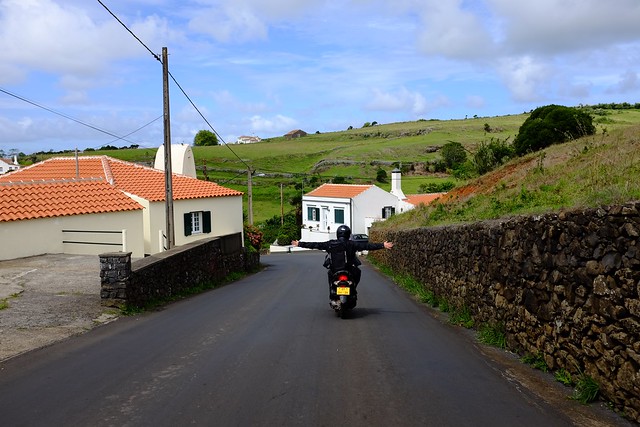 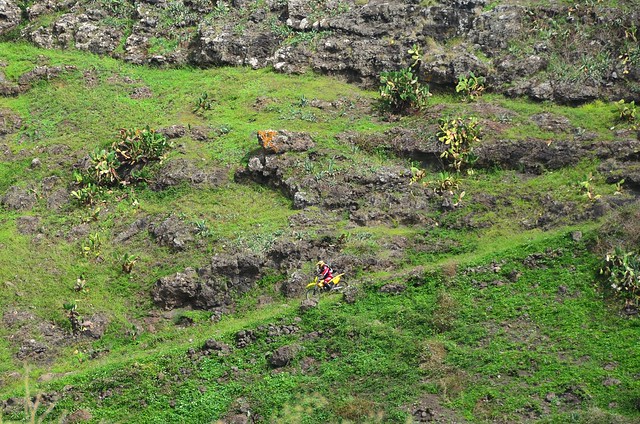 From the fort we spotted a lone dirt bike rider making his way down the green hills. 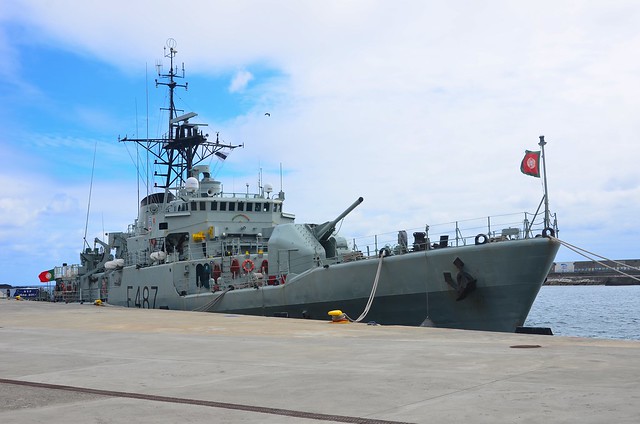 On Monday Pedro was awesome enough to wake up early and prepare a breakfast for us before our 7 am flight. Turns out he was an air traffic controller, and told us a little bit about things going on at the local airport. Although few planes land on Santa Maria, they still have to keep track of every one that passes by – which is every plane crossing the Atlantic between North America and Europe. In São Miguel we rented a car to be able to go out and have a little fun on the island before our afternoon flight home. I almost forgot my scarf in the restaurant in Salga, but we backtracked to get it back and still managed to be on time at the airport.

I generally feel that there are too many places in the world that need to be seen and explored, which makes it hard to justify visiting the same place twice. Yet I find my eyes lingering on that patch of green dots in the middle of the ocean when I look at the map in search of new targets. There are still 7 more islands in the archipelago that I have not seen! 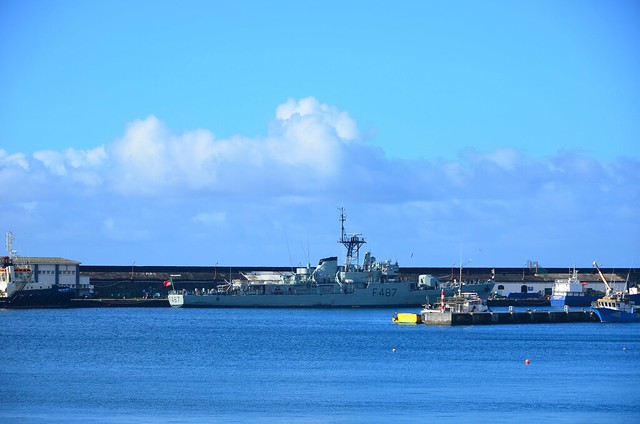 F487 followed us to Ponta Delgada. 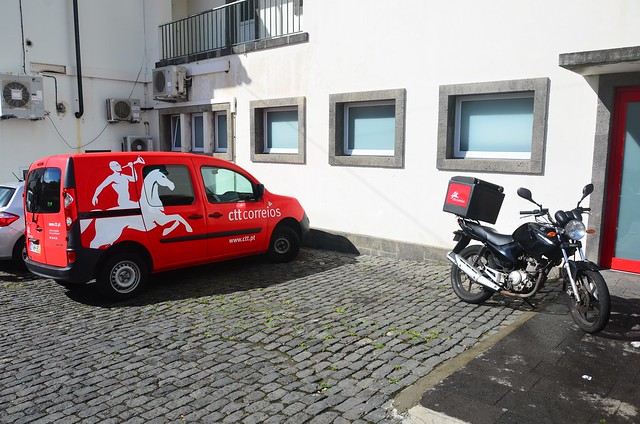 Portuguese postal service uses a variety of vehicles for the deliveries, although despite what their logo says, they don’t use horses. 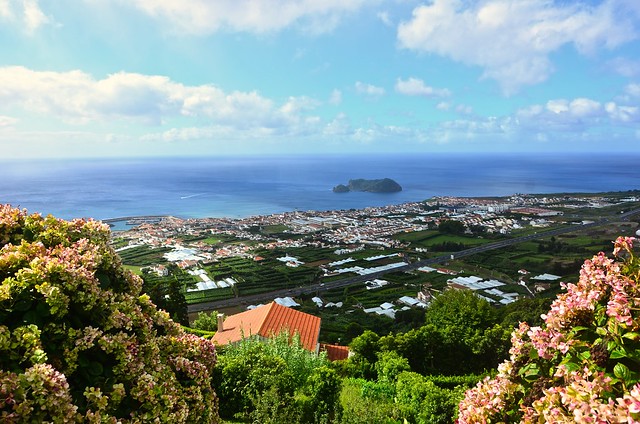 View of Vila Franca do Campo and its islet from the chapel of Nossa Senhora da Paz. 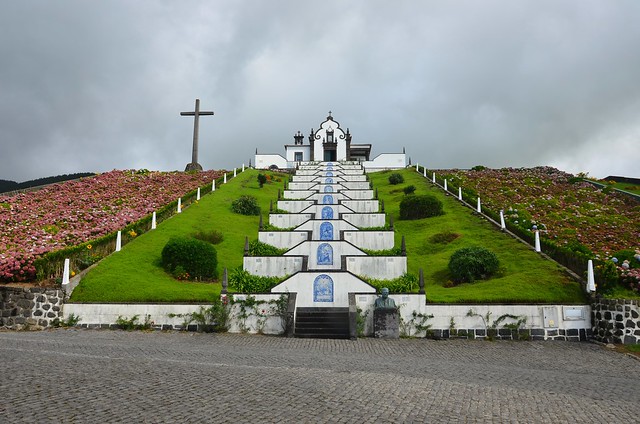 And the chapel of Nossa Senhora da Paz itself (Our Lady of Peace). 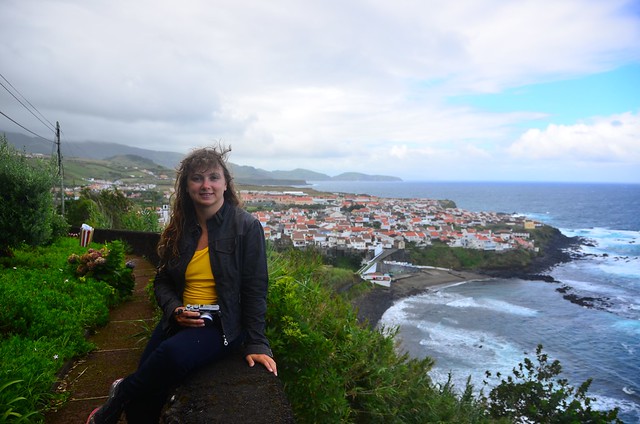