A Tasting of Santa Maria

We woke up in the dark at 5 am, had breakfast, and by 7 am found ourselves on a brand new island, just as the sun was rising somewhere behind an overcast sky. The flight from São Miguel to Santa Maria is barely 30 minutes, including taxiing on the runway. You are in and out before your body even fully wakes up. 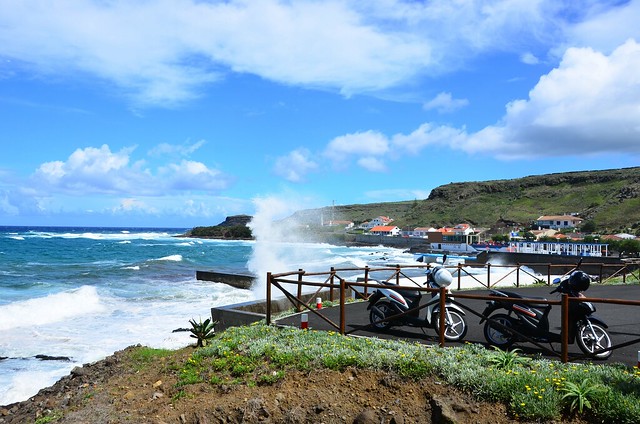 A coastal village on Santa Maria

To put it into perspective, I was so asleep, I didn’t even take my camera out until 10:30 am. By that time we managed to sleep walk through a ride from the airport to our guest house (complete with Azorean music on the radio), ride to main town Vila do Porto, and a walk back again to the airport to pick up scooters after our previous arrangements fell through. It was only 4 km, just a minor morning exercise. 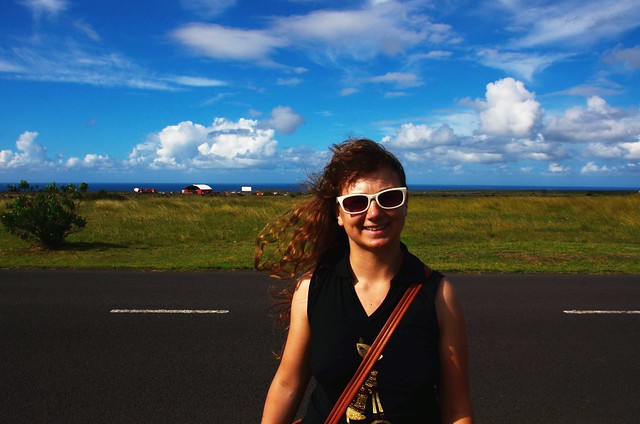 Walking to the airport!

Somewhere along that road (with a romantic name EN1-2A) Alex reminded me that we are actually in possession of some camera gear. That came in handy as we stumbled upon a few cats on the side of the road. One was sleeping in the sun, another was meowing and convinced us to share some of our food. You would not have such revelatory experiences riding in a cab. 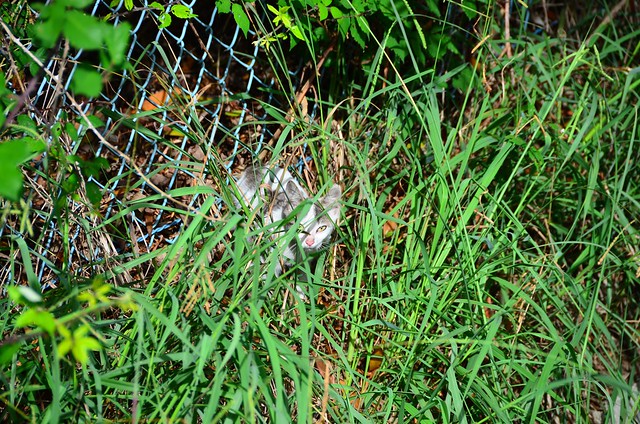 After picking up scooters and having our first cup of galão on Santa Maria, we started looking for a praia to dip in. São Miguel features dozens of options, Santa Maria – only a handful. We arranged our choices alphabetically and headed to Anjos. 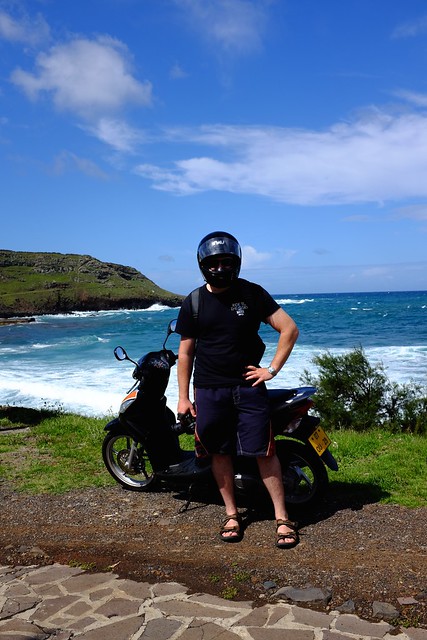 Brand new looking scooters with plenty of tread left, unlike the used and abused specimens the agency in Vila do Porto wanted to offload to us. 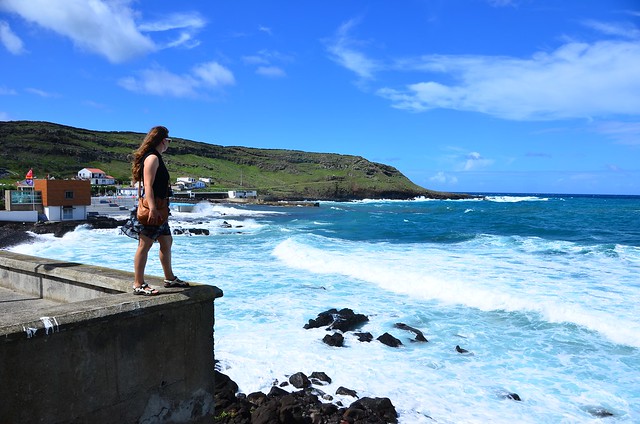 A beautiful ride, but the wind was so strong, it whipped up sea water into foam for at least 10-20 meters from the shore. The life guards were on duty, sipping coffee in a nearby cafe, but nobody dared go into the water. Not terribly disappointed, we just went on a hike around the shore along a rather well marked trail leading from Anjos into the unknown. 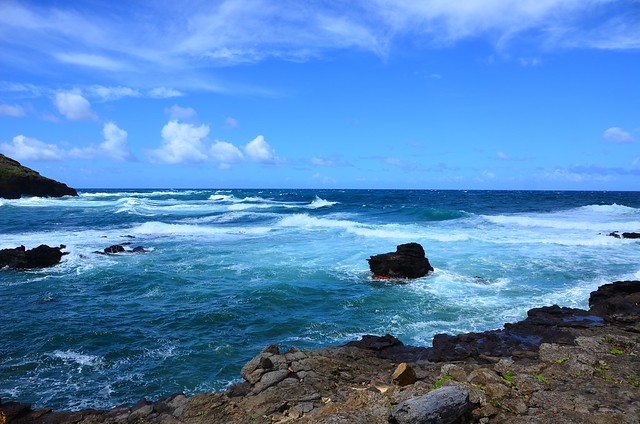 View from the Anjos hiking trail

The unknown exposed endless fields covered in grass, rocks of varying sizes and manure left behind by cows that were nowhere to be seen. The ocean kept roaring and the white crests of the waves were everywhere, from the shore all the way to the horizon. Their persistency was intoxicating, and at one point we just sat on the rocks and watched them, unable to take our eyes off. 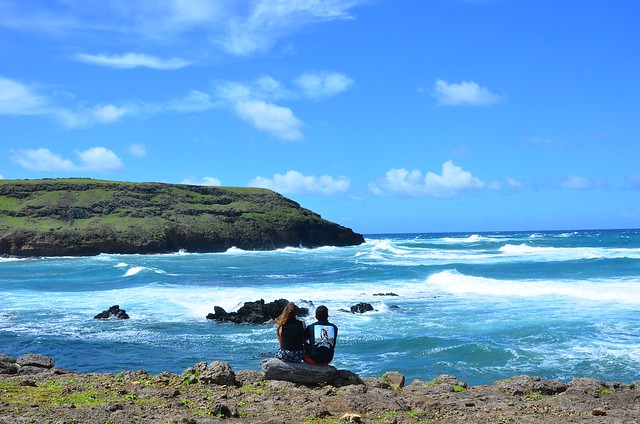 A violent kind of tranquility 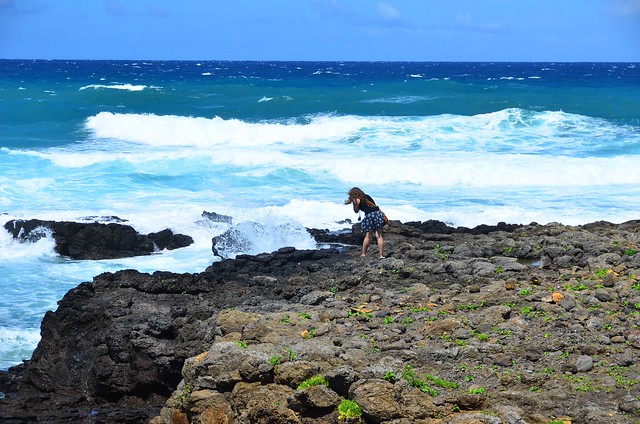 Taming the waves to fit into a frame. 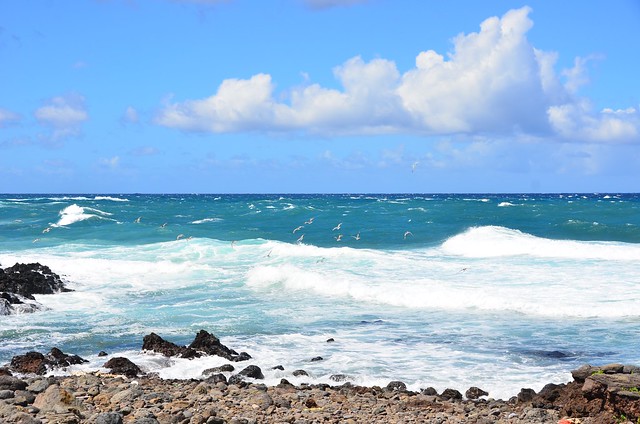 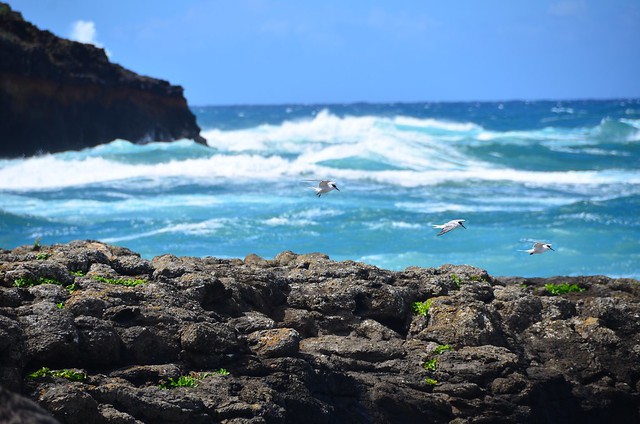 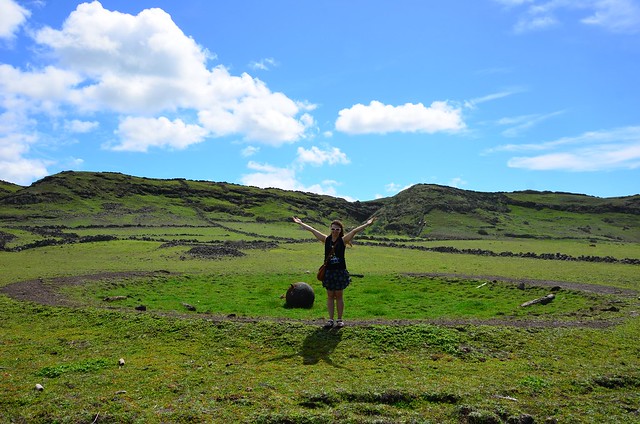 A site of a meteorite blast? A sacrificial circle?

All the fresh air made me hungry, and back in Anjos we stopped for lunch at the beach-side café, before going out for another ride. We went to Vila do Porto again, to make diving arrangements and pick up some produce in a supermarket. 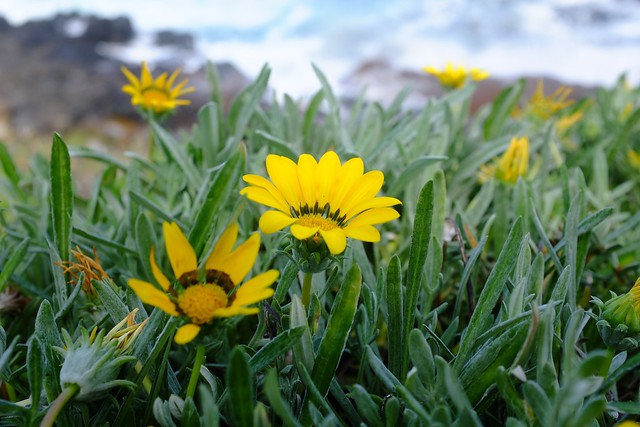 Flowers by the parking lot. 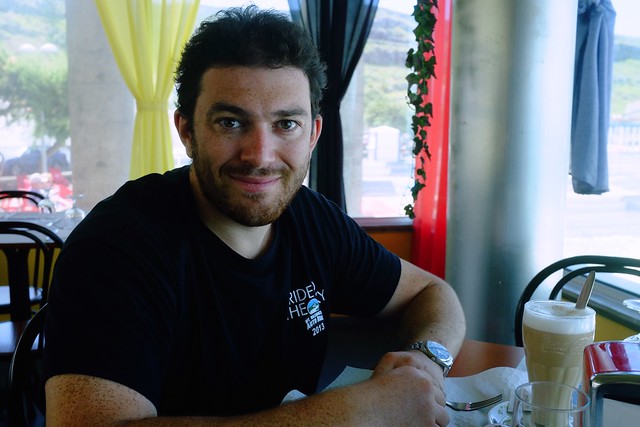 The road back to our guesthouse in São Lourenç0 is rather long and winding (by Azorean standards anyway), and full of amazing views of rural Santa Maria (which is the only kind there is). 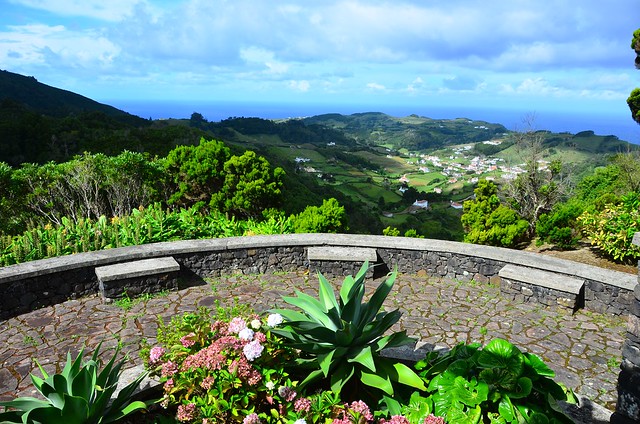 A miradouro looks out over a valley. 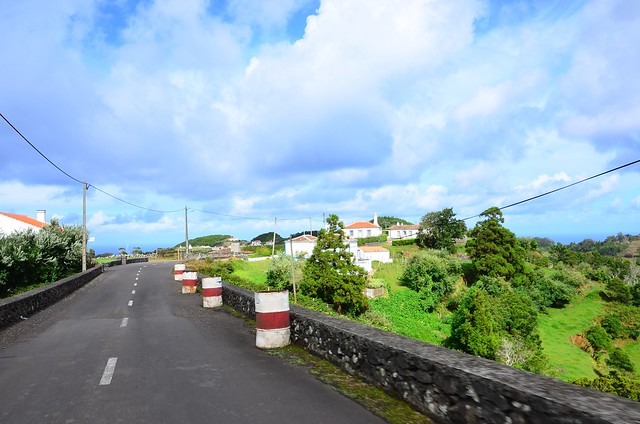 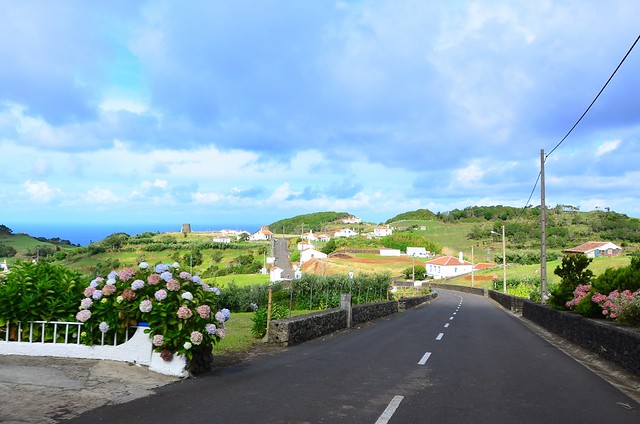 Flowers, green pastures and the occasional cows surround the road.

Curiously enough, our guesthouse is easy to spot on most postcards of Santa Maria, because the view surrounding it is just so iconic. As you approach the village of São Lourenço from the main road, you begin to understand why it’s so tempting to call it the most beautiful sight of all the island. The village sits at the bottom of a partially destroyed volcanic caldera, with vineyards and a few more houses climbing up the steep walls of that caldera. A sandy beach completes the idyllic location, with the bay offering some shelter and silencing the roaring ocean to a more tolerable level. 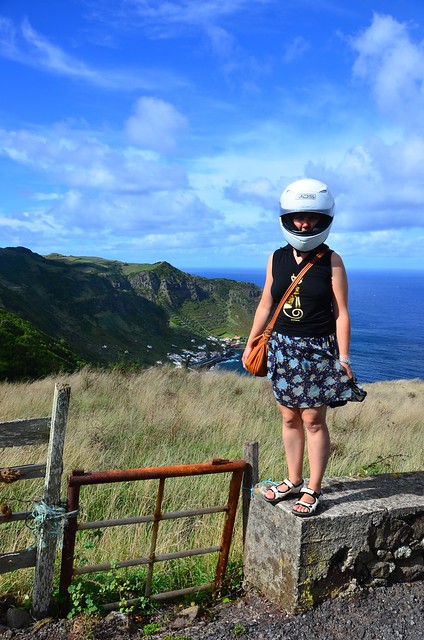 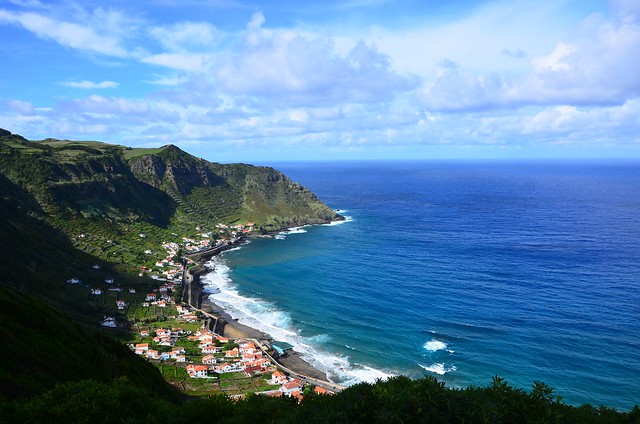 The village of São Lourenço

Tired after a long day, we took a nap, only to be awaken after sunset by something unusually bright outside our windows. See, São Lourenço faces squarely east. Our house is positioned not near the water, but on a hill. In fact, there is no house higher than ours in the village, so we get the most amazing view of the ocean, the beach and the village. It just so happened that it was almost full moon, and this celestial marvel was rising up and shining right at us, further magnified by its own glorious reflection in the calm waters of the bay. 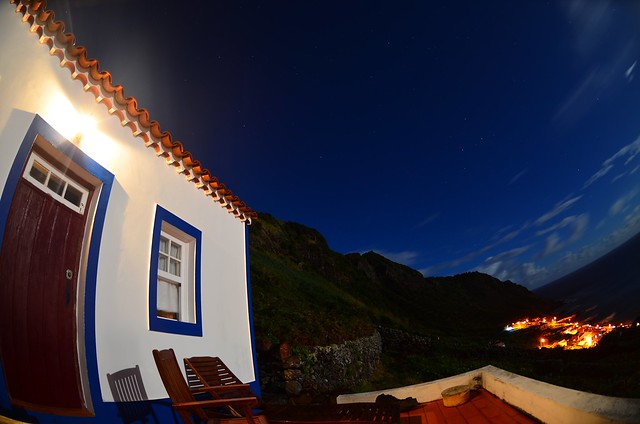 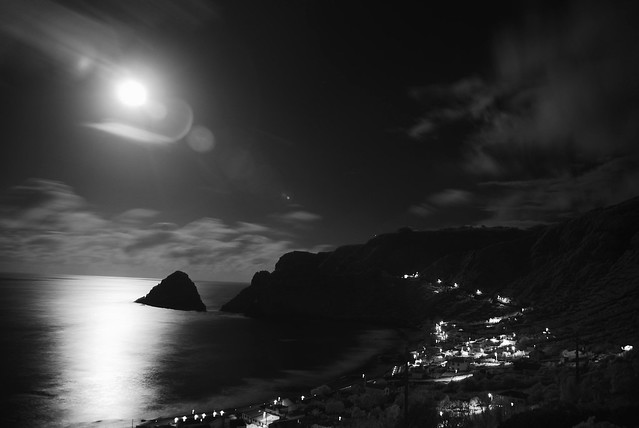 We were caught by surprise at this display, but it was now beyond certain – as far as locations to stay in, a new benchmark has been set. São Lourenço was winning.