The final leg of our trip was through Québec and around the Gaspésie peninsula. This province rarely disappoints me. 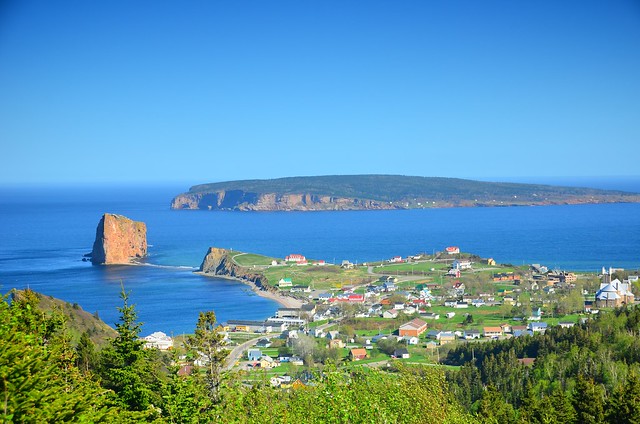 Since we were leaving Cape Breton, the weather decided to get better. This day would be spent primarily on the road, so it’s nice not having to ride through the gloomy coast for 12+ hours. The shortest distance between Baddeck and Percé is almost 1000 km, but we were determined to make it a bit more fun and skip the inland freeways in New Brunswick in favour of less direct coastal roads. To make it more likely, we were on the road before 8 am, which is frankly quite unusual.

The ride out of Nova Scotia was mostly uneventful, aside from a small bird that hit my helmet while trying to cross the road, and unfortunately, did not survive. It was aiming for Alex, but he ducked, and I was the slow one.

The first two thirds of the way were largely nothing to write home about, but things got a bit more curious as we were riding near the coastal town of Dalhousie, NB. 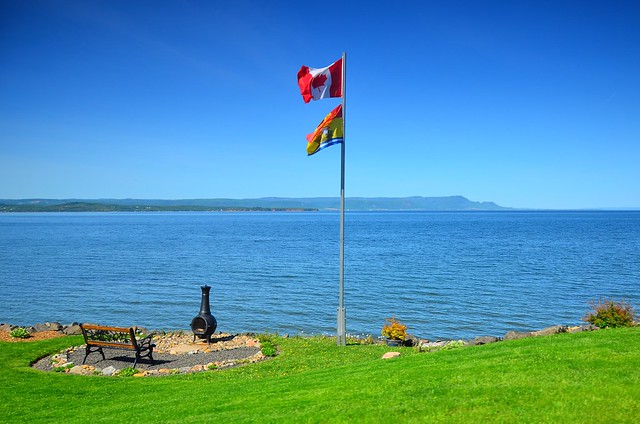 Somewhere in New Brunswick, overlooking the coast of Québec. 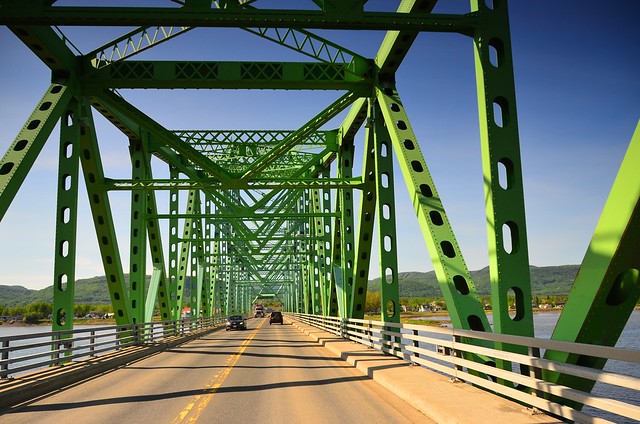 Bridge between Québec and New Brunswick

When we finally crossed into Québec, the towns became distinctly different. One of the things that’s easy to notice are the beautiful churches with their tall spires. Combine it with the St. Lawrence Gulf, the late afternoon sun, and it easily becomes one of the most joyful rides of the trip. The entire region is very relaxed and it looked like many towns were getting ready for the summer, with lots of outdoor spaces being prepared for the upcoming influx of vacationers from inner regions of the province. Lots of bed & breakfasts and summer festivals were advertised. 🙂 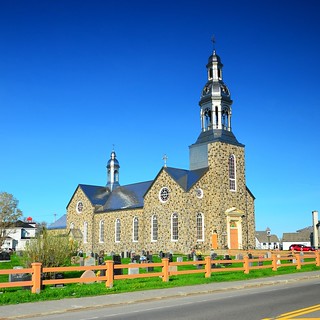 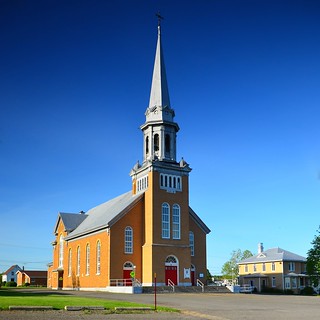 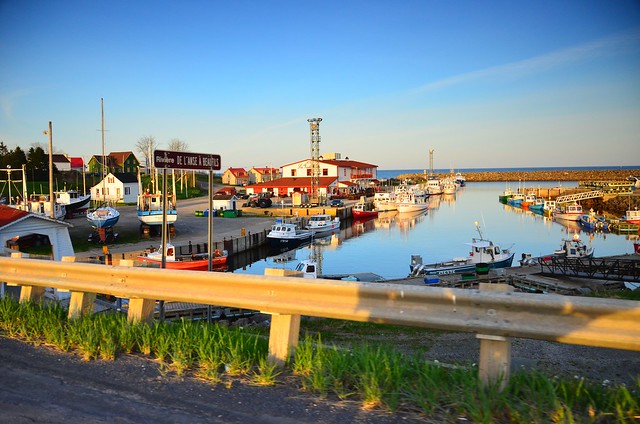 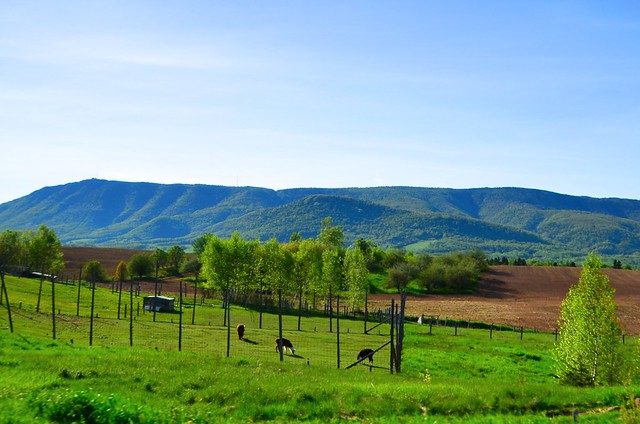 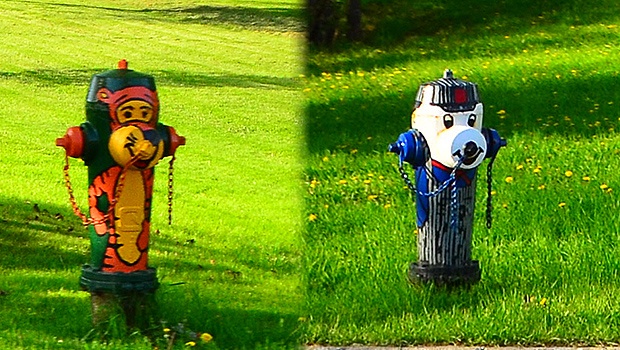 As the sun was about to disappear, we spotted the Percé rock off the coast ahead of us, and briefly stopped to admire it from the distance before continuing on. The town itself felt like the most developed of the bunch we have seen on this stretch of the road, and we were gleaming with anticipation of exploring it. 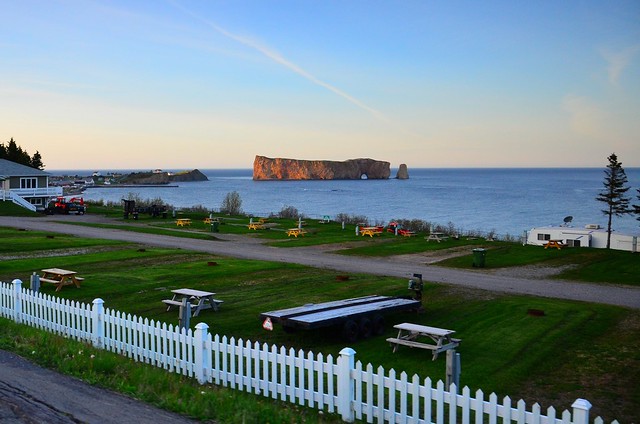 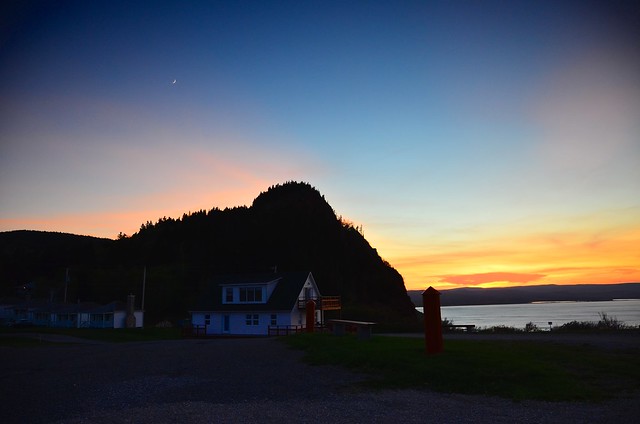 First things first, we needed to check in and get some rest. We booked a hotel at the top of the hill, overlooking the whole village, and the owner warned us about there being a slippery curb that might be tricky to cross on a motorcycle. The odd incline and the unusual material indeed proved a bit too tricky when entering at anything less than a complete 90º angle. The bike slid a bit and fell on its side, gently ejecting us in the process onto the ground. And that marked my first fall off a motorcycle 😉 . A car was travelling in the opposite direction on the main road, stopped, and the couple in it helped us put the bike the right side up again. We thanked them and finished off the last 50 meters to meet our host.

The main question we had for him was where to get something nice to eat. Naturally, it was past 8 o’clock, and just as naturally, it was not a problem, as we were in Québec! Aside from being a minor tourist attraction, Percé is a fishing village, and the seafood of choice here is lobster. At the bottom of the hill we just climbed, there was a small local bar which ostensibly was the best place to sample a lobster.

Back on our bike, and within just a couple of minutes we were sitting at the bar and waiting for our freshly cooked crustaceans. The bartender showed us the green live lobsters in an empty pot, and waited a bit for approval as a waiter might do with a bottle of wine before uncorking it. Puzzled for a moment, we nodded and our lobsters returned in a little while, now red, served with clamato and fried potatoes. They looked tempting, but truth be told, it was the first time either of us encountered a whole lobster. Alex was obviously too self-sufficient to ask for directions, so it was me who had to compose a look of mild perplexity and ask for detailed instructions from the friendly bartender. As I suspected, this animal is eaten in its entirety, except for the shell.

After almost a week of bad luck getting any upscale seafood in Alma and Cape Breton, we finally got it: the sweet and savoury, perfectly delicious buttered lobster! 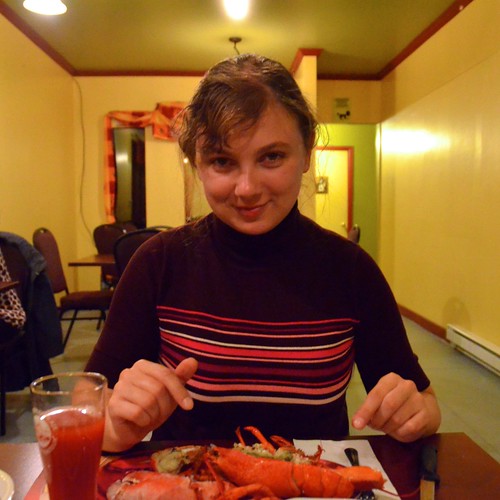 No beer, because somebody had to navigate that treacherous hotel entrance on the bike again (worked better this time).

In an unexpected twist of events, this day we would not be doing a whole lot of riding. After a leisurely breakfast at the hotel, looking over the sparkling water of the gulf and the town below us, we chatted with our host and at his suggestion went to the village to go for a boat tour around the Rock and the Bonaventure Island. 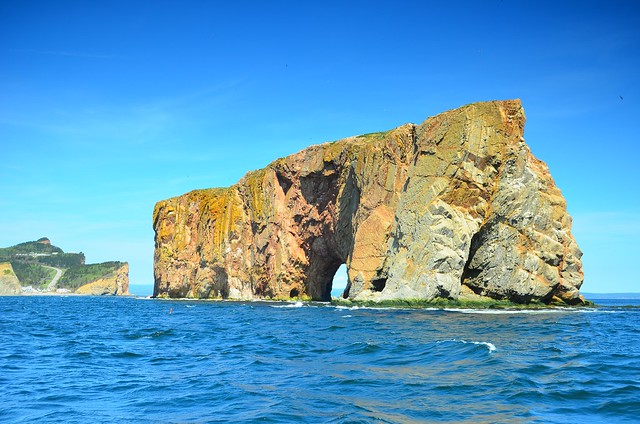 The Percé Rock with the town in the background

There are many boat tours running in this area in the summer, but this early in the season the choices are limited. Some of the things we couldn’t do at this time were whale watching, tours of the lobster fishing grounds, or actually landing on the Bonaventure Island. But even just circling the Percé rock and the larger island (which is designated as a national park), is quite fun. There are innumerable sea birds flying everywhere, and at this time of the year many are busy making nests and preparing for the arrival of their chicks. 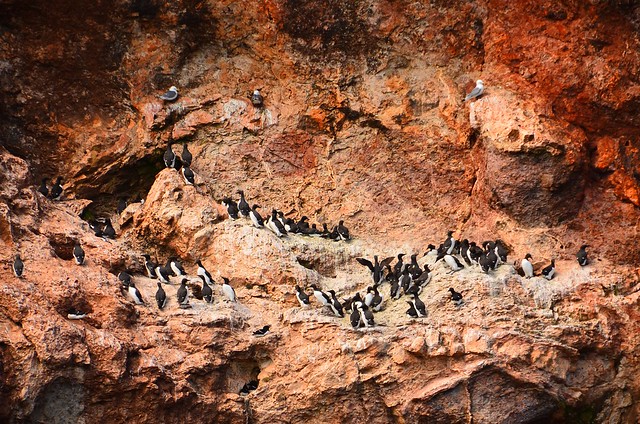 The birds of Bonaventure Island 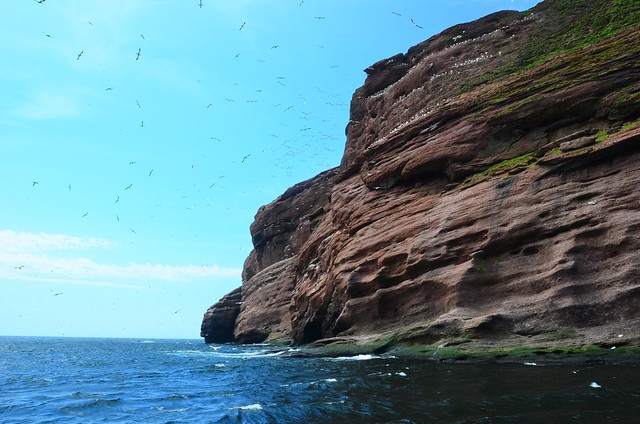 Thousands of Northern Gannets in the air 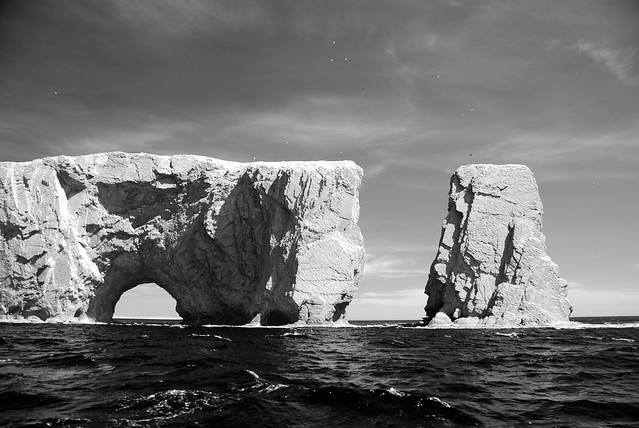 When we got to the far side of the Bonaventure Island we were surprised to see lots of seals lounging in the shallow water. Unlike the busy birds, these mammals seemed to be spending their days rather lazily, resembling sleepy cats, except less furry. Some were in the water, but looked like they were playing rather than fishing. 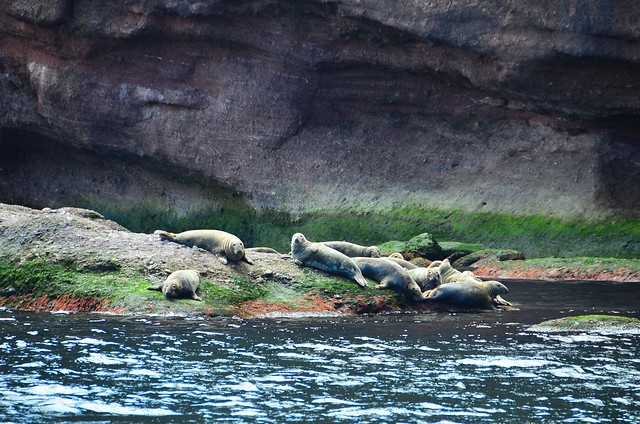 The sight of countless birds in the air, and lots more on the cliffs was awe inspiring. The largest and most notable of them are the northern gannets, but many others were there as well. Some of them looked a bit like penguins, but were perfectly capable of flying. Later in the summer this boat would have stopped on the island to allow people to hike in the park and see the gannets up close (like we did a year later in July), but not today.

We got some lunch near the pier, and after thinking about what to do next, we did what seemed most logical: another go of the same boat tour. The sun was higher and warmer, and by the end of it I had a legitimate sunburn on my face. 🙂 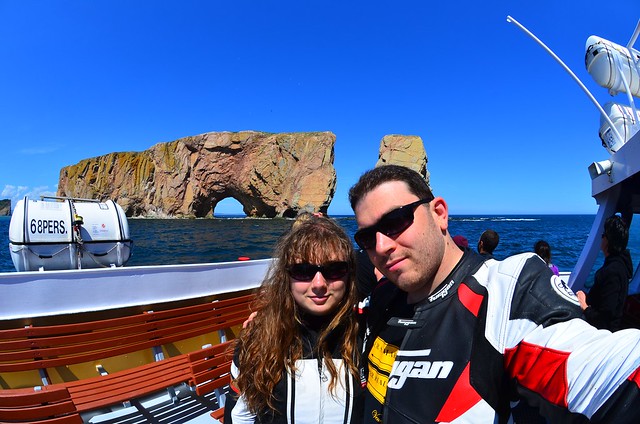 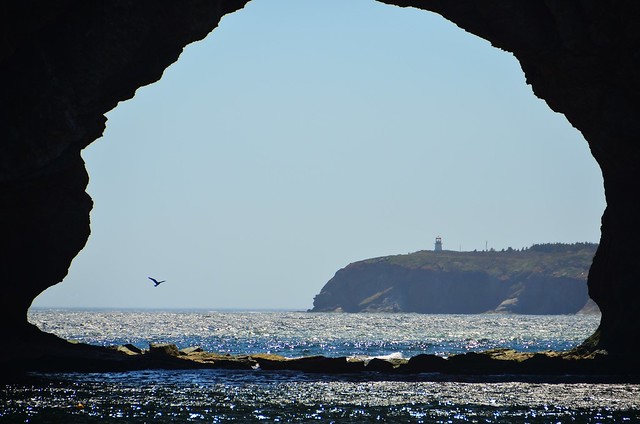 Lighthouse through the hole in the rock 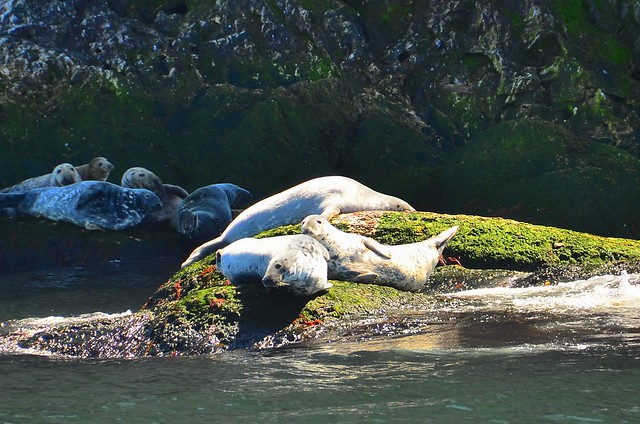 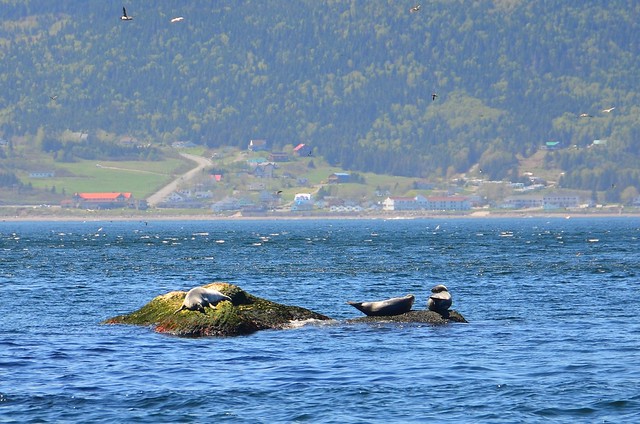 Seals with the village of Percé in the background 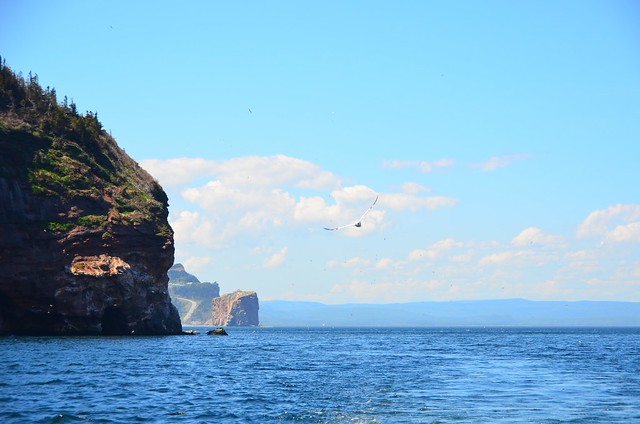 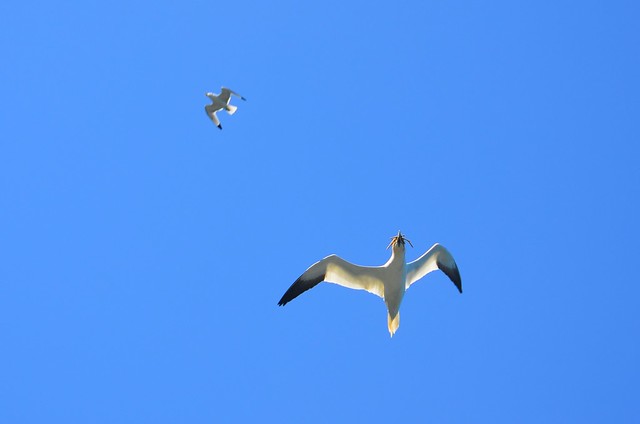 The gannet with some building supplies 😉 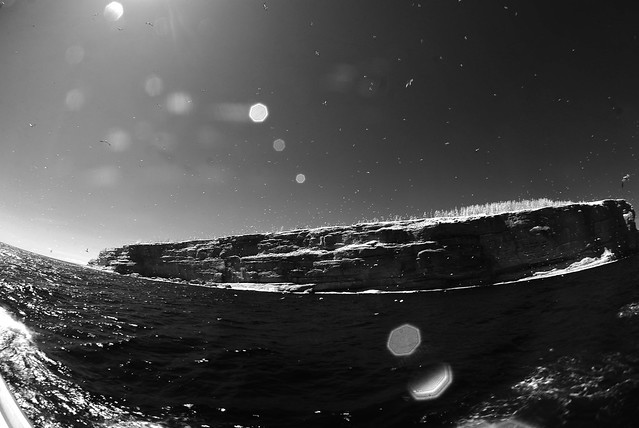 There is a lot to tempt your wallet with in Percé: the crafts, the food, art pieces, and there is also a tiny beach where one can relax and listen to the waves in peace. I chose to stick around the beach for a while, just soaking up the sun, the sound of the waves, and the seagulls yelling in the background. 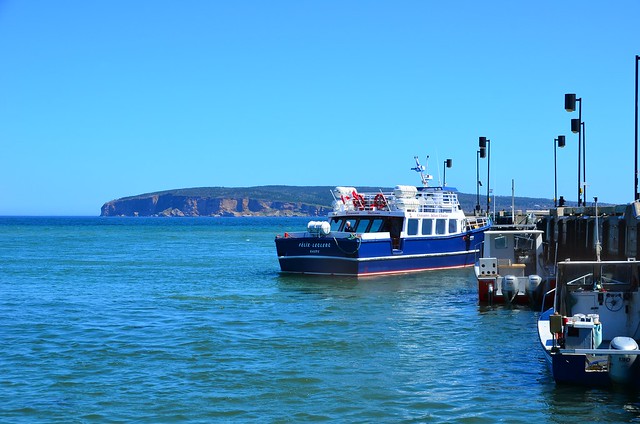 Late in the afternoon it got colder and we decided to head back to our hotel to enjoy the view of the village with some hot tea. The contrast of the cooler outside air on the flushed sunburnt skin was a rare pleasure. We set up the camera on the balcony to take time lapses. As far as hotel rooms with a view go, this definitely ranks in my top 5 (Bellagio on Lake Como is on that list, too). 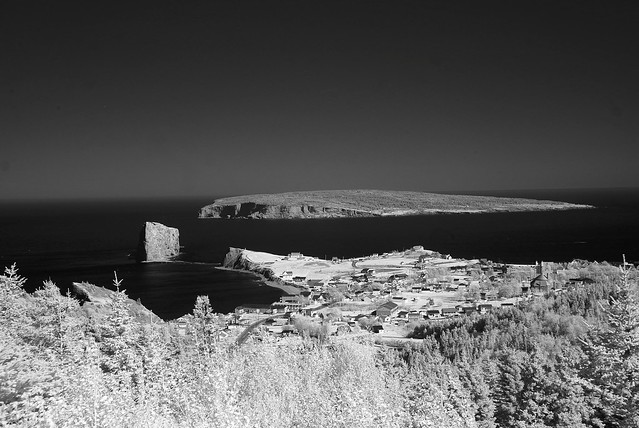 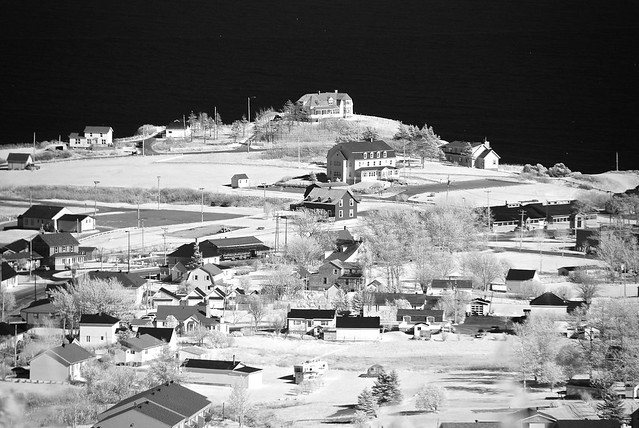 The snow white grass and ink black water of the gulf: infrared at its most surreal. 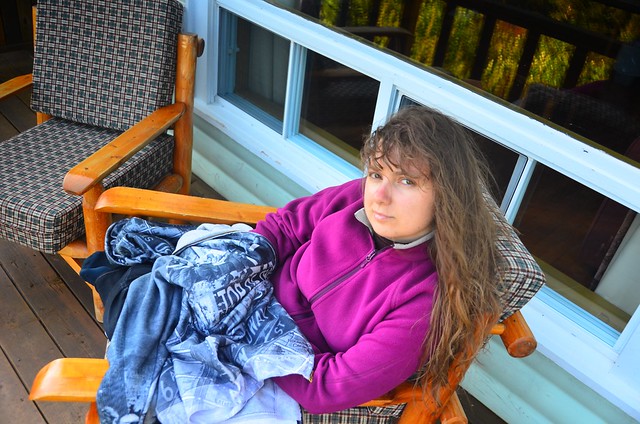