There is a certain kind of laziness to Santa Maria that is contagious. Sleep in, have a really long breakfast, look at the ocean, go down to the beach, ponder about life, the universe, and everything…

There is a temptation to just stay put and enjoy the view, because you’ll be hard pressed to find a better one. There is also a suspicion that there are other interesting things to see, and new is always better, and when you have a scooter, everything looks like a road. So as a compromise, we wake up at sunrise to watch it happen, then continue sleeping a little longer and take off in a randomly selected direction with the hope of making it back in time to watch the fabulous moonrise again. 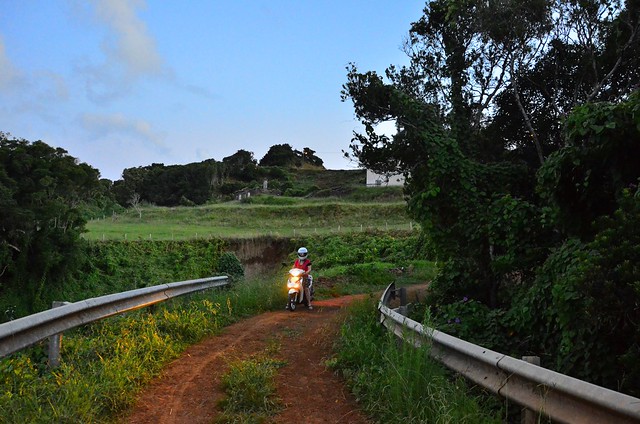 We are running out of light just as the road begins to look interesting.

Instead of trying to stitch a coherent story out of the next two days, I’ll leave it as a semi chronological set of photos. 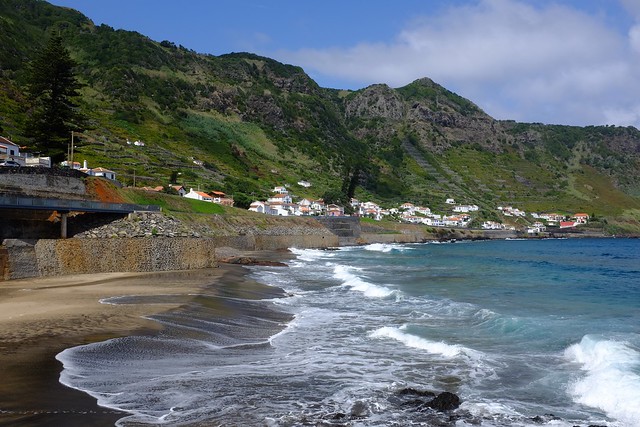 Shot while having my feet tickled by the waves.

Overlooking Praia Formosa and the surrounding hills and valleys. 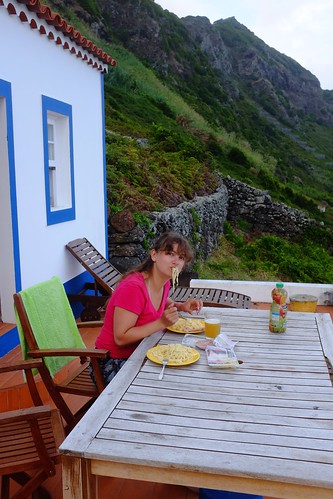 After dipping in the ocean, it’s good to have dinner while looking at the ocean. 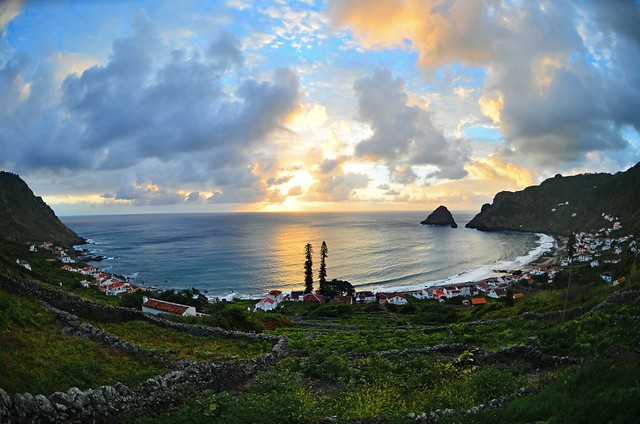 There are other reasons to wake up at 7 am aside from having to go to work. 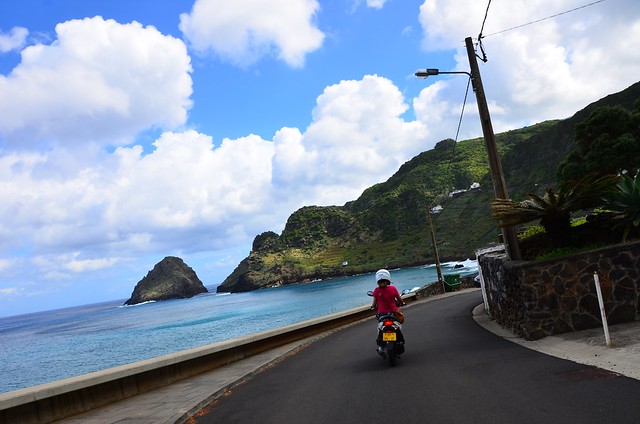 Riding along the aquamarine coast. 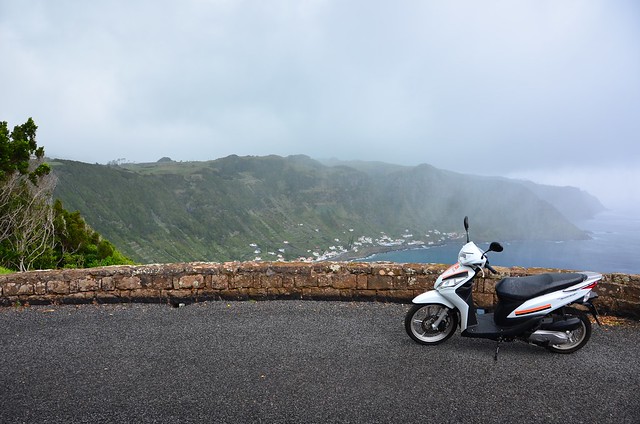 Rain comes and goes quickly when you’re in the middle of the ocean. At least São Lourenço vineyards are getting some nourishment. 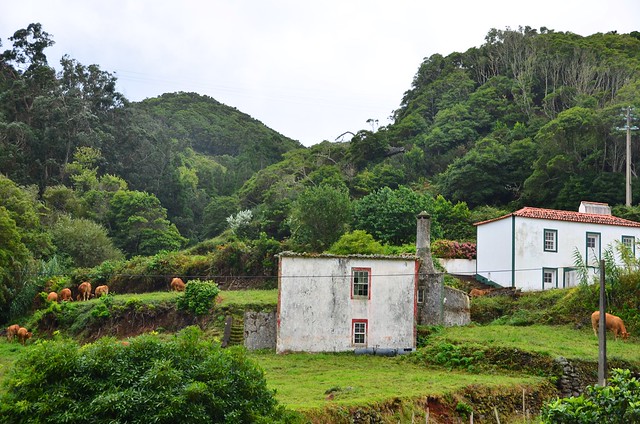 The cows in Azores have to be good climbers. 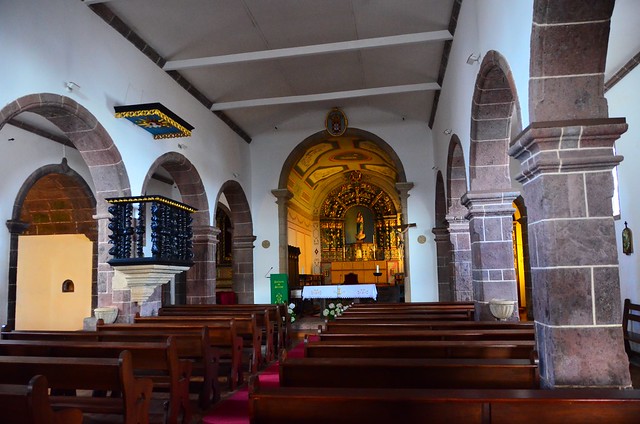 In Santo Espírito church you can find peace and tranquility on any day but Sunday. 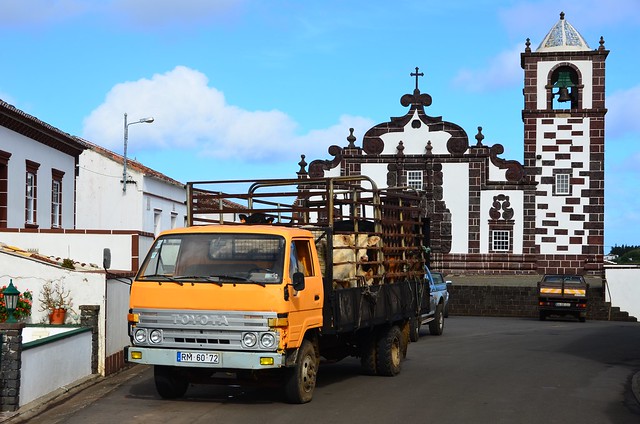 The cows have come to confess their sins, while the farmers are in the bar across the street. 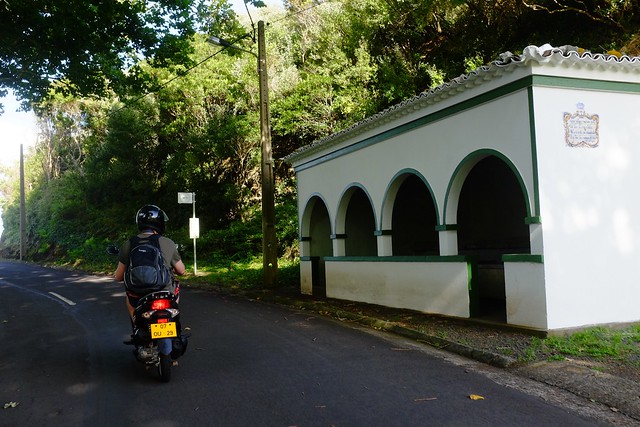 Tell me, where else in the world do you have a built solid enough and spacious enough that you can live in it? That includes your grandparents and that cousin you always avoid. 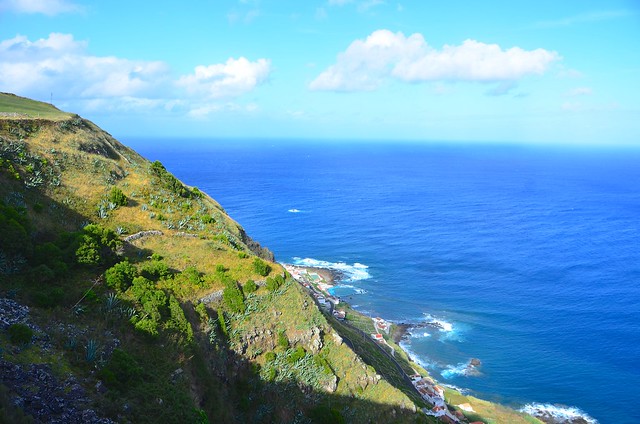 Parish of Maia sitting on a narrow slit of land between the cliffs and the ocean. 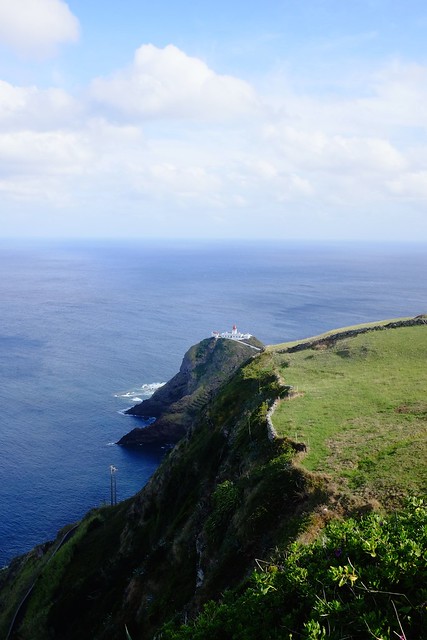 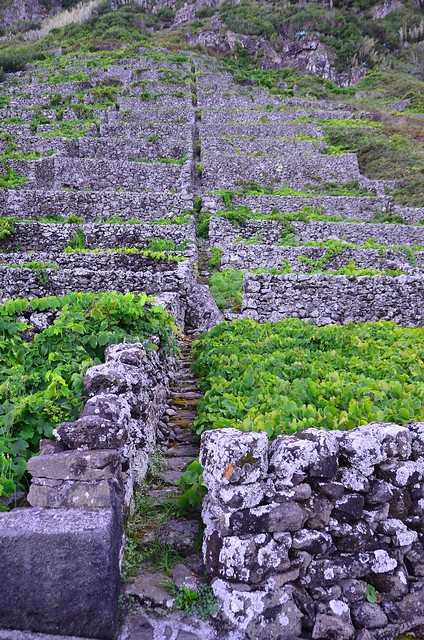 Vineyards in Maia. The narrow pathway is the only way to get to each of the steep sections to care for and harvest the grapes. The yield is generally too small for commercial sale, but provides enough wine for in house consumption of the few families that own the land. 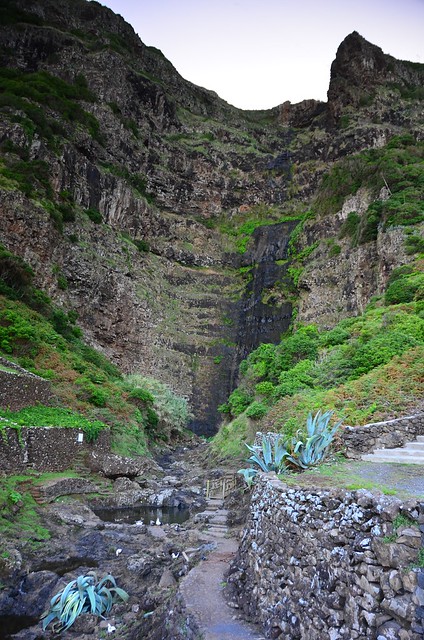 Cascata do Aveiro – an 80 m tall waterfall at the edge of the parish of Maia. 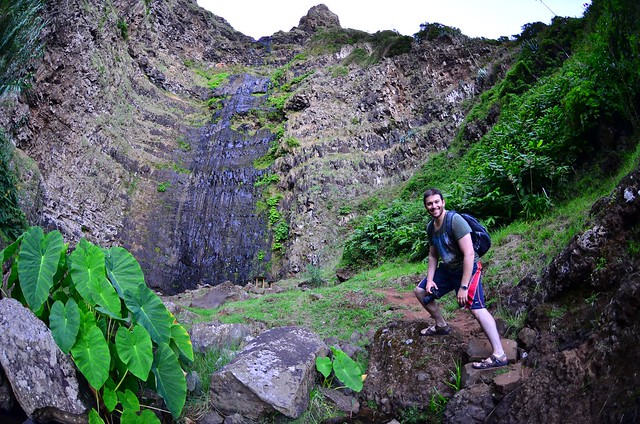 Since the rainy season had not yet started the amount of water was fairly small, which allows you to get really close to the falls – without getting sprayed as you would near Niagara Falls (which stands at only 57 m tall). Up close the waterfall seems monumental. It’s very serene and quiet, and conducive to existential pondering. 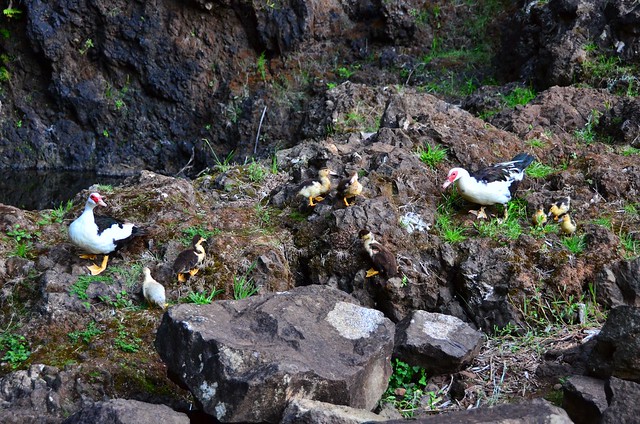 The falls creates a series of freshwater ponds as it makes its way to the ocean, which are home to a large number of ducks. 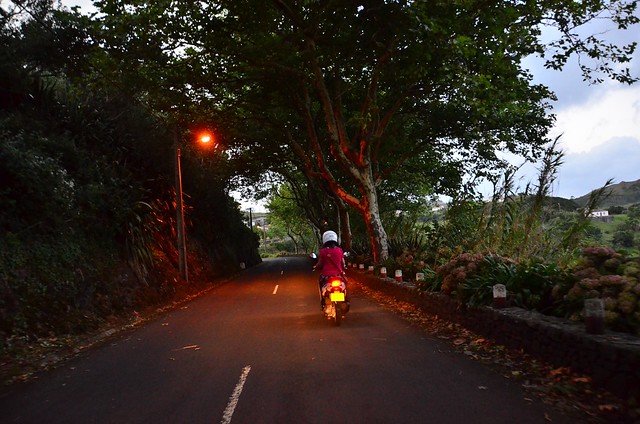 Riding back home in the quickly disappearing evening light. 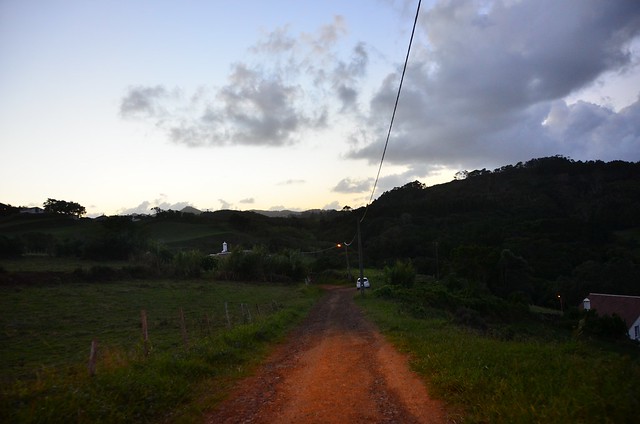 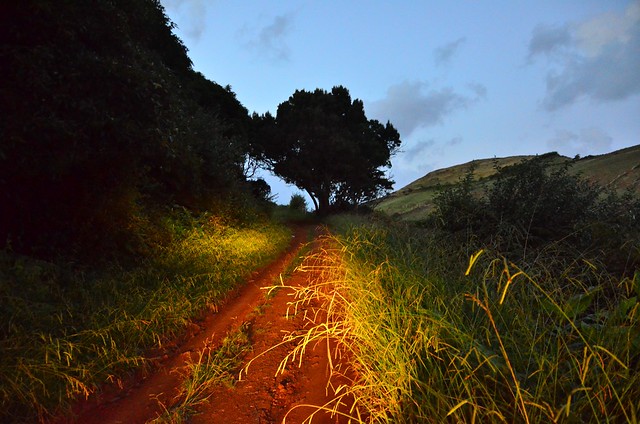 The orange dirt road of Santa Maria. No bugs. Bliss. 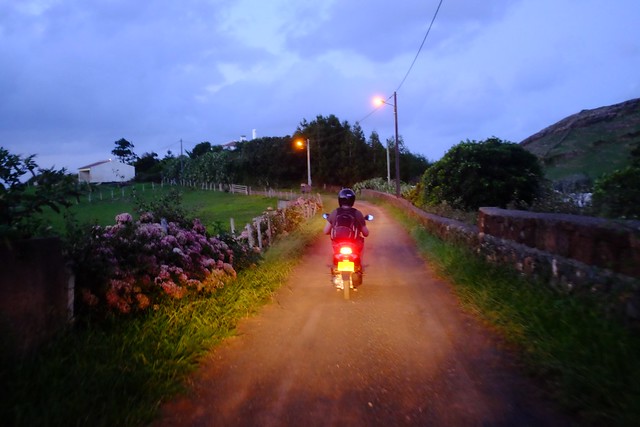 Paved or unpaved, roads in Azores are always lined with flowers. 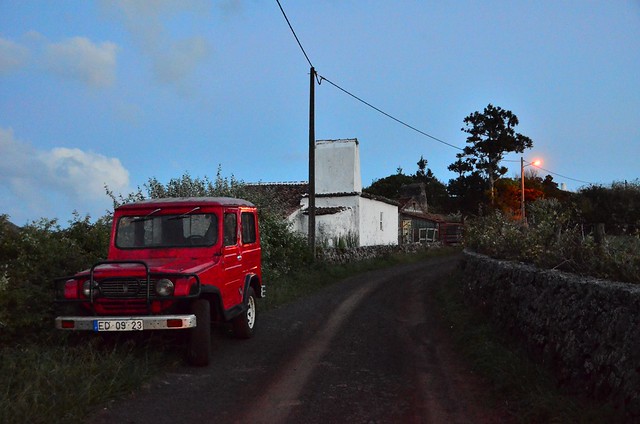 Red ones are always faster. 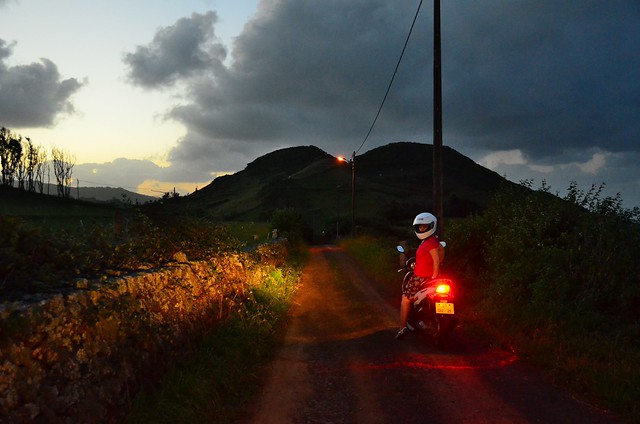 It was officially past nightfall when we got back. 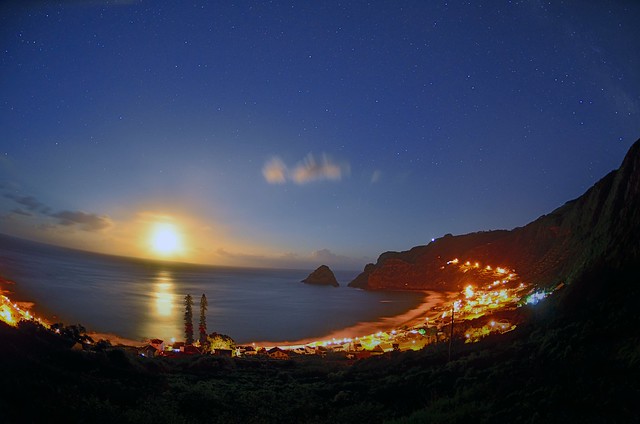 The icing on the day’s cake: moon rising in the starry sky over the bay, with the lively village shining almost as bright along the shore.