Diving and breathing in São Miguel

After a couple of days of additional preparation we decided to do a few more dives in the vicinity of Ponta Delgada. There are certainly more spots in the Azores for interesting diving, but in retrospect, it would take a bit more experience and a bit more dive-centric planning to fully take advantage of them. So off we went for some more quality time with Bruno and Suzi from Best Spot Azores. 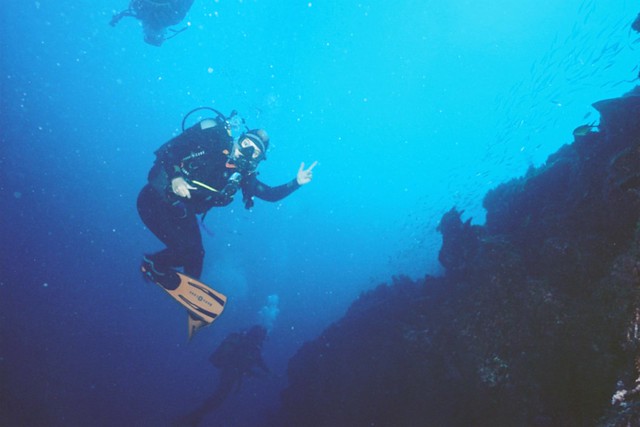 Check out all the fish!

The first Friday dive was at a spot known locally as Viteleiro – something to do with veal, clearly. The reef in this location was created by the flow of volcanic lava. It left intricate channels as it moved and cooled off, which are now inhabited by countless sea urchins, stars, rock fish and plants.

One of the coolest things about diving in the Azores are the larger pelagic fish swimming about in mid water. A sizeable school of them can come seemingly out of nowhere, and the shining silver reflections they cast are mesmerizing. They could be tiny anchovies or huge barracudas, either way the effect is almost surreal the first few (hundred) times you encounter it. 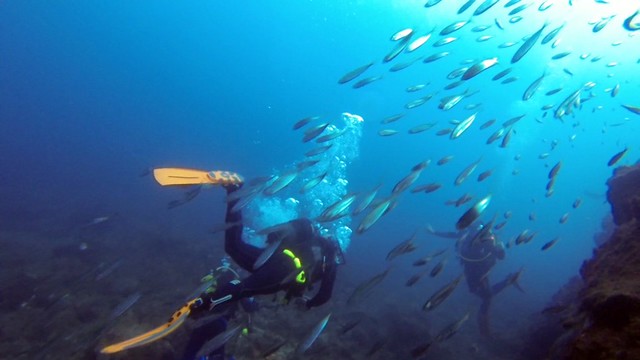 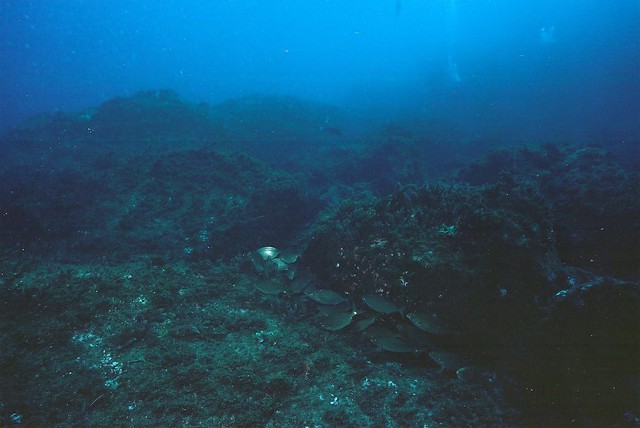 Volcanic rocks are full of life

For the second dive, we returned to the Dori wreck for another serving of this curious ship. The visibility was even better than last time, and it was a great dive. Spotted some octopus, a stingray, anchovies and other usual suspects. 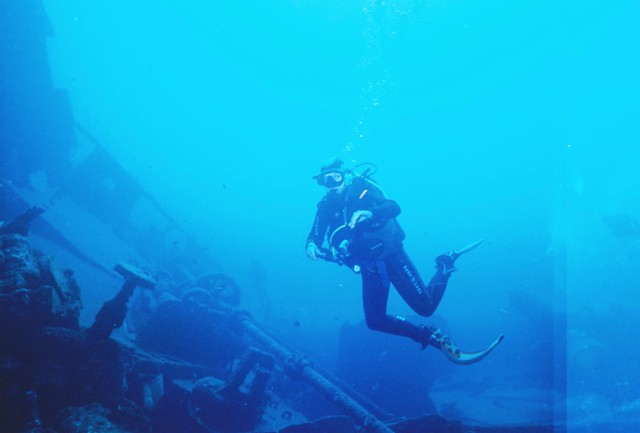 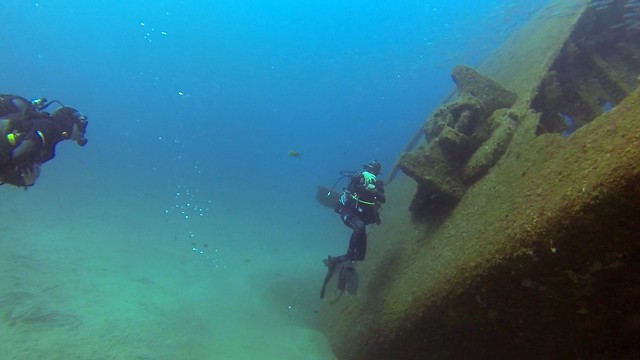 Bruno explaining how the anchor works at the Dori wreck 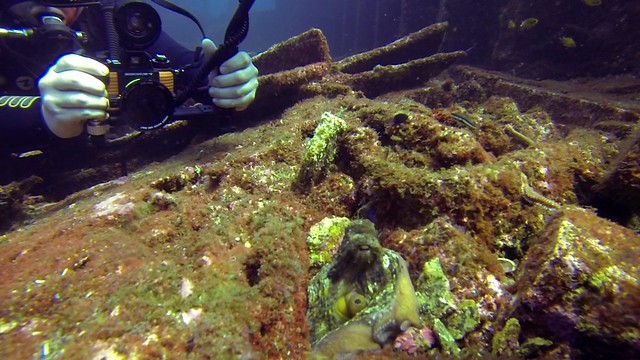 Octopus at Dori wreck, getting stalked by Alex 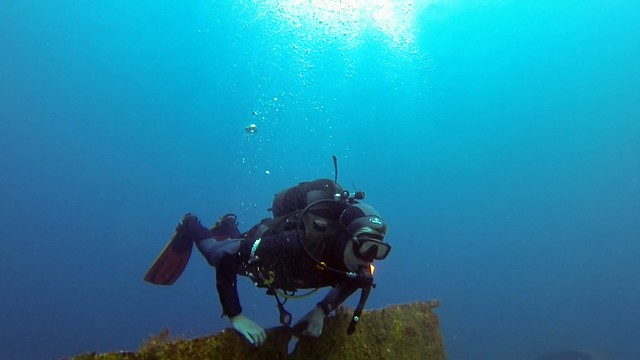 Diver chilling at the wreck

When climbing back into the boat, the strap holding my GoPro got caught on something and broke! The camera fell all the way down too quickly to catch it. Yet, with visibility being so good, Alex saw where it landed and once Bruno returned, they managed to go back and rescue it. It was a nail biting situation, because the boat was off the anchor and drifted from the spot, and there was very little air left in the tanks, and the whole thing was just way too dramatic. Bruno could just as well have said tough luck, turista, be more careful next time, but he actually went out to retrieve it together with Alex. Huge thanks!

That evening we went out with our friends from Toronto, Jobet and Diane, who just happened to be in the same place at the same time. We stayed on a farm, and they stayed right in Ponta Delgada, so they gave us a small tour of the city.

Time flies unusually fast when you’re in good company, and before we knew it, it was midnight already. While we didn’t worry about our scooters turning into pumpkins, we did need to get some rest before diving again the next morning. It was completely dark on our way back from Ponta Delgada. There was a light drizzle but it was still a great night ride. Apparently, majority of the expressway from the city is lit up quite well, and it did not feel sketchy at all 🙂

When in Toronto, I tend to get out of bed about an hour after the alarm rings (unless I have an early flight to catch 😉 ). Here in São Miguel I had no problem waking up even though there was a bit less than 8 hours of sleep the night before. It’s all about the right kind of motivation!

The first dive of the day was at a spot call Gold, so named after a patch of yellow sand on the shore opposite the underwater reef. Among the curious things we noted a spiky white star (previously only seen in a smooth red variety). 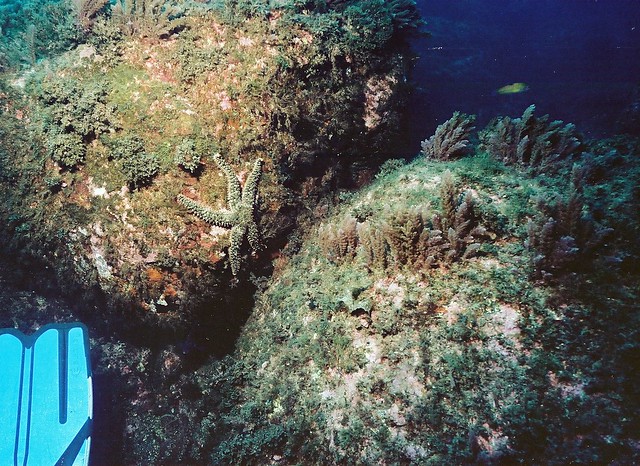 The starfish and the fin 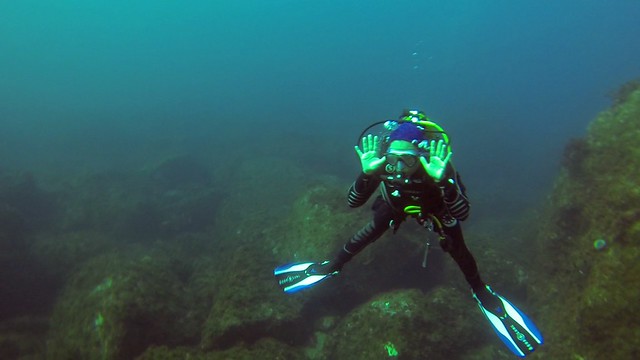 Suzi trying to blend in with other weird creatures

The second dive took us to the Caloura Arches. There are actual underwater arches that you can swim through. They are fairly large and take a little while to get across. Once on the other side of the aches, the sea floor is at a reasonable 20-25 m depth, and covered in porous volcanic rock. 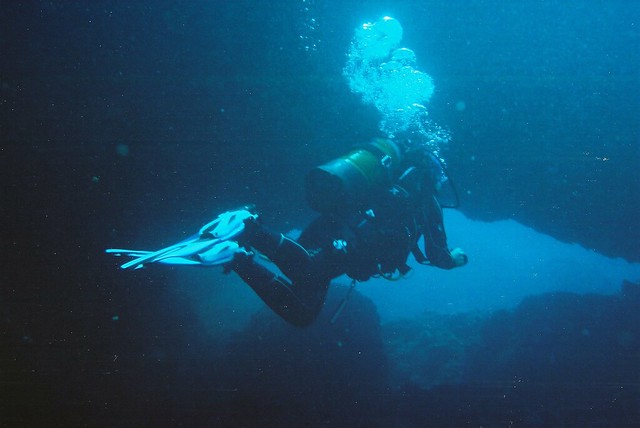 Going towards the arch

While the marine life was very similar to other locations, we had a more unique experience on our way back to the surface. The arches, like most volcanic rock, are very porous, and as the divers keep swimming underneath, the air they exhale gets trapped in the rock, only to be released slowly later. At the end of the dive as Alex and I were waiting by the anchor line during our safety stop, we could see the tiny air bubbles come up from all around the arches. It seemed as if the rock was generating them independently, as there were no divers underneath. It was only later on the boat that our dive master Bruno (who is a marine biologist, so must know what he’s talking about) explained the true meaning of this hypnotic sight. 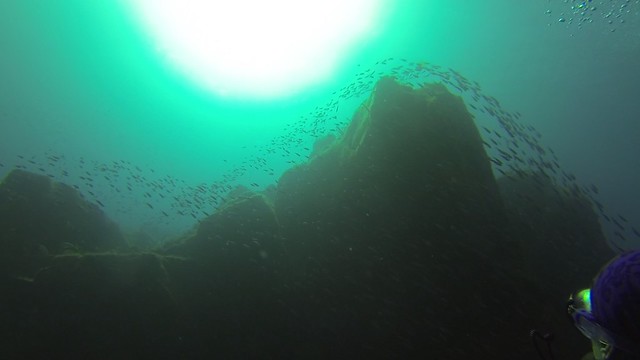 Another hypnotic sight: a swarm of fish passing by the underwater cliffs

After the dive, the weather seemed rainy and we did not want to go far and get stuck in a downpour. Instead, we headed to Santa Bárbara beach to watch the waves and surfers. With the soothing sound of the waves and the fatigue from diving, I almost drifted into sleep, right on that warm black sand.